Subjects: Others
View times: 124
Submitted by:

Emulsions are colloidal dispersions that consist of at least two immiscible fluids (normally water and oil), with one of them being dispersed in the other in the form of small droplets. The principles of emulsion science and technology are commonly employed in the food industry to create a wide variety of emulsified food products, such as beverages, milks, creams, dips, sauces, deserts, dressings, mayonnaise, margarine, and butter. The nature of emulsions confers these foods with distinct functional attributes, such as desirable appearances, textures, mouthfeels, and flavor profiles. Moreover, emulsions are a widely used vehicle for the encapsulation and delivery of bioactive agents, such as vitamins and nutraceuticals. Conventional emulsions are composed of numerous emulsifier-coated fluid droplets dispersed within another immiscible fluid medium. The dispersed droplets typically have diameters between about 200 nm and 100 μm. There is considerable scope for varying the properties of conventional emulsions by choosing different oil or emulsifier types, by incorporating different additives (such as thickening or gelling agents), by varying their droplet size distribution, or by manipulating their oil-to-water ratio.

Different physicochemical, sensorial, and nutritional attributes can be obtained using conventional emulsions. However, conventional emulsions do have limitations for some applications within the food industry. For instance, they are susceptible to breakdown through physical instability mechanisms, such as gravitational separation and droplet aggregation. Moreover, they have a limited ability to control the release profile of encapsulated ingredients. In addition, high fat contents are often needed to form oil-in-water emulsions with viscous or semi-solid textures, which is a drawback for creating reduced-calorie versions of some products. Recently, there has been growing interest in improving the healthiness, sustainability, and safety of foods in order to address some of the negative effects associated with the modern food supply, such as rising chronic diseases, environmental damage, and food safety concerns. In this context, there has been a trend toward the exploration of more advanced emulsion systems that have novel or improved functional attributes, such as reduced calories [1], controlled digestion behavior [2], and increased bioavailability of bioactives [3]. These advanced emulsions include a broad range of soft complex materials, including nanoemulsions, high internal phase emulsions (HIPEs), Pickering emulsions, multilayer emulsions, solid lipid nanoparticles, and multiple emulsions. 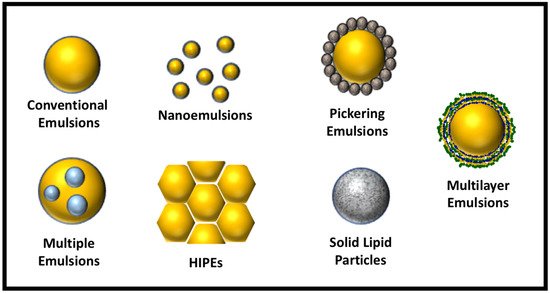 Nanoemulsions are similar to conventional emulsions except that they have droplet diameters that are smaller, ranging from around 20 to 200 nm. The small size of the droplets in nanoemulsions means that they have several potential advantages over conventional emulsions for specific applications, including better stability to gravitational separation and droplet aggregation, greater optical clarity, and higher bioavailability of encapsulated bioactive compounds.

Multilayer emulsions are similar to conventional emulsions but they contain multiple layers of materials adsorbed to the droplet surfaces, rather than a single layer of emulsifier.  The  composition, thickness, packing, and charge of the multilayers can be controlled by adding two or more different kinds of materials to the interfaces.  Typically, a charged emulsifier is used to form the first layer, and then oppositely charged biopolymers are added through a layer-by-layer electrostatic deposition method. The main advantages of multilayer emulsions are that they can be designed to have increased stability to heating, freezing, pH variations, high salt levels, chemical degradation, and gastrointestinal conditions.

Multiple emulsions, such as water-in-oil-in-water (W/O/W) emulsions consist of water droplets dispersed in oil droplets that are themselves dispersed in water droplets.  They are usually formed by homogenizing water and oil together with an oil-soluble emulsifier to form a W/O emulsion and then homogenizing this with water and a water-soluble emulsifier to form a W/O/W emulsion.  There are a number of potential advantages of these systems, including reduced fat, reduced bitterness, controlled release, triggered release, and protection from chemical degradation.

High Internal Phase Emulsions (HIPEs) are similar to conventional emulsions but they contain a very high  disperse phase content (typically > 73%), which means that the droplets are packed very close together and may become deformed.  These systems have semi-solid characteristics and therefore may be useful in applications where highly viscous, gelled or paste-like materials are required.

Solid lipid nanoparticles (SLNs) are similar to oil-in-water nanoemulsions, except that the lipid phase is crystalline.  They can be produced by making a nanoemulsion at high temperatures and then cooling it below the melting point of the fat.  The main advantage of SLNs is that they can protect encapsulated substances from chemical degradation and slow their release because the lipid phase is solidified, which reduces molecular diffusion.

Although conventional oil-in-water emulsions are currently the most widely used emulsions in the food industry, they are often susceptible to breakdowns over time or when exposed to certain environmental stresses during their production, transport, storage, or utilization. Additionally, they have only a limited capacity to encapsulate, protect, and deliver bioactive components. To this end, there have been major advances in the exploration of advanced emulsion technologies to extend, improve, or create novel functional performances in recent years. This review has focused on the major types of advanced emulsions currently available, including nanoemulsions, high internal phase emulsions, Pickering emulsions, multilayer emulsions, solid lipid nanoparticles, and multiple emulsions. The physicochemical principles and key technical information underlying the preparation of these advanced emulsions, the potential advantages and disadvantages of each of the systems, and the stabilization mechanisms have been discussed through various case studies.

Finally, we should state that advanced emulsions are often expensive and difficult to prepare and are sometimes more unstable than conventional emulsions. There is still a pressing need for commercially viable large-scale preparation procedures and materials for creating advanced emulsions. When applied to deliver bioactive compounds, advanced emulsions feature superior properties over conventional emulsions, associated with higher retention efficiency, increased stability to environmental stresses, improved bioavailability, and the ability to control or trigger the release. However, the full potential in delivering bioactives has still not been reached. Particularly, detailed information on the biological fate of advanced emulsions is still rather limited and is an area where further research is required. Overall, this review article may guide future trends in the development of novel strategies for the fabrication of advanced emulsions that are suitable for food applications.