Receptor tyrosine kinases (RTKs) have a similar molecular structure, with a ligand-binding site in the extracellular domain, a transmembrane region, and a cytoplasmic region that contains the protein tyrosine kinase (TK) domain with an ATP-binding site. Growth factors bind their specific extracellular domain and activate RTKs by inducing receptor dimerization, which, in turn, activates their autophosphorylation, thus initiating a cascade of downstream signaling events [4]. They are key regulators of critical cellular processes such as proliferation and differentiation, cell survival, metabolism, and migration.

Several studies have documented the importance of VEGF signaling in maintaining glomerular integrity [5][6][7]. In the glomerulus, VEGF is expressed and secreted by podocytes, which are highly differentiated visceral epithelial cells with foot processes, located on the urinary side of the glomerular basement membrane. VEGFRs are expressed on the surface of both endothelial cells and podocytes, even if the latter remains controversial [8][9][10][11][12]. Indeed, the autocrine effect of VEGF on the podocyte has been discussed. Bertuccio and Veron et al. have established that VEGFR2 is expressed in adult mouse podocytes and glomerular endothelial cells [10][13]. Müller-Deil et al. have identified VEGFRs in murine and human podocyte cell cultures [11], while Wang et al. have shown the expression and distribution of VEGFR2 both in endothelial cells and in podocytes by immune electron microscopy and immunofluorescence in human patients [9]. However, when Eremina et al. induced a podocyte-specific deletion of VEGFR2 in mice, they did not observe any effect on either glomerular development or function. They failed to detect any expression of VEGFR2 in podocytes [8].

This configuration allows a VEGF-mediated epithelial–endothelial crosstalk and contributes to the functional glomerular filtration barrier through survival, proliferation, and/or differentiation of the adjacent fenestrated glomerular capillary endothelial cells [14]. VEGF is known to exert bidirectional effects on podocytes, depending on its expression level. In adult mice, chronic VEGF knockout induced thrombotic microangiopathy (TMA) [6]. The best documented example for a pathological role of VEGF inhibition in the kidney is pre-eclampsia. Pre-eclampsia is a hypertensive disorder peculiar to pregnancy (4–5% of pregnant women). This systemic syndrome appears to originate in the placenta and is characterized by widespread maternal endothelial dysfunction, the presence of new-onset hypertension, and proteinuria or other end-organ damage occurring after 20 weeks of gestation [15]. The pathogenesis of pre-eclampsia relies on placental ischemia, abnormal spiral artery remodeling, and oxidative stress, leading to increased systemic levels of the circulating soluble form of VEGFR1 (also known as sFlt1, soluble Fms-like tyrosine kinase-1), an antagonist of VEGF, and PlGF [16][17]. Indeed, excess levels of the anti-angiogenic factor sFlt1 are associated with decreased circulating levels of VEGF and PlGF, resulting in maternal endothelial dysfunction, glomerular endotheliosis, and proteinuria, which may progress to thrombotic microangiopathy [15][18][19]. By contrast, podocyte VEGF overexpression induces collapsing glomerulopathy [10][14]. Renal expression of VEGF and its receptors is upregulated in patients with diabetic nephropathy, which induces new vessel formation in the kidney, stimulates renal hypertrophy, and causes proteinuria in experimental models [20][21]. An in vitro study showed that VEGF promotes podocyte survival through an autocrine pathway involving VEGFR2, inducing podocin upregulation and its association with CD2AP (CD2-associated protein), an adaptor molecule regulating podocyte actin polymerization [22]. Moreover, VEGFR2 interacts with nephrin, an adhesion protein and key regulator of podocyte survival via Akt signaling. Indeed, VEGFR2 is rapidly phosphorylated in response to VEGF and recruits the Src kinase Fyn, which binds to nephrin and initiates a cascade of phosphorylation, leading to actin cytoskeleton polymerization and actin stress fiber formation [13][23].

Solid tumor growth and metastasis spreading depend on angiogenesis. Various signals may trigger the angiogenic switch, for example, metabolic stress (hypoxia, low pH, or hypoglycemia), mechanical stress, immune/inflammatory response, and genetic mutations [24][25][26]. VEGF secreted by tumor cells stimulates endothelial cell proliferation and survival, leading to the establishment of new blood vessels [3]. Indeed, hypoxia regulates angiogenesis at every step of this process through multiple pathways, including VEGF. The master oxygen homeostasis regulators of this process are the hypoxia-inducing factors, HIFs. The founding member of this family is HIF-1α [27].

In 1971, Folkman introduced anti-angiogenesis as a new anti-cancer strategy [28]. However, only in 2004, the US Food and Drug Administration (FDA) approved bevacizumab, a humanized anti-VEGF monoclonal antibody, for metastatic colorectal cancer treatment [29]. To date, several anti-angiogenic therapies have been developed and approved to treat cancers and other activated VEGFR-related diseases.

These drugs can be classified into two categories: small-molecule inhibitors that target the ATP-binding site of RTK intracellular domain (tyrosine kinase inhibitor, TKI), and monoclonal antibodies (mAbs) that either interfere with the RTK extracellular domain or target the VEGF ligand (anti-VEGF) [1][30] (Figure 1). 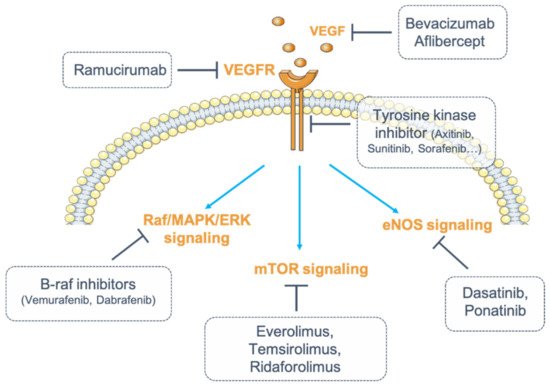 VEGF inhibitors through antibody binding include bevacizumab, ranibizumab, aflibercept, and ramucirumab. Bevacizumab and ranibizumab are monoclonal antibodies (mAbs), and aflibercept is a recombinant fusion protein that acts as a soluble decoy receptor or VEGF trap. Ramucirumab is a fully humanized mAb that specifically inhibits VEGFR2. Among these angiogenesis inhibitors, some are used either alone or in combination with chemotherapy, while most TKIs are multi-kinase inhibitors targeting VEGFRs and other RTKs simultaneously [31] (Table 1).