Polyunsaturated fatty acids (n-3 PUFAs) are long-chain polyunsaturated fatty acids with 18, 20 or 22 carbon atoms, which have been found able to counteract cardiovascular diseases. Eicosapentaenoic acid (EPA) and docosahexaenoic acid (DHA), in particular, have been found to produce both vaso- and cardio-protective response via modulation of membrane phospholipids thereby improving cardiac mitochondrial functions and energy production. However, antioxidant properties of n-3 PUFAs, along with their anti-inflammatory effect in both blood vessels and cardiac cells, seem to exert beneficial effects in cardiovascular impairment. In fact, dietary supplementation with n-3 PUFAs has been demonstrated to reduce oxidative stress-related mitochondrial dysfunction and endothelial cell apoptosis, an effect occurring via an increased activity of endogenous antioxidant enzymes. On the other hand, n-3 PUFAs have been shown to counteract the release of pro-inflammatory cytokines in both vascular tissues and in the myocardium, thereby restoring vascular reactivity and myocardial performance.

Nutraceutical supplementation is considered a viable approach for prophylaxis and treatment of heart diseases [1,2,3,4]. In particular, the efficacy of polyunsaturated fatty acids (PUFAs) in the treatment of various pathologies and, especially, of cardiovascular diseases is known since long time and a large body of clinical data on their protective effect has been collected over the last decades [5,6,7,8], though several pathophysiological implications on their use still remain unclear [9].
Humans and other mammals are not able to synthesize [10]. Therefore, linoleic acid (LA, 18:2, omega-6) and α-linolenic acid (ALA, 18:3, omega-3), denoted as essential fatty acids, must be included in the diet. Docosahexaenoic acid (DHA, 22:6 n-3) and eicosapentaenoic acid (EPA, 20:5 n-3) are members of n-3 PUFAs subfamily of PUFAs being obtained from the precursor ALA or dietary fish oils; ALA, in turn, can also be found in nuts and leafy vegetables. For the prevention of cardiovascular disease (CVD), a higher consumption of n-3 PUFAs is recommended. Indeed, many studies have shown that an increase in consumption of n-3 PUFAs leads to a decrease in cases of cardiovascular disease. In particular, it has been reported that eating fatty fish a few times a week halves coronary heart disease (CHD) deaths and reduces the probability of death from a heart attack by one third [11,12,13,14]. The beneficial effects of n-3 PUFAs are due to a set of various mechanisms of action. Indeed, they have an antiarrhythmic and antithrombotic action, reduce plasma triglyceride levels and resolve inflammatory states, regulate the expression of several genes and transcription factors, and act on membrane fluidity [15,16]. In many pathologies, free radicals (such as peroxynitrite) increase proinflammatory cytokines synthesis, regulate the cyclooxygenase (COX) pathway, and promote proinflammatory prostaglandin E2 (PGE2) synthesis [17]. In the treatment of these diseases, n-3 PUFAs fatty acids (ω-3) have the same effects as many antioxidants, in fact, they protect endothelial cells and cardiomyocytes from damage and cell death [18]. In addition to the collected evidence, demonstrating the beneficial responses of dietary n-3 PUFAs supplementation on the cardiovascular system, some concerns have been expressed about their potential detrimental effects in different tissues due to their potential pro-oxidant effect [19]. In particular, oxidative stress and n-3 PUFAs are strongly correlated. Long- or very long-chain fatty acids have many “fragile” double bonds between carbon atoms. Therefore, the n-3 PUFAs undergo lipid peroxidation during oxidative stress, generating highly cytotoxic reactive products [20]. This is particularly dangerous in the central nervous system (CNS) [21]. In particular, it is not clear whether or not exogenously given PUFAs have a safety profile which would allow for their extensive use in the general population. Based on these concerns, the European Food Safety Authority (EFSA) expressed its opinion and claimed that, for any population group, there is not enough data to establish a tolerable upper intake level for n-3 LC PUFA (DHA, EPA and Docosapentaenoic acid (DPA), individually or combined). Indeed, for the adult population, the supplemental intakes of EPA and DHA combined at doses up to 5 g/day, and additional intakes of EPA alone up to 1.8 g/day, do not raise safety concerns. Furthermore, for the general population, the supplemental intakes of DHA alone up to 1 g/day do not raise safety concerns [22].

An effect of n-3 PUFA fatty acids, which correlates with their antioxidant properties, is represented by counteraction of endothelial dysfunction, an effect which reduces arterial stiffness [29,30]. Endothelial dysfunction is determined by a reduction in endothelium-dependent vasodilation due to impaired nitric oxide (NO) bioavailability [31,32]. In fact, NO is the most important molecule for vasodilation, derived from the endothelium. In addition, NO has an anti-atherosclerotic action, reducing smooth muscle cell proliferation, platelet aggregation, and leukocyte adhesion [33]. It is known that an increase in oxidative stress induces endothelial dysfunction since ROS reduce NO bioavailability and increase synthesis of the most toxic species, i.e., peroxynitrite [34]. Changes in NO bioavailability cause procoagulable and prothrombotic conditions and vascular inflammation [35]. Important receptor-mediated cell signal transduction pathways, including the NO-cGMP pathway, are present in caveolae and lipid rafts of endothelial cell membranes [36]. n-3 PUFAs may regulate the caveolae composition resulting in increased NO production [37]. In particular, n-3 PUFA fatty acids stimulate endothelial nitric oxide synthase (eNOS) activity and expression [38]. Moreover, EPA determines a higher NO synthesis by increasing AMP-activated protein kinase (AMPK)-induced eNOS activation and eNOS dissociation from inhibitory scaffolding protein caveolin [39] (Figure 1). eNOS activity is also stimulated by DHA which favours the binding between eNOS and heat shock protein 90 (HSP-90), with activation of the PKB/AKt pathway. Thus, eNOS is phosphorylated and activated [18,40,41] and this represents the most relevant consequence of antioxidant-response elicited by supplementation with n-3 PUFAs. 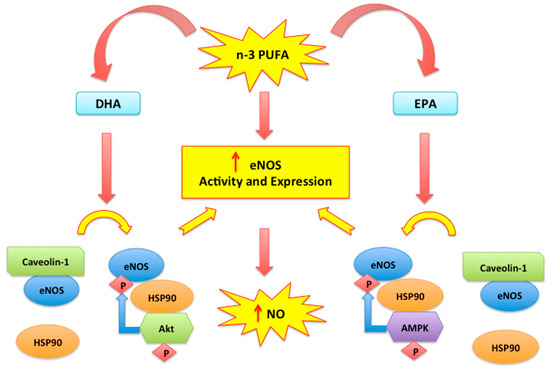 Figure 1. n-3 PUFA mediated eNOS modulation. n-3 PUFA (EPA and DHA) determine a higher NO synthesis by increasing eNOS activity and expression. The unbinding of eNOS/caveolin-1 complex and the recruitment of HSP-90 allow eNOS phosphorylation and activation mediated by Akt and AMPK [18,40,41].

Modulation of the cell membrane properties represents a supplemental molecular mechanism by which n-3 PUFAs lead to cardio-protective and vaso-protective response. In fact, linoleic acid and α-linolenic acid are fundamental constituents of cell membranes and are able to determine an impaired fluidity of membrane. Therefore, they determine and affect the behaviour of membrane-bound enzymes and receptors [42,43,44]. In particular, evidence has been collected showing that n-3 PUFAs inhibit both the interleukin (IL)-1, 2, 6 synthesis and the protein kinase C signalling pathway [45]. This correlates with studies showing that n-3 PUFAs interfere in various ways in inflammatory processes, inhibiting IkB phosphorylation and therefore the NF-kB signaling pathway, or through PPARα/γ, or through a ligand for GPR120, which reduces both TLR-4 and tumour necrosis factor alpha (TNF-α) signalling pathway [42,43]. Moreover, n-3 PUFAs regulate leukotrienes, prostaglandins and thromboxanes synthesis, through activation of cytosolic phospholipase A2 (cPLA2), cyclooxygenase 2, and production of PGE2, as a cPLA2 inhibitor, modify the metabolic pathway of arachidonic acid [17,18,46,47].

Maresins, protectins, and resolvins are called specialized pro-resolving mediators (SPMs). They derive from ω-3 and have anti-inflammatory properties [48].
It is known that atherosclerosis is an unresolved inflammatory pathology in which vascular wall damage occurs. This damage is likely to be caused by reduced synthesis of SPMs, therefore it is probable that an increase in SPMs could reduce the local inflammatory response and resolve the damage caused by atherosclerosis [49]. Numerous in vivo studies attest to the cardioprotective role of specialized pro-resolving mediators. Resolvin E series, such as RvE1, are synthesized from eicosapentaenoic acid and resolve acute inflammation states as they switch off leukocyte trafficking, favour the clearance of inflammatory cells and debris as well as inhibit cytokine synthesis [50,51,52,53]. In rats treated with RvE1, after I/R, myocardial infarct size was reduced by 70% compared to control group, when administered before reperfusion. In particular, the results demonstrate that RvE1 reduces heart damage by direct action on cardiomyocytes [54].
On the contrary, biosynthesis of D-series resolvin, maresins, and protectins starts with DHA. For example, PD1 protects against brain ischemia and renal I/R injury while Resolvin D1 (RvD1) is effective against I/R and atherosclerosis [55,56].
Even after an infarct, RvD1 administration resolves the acute inflammation as it stimulates the specialized pro-resolving mediator synthesis in the spleen and favours their transfer to the anti-inflammatory M2 macrophages in the left ventricle, preventing the onset of cardiac fibrosis and ensuring the normal heart function. Epoxides, such as epoxyeicosatetraenoic acids (EpETEs) and epoxydocosapentaenoic acids (EpDPAs), are obtained from EPA and DHA with reactions catalyzed by CYP450 monooxygenase and are termed lipid mediators. They perform an anti-inflammatory action in cardiovascular disease, dilate the pulmonary arteries, activate the smooth muscle of the coronary arteries, and provide an anti-arrhythmic action. For these reasons, studies have to be carried out regarding the inhibition of epoxide hydrolysis in order to render them stable and thus increasing their functionality in cardiovascular disease therapy [42,57,58] (Figure 2). 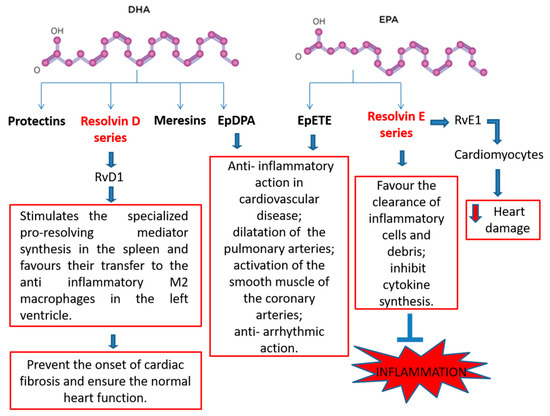