Lignin is a unique renewable aromatic resource in nature. In the past decades, researchers have attempted to breakdown the linkage bonds in lignin to provide aromatic platform chemicals that used to come from the petrochemical industry. In recent years, electrochemical lignin degradation under mild conditions has drawn much attention from the scientific community owing to its potential to scale up and its environmental friendliness. Sustainable electrochemical degradation of lignin consumes less energy and usually requires mild conditions, but low degradation efficiency and insufficient product selectivity are still significant challenges. The method for lignin degradation by reactive oxygen species (ROS) generated through the water oxidation reaction (WOR) at the anode and oxygen reduction reaction (ORR) at the cathode are more attractive for sustainable electrochemical degradation. The present contribution aims to review advancements in electrochemical degradation of lignin in aqueous or non-aqueous supporting electrolytes, focusing on the regulation of ROS in situ generated on the electrode.

At present, most of the carbon-containing bulk chemicals are transformed from non-renewable fossil resources, such as petroleum and coal, through a complicated conversion process, which brings a series of problems such as the greenhouse effect, climate change, and environmental pollution. According to the European Commission’s report “World energy, technology and climate policy outlook 2030 (WETO)”, the total world energy consumption would increase from 1.21 billion tons of oil equivalent (2010) to 1.45 billion tons of oil equivalent (2020), and up to 1.71 billion tons of oil equivalent by 2030. It is estimated that global carbon dioxide emissions will increase from 29.3 × 109 tons (2010) to 44.5 × 109 tons (2030), so the development and utilization of sustainable and renewable energy are imminent for contemporary people [1]. Lignin is the second most abundant component of lignocellulosic biomass after cellulose, and is the largest source of renewable aromatic compounds [2,3]. Therefore, a sustainable chemical industry based on lignin degradation to obtain aromatic platform chemicals has been proposed. Considering the complexity of the lignin molecular structure, the cleavage of the linkage bonds among the phenylpropane units during degradation is essential to improve product selectivity, which might simplify the subsequent separation process of the desired products [4,5,6]. Researchers have tried various methods, including pyrolysis, enzymatic processes, and chemical catalysis methods, to breakdown the linkage bonds in lignin [7,8,9], in which the degradation method with mild oxidant reagents (such as O2, H2O2) demonstrates good reaction selectivity in the cleavage of C–C/C–O bonds [10,11].

Electrochemical methods could be conducted under moderate conditions, such as relatively mild temperature, non-extreme pressure, and minimal needs for additional reagents. Lignin degradation by the electrochemical method has developed rapidly because of its controllable reaction and environmental friendliness. Researchers have tried to convert lignin to useful chemicals through oxidation on anode, reduction on the cathode or the combination of oxidation and reduction [12,13,14]. Several strategies have been proposed for the electrooxidative degradation of lignin: (1) the direct pathway that lignin is heterogeneously oxidized by an anode (for example, Ni [15,16], PbO2 [17,18], or RuO2 [19]) as or a catalyst immobilized on the surface of the electrode; (2) the indirect pathway that lignin is homogeneously oxidized by anode-generated hydroxyl radicals (*OH) through water oxidation reaction (WOR) at the anode or electrochemically recycled Red-Ox mediators (e.g., TEMPO [20,21], or NHPI [22,23]); and (3) the electrochemical–chemical combination pathway that lignin is oxidized by reactive oxygen species (ROS) generated at the electrode. Several ROSs, including hydroxyl radicals (*OH), superoxide radical anions (*O2−), and hydrogen peroxide/hydrogen peroxide anion (H2O2/OOH−), could be generated through WOR at the anode or ORR at the cathode under manipulated electrolysis conditions [24,25,26].

2. Degradation of Lignin and Lignin Model Compounds by ROS Generated in Situ in Aqueous Electrolytes

Electrochemical oxidation has been described as an effective alternative in wastewater treatment due to its mild treatment conditions and environmental friendliness [50]. Organics can be oxidized by the hydroxyl radicals (*OH) and other active oxygen species produced during the electrochemical reaction [51,52]. In the early studies, the direct electrooxidation method was employed to degrade lignin in aqueous electrolytes, mainly in a strong alkaline medium, in which the *OH generated near the anode was the oxidizing agent [53,54]. Typical linkage bonds in lignin, such as C–C bonds and C–O bonds, were reported to be cleaved with appropriate potential.

Many studies employed dimensionally stable anodes (DSA, e.g., IrO2 [55], PbO2 [56], SnO2 [57]) to oxidize lignin through *OH generated on the anode surface. IrO2-based electrodes (Ti/SnO2-IrO2, Ti/RuO2-IrO2, Ti/Ta2O5-IrO2, and Ti/TiO2-IrO2) were fabricated by overlaying the binary metal oxides on pretreated Ti substrates, and the Ti/RuO2-IrO2 electrode showed the highest stability and the most increased activity for lignin degradation under 500 mA/cm2, which was a large current that can be provided in the process of electrochemical degradation of lignin [12]. Additionally, PbO2-based electrodes were also applied in electrochemical degradation of lignin due to their high oxygen evolution potential (+2.0 V vs. SCE). Moreover, electro-hydrogenation, as well as electrooxidation, were designed in the electrochemical reaction system, in which lignin was firstly oxidized and cleaved into intermediates through the oxidation of *OH formed by β-PbO2 crystal on the electrode surface. Afterwards, these intermediates went through the electro-hydrogenation process at the cathodes (such as Ni, Cu, Cu/Ni-Mo-Co, alloyed Steel, Ti/Cu/Sn). In the above system, vanillin, syringaldehyde, acetosyringone, 3-hydroxy-4-methoxyphenyl-ethanone, and 4-methoxy-3-methyl-phenol were obtained as the degradation products [18,53,58,59,60,61]. Recently, Movil-Cabrera et al. [14] prepared a Co core/Pt partial shell nanoparticle alloy anode coupled with a Pt ring cathode to electrochemically degrade lignin, suggesting that the *OH generated from water electrolysis. A suggested mechanism on the Pb/PbO2 electrodes as follows:

It was reported that vanillin could be obtained by using Ni as anode under mild conditions [17]. The researchers investigated different shapes of Ni electrodes and found the apparent mass transfer coefficient was different. As shown in Figure 1, they found that the use of nickel electrodes with high surface area greatly enhanced the degradation percent of lignin under the same electrolysis conditions. Waldvogel et al. prepared a layer of electrochemical active NiO(OH) on Ni anode and used it to directly electrochemical oxidize lignin [62]. To increase the products selectivity on the Ni anode, a simple undivided high-temperature electrolytic cell for the electrooxidation of lignin at 160 °C has been designed recently. Under the optimized electrolysis conditions, the vanillin can be obtained with a yield of 4.2 wt%, which in high selectivity with 67% efficiency compared to the common nitrobenzene oxidation [63]. 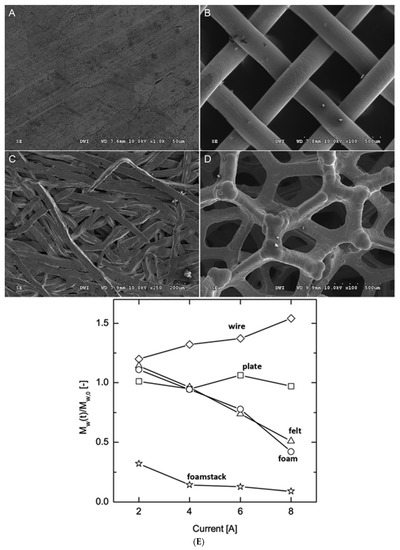 However, the degradation of lignin through electro-generated *OH on the anode is accompanied by a strong oxygen evolution reaction (OER). As a competitive reaction, OER inhibits the charge transfer of lignin on the electrode surface, requires a higher voltage to be applied, and may have a more significant impact on electrode corrosion. Additionally, it is supposed to be attributed to over-oxidation of degradation products to organic acids and CO2. To prevent over-oxidation and achieve the enrichment of the target products, Wessling et al. [64] attempted to design a new type of electrochemical membrane reactor. Combined with the in situ nanopore filtration method, the electrochemical oxidation products of lignin were removed from the oxidizing environment to achieve the effect of sustainable electrolysis (see Figure 2). Separation of low-molecular-weight (LMW) products by a tubular ceramic nanoporous filtration (NF)-membrane was shown to double the number of products isolated from Kraft lignin. 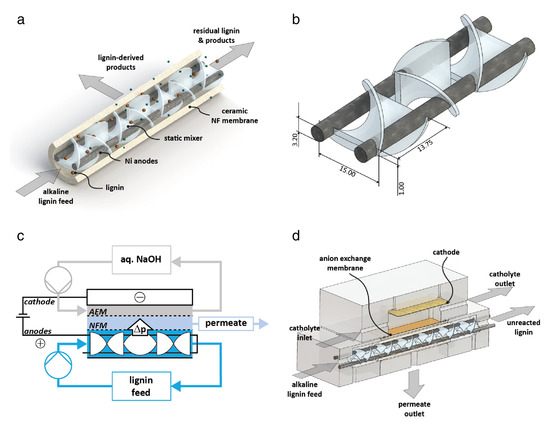 Figure 2. (a) Scheme of the electrochemical membrane reactor with in situ product removal for the electro–oxidative cleavage of lignin. (b) Detailed scheme of the electrode/mixer–unit, dimension are given in mm. (c) Process scheme of the complete experimental setup (AEM: Anion exchange membrane; NFM: Nanofiltration membrane). (d) Cross–section of the module. The inside of the ceramic membrane is used as the reactor, the volume between the ceramic and the ion–exchange membrane is used for the collection of the permeate and the cathodic work is only used to close the electrical circuit [64]. Copyright 2015, Elsevier.

In our previous research, ROS generated through the ORR process in an aqueous solution was introduced to degrade lignin [65]. A non-membraned cylindrical electrolytic cell with the inner layer of graphite felt cathode and the outer layer of a mesh RuO2-IrO2/Ti anode with lignin in alkali solution as an electrolyte was designed (Figure 3A), in which led to O2 evolution on the anode and O2 reduction to form H2O2 on the cathode. The degradation products were extracted by diethyl ether and the yield was calculated by the weight of the extractant. The yield of lignin degradation products after electrolysis for 1 h in this non-membraned cell was 10.1%, which was more than the sum of the yields in the anodic and cathodic chamber of a membrane cell (4.1% and 3.4%, respectively). The result implied that a synergic effect existed between the anodic and cathodic electrode reaction. It seems that the electrolysis conditions for producing a higher concentration of H2O2 and ROS were in favor of giving higher yields of LMW products. In another study, 59.2% of lignin was degraded into LMW products after 1 h-electrolysis at 80 °C under a current density of 8 mA/cm2 with extra O2. More than 20 kinds of lignin degradation products were identified, which originated from the over-oxidation during the degradation due to the strong oxidation capability of *OH, generated through the decomposition of H2O2 (Figure 3B) [66]. On the other hand, the electric quantity in this electrochemical reactor is decreased comparing with the others [53,54,57].

Several simple molecules with alkyl-O-aryl bonds, such as PBP (benzyl-O-phenol) and BPE (benzyl-O-phenyl), were used as lignin model compounds to study the mechanism of the bond cleavage during the electrolysis. By comparing the degradation yield and products of PBP and BPE, we deduced that the phenolic hydroxyl group in PBP might be the active site to be selectively attacked by ROS and finally trigger the cleavage of alkyl-O-aryl bond (as shown in Figure 3C). Based on several well-designed experiments, it was confirmed that the main ROS was *OH. The degradation rate and product yield displayed a good positive linear relationship with the concentration of the electro-generated *OH on the ORR cathode [67]. This result indirectly proves that, compared with a single electrode, the synergistic effect of anode and cathode greatly increase the degradation efficiency of lignin.