The traditional display technology features a cathode ray tube (CRT) based on the principle of a steered electron beam excitation of a fluorescent screen [1]. The structure of CRT is basically a vacuum tube with one or more built-in electron guns, which produce the electrons to be accelerated and steered. The steered electron beam excites one or more of the pixels on the screen designed to emit red, green, and blue (RGB), primary colors. By appropriate scanning, an image is produced on the phosphor pixelated screen. Since the invention of the first color CRT television (TV) in 1950, the CRT TV has dominated the display market for many decades because of its outstanding characteristics, such as excellent visual depth of field and high response rate. This dominance of CRT displays remained for a remarkably long time until the year of 2000, when two new display technologies, liquid-crystal display (LCD) and plasma display panel, were demonstrated [2,3,4][2][3][4]. Because of portability and power efficiency features, they are very popular with consumers. Later, owing to the continuous improvement in reducing the cost and performance improvements in the LCD technology, the plasma display shortly thereafter became uncompetitive. However, because LCD displays have major disadvantages, such as slow response time, poor conversion efficiency and low color saturation, the technology had been repeatedly criticized by consumers [5]. Consequently, the LCD manufacturers have taken steps to improve LCD displays, such as replacing the common liquid crystal materials with high response materials, using relatively larger conversion efficiency backlight modules, and utilizing high color saturation fluorescent materials. As a result, some high performance LCDs possess extremely short response times and thus are used in several virtual reality (VR) devices [6,7][6][7]. In recent years, new display technologies have become more mature, such as organic light-emitting diode (OLED) display and light-emitting diode (LED) displays [8]. The OLED display technology was developed in the 1990s. Compared with LCD displays, OLED displays have advantages, among which are self-luminous, wide viewing angle, high contrast, power saving, fast response, etc. [9,10][9][10]. However, due to limitations in material science and mass production capabilities, OLEDs are not as widely used in consumer electronics market as LCDs [11]. The LED-pixel based displays are mainly applied to large outdoor screens with the advantages of power saving, high color saturation and high brightness [12]. If LEDs are used as pixels of the display, the size of LEDs would need to be reduced according to the desired resolution. Because a growing number of manufacturers regard the LED display as the next- generation display technology, the onset of mini-LED and micro-LED has been triggered [13]. The comparison between mini-LED and micro-LED is shown in Table 1. The size of mini-LEDs is about 100~200 µm, which is between the size of conventional LEDs (>200 µm) and micro-LEDs (<100 µm).
Table 1. Comparison between mini-LED and micro-LED.
JDI, a Japanese manufacturer, demonstrated an automotive central control panel based on a 16.7 inch curved screen with a straight down type mini-LED backlight at 2018 SID Display Week, shown in Figure 7a [21]. The contrast and color of the screen can be presented perfectly even in complex situations because of the local dimming with 104 dimming zones in the screen. BOE, one of the largest display makers in China, exhibited a 27-inch ultra-high-definition (UHD) panel, which used a mini-LED backlight with 1000 local dimming zones. Its brightness is up to 600 nits and its contrast is up to 1,000,000:1. In addition, BOE also showed a 5.9-inch mobile phone panel which was only 1.4 mm in thickness, shown in Figure 7b [21].

As H. X. Jiang’s group in Texas Technique University reported the first fabrication of micro-LED chip with diameter of 12 µm in the year of 2000 [22,23[22][23][24],24], micro-LED has become a hot topic soon after the inception.
The application field of LEDs varies depending on the chip size. Due to the size difference, the traditional LED chip is mainly used in general lighting [25,26,27][25][26][27] and display backlight module [28]. The mini-LED is applied to backlight applications such as HDR and flexible displays [18], while the micro-LED is suitable for applications such as wearable watches, mobile phones, automotive head-up displays, AR/VR, micro projectors, and high-end televisions [29] (Table 2). Additionally, micro-LED can be combined with a flexible substrate to realize the flexible characteristics like OLED [30]. Therefore, micro-LED displays have the potential to match or exceed today’s OLED displays, with its high contrast, low power consumption, high brightness, and especially the high life-span [31].
Table 2. Requirements for mini-LED and micro-LED in typical applications.
According to the Research and Markets, a market research institution, the global micro-LED display market is predicted to soar from USD 0.6 billion in 2019 to USD 20.5 billion in 2025, with a compound annual growth rate of about 80% [14]. The main reason for the market outbreak is the sharp increase in demand for brighter and more energy-efficient display panels, needed for surging devices such as smart watches, mobile phones, TVs, laptops, augmented reality (AR) and VR. According to Yole’s optimistic estimate, the market of micro-LED display will reach 330 million units by 2025 (Figure 1) [15]. Although the prospects of market are highly optimistic at present, micro-LED displays still face technological challenges, especially in the cases for which some key technologies and process equipment have not yet been made sufficiently developed. Therefore, the relatively mature mini-LED is expected to be the first commercialized variety while the micro-LED display technology is still in its nascent state. 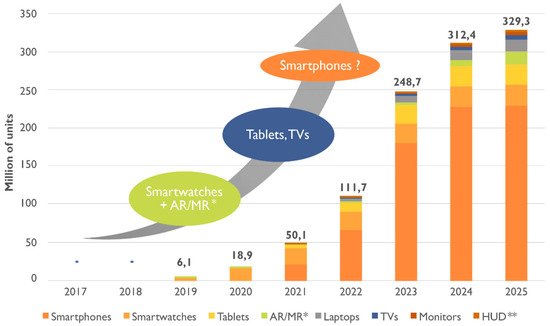 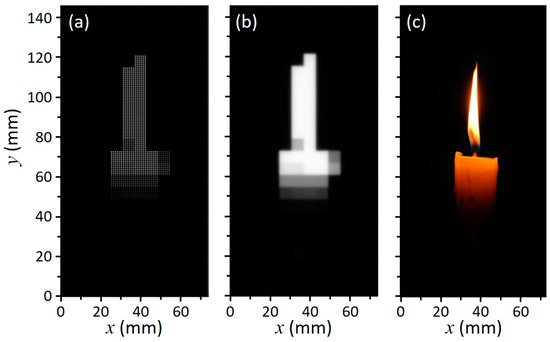 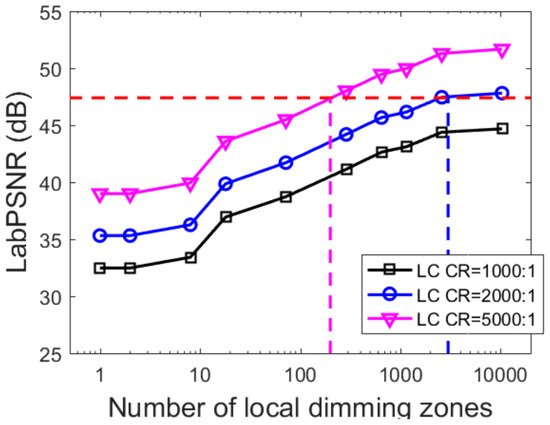 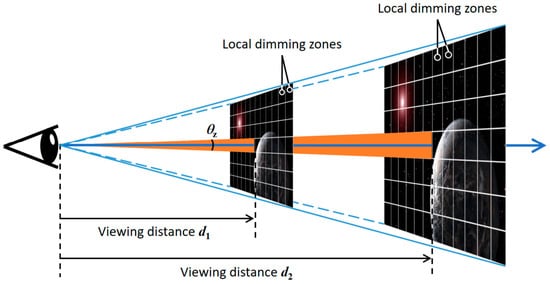 Figure 6. The 27” gaming monitor and the 2” VR display of AUO.
,33,34][32][33][34] and the full-color method for display applications [35,36,37][35][36][37]. With the rapid development of some transfer printing approaches summarized in Table 3, the first problem is expected to be effectively solved. Thus, we will focus on methods of fabricating the full-color display for micro-LEDs.
Table 3. Massively selective transfer printing methods.
At present, the micro-LED display technology still faces some challenges, like the transfer printing of micro-LED chips for mass production [32