Submitted Successfully!
Thank you for your contribution! You can also upload a video entry related to this topic through the link below:
https://encyclopedia.pub/user/video_add?id=967
Check Note
2000/2000
Asteraceae Paradox
Edit
Upload a video
This entry is adapted from 10.3390/insects11050304

Excessive pollen harvesting by bees can compromise the reproductive success of plants. Plants have therefore evolved different morphological structures and floral cues to narrow the spectrum of pollen feeding visitors. Among “filtering” mechanisms, the chemical and mechanical protection of pollen might shape bee-flower interactions and restrict pollen exploitation to a specific suite of visitors such as observed in Asteraceae. Asteraceae pollen is indeed only occasionally exploited by generalist bee species but plentifully foraged by specialist ones (i.e., Asteraceae paradox). During our bioassays, we observed that micro-colonies of generalist bumblebee (Bombus terrestris L.) feeding on Taraxacum pollen (Asteraceae) reduced their pollen collection and offspring production. Bees also experienced physiological effects of possible defenses in the form of digestive damage. Overall, our results suggest the existence of an effective chemical defense in Asteraceae pollen, while the hypothesis of a mechanical defense appeared more unlikely. Pre- and post-ingestive effects of such chemical defenses (i.e., nutrient deficit or presence of toxic compounds), as well as their role in the shaping of bee-flower interactions, are discussed. Our results strongly suggest that pollen chemical traits may act as drivers of plant selection by bees and partly explain why Asteraceae pollen is rare in generalist bee diets.

Through pollen collection, bees act concurrently as effective pollinators and herbivores, since both larvae and adults feed exclusively on pollen and nectar [1][2]. Like other herbivorous insects, bees display a high diversity of interactions with their host plants, from strict specialization (i.e., oligolecty, where bees collect pollen from flowers of a single genus, subfamily, or family) to broad generalization (i.e., polylecty, where bees exploit flowers of more than one plant family) [3][4][5]. Regardless of floral specialization, bees display numerous adaptations to discriminate among plant species and to enhance floral resource foraging [1][6][7][8], which can compromise the reproductive success of plants. For instance, bees can remove 95.5% of the pollen produced by flowers of Campanula rapunculus (Campanulaceae) [9] and some solitary species require the entire content of more than 30 flowers, even more than 1000 flowers, to feed a single larva [7]. In response to excessive pollen harvesting, flowering plants have drawn up complex defense mechanisms and adaptations. In fact, flowers have evolved several morphological traits that can be viewed as adaptations preventing excessive pollen harvesting by bees, such as heteranthery, nototribic flowers (i.e., dorsal anthers hidden in the upper lip of the flower, such as in Lamiaceae), keel flowers (i.e., ventral anthers hidden in a boat-shaped keel formed by the fusion of the two lower petals of the flower, such as in Fabaceae), floral tubes, poricidal anthers and progressive pollen release (reviewed in [8]).

Selection may also act on pollen traits to narrow the spectrum of pollen feeding visitors. For instance, although Asteraceae are ubiquitous in most temperate habitats [10], they are only occasionally exploited by polylectic species such as Bombus [11][12] and Colletes [4] (i.e., Asteraceae paradox [4]). This Asteraceae avoidance cannot be explained by complex floral morphology, since compound inflorescences ensure an easy access to both pollen and nectar over an extended time period [4]. The failure of several unspecialized bee species to develop on Asteraceae pollen rather suggests that it may possess unfavorable or protective properties so that bees might require physiological adaptations to use it [13][14][15][16][17][18][19]. Although Asteraceae pollens are known to have low protein content, this is seemingly not the only reason for the inadequacy of their pollen [20]. The pollen may actually lack other essential nutrients, contain toxins, or display a low digestibility [4][13][17][20][21][22]. Such pollen protections probably shape bee–flower interactions to lead to a narrowing of the spectrum of pollen-feeding visitors in Asteraceae.

It is largely assumed that the synthesis of secondary metabolites constitutes a complex system of chemical defenses in plants against herbivorous insect attacks [23][24]. Although these chemical compounds are mainly studied in vegetative parts, some obviously occur in nectar and pollen of flowering plants, with bee pollinators then exposed to their biological activities [24][25][26][27][28][29][30][31][32]. For instance, sesquiterpene lactones are characteristic secondary metabolites in Asteraceae [33], with high chemotaxonomic specificity [34]. Although they probably have evolved as defense through their deterrence to herbivores [35], they also occur in pollen [36] and may display insecticidal activities [37]. Among chemical defenses, constraints could also act through nutrient availability. Although proteins are often regarded as a reference in terms of nutritional quality, lipids are also important [38][39][40][41], including sterols, essential compounds in bee physiology (e.g., pupation, ovary development) that are exclusively exogenous [42][43]. The fact that ∂7-sterols often occur in Asteraceae pollen in higher proportions than more common and usable sterols (i.e., 24-methylenecholesterol, ß-sitosterol, and ∂5-avenasterol) may indicate a defense mechanism against excessive pollen harvesting [22]. In addition to these variations of pollen primary and secondary metabolites, pollen also varies in its wall resistance properties, which may result in incomplete digestion. Transmission electron microscopy has revealed that Asteraceae pollen possesses a thick multilayer wall [44], which might inhibit the extraction of nutrients and act as a mechanical defense [17][21]. Despite these hypotheses, it is unclear why Asteraceae pollen is unsuitable for most bee species and the Asteraceae paradox remains unsolved. In the present study, bumblebee micro-colonies (Bombus terrestris L.) were forced to feed on different diets (Figure. 1) to investigate the unfavorable properties of Taraxacum pollen. From the observed patterns in foraging behavior, larval development, and digestive damages, we infer possible mechanical or chemical protective properties of Asteraceae pollen. 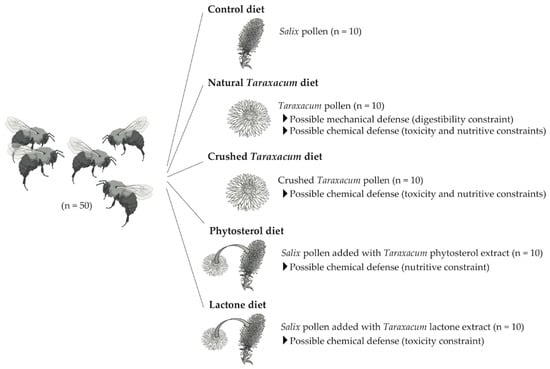 Figure 1. Experimental design and summary of diet treatments provided to B. terrestris. Each micro-colony consisted of 5 workers fed for 35 days. Mortality, offspring production, and resource collection (i.e., pollen and syrup) were monitored during or at the end of the bioassays.

More
© Text is available under the terms and conditions of the Creative Commons Attribution (CC BY) license; additional terms may apply. By using this site, you agree to the Terms and Conditions and Privacy Policy.
Upload a video for this entry
Information
Subjects: Ecology
Contributor MDPI registered users' name will be linked to their SciProfiles pages. To register with us, please refer to https://encyclopedia.pub/register :
Maryse Vanderplanck
View Times: 307
Revisions: 3 times (View History)
Update Time: 02 Nov 2020
Table of Contents
1000/1000
Hot Most Recent