Submitted Successfully!
Thank you for your contribution! You can also upload a video entry related to this topic through the link below:
https://encyclopedia.pub/user/video_add?id=93
Check Note
2000/2000
Treatment of Mitochondrial Neurogastrointestinal Encephalomyopathy
Edit
Upload a video

Mitochondrial neurogastrointestinal encephalomyopathy (MNGIE) is an autosomal recessive disorder  caused by mutations in the nuclear TYMP gene, which encodes for thymidine phosphorylase, an enzyme required for the normal metabolism of deoxynucleosides, thymidine, and deoxyuridine. The subsequent elevated systemic concentrations of deoxynucleosides lead to increased intracellular concentrations of their corresponding triphosphates, and ultimately mitochondrial failure due to progressive accumulation of mitochondrial DNA (mtDNA) defects and mtDNA depletion. Currently, there are no treatments for MNGIE where effectiveness has been evidenced in clinical trials. A Phase 2, multi-centre, multiple dose, open label trial without a control will investigate the application of erythrocyte-encapsulated thymidine phosphorylase (EE-TP) as an enzyme replacement therapy for MNGIE. Three EE-TP dose levels are planned with patients receiving the dose level that achieves metabolic correction. The study duration is 31 months, comprising 28 days of screening, 90 days of run-in, 24 months of treatment and 90 days of post-dose follow-up. The primary objectives are to determine the safety, tolerability, pharmacodynamics, and efficacy of multiple doses of EE-TP. The secondary objectives are to assess EE-TP immunogenicity after multiple dose administrations and changes in clinical assessments, and the pharmacodynamics effect of EE-TP on clinical assessments.

Elevated systemic concentrations of these deoxynucleosides lead to increased intracellular concentrations of their corresponding triphosphates. This perturbs the physiological equilibrium of the deoxynucleoside triphosphate pools within the mitochondria, thereby interfering with the normal replication of mitochondrial mtDNA, leading to multiple deletions, somatic point mutations and depletion of mtDNA [5][8][10][11], and ultimately mitochondrial failure [5][6][8]. It is believed that the consequent failure of cellular energy production directly causes the cardinal clinical manifestations through damage to the nervous and muscular systems.

Patients with MNGIE usually present during the second decade of life, although patients have presented as early as five months and as late as the fifth decade; the average age at diagnosis is 18.5 years[12] . The relatively late onset for a condition present at birth is thought to be due to the progressive accumulation of mtDNA defects, with the disease becoming apparent once the number of affected mitochondria reaches a critical threshold level. The disease is a multi-system disorder, and has a characteristic, although by no means universal, clinical presentation. Patients typically present with gastrointestinal symptoms including early satiety, nausea, dysphagia, gastroesophageal reflux, postprandial emesis, episodic abdominal pain, episodic abdominal distention, and diarrhoea. These symptoms are secondary to alimentary dysmotility caused by degeneration of the alimentary autonomic nervous system [2]. Patients generally have a thin body habitus with reduced muscle mass and cachexia. Episodes of frank intestinal pseudo obstruction may occur, and some patients develop a hepatopathy with liver steatosis and cirrhosis. Progressive external ophthalmoplegia and peripheral sensorimotor polyneuropathy are invariable. The latter affects the lower limbs initially and is typically demyelinating. On magnetic resonance imaging (MRI) there is, in the majority of cases, leukoencephalopathy with diffuse increased T2 signal in the deep white matter of the cerebral hemispheres, but this is generally believed to be asymptomatic[5][12].

MNGIE is a progressive disease, with patients dying at an average age of 37.5 years, and at present there are no approved therapies [4]. Allogeneic hematopoietic stem cell transplantation (HSCT) offers the possibility of a permanent correction of the thymidine phosphorylase deficiency. However, it is still highly experimental, carrying a mortality rate of approximately 63%[13] . Treatment with allogeneic HSCT is limited by the availability of a matched donor, and patients are often in poor clinical condition with impaired capacity to tolerate transplant related problems and the aggressive conditioning and immunosuppressive chemotherapy[13][14]. The administration of HSCT to patients with MNGIE presents pharmacological challenges in terms of administering drugs with possible mitochondrial toxicity, and the requirement for parenteral administration due to disturbed gastrointestinal function and impairment of absorption. A published consensus proposal for standardising an approach to allogeneic HSCT in patients with MNGIE recommends restricting the recruitment of patients with an optimal donor to those without irreversible end stage disease[13][14]. Patients who are oligosymptomatic are often reluctant to undergo HSCT due to its high mortality risk. Many patients are therefore ineligible for this treatment option and clinical management is based on symptom relief and palliation. A second experimental permanent treatment approach for MNGIE is orthotopic liver transplantation. Sustained normalisation of plasma thymidine and deoxyuridine concentrations have been reported in two patients who received liver transplantation [15]. A longitudinal evaluation of additional transplanted patients, however, is essential to confirm the clinical efficacy of this treatment approach. There is thus a critical requirement to develop an alternative treatment for these patients which would provide an expeditious normalization of nucleosides to prevent as much mitochondrial damage as possible.

The Investigational Medicinal Product under investigation in this study is erythrocyte encapsulated thymidine phosphorylase (EE-TP), which is produced under Good Manufacturing Practice by the ex vivo encapsulation of recombinant Escherichia coli thymidine phosphorylase into patient’s autologous erythrocytes using an automated red cell loader device [16]. EE-TP is intravenously infused into the patient where it aims to correct the fundamental lesion in MNGIE by replacement of the deficient thymidine phosphorylase. The rationale for the development of EE-TP is based on thymidine and deoxyuridine being able to diffuse across the erythrocyte membrane via nucleoside transporters into the cytosol where the encapsulated enzyme catalyses their metabolism to the normal products, thymine and uracil, respectively (Figure 1). The products then exit the cell into the blood plasma where they are further metabolised as normal. It is proposed that regular intravenous (IV) administrations of EE-TP to patients with MNGIE will lead to a sustained reduction or elimination of plasma thymidine and deoxyuridine, leading to a clearance from the cellular compartments and thus an amelioration of the intracellular deoxynucleotide imbalances. This should prevent further damage to mtDNA. By relieving the nervous system and muscle of the toxic effects of the accumulated metabolites, EE-TP aims to arrest and reverse the progression of the clinical disease. 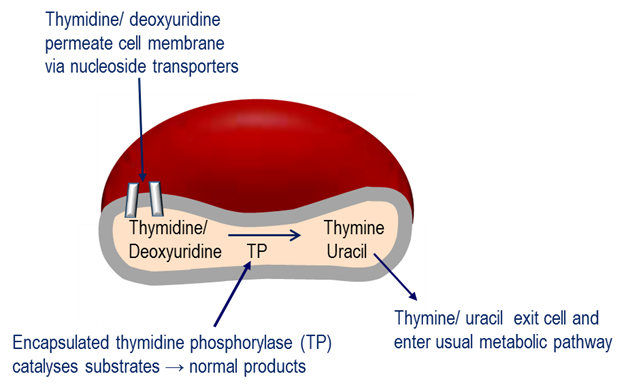 EE-TP has the advantage of prolonging the circulatory half-life of the enzyme to that of the erythrocyte half-life (19 to 29 days) and minimising immunogenic reactions, which are often observed in enzyme replacement therapies administered by the conventional route.

Clinical experience with EE-TP is limited to a proof-of-concept study in a single patient diagnosed with MNGIE and a compassionate clinical evaluation in 4 patients with MNGIE [17][18][19]. EE-TP was well tolerated and reductions in the disease-associated plasma metabolites, thymidine and deoxyuridine, were observed in all patients. Clinical improvements were observed in three patients who received long-term treatment, suggesting that EE-TP is able to reverse some aspects of the disease pathology.  Transient, non-serious adverse events were observed in two of the five patients; these did not lead to therapy discontinuation and were managed with pre-medication prior to infusion of EE-TP.

The aim of this study is to investigate the safety, tolerability, pharmacodynamics, and efficacy of EE-TP in patients with MNGIE. We hypothesise that treatment with EE-TP will arrest and reverse the progression of the clinical disease. The study protocol reported here (version 6.0) was written in compliance with the Standard Protocol Items: recommendations for Interventional Trials (SPIRIT) 2013 [20].  The sponsor, St George’s, University of London requested scientific assistance for EE-TP and the current protocol was updated in line with the European Medicines Agency (EMA) advice provided. The study will be conducted in accordance with the following and all subsequent amendments: i) ICH E6: Good Clinical Practice: Consolidated guideline Committee for Proprietary Medicinal Products (CPMP)/ICH/135/95 (July 1996), adopted in the EU by CPMP, ii) European Commission Directive 2001/20/EC (April 2001), iii) European Commission Directive 2003/94/EC (October 2003), iv) European Commission Directive 2005/28/EC (April 2005), v) Manufacture of Investigational Medicinal Products: Volume 4, Annex 13 of the EU Guidelines to GMP (February 2010) and vi) The Medicines for Human Use (Clinical Trials) Regulations 2004 and all subsequent amendments.

More
©Text is available under the terms and conditions of the Creative Commons-Attribution ShareAlike (CC BY-SA) license; additional terms may apply. By using this site, you agree to the Terms and Conditions and Privacy Policy.
Upload a video for this entry
Information
Subjects: Allergy
Contributor MDPI registered users' name will be linked to their SciProfiles pages. To register with us, please refer to https://encyclopedia.pub/register :
Bridget Bax
View Times: 600
Revisions: 3 times (View History)
Update Time: 28 Oct 2020
Table of Contents
1000/1000
Hot Most Recent