Submitted Successfully!
Thank you for your contribution! You can also upload a video entry related to this topic through the link below:
https://encyclopedia.pub/user/video_add?id=912
Check Note
2000/2000
Video Game Live Streaming
Edit

In recent years, the online broadcast industry has developed rapidly with the emergence of various live streaming platforms, such as Twitch, YouTube, Douyu, Huya, and so on. Twitch (www.twitch.tv) and YouTube Gaming (gaming.youtube.com) had more than 470 million regular visitor members in 2016 (more than 50% of gamers in the US, Europe, and Asia Pacific) [1]. By the end of 2018, at least 1 million people were watching live streaming on Twitch at any time, and the total duration of viewing time on the platform was recorded at 434 billion minutes. In addition, the number of streamers on Twitch increased from 2 million in 2017 to 3 million in 2018, with nearly 500,000 streamers visiting this platform daily [2]. The addiction to video game live streaming has also raised concerns. In the area of mental health, Internet addiction has been described as a disorder in which individuals use the Internet excessively [3]. Addiction to online gaming has been included separately in the fifth edition of Diagnostic and Statistical Manual of Mental Disorders as a tentative disorder [4]. Problematic use of online gaming has become a popular topic of academic concern. However, the relevant research is  few about video game live streaming use and various psychological variables.

Video game live streaming users can be divided into streamers and audiences. The main difference between them is that the former produce information or content, while the latter receives or consumes it [5]. The streamers display game skills through live streaming, while audiences can watch and learn the game through live streaming. The two parties can interact by communicating, rewarding, subscribing, and so on. Accordingly, studies on user behavior are summarized in three aspects: effect factor on streamer participation in live streaming, effect factors on audience watching live streaming, and effect factors on their interactive behavior (chat, reward, subscription, etc.). Zhao et al. [6]argued that performance expectation from the platform and perceived website attractiveness could significantly promote streamers’ willingness to continue streaming. Based on the theory of “Use and Satisfaction”, Sjöblom and Hamari [7] divided audience demands to watch live streaming into five categories: cognition, emotion, personal integration, social integration, and stress release. Gros et al. [8] found that the audience rewards intention was influenced by the number of viewers and watching duration. In addition, this article believed that the environmental factor plays an important role in the behavior of live streaming users. Therefore, the category of “platform impact” was added to the previous classification.

In summary, this article divided the main issues into four types: streamer demand, audience demand, user interaction behavior, and platform impact. This classification referred to studies by Zimmer et.al [5] and Scheibe et.al [9], who divided user behavior into three categories: streamers who produced videos;  audiences that watched the videos; the chats and rewards between the two groups. This article believed that the environmental factor plays an important role in the behavior of live streaming users. Therefore, the category of “platform impact” was added to the previous classification. These four main topics would be highlighted in the following text, and on the basis of these issues the research framework of video game live streaming could be built. This is presented in Figure 1. 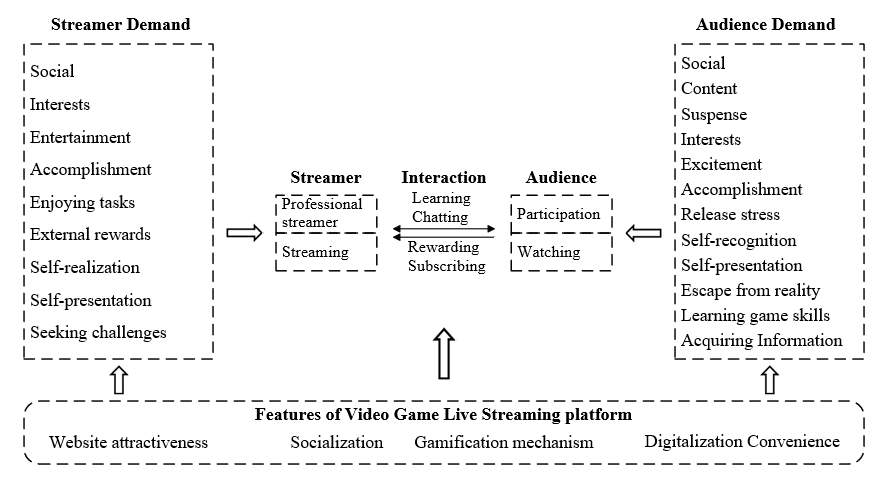 Video game live streaming users are divided into two groups, streamer and the audience, and the differences between them are related to information production and reception [5]. Streamers are the producers of live streaming. They record and publish real-time video [9] with their own mobile devices (such as smart phones, tablets, and desktop computers) [5][13][14]. As aforementioned, streamers can display game skills, teach game strategies, and manage their self-image by chatting with audiences on the platform [15], such as expressing their interests and attitudes towards life. Audiences are consumers of live streaming and they watch the content on mobile devices or desktop computers. Live streaming platforms enable audiences to chat with streamers and other consumers, reward streamers, subscribe to the live streaming channels [5][13], as well as acquire information and learn skills related to that game [16]. Therefore, when considering users who are addicted to live game play, streamers and audiences should be considered separately.

There are three main features of video game live streaming mentioned in the existing literature:

First, live streaming is performed in real-time; that is, streamers share online videos of playing game [17] while audiences watch those same videos concurrently. In other words, production and consumption of real-time videos are completed at the same time [5]. In addition, streamers and audiences can also communicate with each other simultaneously. Generally, the platform will display the screen of the streamer playing games and chatting with the audience in real time [16]. Therefore, video game live streaming is a real-time video media.

Second, the activity is highly conducive to sociability; that is, live streaming is a type of social media [5][15][17]. Similarly, video game live streaming is also social. Hamilton et al. [17] explained that social interaction was the experience of participating in major activities. Therefore, these studies situated Twitch communities in line with McMillan and Chavis’ concept of the “sense of community,” which comprised the four aspects of “membership, influence, fulfillment of demands, and emotional connection” [18]. In view of this, this paper regards user interaction in live streaming as a social activity. Streamers and audiences can interact by chatting, giving rewards, subscribing, and learning online game skills from each other [19]. In addition, Fietkiewicz and Stock [13] also proposed that the design of the gamification mechanism on video game live streaming platform strengthened the interaction between streamers and audiences, such as rewards, ratings, badges, and other gamification mechanisms.

The third feature is the dissemination of suspense; that is, compared to traditional media (in which most of videos are recorded in advance, such as on iQIYI and Tencent Video), video game live streaming has the characteristics of suspense. For example, online games and other activities with a competitive nature encapsulate high moments, low moments, and a suspenseful result, whereas when watching pre-recorded media, the result is fait accompli, making content less engaging because of spoilers or a pre-determined outcome [20]. Wulf et al. [21] agreed that compared to watching pre-recorded video (such as a TV series or a movie), audiences might be affected by the excitement and suspense while hoping the streamer win the game or complete the challenge.