Submitted Successfully!
Thank you for your contribution! You can also upload a video entry related to this topic through the link below:
https://encyclopedia.pub/user/video_add?id=9048
Check Note
2000/2000
Nanojoining
Edit
Upload a video

Nanojoining is the process of joining two or more surfaces together using nanomaterials as the primary building blocks. This includes, but is not limited to, nanosoldering, nanobrazing, nanowelding, nanoscale diffusion bonding, and additive manufacturing. Note that, like with conventional soldering and brazing, only the filler metal undergoes melting, not the base material. Nanomaterials are materials in which at least one dimension 100 nm or less and include 0-D (e.g. nanoparticles, 1-D (e.g. nanowires and nanorods), 2-D (e.g. graphene), and 3-D (e.g. nanofoam) materials. Nanomaterials exhibit several notable properties that allow joining to occur at temperatures lower than the melting temperature of their bulk counterpart. For example, the melting temperature of Ag is 961.78 °C, but Ag nanomaterials begin to melt at a much lower temperature that is dependent depending on the size and shape. These properties include high surface area to volume ratio, the Gibbs-Thompson effect, and high surface energy. The low joining temperature of nanomaterials has been exploited numerous times for flexible electronics, printable electronics, and soldering applications; only within the last two decades have they been explored for high-temperature joining applications (>450 °C).

Nanojoining involves the use of nanomaterials (NMs; <100 nm) as a filler metal [1]. Particle-based joining allows additional freedom when working with processes such as additive manufacturing, printable electronics, and crack repair[2]. Nanoparticles have been so attractive as a lower temperature alternative to many conventional materials due to several unique properties. The first of which is size-dependent melting point depression of nanoparticles (NPs) seen in Figure 1. This melting point depression is caused by the Gibbs-Thomson effect [3]. The equation governing the Gibbs-Thomson effect (Equation 1) describes the melting point for an isolated spherical particle (\( T_{MP} \)) with a diameter, d. \( T_{mB} \) is the bulk melting temperature, \( \sigma_{sl} \) is the solid-liquid interface energy, \( H_f \) is the bulk enthalpy of fusion and \( \rho_{s} \) is the molar volume of the solid. At this time, there has not been a firmly established Gibbs-Thomson equation for nanowires, nanoplates, and other non-spherical nanomaterials [5]. The Gibbs-Thomson equation was derived by equating the chemical potential of a liquid at \( T_m \) is equal to the chemical potential of a solid at \( T_m \) and a change in chemical potential occurs when the melting point changes [6]. The liquid drop model is another method used to approximate the melting point of NPs (Equation 2).

\( \nu_{o} \) is the atomic volume and \( \gamma_{sv} \)  is the solid-vapor interfacial energy . Makkonen et al. discuss several methods for determining the different surface energies in the Gibbs-Thomson and liquid drop models [5]. Qi and Wang improved upon the liquid drop model by taking particle shape into account [7].

\( S_{vib} \) is the bulk vibrational entropy of melting, \( R \) is the ideal gas constant, \( r_c \) is the critical radius under which surface melting does not occur, and \( h \) is the atomic diameter. This model assumes the surface layer is three atomic layers thick and that surface melting occurs when the NP surface is in a quasi-liquid state. Chernyshev's model is unresponsive to particles <10 nm in diameter [8].

Lastly, due to the lower activation energy required for diffusion in NPs, the diffusion coefficient for nanoparticles increases nonlinearly as particle size decreases. The Arrhenius-type equation that describes this as follows: 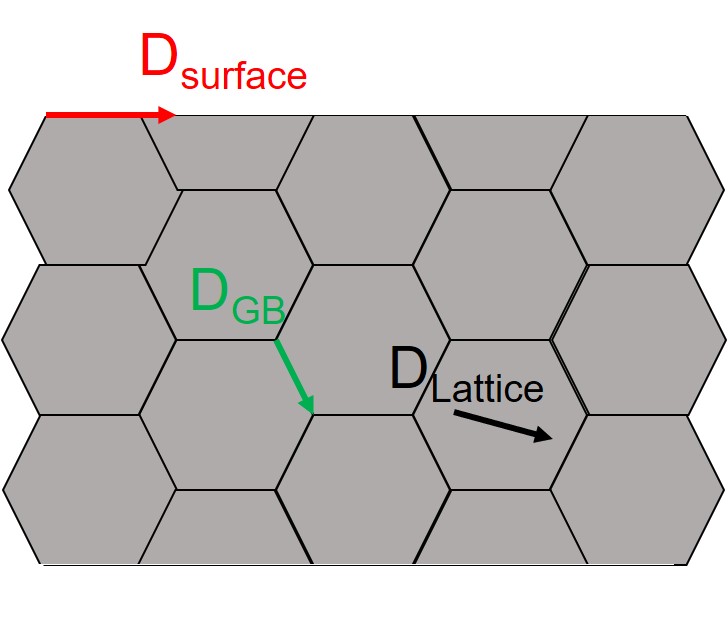 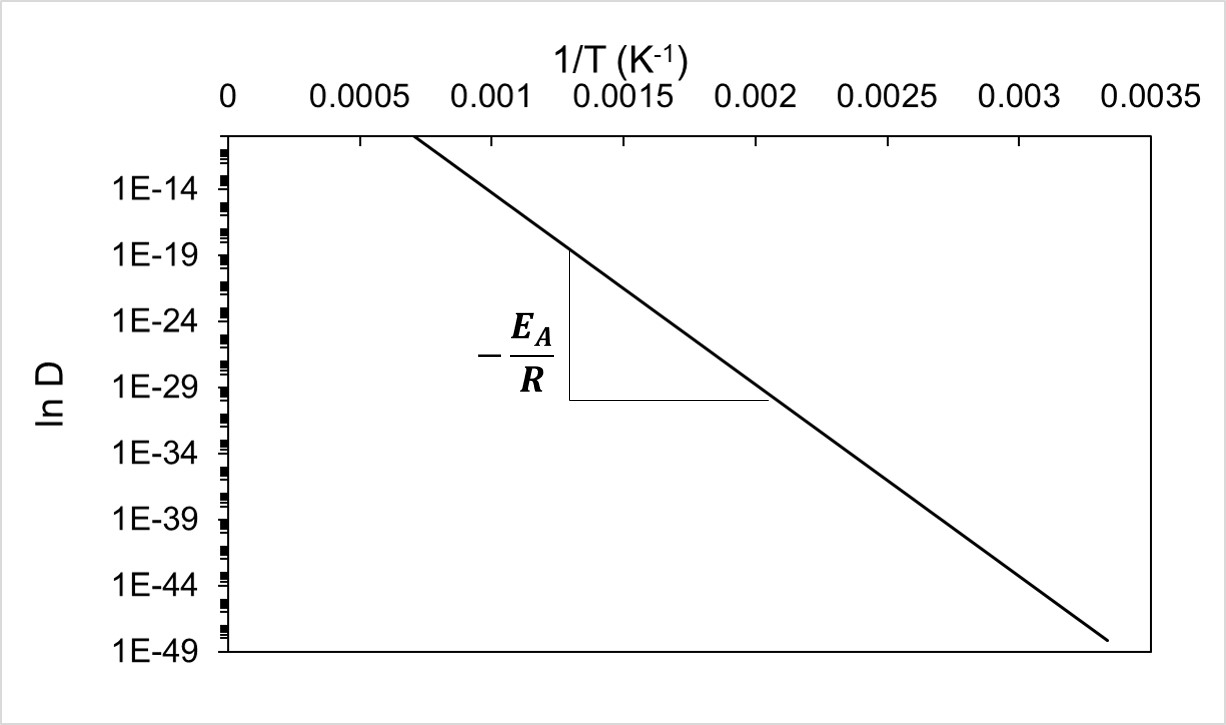 Due to the Gibbs-Thomson effect, the prevalence of surface melting, higher diffusion coefficient, and low sintering temperature of NPs, the minimum processing temperature of NPs is significantly lower than for microparticles. Note that surface melting and solid-state sintering cannot be simultaneously exploited. Once adjacent particles are joined, the melting temperature returns to its bulk value as seen in Figure 1 which contains theoretical and experimental data [9][13][14][4]. Bridges et al. demonstrated the enhanced diffusivity in nickel NMs as it pertains to brazing Inconel 718 and fitted the diffusion coefficient to a modified version of Hart's equation [15]. 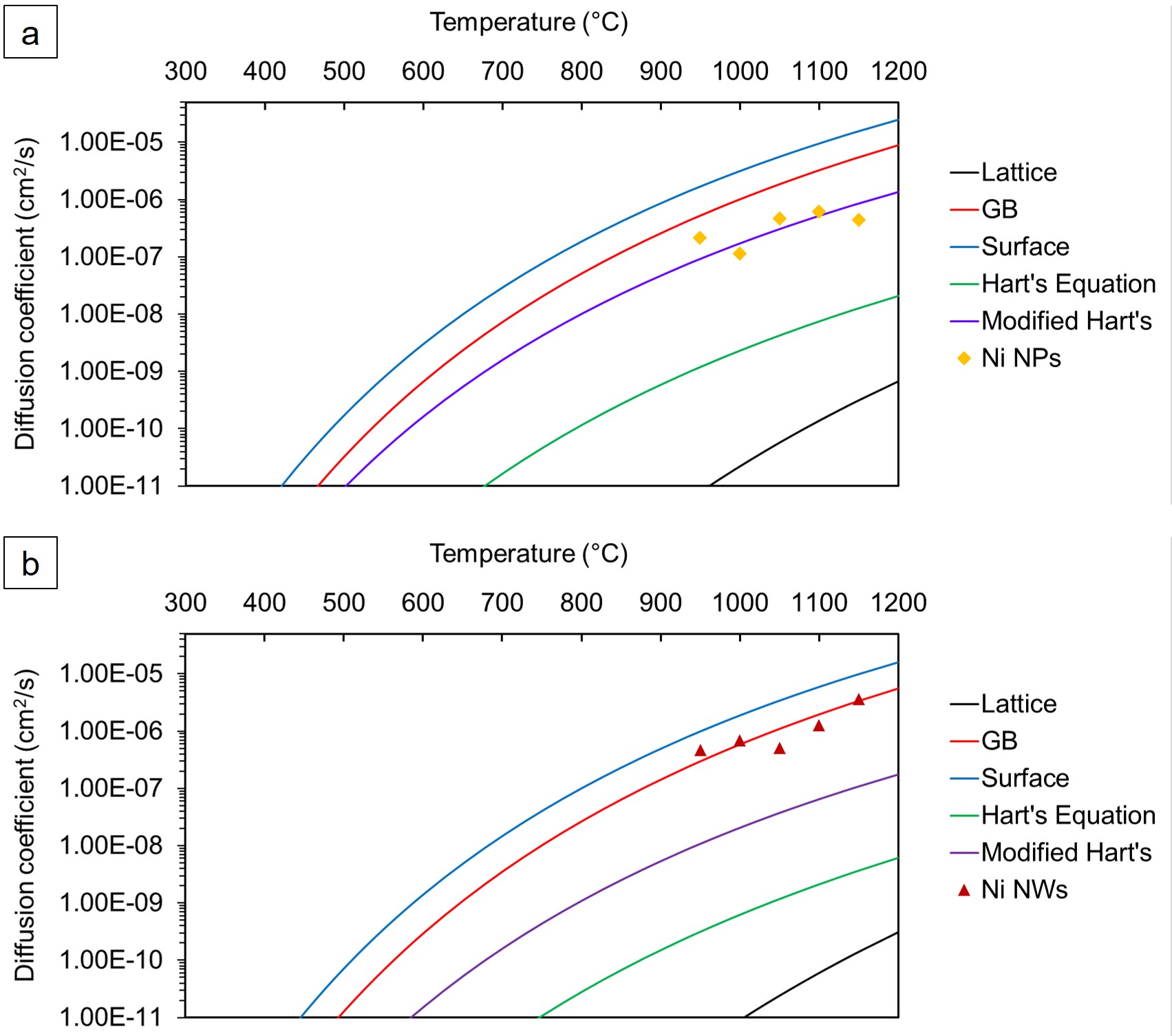 Low-temperature nanojoining typically occurs in the soldering temperature regime (< 450 °C) and utilizes either solid-state sintering or surface melting phenomena, but usually not complete melting of the nanomaterials. Being able to utilize the low processing temperature of NMs, damage to electronic components or polymeric substrates can be avoided. Cu-based and Ag-based NPs and NWs are among the most popular choices for soldering and electronic applications due to their high conductivity. For example, Li et al. have used silver nanoplates and nanowires to fabricate flexible electronics and for wire bonding applications [16][17][18]. To avoid damaging temperature-sensitive components in a SiC power electronic device, Manikam et al. mixed aluminum and silver nanoparticles for die attach applications and demonstrated its robustness under thermo-cycling conditions [19]. Nanowire-nanowire joining (Figure 4) is useful for different sensing applications such as sensing and flexible electronic applications since nanowire electronics have better flexibility than nanoparticle electronics [16]. Also, single nanowire devices have applications in high sensitivity detectors [20]. The bonding strength for low-temperature nanojoining is typically limited to tens of MPa [21]. Additionally, low-temperature nanojoining typically suffers from high porosity joints at the end of the heating cycle due to the presence of an organic shell on chemically synthesized NPs and/or from the organic vehicle in the paste. Organic content prevents intimate contact between adjacent NPs and hinders joining mechanisms as demonstrated in [22][23]. Carbon can possibly reduce the melting temperature of some metallic NPs after decomposition of the organic layer, but presumably, this is contingent on the dissolution of carbon into the NP surface and interior.

Figure 4: This figure is modified from Li et al. [16]. Ag NWs (a) before sintering, after (b) photonic sintering (ambient temperature is room temperature), and (x) thermal sintering at 250 °C for 5 min. The white scale bars indicate 150 nm and the yellow arrows indicate places where NW-NW joining has occurred [1]

Photonic sintering allows for certain NMs to be joined as low as room temperature (ambient) with a series of high-intensity camera flashes or a pulsed laser [24] which proves useful for manufacturing printable electronics.

2) Joining of base metals at temperatures far below the melting point of the commercial equivalent brazing alloy. For example, using copper-silver nanopastes the minimum joining temperature for Inconel 718 reduced from 779.1 °C to as low as 300 °C [28][29] as compared to BAg-8 alloy.

More
©Text is available under the terms and conditions of the Creative Commons-Attribution ShareAlike (CC BY-SA) license; additional terms may apply. By using this site, you agree to the Terms and Conditions and Privacy Policy.
Upload a video for this entry
Information
Subjects: Nanoscience & Nanotechnology ; Metallurgy & Metallurgical Engineering
Contributor MDPI registered users' name will be linked to their SciProfiles pages. To register with us, please refer to https://encyclopedia.pub/register :
Denzel Bridges
View Times: 376
Revisions: 2 times (View History)
Update Time: 07 Jul 2022
Table of Contents
1000/1000
Hot Most Recent