+1 point
Thank you for your contribution! You can also upload a video entry related to this topic through the link below: https://encyclopedia.pub/user/video_add?id=9022
Check Note
2000/2000
Advanced Gastroesophageal Cancer

Advanced gastroesophageal cancer (GEC) has a poor prognosis and limited treatment options. Immunotherapy including the anti-programmed death-1 (PD-1) antibodies pembrolizumab and nivolumab have been approved for use in various treatment settings in GEC.

GEC comprises a group of solid tumors arising from the esophagus, gastroesophageal junction, and stomach, including gastric cancer (GC), esophageal and gastroesophageal junction adenocarcinoma (EAC), and esophageal squamous cell carcinoma (ESC). GEC accounts for an estimated 45,820 new cases per year and 26,710 deaths per year in the United States [1]. The treatment of GEC consists of (i) surgical resection or definitive chemoradiation in localized tumors; (ii) surgical resection with perioperative chemoradiation or chemotherapy in locally advanced tumors; and (iii) palliative systemic therapy in advanced or metastatic tumors. Despite developments in diagnosis and treatment, the prognosis of GEC in advanced or metastatic stages remains very poor, with a five-year relative survival rate of 5–6% in the United States [2][3].

The standard palliative treatment in the first line setting for GEC is a combination cytotoxic chemotherapy with fluoropyrimidine and cisplatin with or without trastuzumab based on HER-2 status [4][5]. Recent developments in immunotherapy in GEC have led to the approval of pembrolizumab in the second line setting in PD-L1 + ESC and third line setting in PD-L1 + GEC and nivolumab in the second line setting in ESC regardless of PD-L1 expression. Additionally, a front-line chemoimmunotherapy regimen consisting of pembrolizumab with fluropyrimidine and cisplatin and nivolumab with FOLFOX/XELOX were given Food and Drug Association (FDA) priority review designation status for EC on 17 December 2020 based on the KEYNOTE-590 and CheckMate-649 studies [6][7]. However, response rates for immunotherapy as single agent and combination could be further optimized when tailored to the right subgroup of patients. Therefore, improvement in patient selection and biomarker use is a great unmet need.

Whereas ESC and EAC differ in the underlying etiology and the characteristic genomic and molecular alterations, EAC and GC have significant overlaps and are grouped into a single disease spectrum based on several large scale, sequencing and bioinformatic analyses. The Cancer Genome Atlas (TCGA) analysis conducted in the U.S. demonstrated that EAC and GC can be classified into four distinct molecular subtypes: (i) the MMR deficient/MSI-high (dMMR/MSI-H) subgroup; (ii) Epstein-Barr virus (EBV) subgroup, which is characterized by tumors with high PD-L1 or PD-L1 expression; (iii) chromosomal instability subgroup; and (iv) genomically stable subgroup [8][9]. Also, the Asian Cancer Research Group (ACRG) conducted a similar analysis with an analogous classification [10]. Additionally, the Oesophageal Cancer Clinical and Molecular Stratification (OCCAMS) analysis in Europe has established a distinct classification with three subtypes: (i) tumors with a defective homologous recombination (HR) pathway, (ii) tumors with common T > G mutations characterized by high TMB (TMB-H), and (iii) tumors with a dominant C > A/T mutational pattern [11]. Such classification schemes represent useful tools that can guide rational treatment selection based on tumor immunobiology.

Immunotherapy biomarkers currently approved for clinical use in GEC are the tumor-agnostic markers, MMR/MSI status and TMB, and PD-L1 expression, measured using the combined positive score (CPS). Additionally, there are several putative biomarkers currently under investigation in GEC including EBV, DNA damage response (DDR) gene alterations as well as gene expression profiles (GEP) that indicate active inflammation in the tumor microenvironment (TME) Figure 1. Herein we briefly describe and summarize the established and putative IO biomarkers of relevance in GEC and discuss the future direction of research in this area. 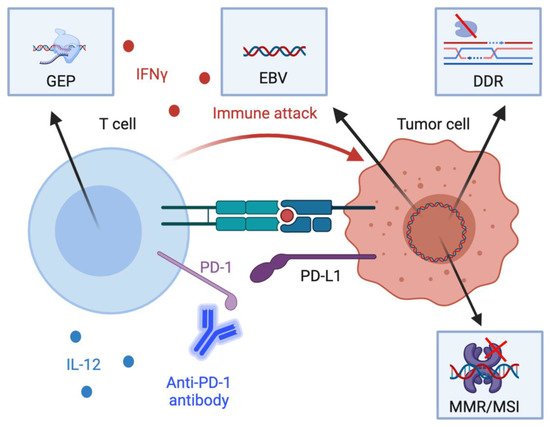 In the KEYNOTE-012 phase Ib trial, pembrolizumab demonstrated promising efficacy with an objective response rate (ORR) of 22% and a median duration of response (mDOR) of 40 months in patients with PD-L1-positive tumors, while the KEYNOTE-28 phase I/II trial showed an ORR of 30% and a mDOR of 15 months (Table 1) [13][14]. More importantly, the open-label, multicohort, KEYNOTE-059 phase II trial enrolled 259 patients with progression on two prior lines of systemic therapy to evaluate pembrolizumab efficacy and safety. Among the enrolled patients, 143 (55%) were PD-L1-positive with a CPS of 1 or higher and MMR proficient/microsatellite stable or MSI status undetermined. In these patients, pembrolizumab demonstrated an ORR of 13.3% and durable responses longer than 6 months in 58% of patients and 12 months in 26% of patients. The toxicity profile was comparable to that previously reported in patients with non-small cell lung cancer or melanoma treated with pembrolizumab [15]. Based on this trial, pembrolizumab was granted FDA approval in 2017 in GEC for patients with tumors with a PD-L1 CPS of 1 or higher in the third line setting [16]. Additionally, these results eventually led to the approval of pembrolizumab along with the PD-L1 CPS score as the companion diagnostic.

Pembrolizumab was subsequently evaluated in the second line setting in the KEYNOTE-061 trial. In this open-label, phase III randomized trial enrolled patients who progressed on first line chemotherapy regardless of PD-L1 status to compare pembrolizumab to standard of care paclitaxel. Among the 592 patients enrolled into the study, 67% (326) of patients had CPS of 1 or higher. The study did not meet its primary endpoints of improved median OS and PFS in patients with CPS of 1 or higher. However, a post hoc, subgroup analysis showed that in patients with CPS of 10 or higher (N = 108), the median OS was prolonged in pembrolizumab compared to paclitaxel, suggesting potential benefit in this subpopulation [17].

Nivolumab is an anti-PD-1 antibody that was approved for use on 22 September 2017 for use in the second line setting in Japan regardless of PD-L1 expression [19]. The anti-tumor activity of nivolumab was first demonstrated in GEC in the CheckMate-032 phase I/II trial which assigned 160 patients treated with 1 or more prior lines of systemic therapy to nivolumab (3 mg/kg), nivolumab (1 mg/kg) with ipilimumab (3 mg/kg), or nivolumab (3 mg/kg) with ipilimumab (1 mg/kg). Data showed that nivolumab had an ORR of 12% and a 12-month overall survival (OS) of 39% and nivolumab with ipilimumab had an ORR of 24% and a 12-month OS 35% [20]. Subsequently, the ATTRACTION-2, phase III, randomized controlled trial was conducted in several Asian countries. In this trial, the investigators assigned 493 patients with GEC who progressed on two or more lines of prior therapy to nivolumab or placebo. Results showed that nivolumab prolonged OS over placebo (1-year OS rate 27% vs. 11%). Additionally, long term follow-up data show striking two-year survival rates of 10.6% in nivolumab compared to 3.2% in placebo [21]. The results of ATTRACTION-2 trial supported the approval of nivolumab in Japan for use in the second line setting.

Several studies have also tested the safety and efficacy of anti-PD-L1 therapies with or without anti-CTLA-4 therapy in GEC. In the JAVELIN Gastric 300, phase III, randomized, controlled trial, avelumab (an anti-PD-L1 antibody) was compared to chemotherapy in the third line setting. In this study, avelumab did not meet its prespecified primary endpoints including OS and PFS. Notably, avelumab showed a better toxicity profile compared to chemotherapy, which suggested that it may have a role as maintenance therapy following frontline chemotherapy [22]. However, the subsequent JAVELIN Gastric 100 trial demonstrated no significant mOS difference between avelumab maintenance and continued chemotherapy (10.4 vs. 10.9 months) [23]. Additionally, a phase I/II trial demonstrated that durvalumab (an anti-PD-L1 antibody) with tremelimumab (an anti-CTLA-4 antibody) was associated with some activity (ORR 7.4%, 12-month OS 37%), suggesting the need to further evaluate this strategy in pretreated GEC patients [24].

Single-agent anti-PD-1 therapies have also been evaluated in trials consisting only of EC patients. In the phase II KEYNOTE-180 trial, 121 patients with EAC or ESC who progressed on two or more prior lines of therapy received pembrolizumab. Data showed an ORR of 9.9% among all patients and 13.8% among patients with CPS 1 or higher [25]. Subsequently, pembrolizumab was compared to chemotherapy in the second-line setting in the randomized, controlled, phase III KEYNOTE-181 trial that enrolled 628 patients with ESC and EAC. Among all patients, mOS was not prolonged (mOS 7.1 vs. 7.1 months). A subgroup analysis of the study, however, did demonstrate prolonged mOS in ESC patients with CPS 10 or higher (10.3 vs. 6.7 months; HR 0.64, 95%CI 0.46–0.90) [26]. Based on these results, pembrolizumab was approved for use on July 30, 2019 for use in the second line setting for ESC patients with CPS of 10 or higher [27].

Additionally, the long-term follow-up results of the ATTRACTION-1 trial were recently published for the open-label, single-arm, multicenter phase II trial conducted in Japan in ESC patients who progressed on first line chemotherapy. The results reported for patients who had a minimum of five years of follow up showed an ORR of 17%, mOS of 10.8 months and mPFS of 1.5 months [28]. Based on the results of this trial, the ongoing ATTRACTION-3 trial is comparing nivolumab to chemotherapy in chemo-refractory ESC. The three-year follow-up results of this open-label, randomized phase III trial show an mOS benefit of nivolumab compared to chemotherapy (10.9 vs. 8.5 months; HR 0.79, 0.64–0.97). The 36-month OS rates were nearly doubled in the nivolumab group (15.3% versus 8.7%) [29]. Based on these results, nivolumab was approved by the FDA on 10 June 2020 in ESC patients who progressed on first line chemotherapy regardless of PD-L1 expression [30].

Upfront chemotherapy with checkpoint inhibition recently demonstrated positive results in GEC in several clinical trials. The KEYlargo, phase II, single-arm trial evaluating first line pembrolizumab with CapeOx in GEC recently reported interim results showing an excellent ORR of 72.7%, mPFS of 7.6 months, and mOS of 15.8 months with a grade 3–4 treatment-related adverse events of 44% [31]. Furthermore, the ongoing ATTRACTION-4, phase II/III trial is evaluating nivolumab with chemotherapy (oxaliplatin with S-1 or capecitabine) in Asian patients. The initial part of this study (phase II) demonstrated a promising ORR of 65% and mPFS of 9.5 months [32]. Importantly, the interim results of two landmark phase III trials evaluating frontline anti-PD-1 therapy with chemotherapy were reported at ESMO 2020. In the randomized, controlled phase III CheckMate-649 trial, 1581 patients were assigned to nivolumab with chemotherapy or chemotherapy alone. The primary endpoint of this trial was a dual primary endpoint of OS and PFS in patients with CPS > 5. Results showed that nivolumab with chemotherapy was superior in mOS (HR 0.71, 95% CI, 0.59–0.86) and in mPFS (HR 0.68, 98% CI, 0.56–0.81) in the PD-L1 CPS > 5 population. Furthermore, mOS (13.8 vs. 11.6 months; HR 0.80, 99.3% CI, 0.68–0.94) in the overall population (not selected for PD-L1) was also superior in the experimental arm. About 60% of the trial enrollment comprised the PD-L1 CPS > 5 group, which may have impacted the positive results in the overall population. Incidence of grade 3–4 adverse events (59% vs. 44%) as well as serious adverse events leading to discontinuation (38% vs. 25%) were higher in the experimental arm compared to the control arm [33]. Also reported at ESMO 2020 was the KEYNOTE-590 phase III trial, which randomized 749 patients to pembrolizumab chemotherapy or chemotherapy alone. Data showed that pembrolizumab with chemotherapy was associated with superior ORR (45.0% vs. 29.3%, p < 0.0001), mOS (12.4 vs. 9.8 months; HR 0.73, 95% CI, 0.55–0.76) and mPFS (6.3 vs. 5.8 months; HR 0.65, 95% CI, 0.55–0.76) over chemotherapy alone in the overall, non-PD-L1 selected population [6].

Recent studies have also demonstrated that checkpoint inhibitors improve survival when added to frontline chemotherapy with trastuzumab in HER-2-positive advanced GEC. A recent open-label, single-arm, phase II trial (NCT02954536) enrolled 37 treatment-naïve patients with HER-2-positive GEC to receive pembrolizumab with trastuzumab with chemotherapy. The study demonstrated a six-month PFS of 70% (26/37), meeting its primary endpoint [34]. Additionally, a multicenter, single-arm phase Ib/II PANTHERA trial conducted in Korea recently reported in GI-ASCO 2021 a promising ORR of 76.7%, mPFS of 8.6 months, mOS of 19.3 months, and DOR of 10.8 months [35]. Based on these results, the KEYNOTE-811 trial is currently under way, comparing the addition of pembrolizumab versus placebo to trastuzumab and chemotherapy in untreated, HER-2 positive advanced GEC (NCT03615326).

More
© Text is available under the terms and conditions of the Creative Commons Attribution (CC BY) license; additional terms may apply. By using this site, you agree to the Terms and Conditions and Privacy Policy.
Upload a video for this entry
Information
Subjects: Gastroenterology & Hepatology
Contributor MDPI registered users' name will be linked to their SciProfiles pages. To register with us, please refer to https://encyclopedia.pub/register :
Robin Park
View Times: 177
Revisions: 2 times (View History)
Update Time: 27 Apr 2021
Table of Contents
1000/1000
Hot Most Recent