+1 point
Thank you for your contribution! You can also upload a video entry related to this topic through the link below: https://encyclopedia.pub/user/video_add?id=8278
Check Note
José A. Sáez 2021-03-30 13:03:41
This entry does not belong to the topic of this entry collection.
2000/2000
BioFilms

Biofilms are aggregates formed as a protective survival state by microorganisms to adapt to the environment and can be resistant to antimicrobial agents and host immune responses due to chemical or physical diffusion barriers, modified nutrient environments, suppression of the growth rate within biofilms, and the genetic adaptation of cells within biofilms. With the widespread use of medical devices, medical device-associated biofilms continue to pose a serious threat to human health, and these biofilms have become the most important source of nosocomial infections. However, traditional antimicrobial agents cannot completely eliminate medical device-associated biofilms. New strategies for the treatment of these biofilms and targeting biofilm infections are urgently required. Several novel approaches have been developed and identified as effective and promising treatments.

A biofilm is a special existence state with a three-dimensional tower structure formed by a microbial community attached to a biological or nonbiological surface and embedded in the matrix of an extracellular polymeric substance (EPS). An EPS is secreted by attached cells and is mainly composed of polysaccharides, extracellular DNA (eDNA), proteins, and other secreted substances (Figure 1) [1][2][3]. These substances act as a shield that often makes microorganisms resistant to physical removal, host immune responses, and antimicrobial treatments [1][2][3]. The development of biofilms is linked to quorum sensing (QS), which is a cell-to-cell communication mechanism that regulates a variety of physiological and biochemical functions [4][5]. It can influence the biological cycle of biofilms by targeting matrix compounds and regulate the production of multiple virulence factors to resist phagocytosis [4][6][7]. Biofilms have their own properties that change dynamically, and their biological cycle involves four stages, namely, adhesion, sessile growth, maturation, and dispersal [1][8]. The adhesion and sessile growth stages are reversible, wherein the cells aggregate loosely, but can also become detached and return to a free-floating state [3][8][9]. The maturation of biofilms is related to the production of EPS, which encapsulates cells in a thick and stable layer of complex biomolecules. This stage is irreversible [3][8][10][11]. Cells in the dispersion stage can secrete destruction factors to promote detachment of the biofilm and the colonization of surrounding sites [3][8][10][12]. Biofilms exhibit spatial heterogeneity [10][13]. The concentrations of various chemical substances in the biofilm, such as metabolic products, signal molecules, and nutrients, change stepwise from the surface to the inside, which makes the physiological activities of bacteria different in different parts of the biofilm [10][13]. The outer-layer cells remain metabolically active, while the inner-layer cells are persister bacteria, which are usually dormant [14]. Because of the uneven metabolism of bacteria in biofilms, regardless of the metabolic link that the antibacterial factors act on, some bacteria that are not in this metabolic state can survive, leading to difficulties in the elimination of infection or repeated outbreaks of infection. 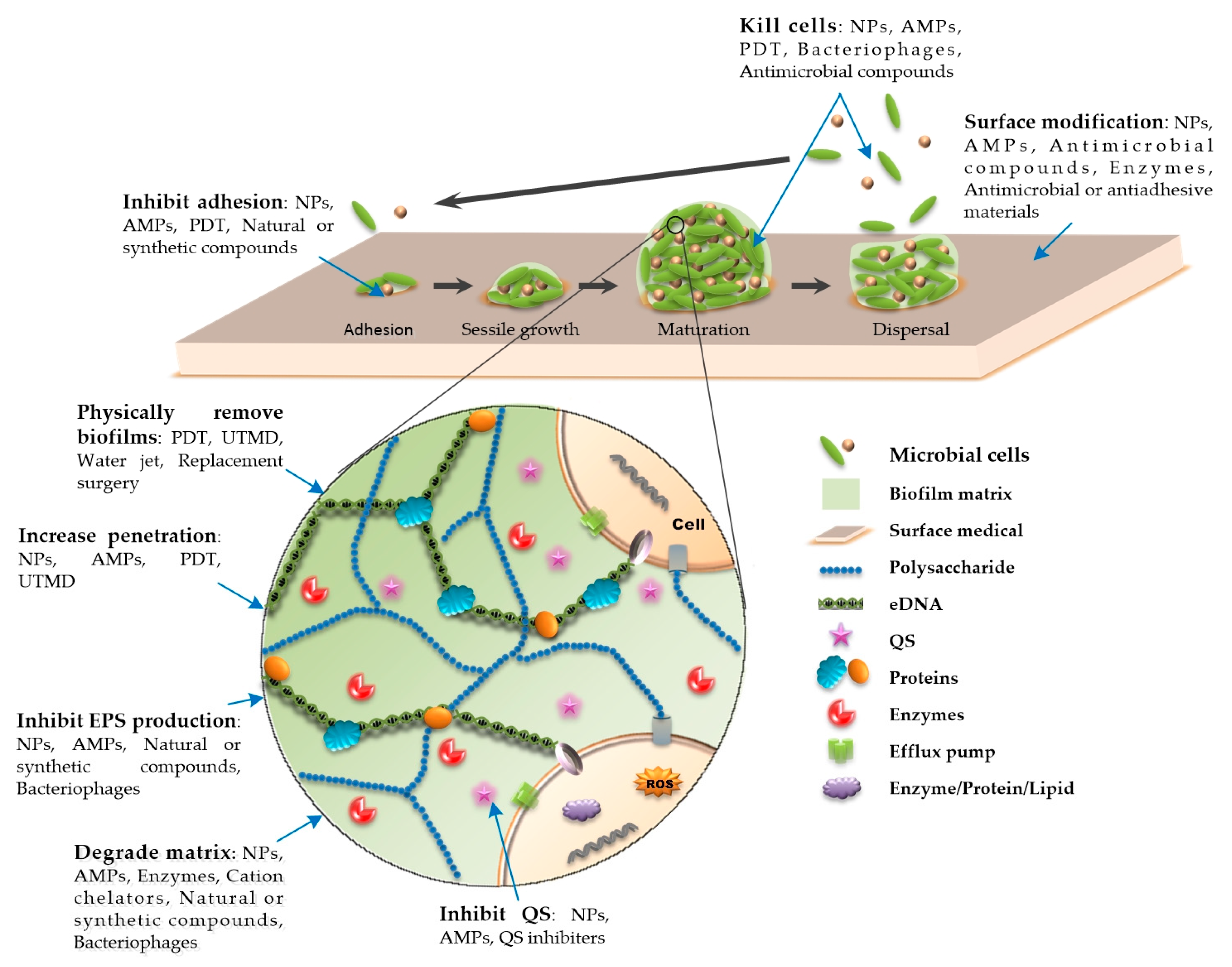 Up to 80% of microbial infections in the human body involve biofilm formation, especially in hospital settings, which greatly promotes the incidence rate and mortality [15][16]. With the high standards for the quality of life of patients, the improvement of medical standards, and the widespread application of medical devices, medical device-associated biofilms pose a serious threat to human health, and these biofilms are the most important source of nosocomial infections, despite the comprehensive prevention and control measures taken, such as disinfection and hygiene monitoring. According to statistics, about 2 million nosocomial infection cases occurred in the United States each year at the beginning of the 21st century, of which 50%–70% of nosocomial infections were related to indwelling medical devices [17][18][19]. Given the challenges associated with medical device-associated biofilm control, new strategies are urgently needed for the treatment of these biofilm-specific infections. Several novel approaches have been developed and identified as effective and promising treatment strategies.

The removal of medical devices from the body and continuous irrigation and debridement are the most successful treatment options for eradicating biofilms when standardized antibiotic treatment fails to effectively eliminate medical device-related biofilm infections [20]. Because of technical difficulties and a high morbidity, the removal of implants infected with biofilms, such as prosthetic joints and pacemakers, may not be the best option.

Photodynamic therapy (PDT) is an effective physical method for removing biofilms. It is composed of three main components: Light; a chemical molecule called a photosensitizer; and oxygen [21]. Light at a specific wavelength has an antibacterial effect. Antibacterial PDT generates highly cytotoxic reactive oxygen species (ROS) or excitable singlet oxygen to oxidize biological molecules on or within the cell membrane, such as proteins, nucleic acids, and lipids, causing cell DNA damage, cell membrane and organelle destruction, and even cell death [22] (Figure 1). A recent study has shown that PDT can not only inhibit the formation of E. faecalis biofilms formed on root canals by producing ROS, but also fight against biofilm infections by inhibiting the expression of toxic factors that affect early bacterial adhesion and promote the formation of the biofilm matrix structure [23] (Figure 1). Additionally, nanomaterials (NMs) can be used in PDT to enhance the effect of PDT by generating heat or transforming NMs into biofilm-destroying species [24][25]. PDT technology is mostly used in research on the treatment of dental plaque-related diseases [26]. PDT technology can be used to combat other implant-related biofilm infections, such as prosthetic joint infections and infections caused by ventilator-associated pneumonia biofilms [27][28]. Although preclinical studies have suggested that PDT is a promising technique for the treatment of biofilm infections, there remain many measures that need to be taken before it can be safely applied in clinical practice. The short-term side effects of PDT are usually mild and self-limiting, such as erythema, edema, and pain in the surrounding skin, while long-term exposure to light may cause cataracts, skin cancer, and other side effects [29]. During PDT, protection measures should be taken to protect the patient’s eyes from laser exposure and to ensure that the photosensitizer and photochemical reactions do not affect the patient’s surrounding tissues [11].

Applying antibacterial agents or antiadhesion agents to the surface of medical devices through surface engineering can effectively inhibit the adhesion and growth of microorganisms and prevent the formation of biofilms, which has become an important strategy for combatting biofilms related to medical devices. Antibacterial coating approaches prevent the formation and development of biofilms on medical devices through bacteriostatic or bactericidal effects. Traditional antibacterial coatings, such as chlorhexidine, gentamicin, minocycline, rifampicin, silver sulfadiazine, amikacin, and vancomycin, have been widely used in clinical practice, showing the efficacy of preventing catheter-related and other implant-related infections [30][31][32]. The combination of multiple antimicrobials, such as the combination of the antibiotics minocycline and rifampicin, has also shown good results in preventing single-drug resistance [30]. On the other hand, the extensive use of antimicrobial coatings may lead to bacterial resistance to antibiotics. To date, studies of antibacterial coatings have focused on the development of novel compound coatings with antibacterial effects or antibiotic delivery functions to prevent the formation of biofilms. We have summarized the novel surface-modifying compounds used against biofilms and mechanisms of action in Table 1.

Table 1. Summary of novel surface-modifying compounds used against biofilms and mechanisms of action.

Antimicrobial peptides (AMPs), which are a type of small-molecular peptide and are also known as host defense peptides (HDPs) [10], widely exist in nature and are a part of the innate immunity of almost all living organisms. AMPs can be extracted from bacteria, fungi, plants, insects, amphibians, fish, birds, mammals, and even the human body and can also be produced by chemical synthesis. AMPs have broad-spectrum and rapid antibacterial activity and do not easily result in drug resistance. In particular, their killing effect on certain drug-resistant pathogens has attracted attention. They can be used as single antibacterial agents or combined with traditional antibiotics.

To date, a variety of AMPs have been used in in vivo and in vitro studies, and some have been used in clinical practice, such as colicins and daptomycin. AMPs can not only exhibit powerful bactericidal activity, inhibit the formation of biofilms, and reduce or eliminate mature biofilms when the concentration is equal to or higher than the minimum inhibitory concentration (MIC) of the corresponding planktonic cells, but also display antibiofilm activity when the concentration is lower than the MIC of the corresponding planktonic cells [10]. This may be related to the mechanism underlying the multimode antibiofilm activity of AMPs. AMPs act on the bacterial cell membrane, forming different complex structures on the membrane through different mechanisms, such as the formation of barrel-state, toroidal pore, carpet, and aggregate models, which destroy the integrity and stability of the membrane, cause leakage of the cellular contents, and lead to the death of bacterial cells [45][46][47][48][49][50][51]. In addition, there are other potential antibiofilm mechanisms (Figure 1).

More
© Text is available under the terms and conditions of the Creative Commons Attribution (CC BY) license; additional terms may apply. By using this site, you agree to the Terms and Conditions and Privacy Policy.
Upload a video for this entry
Information
Subjects: Health Care Sciences & Services; Allergy
Contributor MDPI registered users' name will be linked to their SciProfiles pages. To register with us, please refer to https://encyclopedia.pub/register :
Yang Wang
View Times: 330
Revisions: 3 times (View History)
Update Time: 13 Apr 2021
Table of Contents
1000/1000
Hot Most Recent