Submitted Successfully!
Thank you for your contribution! You can also upload a video entry related to this topic through the link below:
https://encyclopedia.pub/user/video_add?id=8174
Check Note
2000/2000
Water-Related Issues in Bhutan
Edit
Upload a video
This entry is adapted from 10.3390/hydrology8010031

Water for hydropower in Bhutan has been in focus as compared to that allocated for irrigation, industries, and environmental demand. The demand for water in Bhutan has also increased in the last decade due to population increase, changes in lifestyle, and economic advancements through tourism and hydropower projects.

Bhutan is a small landlocked country with a 38,394 km2 area that is located in between India and China [1]. The country is sparsely populated (20 persons/km2) with a total population of 771,608 according to United Nations (UN) data and out of which only 45.8% of the population is urban [2][3]. The country lies between longitudes 88’ E and 93’ E and latitudes 26’ N and 29’ N [4]. Figure 1 shows the location map of Bhutan along with its hydrological features. Bhutan remains 72.5% under forest cover. The country’s constitution mandates that forest cover needs to be 60% at all times [1][4][5]. Bhutan has 2674 glacial lakes and more than 700 major glaciers [6][7]. In addition to that, there are also low-altitude wetland ecosystems. Bhutan also receives heavy rain in summer brought by the monsoon from the Indian Ocean and Bay of Bengal [6]. The concentration of rainfall in the monsoon season is so high that the country’s development activities are planned considering these climatic conditions [8]. 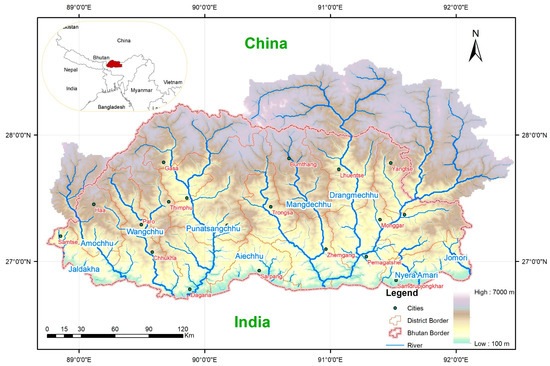 Figure 1. Map of Bhutan along with its geographical location and hydrological features (map developed from data of HydroShed [9]).

Freshwater in Bhutan is sourced mostly from glacial lakes, glaciers, wetlands, and monsoon rain. The steep mountains in the north reach elevations of up to 7500 m and the elevations are down to 100 m in the south of the country. This forms deep valleys that are divided by 4 major rivers: Amochhu, Wangchhu, Punatsangchhu, and Manas. These rivers carve and shape the country’s topography and provide water for various purposes [5][10][11].

Bhutan faces several challenges in water resource management due to its topography and seismic activity, and hence the country needs to explore various options under a comprehensive planning approach. On top of that, climate change has brought in more water-related issues and threats such as floods, glacial lake outburst floods (GLOFs), and droughts simultaneously. Increasing water demand due to development and population increment has also contributed to issues related to conservation and protection of water resources.

Bhutan is a typical example of a country suffering from inadequate water resource management. Having water availability per capita among the highest in the world, Bhutan suffers floods and water scarcity at the same time. This management issue indicates the unavailability of water at the right time in the right place. In some rural parts of Bhutan, closest access to water means hours of walk to the nearest spring or river. This has led to strict water use. For domestic use, the priority of water use is given to drinking and cooking, followed by cleaning and other purposes [12]. Water for sanitation and hygiene is a priority.

Domestic water uses suffers mainly due to accessibility to water resources. The main issue of accessibility problems rises due to the scattered populations on mountain slopes in rural areas [13]. The supply of water to the scattered settlements becomes costly too. Most regions of the country have narrow valleys with settlements usually on the slopes of the mountain or hill while the river or its tributaries flow at the bottom of the valley. Therefore, accessibility becomes economically inefficient for domestic and irrigation activities on slopes. All activities, therefore, depend on mountain springs, streams, and lakes for all sorts of purposes like irrigation, drinking, washing, cooking, and industrial needs [14][13]. Consequently, lack of proper infrastructure and lack of investment in equipment such as pumps, storage tanks, reservoirs, and pipes has led to accessibility problems [15].

Water pollution is a growing issue in Bhutan. Due to a lack of wastewater infrastructure, settlements, and industries are not properly connected to sewage systems [16]. Privately owned small individual septic tanks are the main options for waste collection. These individual septic tanks have a higher risk as there could be sewage overflow and it could contaminate the river basins [17][18]. In rural areas, people use pit toilets and pour-flush toilets. The increasing population has become a major contributor to the pollution of water as more waste is generated. The rivers in Bhutan are also used for burial purposes because of Bhutanese tradition and religious belief. Infants who die are put inside a wooden casket and submersed in the river instead of cremation and ashes of the dead are also washed away on the rivers. While preserving culture and tradition is important to any nation and its people, river burial becomes an increasing concern as it pollutes the water [19]. The localized deterioration of water quality is limited to most urbanized areas; however, the issue is growing and getting worst in a few areas [20][21].

Modernization and anthropogenic activities have led to a lot of land use disasters or issues such as landslides and forest fires, which affect the surface runoff and damage properties and agricultural land. The green land cover (forest cover area, agricultural land, and scrubland) has decreased significantly in the last decade. It is estimated that forest cover is 43%, agriculture area is 6%, and scrubland is 30% as of 2009 [20].

Unpredictable rainfall patterns and sudden heavy rainfalls during the monsoon due to climate change have increased the chances of flash floods in some of the river catchments of Bhutan [22]. Frequent flash floods and landslides were observed in the southern region of Bhutan in 2000 and 2004 when they received sudden heavy rainfall, which damaged properties, highways, agricultural lands, irrigation channels, and water supply schemes. Since 1999, the floods have been more frequent [23]. The direct and indirect impacts of flooding have resulted in an overall reduction of country’s GDP by 0.36% [24]. Among the most severe floods during this period were the 2000 monsoon flooding, the 2004 monsoon flooding in eastern Bhutan, the 2009 flooding due to Aila Cyclone, and the 2016 monsoon flooding in southern Bhutan [25]. GLOFs are becoming an increasing threat. The Lugye GLOF in 1994 and Lemthang GLOF in 2015 are the most devastating recorded so far. Similar GLOFs are common in this area in neighboring countries as well. The GLOF from Guangxieco Lake in Tibet 1988, the Dig Tsho GLOF 1985 Nepal, and Bhote Koshi GLOF 2016 Nepal are similar examples [26][27]. Further discussion on GLOFs in Bhutan is available. Figure 2 shows areas, which are prone to flooding due to heavy rainfall. 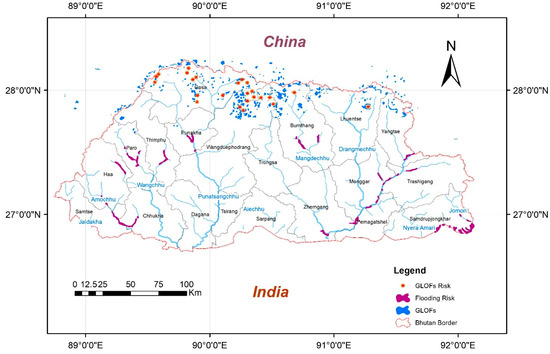 Irrigation water distribution is based on old traditional rules that follow mutual understanding and fixed proportions among the users. Water allocation is governed by the first come first serve rule and new allocations are only granted to surplus water. Upstream settlements use the water with full rights without compromising the needs of downstream users. However, with increasing development and commercialization, water demand among users has increased. This inequitable sharing of water has become the main cause of conflict among users and demands the development of a systemic approach [29][30][31]. The National Irrigation Policy 2012 seems to an effective solution for irrigation water allocation disputes and the Ministry of Agriculture and Forest is implementing the new policy with the institutional support of local governments using modern techniques of negotiations as mentioned.

Climate change is expected to cause increased melting rates of glaciers due to global warming. The rivers, which already show extreme spatial variations in flows are expected to have increased flows in winter causing floods. Koutsoyiannis [32] suggested the phenomena can be termed as ‘climate fluctuations’ under the global hydrological cycle instead of climate change. However, either way, the dry winter season is expected to have more localized drought conditions, especially in urban areas [7][33][34][35]. Different regions in the country face different issues of water because of altitudinal variation over such small distances. In the same way, a large spatial and temporal temperature variability is observed along with increasing temperatures in recent decades [36]. Climatic variation has caused the drying up of water sources during the cold winter and causes water shortages in some regions of the country whereas in the monsoon, the climatic impact is reversed by demonstrating frequent rainfalls that raise the risks of floods and landslides. Unfortunately, the political response against climate change threats is not promising [37]. As 54% of the population living in rural areas depends on farming for their livelihoods, they rely on favorable climatic conditions for a good harvest [12]. During the winter season, people’s water needs are sufficed by snowfall but due to global warming, snowfall has been less frequent in the higher regions of the country. Glaciers in the alpine regions have been diminishing due to less snowfall. These glaciers are very important to Bhutan’s water source as they serve as storage of freshwater, which can be used in the future [38][39][35].

More
©Text is available under the terms and conditions of Creative Commons-Attribution ShareAlike (CC BY-SA) license; additional terms may apply. By using this site, you agree to the Terms and Conditions and Privacy Policy.
Upload a video for this entry
Information
Subjects: Water Resources
Contributors MDPI registered users' name will be linked to their SciProfiles pages. To register with us, please refer to https://encyclopedia.pub/register :
Muhammad Atiq Ur Rehman Tariq
,
Maha Hussein
View Times: 716
Revisions: 2 times (View History)
Update Time: 28 Apr 2021
Table of Contents
1000/1000
Hot Most Recent