+1 point
Thank you for your contribution! You can also upload a video entry related to this topic through the link below: https://encyclopedia.pub/user/video_add?id=8158
Check Note
2000/2000
Mercury Toxicity and Detection

Mercury (Hg), this non-essential heavy metal released from both industrial and natural sources entered into living bodies, and cause grievous detrimental effects to the human health and ecosystem.

Metals like Na, K, Mg, Ca, V, Cr, Mn, Fe, Co, Ni, Cu, Zn, and Mo are well-known to play important roles in human physiological functions. However, the excessive as well as deficiency of these essential metals in human body can cause serious detrimental effects. Similarly, several non-essential metals entered into the human body from different sources can also cause grievous toxic effects even at trace quantity. Therefore, there is an exponential growth in the development of facile and cost-effective analytical techniques for the on-site and real-time detection of both essential and non-essential metal ions [1][2][3][4][5]. Among the various analytical techniques, the chromogenic and fluorogenic chemosensors are extensively developed for the detection of metal ions because of their high selectivity and sensitivity, easy-to-design, low-cost, simplicity, real-time, and on-site detection ability. The chromo-fluorogenic chemosensors are designed and developed by considering three important things: (i) signaling unit, (ii) recognition unit, and (iii) mechanism (Figure 1). The signaling unit may be an organic fluorophore, chromophore, or optically active nanoparticles. When the recognition unit selectively recognize the target analyte, the mechanism based on electron/charge/energy transfer occurred in the sensor can alter the electronic properties of the signaling unit that gives detectable optical response [6].

Figure 1. Schematic representation showing the design of a chemosensor.

Mercury (Hg), one of the non-essential heavy metal can cause serious toxicity to human health and ecosystem. Because of the high affinity to S-containing ligands, the accumulation of mercury in human body can affect the normal functioning of proteins and enzymes leading to the wide variety of diseases related to kidney, brain, reproductive disturbance, central nervous system, etc. [7]. Considering the toxicity, the acceptable limit of inorganic mercury in drinking water was prescribed as 2 μg L−1 (10 nM) by the United States Environmental Protection Agency (US EPA). Also, the inorganic mercury can be converted into organic mercury (like methylmercury) that affects the brain and cause other neurotoxic effects, and therefore, the intake of 1.6 µg/kg body weight per week of methylmercury was recommended by Joint FAO/WHO Expert Committee on Food Additives (JECFA) [8]. The associated toxicity even at a trace amount of mercury resulted an expedite growth in the design of novel analytical methods, including optically active chemosensors for the detection of mercuric ions. Literature survey supported the reports of several reviews on mercuric ions sensing and toxicity [9][10][11][12][13][14][15].

Mercury, a silvery colored metal, liquid at room temperature, is characterized by atomic number 80 in group 12 of the periodic table of elements, standard atomic weight 200.59 g/mol. Mercury can assume the three oxidation states 0, +1, +2. It presents a high density 13.53 g/mL, and a relatively high vapor pressure (0.0017 torr at 25 °C, corresponding to a concentration of 20 mg/m3). It is monoatomic in vapor phase, and is highly soluble in polar and non-polar solvents (a mercury water solution can reach the concentration of 0.6 μg/L at 25 °C).

The use of mercury is reported since the ancient times, mainly as the pigment cinnabar. The mined amount of mercury has been almost constant over the centuries until 1500, when huge amounts were produced in Spain (Almaden) to be shipped to Spanish South America for silver extraction. A paper by Hylander and Meili [16], takes into account the trend in mercury production from this period to 2000. The discovery of gold in California in 1850 produced a jump in mercury production, as well as its use in chlor-alkali plants in the 20th century. The consumption of explosives in the war industry contributed to the large production of mercury during World Wars I and II. The increasing awareness of mercury toxicity has led in the years to its banning from different applications (amalgamation in China in 1985 and in Russia in 1990, pesticides in USA in 1993, batteries in USA in 1996), until the Protocol on Heavy Metals (cadmium, lead and mercury), signed in 1998 by different countries, the 2005 EU Mercury Strategy, and finally the Minamata Convention on Mercury in 2013. At the fifth session of the Intergovernmental Negotiating Committee in Geneva, Switzerland, on 19 January 2013, it was agreed the Minamata Convention on Mercury, a global treaty to protect human health and the environment from the adverse effects of mercury. The major highlights of the Minamata Convention on Mercury include a ban on new mercury mines, the phase-out of existing ones, control measures on air emissions, and the international regulation of the informal sector for artisanal and small-scale gold mining [17]. Despite the above legislative controls, mercury remains one of the major toxicants in the world [18] and deserves a careful consideration about its environmental quantification, its toxic action, and the strategy for the clinical treatment of intoxication.

Mercury presents in the environment mainly in three chemical forms, i.e., elemental mercury (liquid or vapor Hg0), inorganic mercuric compounds (Hg2+), and organic mercury compounds (methylmercury, MeHg, CH3Hg and ethyl mercury EtHg, C2H5Hg) [19]. Toxicity of mercury in humans can be related to any of these three forms, absorbed in different ways: inhalation, oral, and dermal. The kind and the degree of intoxication is highly specific for any of these three chemical species, as well as the symptoms and the consequences [20]. Table 1 presents the main sources of exposure of the different forms of mercury and the affected organs [21].

Table 1. Some representative sources of exposure of the different forms of mercury, and the main affected organs [21].

The exposure of mercury by human body can be occurred via ingestion or inhalation [7]. The extensive utilization of elemental mercury in a number of industrial processes has led the involved personnel exposed to gaseous mercury. To have a quantitative evaluation of this exposure, we remember that in presence of liquid Hg0 the surrounding non-ventilated air can reach a concentration of 20 mg/m3 of monoatomic mercury vapors. Since a person inhales 15–20 m3 of air daily, a worker who stays about 8 h in a mercury saturated place inhales 5–6.6 m3 of air, i.e., 100–135 mg of Hg0. Mercury vapors are efficiently absorbed by lungs due to their high liposolubility producing severe pulmonary injuries. Elemental mercury in the lungs enters the blood flow, where a certain amount is oxidized to Hg2+ and excreted in urine, and some, due its high liposolubility, passes through the blood–brain barrier (BBB) and enters in the central nervous system.

Various forms of inorganic mercury in water are converted by microorganisms to methyl mercury that accumulates in fish and pass to humans through the food chain. In humans, inhaled or ingested methyl mercury is well absorbed and is found in red blood cells, liver, kidneys, and above all in the brain (including the fetal brain, since methyl mercury can cross the placental barrier), where it causes severe, cumulative, and irreversible injuries to the central nervous system. Its retention time in the human body varies from months to years, and the appearance of symptoms can be delayed for many years. Symptoms of methylmercury intoxication include mental retardation, cerebral blindness, deafness, palsy, and dysarthria, particularly in children exposed in utero. It is important to emphasize that methylmercury exposure mainly affects people whose diet includes the consumption of high amounts of fish.

Inorganic mercury compounds were largely used in the chemical industry, and were the cause of heavy occupational exposure. Inorganic salts are poorly absorbed, and kidneys represent their main target. From a chemical point of view, mercury toxicity depends primarily from the mercuric ion ability to form covalent bonds with sulfur atoms, substituting hydrogen atoms in sulfhydryl groups of proteins to form mercaptides. This can deactivate a number of essential enzymes, completely altering their regular biological functions [21][22][23].

Chelation therapy is used for the treatment of all forms of mercury intoxication. In clinical use, chelating agents remove metal ions from the biological ligands in the organism, where they exert their toxic action, through the formation of metal complexes that are successively excreted. Characteristics of a good chelator should be great solubility in both water and lipids, resistance to biotransformation, capacity to reach the sites of metal accumulation, high stability of the complexes at the pH of body fluids, and toxicity of the formed complexes lower than that of the free metal ions [21]. Most of the chelating agents in use today are not able to cross the BBB and this limits their ability to remove the toxic metal ions from the brain. The main chelating agents used in the treatment of mercury intoxication are summarized in Figure 2. 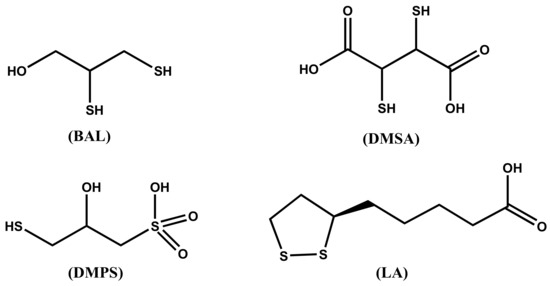 The dithiol chelating agent 2,3-dimercaptopropan-1-ol (BAL) was originally synthesized for the treatment of the effects of the war gas Lewisite. It competes successfully with protein SH groups forming stable chelates with Hg2+ metal ions. For several decades after its synthesis, it was recommended for the treatment of inorganic mercury poisoning, but it presents severe adverse effects, including painful intramuscular injections, high blood pressure and tachycardia, and predisposition to redistribute the complexed toxic elements to the brain. At any rate, it is contraindicated in the treatment of alkyl-Hg intoxication. In most cases, it has been replaced by DMSA and DMPS in the treatment of metal poisoning [24].

The chelating agent meso-dimercaptosuccinic acid (DMSA) or simply called succimer is the water-soluble dithiol. DMSA can be administered as intravenous and oral preparations, being DMSA a hydrophilic chelator. When administered orally, about 20% is absorbed in the gut, and about 95% of the absorbed amount is bound to plasma albumin, presumably by one SH group to a cysteine residue, being the second SH group free for binding metal ions. The action of DMSA is limited to the extracellular space. It increases Hg excretion in the urine. DMSA is considered the drug of choice for the treatment of organic-Hg intoxication. Even if DMSA does not pass the BBB, it indirectly reduces the brain burden of methyl mercury presumably by changing the brain/blood equilibrium. The derivative monoisoamyl 2,3-dimercaptosuccinic acid (MiADMSA) is at the moment under evaluation. Differently from DMSA, which removes extracellularly distributed metal ions [25], MiADMSA is also able to chelate intracellular distributed metal ions [26].

The structure of 2,3-dimercaptopropane-1-sulfonic acid (DMPS), also known as unitiol is shown in Figure 2. DMPS is a drug produced in Germany and registered for the treatment of mercury intoxication. It is not an approved drug in the USA, unless the FDA gives a special permission. The daily dose is usually 3–10 mg DMPS/kg body weight. DMPS is believed the optimal remedy in poisoning by inorganic mercury [27], while it is less effective than DMSA for organic mercury [28]. DMPS can be administered both intravenously and orally; less than 40% of orally administered DMPS is effectively adsorbed [29]. DMPS, which is a hydrophilic chelating agent, is mainly distributed in the extracellular space, but a small fraction is found in the intracellular compartments [30]. DMPS scavenges mercury from kidneys more effectively than DMSA, and is considered the drug of choice for the treatment of acute intoxication by inorganic mercury [30][31].

The α-lipoic acid ((R)-5-(1,2-dithiolan-3-yl)pentanoic acid, LA) is the sulfur containing organic compound known as thioctic acid, presented in Figure 2. LA, essential for aerobic metabolism, is ordinarily produced in the body. Its reduced form, called dihydrolipoic acid (DHLA), contains a couple of -SH groups; it is characterized by high affinity for mercuric ion and has been recently proposed as an effective mercury chelator [31].

More
© Text is available under the terms and conditions of the Creative Commons Attribution (CC BY) license; additional terms may apply. By using this site, you agree to the Terms and Conditions and Privacy Policy.
Upload a video for this entry
Information
Subjects: Medicine, Research & Experimental
Contributor MDPI registered users' name will be linked to their SciProfiles pages. To register with us, please refer to https://encyclopedia.pub/register :
Suban Sahoo
View Times: 441
Revisions: 2 times (View History)
Update Date: 22 Mar 2021
Table of Contents
1000/1000
Hot Most Recent