Submitted Successfully!
Thank you for your contribution! You can also upload a video entry related to this topic through the link below:
https://encyclopedia.pub/user/video_add?id=7640
Check Note
2000/2000
The Cat Mandible
Edit
Upload a video
This entry is adapted from 10.3390/ani11020405

The cat mandible is small and has some peculiarities relative to the dentition (only three incisors, a prominent canine, two premolars and one molar); a conical and horizontally oriented condyle, and a protudent angular process in its ventrocaudal part. Most of the body of the mandible is occupied by the mandibular dental roots and the mandibular canal that protects the neurovascular supply: the inferior alveolar artery and vein, and the inferior alveolar nerve that exits the mandible rostrally as the mental nerves. They irrigate and innervate all the teeth and associated structures such as the lips and gingiva. Tooth roots and the mandibular canal account for up to 70% of the volume of the mandibular body. Consequently, when fractured it is difficult to repair without invading the dental roots or vascular structures.

Cats have been fully appreciated animals for a long time. Ancient Egyptians mummified cats, as pets were buried with their owner, or they were used as votive offerings that depicted the gods [1]. Animals were revered by associating them with deities. In fact, the goddess Bastet was symbolised as a cat or even a woman with a feline head [2].

Nowadays, cats are one of the most numerous pets at home, sharing our company and friendship. According to the American Pet Products Association’s (APPA) 2019–2020 National Pets Owners Survey [3], it is estimated that in the USA, 67% of households own a pet; that is 84.9 million homes with an estimated 63.4 million dogs and 42.7 million cats, among other pets (such as freshwater/saltwater fish, birds, small animals and reptiles, accounting all together for 137 million animals being kept at home). However, compared with 2019 figures, in the USA, an estimated 89.7 million dogs and 94.2 million cats is reported (made in base of multiplying the number of households that own the pet by the average number of pets owned by household), which is a large decrease in both species, but no explanation was given, unless maybe it was a poor rough calculation. In Europe, there were at least 85 million households (38% of all households) owning a minimum of one pet animal [4]: 106.4 million cats and 77.4 million dogs. Hence, in Europe, the numbers of cats largely overtake those of dogs as pets; as they do not take much space, they do not need to go outdoors during the day, and their ownership is more affordable, among other reasons. However, the majority of pet clinics are more oriented towards dog management and treatment. Concerning cat size, they are usually small and consequently their surgery is more difficult. In addition, their lifespan is longer than the dog’s, with an average life span of 12 years and ages of 20 years or more not uncommon. The current longevity record cited by Beaver in 2003 [5] was 36 years. Regarding clinical surgery solutions, up to now, little has been done by companies to provide surgical prostheses and other products adapted to such a small animal, as they are more oriented towards different dog breeds. Hence, unfortunately, and in accordance with Little [6], cats are still the ‘poor stepchild’ in companion animal medicine, receiving less attention in research into common medical problems or improved diagnostic and treatment approaches than is given to their canine counterparts.

Cats should not be considered or treated as small dogs as there are many differences.

Starting with the anatomical description of the feline mandible, and according to the Veterinary Anatomical Nomenclature [7][8], the cat jaw has two halves (mandibula) joined rostrally by an articulatio intermandibularis, known as the mandibular symphysis (in carnivores, partially conformed by a synchondrosis and a sutura intermandibulares). Each mandibular half has a horizontal part (body, or corpus mandibulae) and a vertical part placed caudally (ramus mandibulae; Figure 1). The mandibular ramus has a dorsal part, oriented slightly caudally, with a coronoid process (processus coronoideus) on the top (which attaches the temporal muscle), and two faces with both fossae for muscle fixation: a masseteric fossa (very deep, laterally—fossa masseterica) and a pterigoid fossa (medially—fossa pterygoidea). More or less at the same level as the dorsal margin of the body, completely caudally, there is the condylar process (processus condylaris), a cylinder oriented horizontally that articulates with the mandibular fossa of the temporal bone and participates in the temporomandibular joint (TMJ) (articulatio temporomandibularis). On the caudal part and ventrally, there is an angular process (processus angularis), oriented caudally. 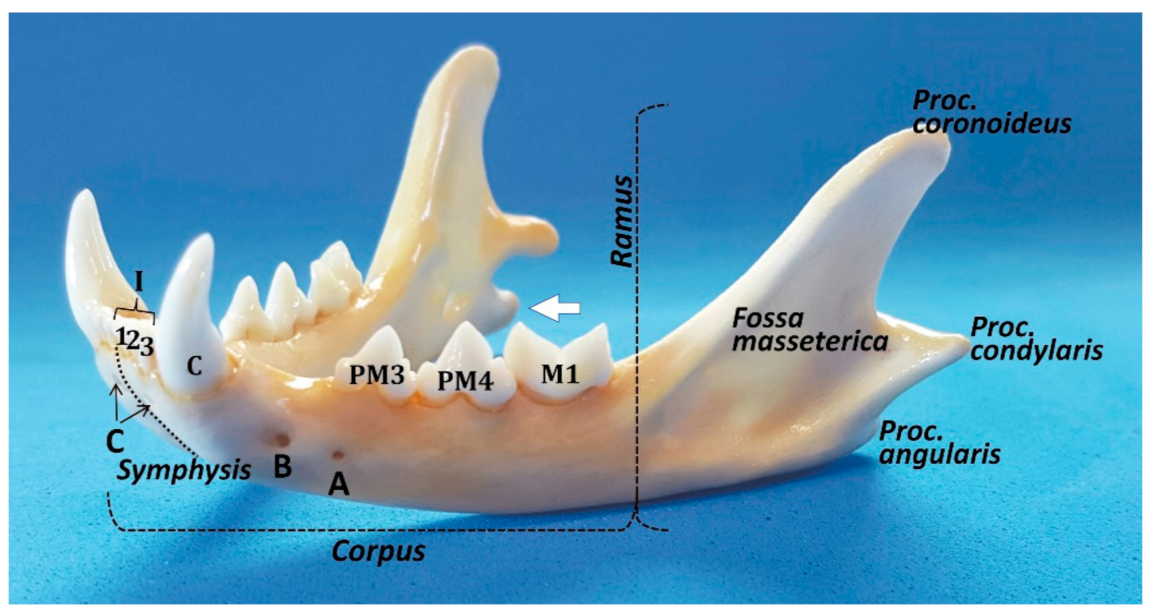 Figure 1. Rostro-lateral view of the cat mandible. The most relevant details are shown. A: posterior mental foramen; B: main or middle mental foramen; and C: rostral mental foramen. The prominence of the processus angularis is more manifest in a medial view (white arrow).

The mandibular body has two faces—medial or lingual (facies lingualis), and lateral or buccal and labial (facies buccalis and labialis)—separated by two margins ‒ the dorsal or alveolar (margo alveolaris), and the ventral—(margo ventralis). The ventral margin is smooth, whereas the alveolar margin is very irregular with deep pits where the root teeth are fitted (alveoli dentales). The body has two parts, a rostral or incisive part (pars incisiva) and the molar part (pars molaris). The incisive part supports the incisive and canine teeth, whereas the molar part contains the premolar and molar teeth. All the lower teeth form the arcus mandibularis inferior. The buccal face of the mandible is uneventful, except for the two mental foramina (foramina mentalia): the main mental foramen and the posterior mental foramen (or three, the third, minute, one below the incisors, similar to a foramen nutricium, but through which the anterior mental nerves exit to innervate the area below the incisors) [9]. Lobprise & Dodd [10] also mention three foramina: the rostral foramen in the incisive part, the middle mental foramen at the level of the labial frenulum, and the caudal mental foramen between the two roots of the third premolar. In contrast, the lingual face has only a mandibular foramen (foramen mandibulae) in the rostral part of the ramus for the neurovascular supply of the mandible, which enters into the mandibular canal and provides the sole blood supply (the mandibular artery (A. alveolaris inferior‒ramus of the maxillary artery (A. maxillaris)—to the alveolar bone and teeth, and the mandibular vein (V. alveolaris inferior)) and the inferior alveolar (sensory) nerve (N. alveolaris inferior). According to Starkie & Stewart [11], a tough fibrous sheath surrounds the main nerve and its larger branches, and only the cat (in contrast to the rabbit and sheep) presents a sheath of compact bone surrounding the neurovascular bundle [11], a fact that in theory would help to localise the feline mandibular canal by radiography.

Pitakarnnop et al. [12] analysed 44 parameters on dried feline bones and demonstrated that there are only three hallmarks for sex identification in cats. One of them is the coronoid process of the mandibular ramus (with an accuracy rate up to 88.2%): ‘looking at a lateral view of the mandible, the coronoid process in females was more curved than in males’. The other two were described in the os coxae [12]. Hence, the mandible could give us additional and useful information for some scientific domains, such as forensic, developmental and evolutionary sciences, and also for zooarchaeological studies.

To the outer surface of the mandible is attached the Mm. masseter and buccinator (partes buccalis and molaris); the inner surface to the Mm. pterygoidei (lateralis and medialis), mylohyoideus, geniohyoideus, and geniohyoglossus; both surfaces at the lower border to the M. digastricus, and the upper process (processus coronoideus) to the M. temporalis [7][8].

When the jaw is closed, the lower incisors normally strike immediately caudal to the upper incisors. The lower canine occludes between the lateral upper incisor and the upper canine. Hence, this arrangement provides a shearing action, particularly between the cheek teeth [13]. The upper and lower teeth do not touch when the jaws move in a sagittal plane. However, when the cat chews on one side of the mouth, the lower jaw must be brought to that side, so the buccal surface of the lower teeth may shear upwards and forwards against the occlusal surface of the upper teeth [13].

Bite force is generated by the interaction of the masticatory muscles, the mandibles and maxillae, the TMJs, and the teeth. The main factors affecting the bite forces in dogs and cats are body weight and the skull’s morphology and size [14]. In cats, biting forces of 20–23.25 kg at the canine and up to 28 kg at the carnassial teeth have been reported [15] or, according to Kim et al. [14], an average of 73.3 Newtons (N) and 118.1 N, respectively. However, if converted to kg-force (kgf), it is obvious that these measurements do not match with [15], as they result in 7.47 and 12.04 kgf, respectively.

Clinicians must have a deep knowledge of the functional anatomy of cats (taking into account that they present some important differences with respect to the dog) to achieve an effective and high-quality cat medicine.

A good knowledge of the anatomy of the mandible and the TMJ, and their relation to other important structures, such as blood vessels and nerves, is essential for an accurate interpretation of radiographic images and tomographic diagnostic techniques, in order to make a diagnosis and achieve good results in the management of different conditions.

Clinicians and surgeons are increasingly aware of animal welfare to avoid or, at least, minimise any suffering due to iatrogenic complications. Such as those related to a temporary or permanent blindness and/or deafness following general anesthesia when the mouth is held open with a gag (to the compression of the angular process on the maxillary artery, disrupting the blood flow to the maxillar rete mirabile and the brain); the resection of the lingual molar pad (that includes the lingual molar salivary gland), or those complications secondary to dental extraction.

More
© Text is available under the terms and conditions of the Creative Commons Attribution (CC BY) license; additional terms may apply. By using this site, you agree to the Terms and Conditions and Privacy Policy.
Upload a video for this entry
Information
Subjects: Anatomy & Morphology
Contributor MDPI registered users' name will be linked to their SciProfiles pages. To register with us, please refer to https://encyclopedia.pub/register :
MATILDE LOMBARDERO
View Times: 591
Revisions: 2 times (View History)
Update Time: 01 Mar 2021
Table of Contents
1000/1000
Hot Most Recent