Submitted Successfully!
Thank you for your contribution! You can also upload a video entry related to this topic through the link below:
https://encyclopedia.pub/user/video_add?id=760
Check Note
2000/2000
Leucine Metabolism
Edit
Upload a video
This entry is adapted from 10.3390/nu12051299

Leucine, an essential branched amino acid, has anti-obesity effects on glucose tolerance, lipid metabolism, and insulin sensitivity. The catabolism of Leucine is a conserved regulator of physiological aging, participating in diverse physiological and pathological processes. This topic review offers an up-to-date report on the decomposition and metabolites of leucine in mammals, as α-ketoisocaproate (KIC) and β-hydroxy-β-methylbutyrate (HMB).

Leucine (Leu), chemically known as α-aminoisohexanoic acid, was first isolated from cheese by Proust in 1819 [1]. Later, Braconnot crystallized it from the acid hydrolysate of muscle and wool and named it Leu [1]. As an essential amino acid as well as a branched-chain amino acid (BCAA), Leu is widely found in animal protein and dairy products such as milk, eggs, pork, beef, and chicken, as well as in beans [2][3][4]. Some plants and fungi are also rich in Leu, including whole grains, vegetables, oats, wheat germ, garlic, and black fungi [5][6]. Leu has strong oxidative capabilities, and its main physiological functions include regulation of protein metabolism [7] and supply of oxidative energy [8]. This energy supply can be used in special physiological periods such as hunger, lactation, stress, and exercise [9], as well as in regulating immune functions [10] and in lipid metabolism [11].

Researchers began studying the role of BCAAs in protein synthesis as early as the 1970s, with a particular focus on Leu [12]. By the end of last century, the effects of Leu on protein synthesis were observed by supplementing diets with Leu or inducing production of Leu [13]. In addition to its effects on protein synthesis, Leu has a strong effect on the energy and lipid metabolism [14]. These effects have been investigated in detail since the beginning of the current century [15]. Strikingly, the mammalian target of rapamycin complex 1 (mTORC1) protein kinase, which is a well-known activator of the mTOR pathway, is essential to Leu’s regulation of lipid synthesis. Changes in the mTORC1 signaling pathway following Leu treatment have been detected at the molecular level to elucidate the mechanism of action of mTORC1 and its effects on lipid metabolism [16].

In summary, a plethora of human, animal, and cell experiments have shown that Leu can promote homeostasis and lipid metabolism through comprehensive mechanisms that will be discussed in detail in this review.

2. The Decomposing Process of Leu Oxidation

The catabolism of Leu is a conserved regulator of physiological aging, participating in diverse physiological and pathological processes, including lipid metabolism [17]. The decomposition of Leu in mammals is complicated and involves two processes. Initially, the ingested Leu is catalyzed by BCAA transferase (BCAT) [18] to generate α-ketoisocaproate (KIC) and the precursor of β-hydroxy-β-methylbutyrate (HMB); this transamination is rapid and bidirectional (Leu+α-ketoglutarate<==>KIC+glutamate) [19]. Subsequently, KIC enters one of two metabolic pathways, generating either isovaleryl-CoA (90%–95% of Leu metabolism) or HMB (5%–10% of Leu metabolism). In the latter, KIC is irreversibly metabolized into HMB via KIC-dioxygenase; in the former, KIC undergoes irreversible and the rate-limiting oxidative decarboxylation through a series of reactions catalyzed by the branched chain a-keto acid dehydrogenase (BCKD) complex, which is regulated by BCKD kinase (BDK). Eventually, Leu is converted to acetoacetate acid and acetyl-CoA, which are intermediates of the tricarboxylic acid cycle (Figure 1). Excess KIC can be released into circulation and taken up by other organs such as the liver and the adipose tissue, where it is then resynthesized into BCAA or oxidized to generate adenosine triphosphate (ATP) [20]. 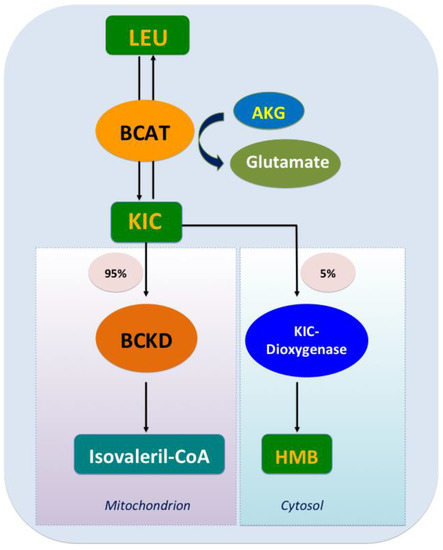 Figure 1. Leucine catabolism. After leucine ingestion, the reversible transamination of leucine to α-ketoisocaproate (KIC) occurs, through branched-chain amino acid (BCAA) transferase (BCAT) present in various tissues, and then approximately 5% of KIC is converted into β-hydroxy-β-methylbutyrate (HMB) by the cytosolic enzyme KIC dioxygenase, and about 95% ingested KIC is metabolized into isovaleryl-CoA, which is catalyzed predominantly by the mitochondrial branched chain a-keto acid dehydrogenase (BCKD).

Leu and its metabolites have been hypothesized to be regulatory signals for energy homeostasis. Studies indicate that Leu metabolites rather than Leu itself may be the signal for activation of mTOR [21]. In addition to Leu, HMB and KIC are direct activators of the silent information regulator of transcription 1 (SIRT1) enzyme [22]. It is evident that Leu has a pivotal role in partitioning energy from the adipose tissue to the skeletal muscle, resulting in a decreased energy storage in the adipocytes and increased fatty acid utilization in muscles. However, it remains unclear whether these effects are mediated by intact Leu or by KIC or by HMB.

Full consideration of the extant literature demonstrates that KIC is more efficacious than Leu at activating both the mTOR signaling and SIRT1 [23]. Both KIC and Leu suppress lipid anabolism in the adipocytes while promoting fatty acid oxidation (FAO). Moreover, treatment with KIC increases the oxidation of BCAA in cultured C2C12 myotubes. KIC increases complete FAO in skeletal muscle by inhibiting the BCKD kinase, resulting in strong activation of the BCKD complex and an increased flux through the BCAA oxidative pathway [24][25]. Increased free FAO decreases glucose utilization, and increased muscle mass can effectively enhance oxidation of fats. However, it is notable that KIC may be a double-edged sword, improving growth while at the same time increasing fatty acid synthesis by down-regulating the phosphorylation of adenosine 5‘-monophosphate-activated protein kinase (AMPK), leading to negative effects on lipid metabolism in the adipose tissue [26]. As the mechanisms of KIC are complex and have not been fully explained, further study is imperative.

Evidence has been provided, both in vitro and in vivo, that the endogenous conversion efficiency of Leu to HMB is approximately 5%–10%. Despite this, the impact of HMB as a dietary supplement has been a focus of recent research on lipid metabolism. HMB is an interesting supplement in sports. In human trials, HMB intake in endurance training has an advantageous effect on the reduction of fat mass [27][28][29]. As athletes attempt to maintain a certain body mass, mostly through lowering the amount of adipose tissue, HMB supply may be a suitable choice for them to positively influence their physical performance. In one particularly interesting study, diet-induced obese mice were treated for 6 weeks with low (2 g/kg diet) or high (10 g/kg diet) doses of HMB, resulting in an increased adipose SIRT1 activity, uptake of muscle glucose and palmitate uptake, insulin sensitivity, as well as improvement in inflammatory stress biomarkers and reduced adiposity [30]. Bruckbauer et al. demonstrated that Leu /HMB in combination with low-dose resveratrol (200 nM) can synergistically activate SIRT signaling and stimulate energy metabolism by enhancing the FAO of adipocytes as well as insulin sensitivity. This resulted in increased activities of AMPK, SIRT1, and SIRT3 in murine muscle cells [31]. Furthermore, HMB has been reported to stimulate AMPK phosphorylation synergistically with metformin or resveratrol in C2C12 myotubes, resulting in a significant increase in insulin sensitivity and glucose tolerance in mice [32].

Dietary HMB supplementation may regulate the adipose tissue function, including FAO and lipolysis, with a concurrent increase of serum adiponectin concentration [33]. These effects may be partly mediated by the AMPKα–mTOR pathway and associated with mitochondrial biogenesis, the AMPK–SIRT1–proliferator-activated receptor γ coactivator-1α (PGC-1α) axis, and myokines [34]. Notably, HMB also has a critical role in regulating mitochondrial function, which relates to many diseases, such as aging, neurodegenerative diseases, obesity, diabetes, and cardiovascular disease [35]. Treatment of myotubes with a dose of HMB (50 mM) for 24 h significantly increased mitochondrial mass, respiration capacity, and biogenesis, and was superior to the effects observed with treatment of Leu (0.5 mM) [36]. HMB administration reversed the high-fat diet (HFD)-induced whitening and promoted the browning of brown adipose tissue (BAT), also demonstrating beneficial effects on the development of obesity and/or glucose homeostasis [37]. Moreover, HMB supplementation stimulates AMPK indirectly by elevating adiponectin levels, resulting in the suppression of mTOR signaling, which subsequently inhibits fatty acid synthesis and promotes lipolysis, decreasing the total weight of fat in a growing pig model [34]. Taken together, these results suggest that HMB may modulate mitochondrial biogenesis and FAO via the AMPKα–SIRT1–PGC-1α axis in the adipose tissue.

More
© Text is available under the terms and conditions of the Creative Commons Attribution (CC BY) license; additional terms may apply. By using this site, you agree to the Terms and Conditions and Privacy Policy.
Upload a video for this entry
Information
Subjects: Endocrinology & Metabolism
Contributor MDPI registered users' name will be linked to their SciProfiles pages. To register with us, please refer to https://encyclopedia.pub/register :
Fengna Li
View Times: 1271
Revisions: 2 times (View History)
Update Time: 29 Oct 2020
Table of Contents
1000/1000
Hot Most Recent