+1 point
Thank you for your contribution! You can also upload a video entry related to this topic through the link below: https://encyclopedia.pub/user/video_add?id=7433
Check Note
2000/2000
Unmanned Ground Vehicles

Unmanned ground vehicles (UGVs) have great potential in the application of both civilian and military fields, and have become the focus of research in many countries. Environmental perception technology is the foundation of UGVs, which is of great significance to achieve a safer and more efficient performance.

In the field of civil application, UGVs are mainly embodied in autonomous driving. High intelligent driver models can completely or partially replace the driver’s active control [3][4][5]. Moreover, UGVs with sensors can easily act as “probe vehicles” and perform traffic sensing to achieve better information sharing with other agents in intelligent transport systems [6]. Thus, it has great potential in reducing traffic accidents and alleviating traffic congestion. In the field of military application, it is competent in tasks such as acquiring intelligence, monitoring and reconnaissance, transportation and logistics, demining and placement of improvised explosive devices, providing fire support, communication transfer, and medical transfer on the battlefield [7], which can effectively assist troops in combat operations.

Environment perception technology includes simultaneous localization and mapping (SLAM), semantic segmentation, vehicle detection, pedestrian detection, road detection and many other aspects. Among various technologies, as vehicles are the most numerous and diverse targets in the driving environment, how to correctly identify vehicles has become a research hotspot for UGVs [8]. In the civil field, the correct detection of road vehicles can reduce traffic accidents, build a more complete ADAS [9][10] and achieve better integration with driver model [11][12], while in the field of military, the correct detection of military vehicle targets is of great significance to the battlefield reconnaissance, threat assessment and accurate attack in modern warfare [13].

The complete framework of vehicle recognition in UGVs autonomous driving system is portrayed in Figure 2. Generally, vehicle detection is used to extract vehicle targets in a single frame of an image, vehicle tracking aims to reidentify positions of the vehicles in subsequent frames, vehicle behavior prediction refers to characterizing vehicles’ behavior basing on detection and tracking in order to make a better decision for ego vehicle [14]. For tracking technology, readers can refer to [15][16], while for vehicle behavior prediction, [17] presented a brief review on deep-learning-based methods. This review paper focuses on the vehicle detection component among the complete vehicle recognition process, summarizes and discusses related research on vehicle detection technology with sensors as the main line. 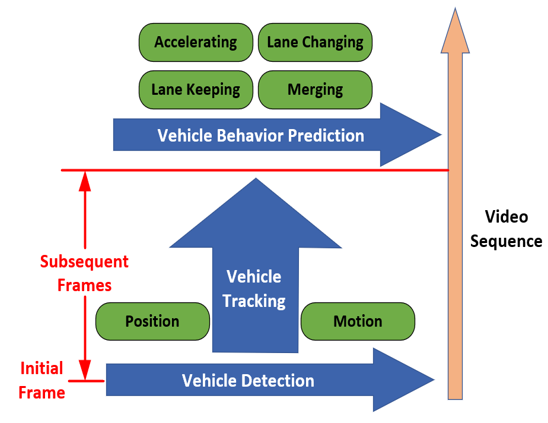 The operation of UGVs requires a persistent collection of environmental information, and the efficient collection of environmental information relies on high-precision and high-reliability sensors. Therefore, sensors are crucial for the efficient work of UGVs. They can be divided into two categories: Exteroceptive Sensors (ESs) and Proprioceptive Sensors (PSs) according to the source of collected information.

Readers can refer to [18] for detailed information on different sensors. This section mainly introduces ESs that have the potential for vehicle detection. ESs can be further divided into two types: active sensors and passive sensors. The active sensors discussed in this section include Lidar, radar, and ultrasonic, while passive sensors include monocular cameras, stereo cameras, omni-direction cameras, event cameras and infrared cameras. Readers can refer to Table 1 for the comparison of different sensors.

* The range of cameras except for depth range of stereo camera is related to operation environmental thus there is no fixed detection distance.

Lidar can obtain object position, orientation, and velocity information by transmitting and receiving laser beam and calculating time difference. The collected data type is a series of 3D point information called a point cloud, specifically the coordinates relative to the center of the Lidar coordinate system and echo intensity. Lidar can realize omni-directional detection, and can be divided into single line Lidar and multi-line Lidar according to the number of laser beams, the single line Lidar can only obtain two-dimensional information of the target, while the multi-line Lidar can obtain three-dimensional information.

Lidar is mainly used in SLAM [19], point cloud matching and localization [20], object detection, trajectory prediction and tracking [21]. Lidar has a long detection distance and a wide field of view, it has high data acquisition accuracy and can obtain target depth information, and it is not affected by light conditions. However, the size of Lidar is large with extremely expensive, it cannot collect the color and texture information of the target, the angular resolution is low, and the long-distance point cloud is sparsely distributed, which is easy to cause misdetection and missed detection, and it is easily affected by sediments in the environment (rain, snow, fog, sandstorms, etc.) [22], at the same time, Lidar is an active sensor, and the position of the sensor can be detected by the laser emitted by itself in the military field, and its concealment is poor.

Radar is widely used in the military and civilian fields with important strategic significance. The working principle of a radar sensor is like that of Lidar, but the emitted signal source is radio waves, which can detect the position and distance of the target.

Radars can be classified according to the different transmission bands, and the radars used by UGVs are mostly millimeter-wave radars, which are mainly used for object detection and tracking, blind-spot detection, lane change assistance, collision warning and other ADAS-related functions [18]. Millimeter-wave radars equipped on UGVs can be further divided into “FMCW radar 24-GHz” and “FMCW radar 77-GHz” according to their frequency range. Compared with long-range radar, “FMCW radar 77-GHz” has a shorter range but relatively high accuracy with very low cost, therefore almost every new car is equipped with one or several “FMCW radar 77-GHz” for its high cost- performance. More detailed information about radar data processing can refer to [23].

Compared with Lidar, radar has a longer detection range, smaller size, lower price, and is not easily affected by light and weather conditions. However, radar cannot collect information such as color and texture, the data acquisition accuracy is general, and there are many noise data, the filtering algorithm is often needed for preprocessing, at the same time, radar is an active sensor, which has poor concealment and is easy to interfere with other equipment [24].

Ultrasonic detects objects by emitting sound waves and is mainly used in the field of ships. In terms of UGVs, ultrasonic is mainly used for the detection of close targets [25], ADAS related functions such as automatic parking [26] and collision warning [27].

Ultrasonic is small in size, low in cost, and not affected by weather and light conditions, but its detection distance is short, the accuracy is low, it is prone to noise, and it is also easy to interfere with other equipment [28].

Monocular cameras are mainly used in semantic segmentation [29], vehicle detection [30][31], pedestrian detection [32], road detection [33], traffic signal detection [34], traffic sign detection [35], etc. Compared with Lidar, radar, and ultrasonic, the most prominent advantage of monocular cameras is that they can generate high-resolution images containing environmental color and texture information, and as a passive sensor, it has good concealment. Moreover, the size of the monocular camera is small with low cost. Nevertheless, the monocular camera cannot obtain depth information, it is highly susceptible to illumination conditions and weather conditions, for the high-resolution images collected, longer calculation time is required for data processing, which challenges the real-time performance of the algorithm.

The working principle of the stereo camera and the monocular camera is the same, compared with the monocular camera, the stereo camera is equipped with an additional lens at a symmetrical position, and the depth information and movement of the environment can be obtained by taking two pictures at the same time through multiple viewing angles information. In addition, a stereo vision system can also be formed by installing two or more monocular cameras at different positions on the UGVs, but this will bring greater difficulties to camera calibration.

Compared with a monocular camera, an omni-direction camera has too large a view to collect a circular panoramic image centered on the camera. With the improvement of the hardware level, they are gradually applied in the field of UGVs. Current research work mainly includes integrated navigation combined with SLAM [42] and semantic segmentation [43].

The advantages of omni-direction camera are mainly reflected in its omni-directional detection field of view and its ability to collect color and texture information, however, the computational cost is high due to the increased collection of image point clouds.

An overview of event camera technology can be found in [44]. Compared with traditional cameras that capture images at a fixed frame rate, the working principle of event cameras is quite different. The event camera outputs a series of asynchronous signals by measuring the brightness change of each pixel in the image at the microsecond level. The signal data include position information, encoding time and brightness changes.

Event cameras have great application potential in high dynamic application scenarios for UGVs, such as SLAM [45], state estimation [46] and target tracking [47]. The advantages of the event camera are its high dynamic measurement range, sparse spatio-temporal data flow, short information transmission and processing time [48], but its image pixel size is small and the image resolution is low.

In the field of UGVs, infrared cameras are mainly used for pedestrian detection at night [49][50] and vehicle detection [51]. The most prominent advantage of an infrared camera is its good performance at night, Moreover, it is small in size, low in cost, and not easily affected by illumination conditions. However, the images collected do not contain color, texture and depth information, and the resolution is relatively low.

More
© Text is available under the terms and conditions of the Creative Commons Attribution (CC BY) license; additional terms may apply. By using this site, you agree to the Terms and Conditions and Privacy Policy.
Upload a video for this entry
Information
Subjects: Engineering, Industrial
Contributor MDPI registered users' name will be linked to their SciProfiles pages. To register with us, please refer to https://encyclopedia.pub/register :
Qi Liu
View Times: 1165
Revisions: 2 times (View History)
Update Time: 22 Feb 2021
Table of Contents
1000/1000
Hot Most Recent