Submitted Successfully!
Thank you for your contribution! You can also upload a video entry related to this topic through the link below:
https://encyclopedia.pub/user/video_add?id=7338
Check Note
2000/2000
Pharmacological Activities of Galactomannan Derivatives
Edit
Upload a video
This entry is adapted from 10.3390/polysaccharides2010001

Galactomannans are versatile macromolecules with broad industrial potential. The influence of changes in the chemical structures and respective bioactivities of these polysaccharides have been extensively studied. The derivatives obtained by sulfation, complexation, and phosphorylation are the most studied biological properties in galactomannans. The derivatives obtained have shown several pharmacological activities such as antiviral, antimicrobial, anticoagulant, fibrinolytic, chemopreventive, anticancer, antioxidant, chondroprotective, analgesic, immunomodulatory, and antileishmanial.

The development of new biomaterials and “functionalized polymers,” especially from renewable sources, has practical potential for applications in biomedicine and industry [1]. In this direction, the growing interest in the chemical modification or derivatization of natural polysaccharides to create derivatives with properties adapted to the desired applications is remarkable [2][3]. Molecular modification and improvement of the biologically active properties of polysaccharides have sparked interest about the development of biomedical materials. Therefore, it is important to find the correlation between the chemical structure and the functional activity of the polysaccharides [4][5][6].

Galactomannans are polysaccharides which can be obtained from microorganisms, including fungi and yeasts, but the vast majority originate from plants [7]. Among the plant-derived polysaccharides, galactomannans have received much attention, since these biopolymers can be obtained in their pure form, with a high yield, by aqueous extraction from the endosperm of the seeds of leguminous plants [6][8]. Furthermore, since galactomannans are an abundant plant resource, their production on an industrial scale has been widely targeted [5][9], especially in the food, pharmaceutical, and cosmetic industries [10].

Galactomannans have a heterogeneous polymeric structure, consisting of a main chain of mannose units linked by β-1,4-glycosidic bonds and galactose side units linked to mannose by α-1,6-glycosidic bonds (Figure 1) [7][11]. Galactomannans from different sources differ from each other in the ratio of mannose/galactose units, molecular weight, and the distribution of individual galactose branches in the main chain, which significantly influences their biochemical properties [12][13].

Figure 1. Illustration of the chemical changes of galactomannans and their biological activities evaluated.

In addition, the structural peculiarities of galactomannans make them soluble in water at different temperatures, versatile in their applications, and chemically and biochemically reactive [1]. These factors, combined with the absence of ionic charge in the structure of these polysaccharides, make galactomannans more susceptible to molecular changes than many polysaccharides found in nature. Alterations can be made in order to inherit the characteristics of the native polymer, such as biocompatibility, to expand its technological functionality, improve its intrinsic biological properties, and/or create new functional properties, opening a range of application possibilities in the biomedical areas [12][14][15].

Biological activities of polysaccharides are affected by several factors, among them, monosaccharide composition, molecular weight, molecular structure, functional groups, degree and pattern of substitution, flexibility, and chain configuration [4][19][20]. In addition to the evident biological activity of natural polysaccharides, derivatives obtained by hydrolysis, complexation, or chemical modifications, such as sulfation, phosphorylation, oxidation, and carboxymethylation, were also considered in many studies as successful bioactive derivatives [5][21][22][23].

The changes in chemical structure and biological activities of galactomannans have been extensively studied. The most studied biological properties in galactomannans are derivatives obtained by complexation or chemical modifications, such as sulfation, oxidation, and phosphorylation. Figure 2 represents the main strategies for obtaining galactomannan derivatives. 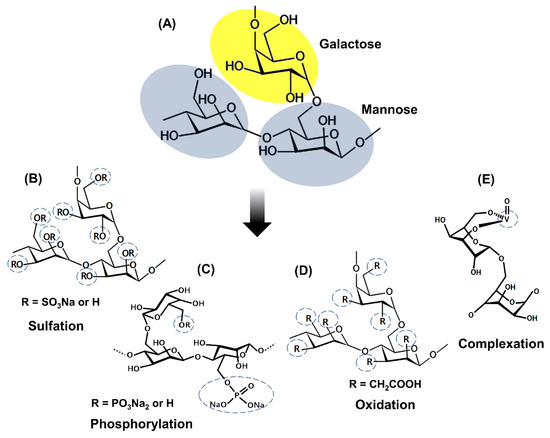 Sulfation is the most studied chemical modification in galactomannans. Most studies about sulfation of galactomannans used dimethylformamide as the solvent and SO3– pyridine complex as a sulfating reagent [6][8][9][23][26][27][28][29]. Several studies report preferred sulfation for the 6-CH2 groups due to their higher reactivity with esterifying agents and a degree of sulfating (DS) ranging from 0.4 to 1.85. These sulfated galactomannans are composed of negatively charged sulfate groups that are related to their biological activities [4][5][6][8][9][23][26][27][28][29]. The addition of sulfate groups in the polysaccharide structure improves solubility and enhances the biological properties compared to the non-sulfated polysaccharides. Anticoagulant, antiviral, antioxidant, and antitumor activities are successful examples of sulfated polysaccharides [4][23][28][29].

Polysaccharides can also undergo oxidation in several ways to generate distinct structures. For example, primary alcohol may be oxidized to form the aldehyde or later a carboxylic acid [30]. Protein-free guar gum was oxidized by the method of the TEMPO (2,2,6,6-tetramethylpiperidine-1-oxide radical)/NaBr/NaClO system [25]. This oxidized derivative presents a degree of substitution of 0.36, and the oxidation happened preferentially in the carbon 6 of the mannose residue. FT-IR and 13C NMR spectrum showed the presence of the COOH group in the oxidized molecule.

Hydrolysis is an important strategy for polysaccharide modification. In the enzymatic method, the galactose side chains, or the main mannose chain can be cleaved, and the α-galactosidase and β-mannanase can be used. Compared with the chemical modification method, the enzymatic method is simple to control, and the reaction conditions are milder [24]. The biological activity of the locust bean gum galactomannan hydrolyzed by thermostable β-D-mannanase was evaluated by Chen et al. [31]. In this study, after 24 h of the enzymatic reaction, the weight average molecular weight of galactomannan derivative reduced from 5,580,010 to 3188, and the hydrolysate containing the following manno-oligosaccharides: mannobiose, mannotriose, and mannotetrose.

According to Adriazola et al. [22], complexation with metal ions can make complexes more biocompatible and soluble, less toxic, and endow them with some pharmacological activities, such as antimicrobial and antitumor. Galactomannans can be modified by introducing complexing metals. Vanadium is the metal generally used to complex with galactomannans in order to originate biologically active complexes. Polysaccharides are suitable binders for complexation reactions with the cationic form of vanadium due to the affinity of this metal for hydroxyl groups free of these polyhydroxyl compounds. Complexation of vanadium (IV, V) with monosaccharides is facilitated by the presence of ligands containing vicinal cis-OH groups [19][32]. Anticancer and antileishmanial activities are recognized as examples of the success of galactomannans complexed with vanadium [19][33].

The pharmacological activities of galactomannan derivatives are detailed below.

The intrinsic characteristics of polysaccharides can be changed, for example, by partial hydrolysis and by the removal or introduction of specific chemical groups [34]. When a galactomannan is modified, a biologically inert polymer can be transformed into a biologically active one [35].

Pharmacological activities can be related to changes in the chemical structure of the molecules caused by the type and number of functional groups. Several functional groups, such as -CN, -NO2, -NH2, -OH, -SH, -CHO, -COOH, -COOR, -CONH2, -SO3H, and -PO3H, contribute to drug-receptor interaction. The interaction of a compound with a specific receptor is directly related to a pharmacological effect. Changes in the conformation and flexibility of the molecules can also affect the interaction of molecules with receptors. In addition, several physicochemical properties of a molecule, such as molecular weight, lipophilicity, solubility, permeability, and acid-base ionization, can alter its activity [36][37].

In general, the chemical structure of a molecule determines its physicochemical characteristics and, consequently, determines its absorption, distribution, metabolism, excretion, and toxicity (ADME/Tox) properties and influences the pharmacological effect of the molecule [37].

Table 1 presents the main pharmacological activities of galactomannan derivatives, their source of origin, and the processes for obtaining derivatives.

More
© Text is available under the terms and conditions of the Creative Commons Attribution (CC BY) license; additional terms may apply. By using this site, you agree to the Terms and Conditions and Privacy Policy.
Upload a video for this entry
Information
Subjects: Biochemistry & Molecular Biology
Contributors MDPI registered users' name will be linked to their SciProfiles pages. To register with us, please refer to https://encyclopedia.pub/register :
Marcia dos Santos Rizzo
,
Alessandra Braga Ribeiro
View Times: 247
Revisions: 2 times (View History)
Update Time: 24 Feb 2021
Table of Contents
1000/1000
Hot Most Recent