Submitted Successfully!
Thank you for your contribution! You can also upload a video entry related to this topic through the link below:
https://encyclopedia.pub/user/video_add?id=7308
Check Note
2000/2000
Ustilago Maydis
Edit
Upload a video
This entry is adapted from 10.3390/jof7010008

Ustilago maydis is a biotrophic fungus that causes tumors in all aerial maize organs. After spores germinate on the epidermis, in nature two compatible strains fuse to form a dikaryotic filament that can infect maize cells; however, the lab-derived SG200 strain is solopathogenic and utilized in almost all experiments [1][2]. U. maydis initially grows along the epidermis of all organs before penetrating between epidermal cells to reach and then spread throughout the subepidermal cells. It forms a biotrophic interface (close juxtaposition of fungal cell wall with the plant cell wall or plasma membrane) with the target interior cells, which invaginate their plasma membranes to accommodate branching fungal hyphae [1]. After approximately 3 to 5 days, there is substantial growth (hypertrophy) and excess host cell division (hyperplasia), the initial steps of tumor formation [3][4]. By convention, botanists define organs as an assemblage of tissues, and tissues are defined as containing one or more cell types that constitute a functional unit, i.e., photosynthetic leaf tissue contains mesophyll and bundle sheath cell types. U. maydis infects leaf, stem, and reproductive organs (ears, tassels) of maize. The differential interaction of the fungus and epidermal compared to interior cell types demonstrates tissue-specific interactions between host and pathogen in all organs examined.

The tissues in leaf and anther are distinct in terms of both cell composition and relative developmental stage at the time of inoculation, although tumors develop in approximately the same amount of time. The outer layer of leaves is composed of epidermal cells—pavement, bulliform, subsidiary, hair, and guard cell types. In the center of the leaf there is vasculature (sieve tube, companion, xylem, and parenchyma cell types) surrounded by bundle sheath cells and mesophyll cells. (Figure 1A). Fungi inoculated onto seedling and subsequent leaves grow towards the vasculature, a source of nutrition, and basipetally towards the youngest cells of the blade, a meristematic zone with actively dividing cells near the joint between the blade and sheath of each leaf. Fully mature leaves are more recalcitrant to infection than leaves that are still growing. 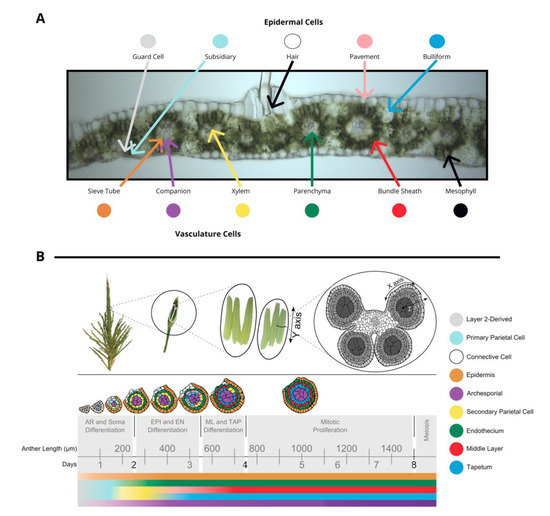 Figure 1. (A) A transverse image of a hand section of an adult leaf with different cell types labeled: bundle sheath, mesophyll, epidermal cells (guard cells, subsidiary, hair, pavement, bulliform), and vasculature cells (sieve tube, companion, xylem, parenchyma). (B) Tassels contain many paired spikelets with two florets with three anthers each. Anthers are composed of four lobes joined with vasculature as shown in a transverse section. The time course of anther development is segmented into grey boxes on the basis of differentiation and proliferation of key cell types with anther length and time shown for reference. Anther lobes were traced from confocal images with different cell types filled in colors corresponding to the legend. The colored bars correspond to differentiation of different cell types over time. (A) was provided by Susanne Matschi and (B) is reprinted from [5].

Maize tassels contain hundreds of paired spikelets covered by the leaf-like glumes that each contain two florets (including the palea, lemma, three stamens, a pair of lodicules) [6]. Stamens contain two distinct organs—the filament (epidermis, connective tissue, vasculature) subtending an anther. Anthers are the most rapidly growing spikelet organ and will ultimately constitute most of the floret mass. Anthers contain the continuation of the vasculature and connective tissue from the filament and four pollen-producing lobes. During their period of peak cell proliferation, each tassel organ can be converted to tumorous growth by U. maydis infection. For example, successful U. maydis infection occurs in pre-meiotic anthers, starting as early as the anther primordium stage and continuing through the period of rapid cell proliferation when anther lobes achieve a dartboard architecture with five layers of cells: epidermis, endothecium, middle layer, tapetum, and archesporial cells (Figure 1B) [6]. The first four tissues of anther cells are strictly somatic and only one cell thick. This period of anther development requires approximately 7 days. Initially, anther primordia of 50–150 µm consist of epidermis (layer 1 of the floral meristem) and layer 2-derived cells, with archesporial cells beginning to differentiate around 170 µm [6]. Somatic cell patterning begins around 240 µm as endothecial and secondary parietal cells are specified after periclinal division of the layer 2-derived cells, and finally the tapetal and middle layer cells differentiate after periclinal division of secondary parietal cells during the 600–700 µm stage [6]. The vegetative cells proliferate rapidly through the 1 mm stage. On the basis of the well-established timeline of events in maize anthers, this means that if 400 µm anthers are infected with U. maydis, the fungus will reach the subepidermal cells when the anthers are approximately 700–900 µm, which is after formation of all five cell types and after the earlier acting male sterile mutants affect anther development.

The maize cob, equivalent to the tassel organ, contains the same diverse tissues as the male inflorescence. In both the cob and tassel, florets initiate with perfect flowers (glumes, palea, lemma, lodicules, stamens, carpel); however, in the tassel, the carpels abort, resulting in male-only flowers. In the cob, the stamens as well as the lower florets abort, resulting in a single viable carpel per spikelet. Despite the considerable reduction in rapidly growing tissue in the ear, in the field, ear tumors from the conversion of individual kernels (equivalent to an anther) are a striking feature of U. maydis infection. To date, few experiments have addressed tumor progression in ear tissues. It is unknown whether the same (or homologous or paralogous) host genes contribute to tumor progression or whether U. maydis uses a different suite of effectors to colonize ear cell types compared to tassels.

The specific details of U. maydis infection vary between seedling and adult leaves as well as between leaves and anthers. In U. maydis seedling leaf infections, an extensive biotrophic interface forms around 4 days post-infection (dpi) when the hyphae have often colonized meristematic tissue at the blade base and the bundle sheath and mesophyll cells start to be converted into tumor cells in the fully differentiated distal blade tissue (see Figure 1A) [4][7][8]. At this point, the epidermal and mesophyll cells begin to enlarge, eventually doubling and tripling in size, respectively, by 13 dpi [3]. In anthers, U. maydis reaches the subepidermal cells at approximately 3 dpi, and then extra periclinal divisions are observed in all the somatic tissues [3]. Although middle layer cells typically die early during anther development, in infected anthers, they exhibit both hyperplasia and hypertrophy and are the most obvious site of substantial growth [3]. By 7–10 dpi, the surface of infected tassel organs including anthers are distorted and enlarged, and by 15 dpi, mature tumors begin to split open and release diploid teliospores [9].

More
© Text is available under the terms and conditions of the Creative Commons Attribution (CC BY) license; additional terms may apply. By using this site, you agree to the Terms and Conditions and Privacy Policy.
Upload a video for this entry
Information
Subjects: Agriculture, Dairy & Animal Science
Contributor MDPI registered users' name will be linked to their SciProfiles pages. To register with us, please refer to https://encyclopedia.pub/register :
Alex Ferris
View Times: 112
Revisions: 2 times (View History)
Update Time: 19 Feb 2021
Table of Contents
1000/1000
Hot Most Recent