+1 point
Thank you for your contribution! You can also upload a video entry related to this topic through the link below: https://encyclopedia.pub/user/video_add?id=7251
Check Note
2000/2000
Photoacoustic Imaging Techniques

2D materials can be used as carriers for delivering therapeutic agents into a lesion, leading to phototherapy. Various optical imaging techniques have been used for the monitoring of the treatment process.

The representative phototherapy methods are photothermal therapy (PTT) and photodynamic therapy (PDT)[8]. In PTT, the local heating of NIR-absorbing agents is triggered by NIR light illumination. As tumor cells have difficulty dissipating heat, the NIR-triggered photothermal effect causes selective death of cancerous cells, which can be ablated more than 42 °C through necroptosis and apoptosis, which is programmed cell death, while endowing little damage to normal cells[9]. In contrast, PDT is an indirect method using photosensitizers that generate harmful singlet oxygen (1O2) when they absorb light. As PDT does not generate heat, nanomaterials in PDT usually perform as carriers that transfer photosensitizers using their surface properties[10]. To assess the therapy, drug delivery, and biodegradability, visualization of the internal biodistribution is essential.

Photoacoustic (PA) imaging is a biomedical imaging technique that combines the principles of ultrasound (US) and optical imaging[17]. The principle of PA imaging is based on the PA effect, which involves energy transduction from laser to acoustic waves through thermoelastic expansion (Figure 2). The typical procedure of PA imaging is as follows: (1) illumination of a short (typically a few nanoseconds) pulsed laser beam to target tissue, (2) light absorption and heat release by the optically absorbing chromophores, (3) acoustic wave (i.e., PA wave) generation through rapid thermal expansion and relaxation, (4) signal reception using US transducer, and (5) image generation and display. Because PA imaging inherits the principles of optical and US imaging techniques, it can provide both strong optical contrast and high ultrasound resolution in deep tissue[18][19]. In addition to intrinsic chromophores (oxy- and de-oxy-hemoglobins, melanin, lipids, and water), external agents (organic dyes, liposomal nanoformulations, nanoparticles, and nanostructures) have been widely used to obtain contrast-enhanced PA images[20][21][22][23]. Moreover, using multiple wavelengths of the excitation laser, molecular functional information of biological tissue can be obtained, which can be used for investigating the bio-distribution of external agents in vivo[24][25][26]. 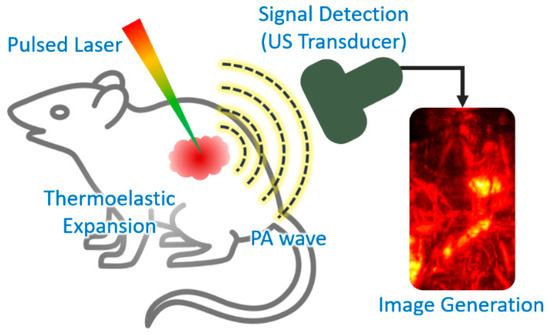 Figure 2. Schematic explanation of the procedure of PA imaging. PA, photoacoustic; US, ultrasound. The inset image is reproduced with permission from[27].

Currently, various phototherapy agents including gold nanostructures[28][29], mesoporous silica nanoparticles[30][31], and 2D nanomaterials have been widely investigated for clinical application. Among them, 2D nanomaterials are attracting the most attention because they can be used not only for phototherapy, but in other biomedical fields thanks to their excellent biochemical properties (Table 2). Typical 2D nanomaterials consist of one or a few atomic layers. As a representative 2D nanomaterial, graphene has a honeycomb structure consisting of carbon atoms. By changing the shape, the number of layers, and chemical modifications, several derivatives can be formed. Among them, graphene oxide (GO)[28] and reduced graphene oxide (rGO)[29][30] have been widely utilized for biomedical applications because of their superior electrical and thermal conductivities, large surface area, chemical versatility, and biocompatibility[31][32][33]. Layered double hydroxides (LDHs) are inorganic 2D nanomaterials with structures in which metal atoms are sandwiched by hydroxide layers. Because of their high charge density with excellent biocompatibility, LDHs are widely used as nano-carriers for theranostic agents in drug or gene delivery, phototherapy, and immunotherapy[34][35][36]. Transition metal dichalcogenides (TMDs) have hexagonal lattices consisting of monolayers of transition metal atoms between chalcogen atom layers. In addition to thin, flexible, and strong characteristics, TMDs are excellent optical absorbers, thus producing photolimunescence and photothermal effects [37][38][39][40]. TMDs can be formed with various materials including molybdenum disulfide (MoS2)[41][42][43][44], tungsten disulfide (WS2)[45][46][47][48], and molybdenum diselenide (MoSe2)[49][50][51]. Transition metal oxides (TMOs) are compounds of oxygen atoms and transition metals such as titanium (TiO2)[52][53] and manganese (MnO2)[54][55][56]. Their wide bandgap results in excellent photochemical and electric properties[57][58]. They can also directly interact with drugs, genes, or other biomolecules by surface modification and thus can be utilized in biomedical applications including drug delivery, cancer therapy, tissue engineering, bio-imaging, and biosensing[59][60][61]. Mxenes are the most recently discovered 2D materials and have been applied in various biomedical applications because of their extreme thinness, large surface area, high surface–volume ratio, and mechanical strength[62][63][64][65][66]. Black phosphoruses (BP) are the most stable allotropes of phosphorus with zigzag or armchair bilayer structures. BP have shown potential in biomedical applications with their strong optical absorption in the ultraviolet (UV) and NIR regions [67][68][69][70][71]. They have also demonstrated promising biocompatibility and biodegradation[72]. 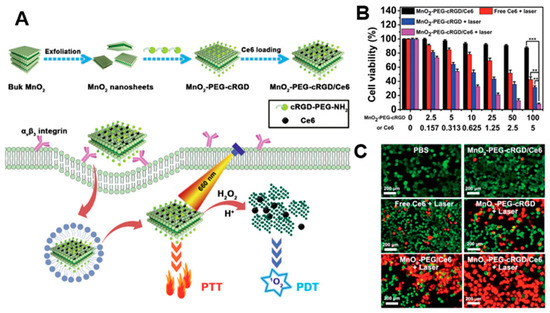 More
© Text is available under the terms and conditions of the Creative Commons Attribution (CC BY) license; additional terms may apply. By using this site, you agree to the Terms and Conditions and Privacy Policy.
Upload a video for this entry
Information
Subjects: Others
Contributor MDPI registered users' name will be linked to their SciProfiles pages. To register with us, please refer to https://encyclopedia.pub/register :
Dong-Wook Han
View Times: 266
Revisions: 2 times (View History)
Update Date: 21 Feb 2021
Table of Contents
1000/1000
Hot Most Recent