Submitted Successfully!
Thank you for your contribution! You can also upload a video entry related to this topic through the link below:
https://encyclopedia.pub/user/video_add?id=7229
Check Note
2000/2000
Polyetheretherketone
Edit
Upload a video
This entry is adapted from 10.3390/ma14020408

Polyetheretherketone (PEEK) is an aromatic, semi-crystalline linear thermoplastic polymer [1] (chemical formula shown in Figure 1). As a member of the polyaryletherketone (PAEK) family, PEEK was developed from bisphenol salts and aromatic dihalides via nucleophilic substitution. With the participation of Williamson ether, the bisphenol salt was produced in situ from bisphenol with either added sodium or added alkali metal carbonate or hydroxide [2]. This chemical structure provides the material with stability at high temperatures (exceeding 300 °C), resistance to chemical and radical damage, greater strength (on a per mass basis) and compatibility with reinforcing agents such as glass and carbon fibers [2][3][4][5].

PEEK has a wide range of applications, including automotive, electronics, aircraft and turbine blades. In the medical field, PEEK has been used in orthopedic treatments, cardiac operations, maxillo-facial surgeries, spinal operations and cranioplasty [6]. PEEK is an essential high-performance dental material, with applications in oral implant [7][8][9], prosthodontics [10][11][12][13][14] and orthodontics [15][16][17]. Vitro and vivo studies demonstrated a satisfactory biocompatibility of PEEK [18][19][20][21]. Moreover, compared with current metal alloys, the compatibility of the elastic modulus between the PEEK biomaterials and human bone may lessen the stress shielding effects on the surrounding bone [4][22][23][24][25].

PEEK has an opaque or greyish color [26] and is not suitable for aesthetic restorations on anterior teeth [27][28]. Therefore, approaches of bonding with resin composites or veneering have been used to obtain aesthetic results [29][30][31][32]. However, these methods also face additional challenges. Achieving satisfactory bond strength of PEEK to resin composites remains difficult because of the low surface energy and inertness of PEEK [30][32][33]. Studies have been conducted to overcome these shortcomings of PEEK [13][34][35][36].

Due to its excellent mechanical properties, PEEK has been used as an implant material, computer-aided design and computer-aided manufacture (CAD/CAM) material, coating material and abutment material [37]. PEEK has a similar Young’s modulus (3–4 GPa) to human bone [23][26][38][39]. Its capability to be combined with other materials was a favorable advantage of this material [40]. For example, PEEK composites reinforced with carbon fibers (CFR-PEEK) had a higher elastic modulus (18 GPa) [41], which is equivalent to human cortical bone and dentin [42]. CFR-PEEK exhibited less stress-shielding when compared to titanium implant [38], as shown in Table 1. Despite its low elastic modulus, the wear resistance of PEEK was comparable to that of metal alloys [43]. Furthermore, since it had good fatigue resistance and exhibited a low creep rate, PEEK was a popular bearing material [17][44]. It was reported that among three types of tested orthodontic wires, the highest flexural strength and creep resistance were observed with PEEK [17]. The tensile properties of PEEK matched those of enamel and dentin, which made it a potential alternative for the framework of prosthodontic restorations [38][43].

The chemical resistance of PEEK helped minimize its biocorrosion, thus avoiding the release of toxic by-products [45]. PEEK was not damaged by exposure to conventional solvents. In addition, due to its distinctive aromatic chemical structure, PEEK also exhibited excellent resistance to gamma and electron beams [46] which were used to sterilize medical devices. Furthermore, due to its radiolucency, PEEK created no artifacts on the magnetic resonance imaging and X-ray radiographs [47]. PEEK had a low water-solubility of 0.5%, with long-term water exposure causing no chemical damage, even at temperatures of up to 260 °C [18]. However, PEEK was bioinert and hydrophobic, thus limiting its direct bone contact ability [48][49]. The improvement of the bioactivity of PEEK implants is much needed and requires further research [50].

PEEK is metal-free and aesthetic and has found use in prosthodontic applications including fixed or removable prostheses [12][15][51]. To acquire a more aesthetic effect, resin composites have been used to cover the opaque and gray PEEK [32]. In addition, surface modifications of PEEK have been investigated to achieve a strong adhesion between PEEK and resin composites.

Furthermore, the satisfactory and excellent biocompatibility of PEEK has been reported [52]. In vitro study showed no evidence of mutagenic or cytotoxic activity of PEEK on human organisms [21][53]. Excellent performance was also observed in investigations on the in vitro cellular biocompatibility for CFR-PEEK [54]. In addition, according to the bone and soft biocompatibility of in vivo studies, there was no toxic damage on fibroblasts or osteoblasts caused by PEEK [19][55].

3. Applications of PEEK in Orthodontics

Due to the increasing aesthetic demand of patients, non-metallic orthodontic wires are becoming increasingly popular [56]. PEEK is highly promising as an excellent alternative to metal alloys. For dental applications, PEEK overcomes some of the main shortcomings of metal alloys, such as poor aesthetics, metal allergies, releasing metal ions and corrosion in the oral environment [15][16][57]. PEEK also avoids the interference of metals with magnetic resonance imaging [17].

Tada et al. [15] evaluated the load-deflection features and frictional properties of PEEK wires, concluding that PEEK wires were suitable as orthodontic appliances. The load-deflection curves displayed similarities among the tested wires, while the differences in the permanent deformation and static friction of all the materials were insignificant. Maekawa et al. [17] studied the three super engineering plastics (SEPs): PEEK, polyetheretherketone (PES) and polyvinylidene fluoride (PVDF), as the base material of orthodontic wires. Compared with other materials, PEEK has good creep resistance, the highest bending strength and lower water absorption, which make it a suitable substitute for metal-free orthodontic wire.

Figure 2a shows the color outward appearance of three SEPs (1.0 mm thick). Better aesthetic appearance was observed in PES and PVDF, rather than the grey and opaque PEEK specimens. As proven in Figure 2b, the typical load–deflection curves of the examined wires indicated that stainless steel (SS) and cobalt-chromium (Co-Cr) wires exhibited greater flexural loads and larger everlasting deformations than the rest of material. In term of deformation, the Nickel-titanium (Ni-Ti) wire had a typical load-deflection curve with no permanent deformation, while SEP wires had the opposite results. Figure 2c displays the bending stress-deflection curves of the specimens. Bending load at 2.0 mm deflection in the three-point test is shown in Figure 2d. PEEK had the greatest flexural load in all of the SEPs. Figure 2e indicates the permanent deformation after the 2.0 mm bending load. Perpetual deformation has not been found in Ni-Ti specimens. On the contrary, less deformation has been observed in SEP samples (PEEK, 0.2 mm; PES, 0.1 mm; PVDF, 0.3 mm). Figure 2f indicates creep deformation of SEP wires after the bending creep test. Among the SEPs, PEEK wires had less creep deformation (less than 1.0 mm deformation after 1 month of bending at 37 °C). 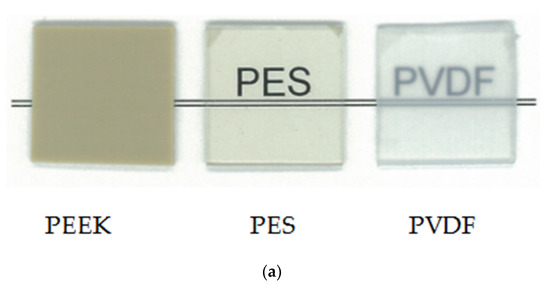 Water absorption at 37 and 121 °C (autoclaving) for 10 days is displayed in Figure 2g. PEEK exhibited a much smaller water absorption (no more than 0.2 wt.% at 37 °C and 0.4 wt.% at 121 °C). Minimal water absorption at 37 °C was found in PVDF due to its hydrophobic nature. In addition, a recent study reported that orthodontic archwires with the PEEK tube had the right combination of aesthetics and functional properties in orthodontic appliances. Passing the archwire through the PEEK tube also reduced the frictional force between the bracket and wires [16]. In addition, PEEK could be used as coatings on Ni-Ti alloy wires to enhance the corrosion resistance and improve the mechanical properties [58]. However, the long-term oral exposure might cause severe deterioration to the stability of PEEK coating [59]. Therefore, further studies are required to evaluate the long-term stability of PEEK-coated orthodontic wires.

Therefore, PEEK makes the treatment more acceptable for patients with aesthetic availability and thus could be regarded as feasible orthodontic wires [17][38]. However, PEEK wire has not been widely used clinically, and there are insufficient data on its long-term mechanical and aesthetic properties in the human oral environment. Moreover, the load-deflection characteristics and static friction of PEEK orthodontic wires might be influenced by oral activities, such as eating, brushing or removing food colorants and stains. As a result, further investigations are required to take the simulated clinical conditions including wet conditions into account [15]。对于PEEK正畸线，还需要对临床负荷条件下的力学性能进行长期研究。

More
© Text is available under the terms and conditions of the Creative Commons Attribution (CC BY) license; additional terms may apply. By using this site, you agree to the Terms and Conditions and Privacy Policy.
Upload a video for this entry
Information
Subjects: Polymer Science
Contributor MDPI registered users' name will be linked to their SciProfiles pages. To register with us, please refer to https://encyclopedia.pub/register :
Junling Wu
View Times: 395
Revisions: 3 times (View History)
Update Time: 18 Mar 2021
Table of Contents
1000/1000
Hot Most Recent