Submitted Successfully!
Thank you for your contribution! You can also upload a video entry related to this topic through the link below:
https://encyclopedia.pub/user/video_add?id=7226
Check Note
2000/2000
Biodiesel Production Technologies
Edit
Upload a video
This entry is adapted from 10.3390/su13020788

Dependence on fossil fuels for meeting the growing energy demand is damaging the world’s environment. There is a dire need to look for alternative fuels that are less potent to greenhouse gas emissions. Biofuels offer several advantages with less harmful effects on the environment. Biodiesel is synthesized from the organic wastes produced extensively like edible, non-edible, microbial, and waste oils.

Biodiesel is a biodegradable, energy competitive, and renewable resource with the ability to meet the energy need of the world [1][2]. It is the feasible solution replacing fossil fuels causing ozone depletion and environmental degradation. It is a renewable fuel that emits fewer emissions on burning and it can be implemented to existing petroleum diesel engines without retrofitting. It is also referred to as Eco-Diesel (particularly when derived from Pig Pancreatic Lipase) [3]. Biodiesel is usually known by its primary feedstocks including vegetable oils and animal fats [4]. Since the carbon present in oils is generally originated from carbon dioxide present in the air (uptake by a plant in photosynthesis), biodiesel’s contribution to global warming is much lesser than fossil fuels. Use of biodiesel as a potential energy source offers the advantage of sustainability since the CO2 released on combustion will be used again by nature for feedstock preparation, an effect called ‘Closed Carbon Cycle’ or ‘Carbon Neutral Cycle’. Figure 1 shows the carbon dioxide closed cycle for biofuels. This represents the process that when renewable plant source is converted into biodiesel, emission with zero carbon dioxide takes place. 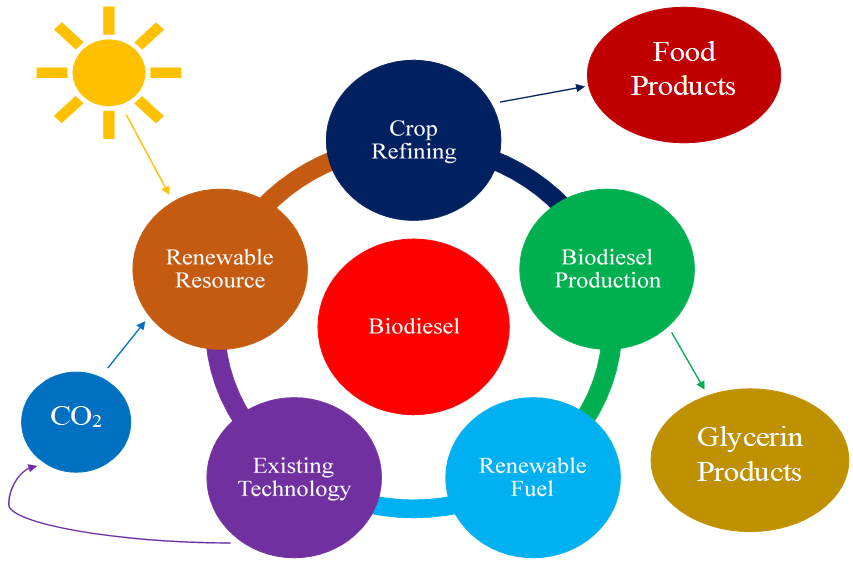 Like petro-diesel fuel, it can be easily stored anywhere as it has good storage properties. The chemical hazards and risks associated with handling, transportation, and storage of the biodiesel are less than the conventional diesel fuel. Biodiesel can be handled safely because of its biodegradability and greater flash point than petro-diesel [5]. Biodiesel is produced through transesterification using diverse feedstocks resources like edible, non-edible, and waste oils. The synthesis of biodiesel using waste cooking oil and animal fats offers a potential market to use waste oils [6]. The selection of feedstock has a notable effect on biodiesel synthesis as 70% of the product cost depends on the feedstock. This review highlights the advantages and disadvantages of commonly used feedstocks for sustainable biodiesel production. However, this study highlights the best available technologies for oil extraction so that the use of non-edibles can be made possible for oil extraction to implement for sustainable biodiesel production.

At present, more than 350 oil-producing crops have been considered globally as a potential source of triglycerides to produce biodiesel. The selection of suitable feedstock is the critical factor to produce biodiesel [7]. Preferably, suitable feedstock must fulfil two demands, which are industrial-scale production with the minimum associated cost.

Figure 2. The oil content of feedstocks for biodiesel synthesis [11][12].

The first-generation feedstocks are considered as readily available sources to produce biodiesel. The edible oils include palm [13][14], coconut [15], olive, mustard, soybean [16], rapeseed [17], and sunflower oil [18]. The application of edible oils over the years has affected the supply, since this practice affects the food market globally, destabilizing the availability and prices. Therefore, edible oils are too costly to be used for fuel production since they have a high demand for food [19]. Hence, the world may face the ‘food vs. fuel’ soon if the use of first-generation feedstocks for biodiesel synthesis continues. Their applicability to synthesize biodiesel can cause an increase in the cost of both biodiesel and oils [14]. The process has negative effects on the environment due to its demands for a larger area of land for feedstock cultivation. This causes deforestation especially in tropical regions including Indonesia and Malaysia, supplying greater than 75% of palm oil supply to the world. Continuation of this practice for biodiesel synthesis would damage flora and fauna, with influences culminating in weather changes. The investigation of alternative feedstocks for biodiesel synthesis was aimed to decrease the dependence on first-generation feedstocks [20]. The application of non-edible oils to synthesize biodiesel is considered beneficial in comparison to edible oils to avoid the food crisis and make the biodiesel as a cost-effective process. The oil extraction and processing for biodiesel synthesis is a complex process that increases the overall production cost [21]. The second-generation feedstocks discussed above are available in large amounts in nature because of the lack of competition with food [22]. The growth rate and yield of seeds of non-edible oil plant are much lesser. The non-edible oils-producing plants have an excellent vegetative growing capacity, but the quantity of seeds obtained from a single plant is very minimal [23]. The classification of various feedstocks based on the composition of fatty acids is given in Table 1.

Extraction of oils from non-edible oils sources is a complex process that leads to the increase of cost of non-edible oil biodiesel [24]. Moreover, oils yield from seeds is low and the process of oil extraction is complex, making them an inappropriate choice. These drawbacks are considered as a hurdle to use them for industrial biodiesel synthesis [25][26]. The comparison of the cost of plantation and oil yield for various edible and non-edible oils is presented in Table 2. Among edible oils, palm oil feedstock has the highest oil yield with a slightly higher cost. Similarly, the cost of cultivation is also higher among others giving a higher oil yield.

Table 2. Comparison of cost of plantation and oil yield of edible and non-edible oils.

More
© Text is available under the terms and conditions of the Creative Commons Attribution (CC BY) license; additional terms may apply. By using this site, you agree to the Terms and Conditions and Privacy Policy.
Upload a video for this entry
Information
Subjects: Energy & Fuels
Contributor MDPI registered users' name will be linked to their SciProfiles pages. To register with us, please refer to https://encyclopedia.pub/register :
Farooq Sher
View Times: 166
Revisions: 2 times (View History)
Update Time: 18 Feb 2021
Table of Contents
1000/1000
Hot Most Recent