Submitted Successfully!
Thank you for your contribution! You can also upload a video entry related to this topic through the link below:
https://encyclopedia.pub/user/video_add?id=7120
Check Note
2000/2000
Solar Thermal Systems Exergy Analysis
Edit
Upload a video
This entry is adapted from 10.3390/en14030724

A major challenge encountered by the application of solar heating systems is the continuity of their operation when there is no sunshine, i.e., during off-sunshine periods [1][2][3]. In response, researchers have either adopted supplementary heating systems using electric heaters or biomass furnaces [4] or have integrated thermal storage materials [4]. The application of thermal storage materials involves materials (rocks, bricks, water, concretes, etc.) that utilize their sensible heat energy, thermochemical reactions, and those that apply both sensible and latent heat energy (phase change materials) such as hydrated salts, fatty acid paraffin and non-paraffins like glycerol, etc. [5][6]. The advantage of phase change materials (PCM) is that they evolve large energy density over a narrow temperature range as the material changes from liquid to solid or vice versa [4] as shown in Figure 1. Kenesarin and Mahkamov [5] and Sharma and Sagara [7] have comprehensively reviewed available PCMs and their applications as thermal storage in the solar energy system and their application as thermal storage materials in energy storage systems in housing, spacecraft, vehicles, space heating, desalination, solar dryers, water heating, etc. In their discussion, they classified the PCMs as organic materials, mainly present as fatty acids with melting temperatures of −5 to 71 °C and inorganic materials present mostly as hydrated salts. They also analyzed the structural compatibility of the PCM chemical composition and concluded that research on inorganic PCMs needed time for commercial application. This is because PCMs, especially hydrated salts, suffer from the problem of supercooling (“phase irreversibility”) and phase segregation in the thermal process [8]. This has been observed for sodium sulfate decahydrate (Na2SO4·10H2O) when used in solar drying [9], though researchers have suggested adding nucleating agents, thickening agents, direct contact heat transfer, encapsulation, rotating storage, and rotary storage devices [8] to address this issue. 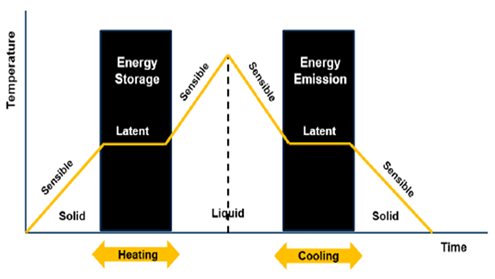 Despite this shortcoming, the large energy density carrier of PCMs has made them attractive in solar heating systems while researchers are working to overcome the problems associated with hydrated salts [11]. However, the performance of solar systems adopting PCMs as thermal storage can only be assessed if the thermal behavior of the PCM while in the system is known. Several studies dealing with this aspect have considered different configurations and positions of the PCM in the system. This thermal behavior of the PCM has been established in relationship with its position within the system. For example, Ndukwu et al. placed the PCM on the solar collector chamber during charging and moved it into the drying chamber during discharging in a solar dryer, while Ortega and Carmona [12] and Ghiami et al. [13] placed their PCMs under the collector as shown in Figure 2. Nkwetta, and Haghighat [14] encapsulated the PCM in the solar system while Li et al. [15] placed the PCM in a storage tank. Abdulmunen et al. [16] embedded the solar fin into a PCM in a solar collector.

Recent reviews in the literature have also presented the thermal behavior of PCM in solar heaters in terms of their thermo-physical properties, sensible and latent heat energy [17], thermal storage abilities [18][19], application in buildings [20], application in solar absorption refrigeration systems [21], integration of nano-fluids [22][23][24], progress in thermal storage and recovery of industrial waste heat [25] and application in cold storage [26][27]. However, to properly understand the thermodynamic performance of the system units, energy and exergy analysis approach has always been adopted. Many researchers are of the opinion that exergy analysis provides a better understanding of the thermodynamic performance of energy systems and it is the future of research if the efficiency of energy systems is to be improved. Jegadheeswaran et al. [28] have emphasized the need of exergy studies based on the analysis and continuous update on exergy evaluation techniques for different system applications. The analysis was based on the configuration of the heat flow, the position or method of integration of the latent heat storage material in the system and the heat carrying fluids. Elucidating exergy analysis methods is vital in improving the operation of the thermodynamic systems and designing energy systems to obtain higher efficiency. Therefore, this study is intended to present a review of the exergy based thermodynamic analysis for some solar system configurations that have adopted PCMs as thermal storage. This is to present a guide for further studies on this area.

The evaluation of the thermodynamic performance of energy systems can be performed using the energy conservation principle which is based on the first law of thermodynamics or the concept of exergy based on the second law [29]. Exergy is the maximum extractable amount of work from a thermodynamic system as it equilibrates with the surroundings [30][31]. Obtaining higher energy output from a thermodynamic system makes the operation attractive. During energy flow, losses occurring within the system components which affects the total energy output from these systems. The magnitude of these losses varies from one component to another and at different points along the energy streams. Accounting for these losses based on individual components as embodied in the concept of exergy helps to know the components that requires improvement for better optimization and design of the energy systems, which the first law does not give room for. In a properly insulated solar system integrated with a PCM, the energy analysis during the PCM cycle will give 100% efficiency because the latent heat of solidification and melting which is equal to the output and input energy is the same. However, there is irreversibility which will lead to energy destruction. Exergy does not only identify irreversibility (therefore cannot be conserved) but also where it occurs and the degree of this irreversibility. This will lower the output exergy which is why the exergy efficiency is lower than energy efficiency since both is expressed as a ratio of output to input of each adopted principle. The more exergy is destroyed within the system, the more entropy is generated, which indicates the unavailability of thermal energy for conversion into mechanical work. Consequently, exergy is proportional to the produced entropy, as the system approaches equilibrium with the surroundings, which decreases the efficiency of the system to zero. 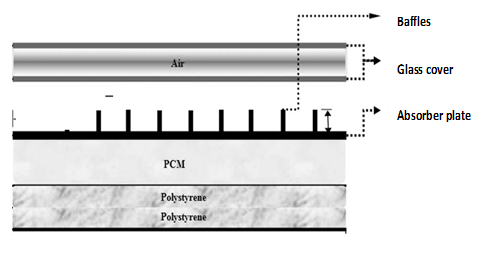 Most importantly, exergy is related to the concept of environmental sustainability. Minimizing system losses (increased exergy efficiency) will limit energy waste into the surroundings. Ndukwu et al.  have reported that exergy waste might upstage the thermodynamic equilibrium of the environment by interfering with the presence of atmospheric CO2, which can lead to solar re-radiation. Thus, exergy analysis evaluates energy both quantitatively and qualitatively [32][33]. In the analysis of the exergy of most solar heating systems with or without sensible heat, three exergy streams have always been identified, viz: exergy of the solar radiation, exergy of the heat transfer fluid and exergy exchange within the product of which the stream is applied to in the case of drying as shown in Equations (1)–(3) below [34][35]:

However, when a PCM is applied in a solar heating system, the exergy analysis includes the phase change exergy. In most exergy analysis of solar systems involving the solar collector (receiver) and PCM storage, researchers have separated the two components and analyzed their respective exergy streams. Pertaining to the exergy analysis for PCMs factors such as thermal storage, mass ratio, melting (charging) temperature, discharging (solidification) temperature, mass flow rate and the number of transfer units are taken into consideration, assuming that the PCM is a reservoir of thermal energy with constant melting temperature while the temperature of flowing air varies along with its flow path [32]. This is because the process of charging and discharging of a PCM involves the receiver transferring the high temperature into the heat transfer fluid which was at low temperature. This temperature mix raises the temperature of the heat transfer fluid (HTF), partly absorbed by the PCM. The PCM melts at its melting temperature. As the HTF exhausts and returns-back to the receiver or the ambient depending on the system design to complete the charging cycle, the PCM cools by releasing the latent heat of fusion. Hence, the exergy analysis is evaluated during both the charging and discharging periods. The assessment of thermodynamic performance of any system integrated with PCM requires the operational configuration of the system, including the trajectory of the HTF, point of heat contact of the PCM, geometric and other design parameters of the system. Exergy efficiency is carried out to determine the maximum recoverable energy from the system since entropy generation destroys efficiency of the system. Nevertheless, adoption of the PCM though helps the functionality of the system, however, it generates entropy (Equations (4) and (5)) in the heat storage process during the charging and discharging of the PCM and also due to HTF flow across the heat exchanger. Li et al. expressed the entropy generated for PCM as follows:

El-Dessouky and Faisal [36] gave the entropy of PCM during charging as:

More
© Text is available under the terms and conditions of the Creative Commons Attribution (CC BY) license; additional terms may apply. By using this site, you agree to the Terms and Conditions and Privacy Policy.
Upload a video for this entry
Information
Subjects: Energy & Fuels
Contributor MDPI registered users' name will be linked to their SciProfiles pages. To register with us, please refer to https://encyclopedia.pub/register :
Lyes BENNAMOUN
View Times: 169
Revisions: 2 times (View History)
Update Time: 09 Feb 2021
Table of Contents
1000/1000
Hot Most Recent