Submitted Successfully!
Thank you for your contribution! You can also upload a video entry related to this topic through the link below:
https://encyclopedia.pub/user/video_add?id=7034
Check Note
2000/2000
Fluoxetine-Mediated CYP2D6 Inhibition
Edit
Upload a video
This entry is adapted from 10.3390/pharmaceutics13020148

Fluoxetine is still one of the most widely used antidepressants in the world. The drug is extensively metabolized by several cytochrome P450 (CYP450) enzymes and subjected to a myriad of CYP450-mediated drug interactions. In a multidrug regimen, preemptive mitigation of drug–drug interactions requires knowledge of fluoxetine actions on these CYP450 enzymes. The major metabolic pathway of fluoxetine leading to the formation of its active metabolite, norfluoxetine, is mediated by CYP2D6. Fluoxetine and norfluoxetine are strong affinity substrates of CYP2D6 and can inhibit, potentially through various mechanisms, the metabolism of other sensitive CYP2D6 substrates. Remarkably, fluoxetine-mediated CYP2D6 inhibition subsides long after fluoxetine first passes through the liver and even remains long after the discontinuation of the drug. The long-term inhibition of CYP2D6 is likely a result of competitive inhibition due to 1) the strong affinity binding of fluoxetine and norfluoxetine to the enzyme and 2) unbound fluoxetine and norfluoxetine levels circulating in the blood for a long period of time because of their long elimination half-life.

Patients presenting with several chronic conditions such as psychiatric disorders, cardiovascular disorders, diabetes, and rheumatoid arthritis often require multiple therapeutic approaches, including the use of numerous drugs, to achieve clinical benefits and experience favorable outcomes [1][2][3][4]. The co-administration of multiple drugs required to treat complex conditions and associated comorbidities can lead to major pharmacokinetic and/or pharmacodynamic drug–drug interactions (DDIs) [5][6][7]. These circumstances also impact drug safety, adherence, and efficacy [8][9]. The cytochrome P450 (CYP450) monooxygenase superfamily of enzymes is commonly involved in the metabolic processes regulating drug disposition [10][11]. CYP450 enzymes are responsible for metabolizing about 75% of all prescribed medications and contribute greatly to DDIs in patients with polypharmacy [12].

In recent years, an increased incidence of depression with an associated increase in the use of antidepressants has been noted [13][14][15][16]. Fluoxetine is still one of the most widely used antidepressants worldwide, with 21,913,276 prescriptions filled in the United States in 2017 [17]. Fluoxetine is a selective serotonin reuptake inhibitor (SSRI) indicated for the treatment of psychiatric conditions such as major depressive disorder, obsessive compulsive disorder, bulimia nervosa, and panic disorder [18]. Eli Lilly received patent protection for fluoxetine in 1974, and the drug was approved in the USA for medical use in 1987 [19]. It is considered one of the most stimulating SSRIs; this property, along with its a rather favorable side-effect profile, offers clinical advantages [20][21]. It is well recognized that CYP2D6 is the major CYP450 enzyme involved in the metabolism of fluoxetine [22]. CYP2D6 is also known to be involved in the metabolism of opioid painkillers, such as tramadol and codeine, beta-blockers, class I antiarrhythmic drugs, first-generation H1-antagonists, tricyclic antidepressants, and other small amine-containing compounds [23][24][25]. Concomitant use of fluoxetine with any of these agents poses a risk for potential DDIs leading to therapeutic failure or adverse reactions. More importantly, inhibition of CYP2D6 by fluoxetine has been reported to subside long after fluoxetine first passes through the liver and even lingers long after the discontinuation of the drug [26][27]. In this review, we aim to shed light on the mechanisms of fluoxetine-mediated CYP2D6 inhibition and its interactions with other CYP450s (CYP2C9, CYP2C19 and CYP3A4). We discuss whether fluoxetine is either a perpetrator or victim drug and whether fluoxetine interactions with various CYP450s may lead to reversible or irreversible inhibition.

Fluoxetine is extensively metabolized by various CYP450s such that only ~2.5% of the administered dose is excreted unchanged in urine [28]. The N-demethylation of fluoxetine produces norfluoxetine, an active metabolite with potent serotonin selective reuptake inhibition (SSRI) activity [21]. Other metabolic pathways include glucuronidation and O-dealkylation converting fluoxetine into p-trifluoromethylphenol which subsequently is transformed into hippuric acid, a glycine conjugate [29][30][31]. Fluoxetine metabolism to norfluoxetine is stereoselective and involves CYP2D6, CYP2C9, and possibly CYP2C19 (Figure 1). In vivo in humans, it is evident that CYP2D6 plays a much greater role than any other enzyme [22][32]. Since fluoxetine remains under various conditions a possible substrate of all these enzymes, the likelihood of DDIs when co-administered with other drugs is real. However, the extent or significance of these interactions depends on whether fluoxetine acts as a victim drug or perpetrator drug at each of these enzymes. 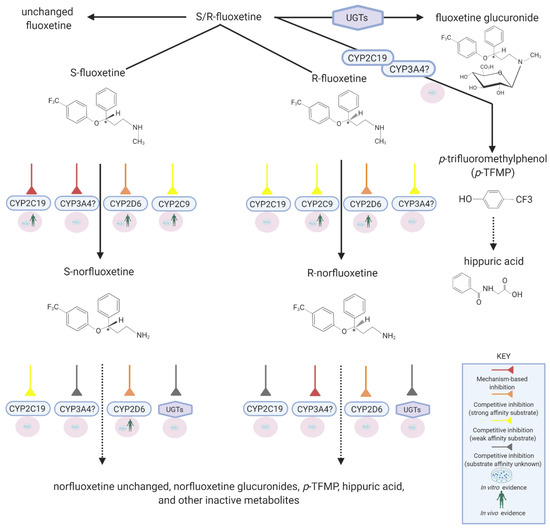 3. Mechanism of CYP2D6 Inhibition by Fluoxetine

S-Fluoxetine and S-norfluoxetine are both substrates and exhibit a high binding affinity to CYP2D6 (Ki = 68 nM and 35 nM, respectively; Ki is reflective of the binding affinity of a potential inhibitor; the lower the Ki, the higher the binding affinity is and smaller the amount of the drug needed in order to inhibit the activity of that enzyme) [35]. Thus, it is clear that competitive inhibition with sensitive CYP2D6 substrates is expected, and that fluoxetine and norfluoxetine will likely act as perpetrator drugs for several other CYP2D6 substrates. Accordingly, fluoxetine administration for 8 days is associated with a significant decrease in dextromethorphan clearance (a sensitive CYP2D6 substrate) and metabolism to dextrorphan: a 9- to 18-fold increase in the dextromethorphan/dextrorphan ratio [26][36]. Remarkedly, however, as is discussed further below (see Section 5), it took two to three weeks after discontinuation of fluoxetine for CYP2D6 activity to return back to baseline [26][27]. Understanding the exact mechanism of this prolonged inhibition of CYP2D6 activity poses certain challenges.

Second, fluoxetine could be a mixed CYP2D6 inhibitor, i.e., exhibiting both competitive and noncompetitive inhibition. This mechanism of inhibition gives rise to very potent enzyme inhibitors, often acting as perpetrator drugs with other sensitive substrates, while their pharmacokinetics are not affected by other inhibitors of the same enzyme [38]. In vitro studies showed that quinidine (a potent CYP2D6 inhibitor) was capable of inhibiting the N-demethylation of fluoxetine with a magnitude similar to that observed with anti-CYP2D6 antibodies [33][39]. These data suggest that the probability of noncompetitive CYP2D6 inhibition by fluoxetine is rather unlikely but leave open the possibility for competitive inhibition.

More
© Text is available under the terms and conditions of the Creative Commons Attribution (CC BY) license; additional terms may apply. By using this site, you agree to the Terms and Conditions and Privacy Policy.
Upload a video for this entry
Information
Subjects: Others
Contributor MDPI registered users' name will be linked to their SciProfiles pages. To register with us, please refer to https://encyclopedia.pub/register :
Pamela Dow
View Times: 208
Revisions: 2 times (View History)
Update Time: 04 Feb 2021
Table of Contents
1000/1000
Hot Most Recent