Submitted Successfully!
Thank you for your contribution! You can also upload a video entry related to this topic through the link below:
https://encyclopedia.pub/user/video_add?id=7009
Check Note
2000/2000
Uterosacral Ligament
Edit
Upload a video
This entry is adapted from 10.3390/jcm10030437

The uterosacral ligaments (USLs) are extraperitoneal structures that extend backward from the posterior surface of the cervix and upper vagina to the second-to-fourth sacral vertebrae, forming the lateral boundaries of the rectouterine and rectovaginal spaces. They are composed mainly of connective tissue along with vessels and splanchnic nerve fibers.

The uterosacral ligaments (USLs) are extraperitoneal structures that extend backward from the posterior surface of the cervix and upper vagina to the second-to-fourth sacral vertebrae, forming the lateral boundaries of the rectouterine and rectovaginal spaces. They are composed mainly of connective tissue along with vessels and splanchnic nerve fibers[1]. The USLs are surrounded by the paracervical and parametrial tissues, which are fibrous and fatty connective tissues rich with vessels and nerves. These structures can be clinically evaluated by a combined rectovaginal examination and by ultrasound, and they may be the site of diseases such as endometriosis and the later stages of cervical cancer.

Endometriosis is a common, chronic, and debilitating gynecological condition that affects between 5% and 15% of women of reproductive age[2][3]. It is characterized by the growth of tissue that looks and acts like endometrial tissue, exhibiting the same response to hormonal changes; however, this abnormal tissue growth occurs outside the uterus, usually on other organs inside the pelvis and in the abdominal cavity. These growths, called endometriosis implants, lead to local inflammatory reactions that, in turn, promote a fibrotic reaction and the formation of adhesions, which prevent organs from sliding along each other normally and can result in an altered normal pelvic anatomy[4][5][6]. This cascade of events often causes menstrual and/or chronic pelvic pain, infertility, or malfunction of the affected abdominopelvic organs[2].

Cervical cancer arises from the cervix and may invade adjacent structures, such as the vagina and the paracervical tissue, as it progresses. From the International Federation of Gynecology and Obstetrics (FIGO) stage IIB onwards, the cancer may spread further to the USLs and to more distant organs[13]. The estimated incidence of cervical cancer is of 15.7 per 100,000 women, although incidence varies widely among countries, with a generally high prevalence of early-stage cervical cancer due to cervical screening programs[14]. Extracervical cancerous lesions require a more aggressive treatment and are associated with higher case-fatality rates[14][15].

The uterosacral ligaments are retroperitoneal structures that extend posteriorly from the uterine cervix to sacrum, defining the lateral boundaries of the rectouterine and rectovaginal spaces (Figure 1). From an anatomical perspective, the USL can be divided into three parts: cervical, intermediate, and sacral sections[1]. The cervical section is composed of dense connective tissue containing small blood vessels and small branches of the inferior hypogastric plexus (IHP).

The parametrium is the fibrous and fatty connective tissue that surrounds the uterus. It is bordered laterally by the internal iliac vessels, medially by the uterus, superiorly by the peritoneum, and inferiorly by the ureter. This tissue contains the uterine artery and the superficial uterine vein[17].

The paracervix is the fibrous and fatty tissue that lies beneath the parametrium (Figure 1)[18]. Like the parametrium, it is bordered laterally by the internal iliac vessels, but its medial border is the upper two-thirds of the vaginal wall and the insertion of the USL. It is the upper part of the paracolpium that contains important functional nerves and vessels. The upper limit of the paracervix is the ureter and the lower limit is the levator ani muscle and the presacral fascia. The paracervix contains the inferior vesical artery, the vaginal artery, the proximal part of the deep uterine vein, the pelvic splanchnic nerves, the distal part of the hypogastric nerve, and the IHP.

5. What Ultrasound Should Investigate and Detect

Ultrasound visualization of the USL can be obtained using a transvaginal approach[19]. These images can be used to assess the presence of disease and determine if there is any parametrial involvement. For this procedure, the ultrasound probe is placed in the posterior vaginal fornix in longitudinal axis and then rotated laterally of about 45°, showing the hyperechoic USL. Disease (either endometriosis or cancer) appears as a hypoechoic lesion that alters the regular (fibrotic) pattern of the ligament. Parametrial involvement may be seen as an extension (same echogenicity) of the primary lesion more distant from the probe.

The cervix should appear on one side of the image to ensure that the edge of the ligament that is closest to the cervix can be assessed. The first important consideration during ultrasound of the USL is to not push the probe upwards while it is correctly placed. This method allows for clear visualization of not only the USL, but also the parametrium (distal to the probe) and, most importantly, the paracervix (proximal to the probe). As shown in Figure 2, we placed a 5 Ti-CronTM polyester suture (a heavy braided suture for orthopedics, diameter 0.7 mm) along a physiological USL during surgery to confirm the ultrasound visualization of the ligament. In this way, we could simultaneously visualize the vaginal wall, the paracervical tissue, the USL, and the parametrium. All structures could be visualized from the probe to more distant regions (Supplementary Materials Video S1).

Another important consideration is that, during the ultrasound, strongly pushing the probe to make the USL closer to the vagina may result in a displacement (rotation) of the ligament, which can mask the actual extent of the lesion (Figure 3 and Supplementary materials Video S2).

To obtain a correct visualization of both the USL and the paracervical and parametrial tissues, we suggest not only relying on the subjective feeling of the operator (i.e., not pushing), but also visualizing the small vessels within the lowest part of the USL using color Doppler (Figure 4 and Supplementary Materials Video S3). These thin vessels may be temporarily closed by pushing the probe. Ligament rotation and vessel disappearance are particularly evident for endometriosis lesions but are less pronounced in cases of cervical cancer spread, as the latter lesions are integral with the cervix (Figure 5) and the cervix is less easy to rotate. 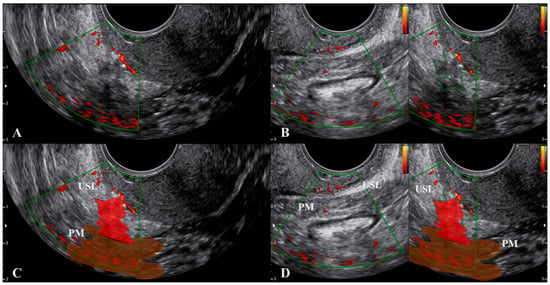 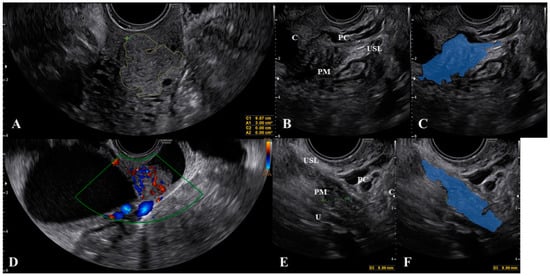 Recently, fusion imaging has gained interest for determining USL and parametrial involvement in endometriosis and cervical cancer spread[23][24][25]. Fusion imaging, also referred to as real-time virtual sonography, displays live ultrasound imagery and previously-acquired MRI images side-by-side on a single screen. This technique requires an average of 13 min to perform[24], but early work has shown that it may improve the detection rate of parametrial involvement[23][24]. Larger studies are required to confirm these pivotal findings. One of the main advantages of fusion imaging is the visualization of peripheral nerves (i.e., the hypogastric nerve). Peripheral nerves cannot be seen via ultrasound but are visible with an MRI; although MRI is multiplanar, it is more expensive, requires between 20 and 30 min to be completed, and does not allow a real-time evaluation. During fusion imaging, the MRI image reconstruction follows all ultrasound probe movements (real-time evaluation), making it possible to obtain oblique sections with a clear visualization of nerves[25].

More
© Text is available under the terms and conditions of the Creative Commons Attribution (CC BY) license; additional terms may apply. By using this site, you agree to the Terms and Conditions and Privacy Policy.
Upload a video for this entry
Information
Subjects: Obstetrics & Gynaecology
Contributor MDPI registered users' name will be linked to their SciProfiles pages. To register with us, please refer to https://encyclopedia.pub/register :
Marco Scioscia
View Times: 1048
Revisions: 2 times (View History)
Update Time: 08 Feb 2021
Table of Contents
1000/1000
Hot Most Recent