Submitted Successfully!
Thank you for your contribution! You can also upload a video entry related to this topic through the link below:
https://encyclopedia.pub/user/video_add?id=7006
Check Note
2000/2000
Green Electric Power Development
Edit
Upload a video
This entry is adapted from 10.3390/su13020708

The green development of electric power is a key measure to alleviate the shortage of energy supply, adjust the energy structure, reduce environmental pollution and improve energy efficiency.

Energy is an essential material foundation for the human to achieve economic development and improve living standards [1][2], which is particularly important for modern economy [3]. In the face of growing energy shortages and environmental problems, the main strategies of most countries in the world are to develop and utilize renewable energy, promote the construction of a clean, low-carbon, safe, and efficient energy system dominated by renewable energy [4], adopt energy-saving and emission reduction strategies [5], and develop renewable energy technologies [6]. The existing energy system in China has provided the inexhaustible impetus for its economic rise [7]. According to OECD (Organization for economic cooperation and development) statistics; China has become the largest primary energy consumer and greenhouse gas emitter in the world. With the ever-increasing constraints on energy resources, the contradiction between extensive use of energy and ecological civilization’s construction has become increasingly irrational [8]. Resource and environmental problems have become the key to restrict China’s social development, so it is urgent to control greenhouse gas emissions [9]. Green and low-carbon development has become a significant strategy for China’s economic and social development and a critical approach to ecological civilization construction [10]. The power industry is at the core position in the modern energy system. As a significant industry of energy consumption and pollutant emissions, it needs transformation and upgrading and plays a vital role in reducing greenhouse gas emissions [11]. Efforts should be made to develop green power [8] (refers to renewable energy power supply, which is easier to obtain than traditional power [12], with wind power, solar energy, and biomass energy as the core). However, due to the randomness, volatility, intermittency, and uncertainty of renewable energy power generation, large-scale access brings severe challenges to the stable and safe operation of the power system [13][14], which restricts the green development of China’s power industry. Therefore, it is urgent to study the weak links in the green development path of China’s electric power, promote the transformation and upgrading of China’s power green, and make remarkable contributions to building a beautiful China and promoting the construction of a community of shared future for humanity.

2.1.1. The Proportion of Clean Energy Consumption Is Increasing

During the “13th Five-Year Plan” period, China’s energy consumption growth has gradually slowed down, and the overall consumption structure has been optimized. China is on the road to “building a clean, low-carbon, safe, and efficient energy system” and gradually promotes a clean and low-carbon consumption model.

2.1.2. The Green Transformation of the Power Supply Structure Continued

To prevent and resolve the risk of coal-fired power overcapacity and accelerate the green development of electric power, the growth rate of the new installed capacity of China has gradually slowed down, and the power structure has been continuously optimized. Wind power and photovoltaic power generation (PV) have gradually become an important part of renewable energy [15][16][17]. Since 2010, the ratio of installed thermal power in China has been gradually decreasing and the proportion of installed non-fossil energy has been increasing gradually. Installed wind power, photovoltaic, and other new energy power generation have been multiplying, becoming the new main force of power supply, and the installed structure of power supply has been constantly optimized. The form of China’s installed generating capacity from 2010 to 2018 is shown in Figure 1 [18]. 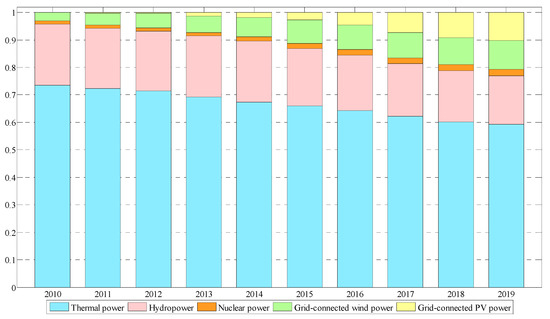 2.1.3. The Electricity Consumption Structure Presents a Clean and Low-Carbon Trend

2.2.1. The Embodiment of Active International Responsibility

As the largest developing country globally, China has pledged to reduce its carbon emission intensity by 40–45% by 2020 compared with 2005, and by 2030 it will reduce its carbon intensity by 60–65% compared with 2005. To realize its carbon emission commitment, China has made great efforts to develop an economic model with efficient use of resources and environment friendly as the core and the principle of “3R” (reduce, reuse, resources), actively promote energy substitution and optimize energy consumption structure to improve the increasingly severe environmental problems [20]; meanwhile, China will improve the policies of energy policy including energy tax policy, energy investment policy, industrial policy and energy consumption policy, and propose quota, and emission trading plan. In December 2017, taking the power generation industry as a breakthrough point, the national carbon emission trading system was officially launched by the national development and Reform Commission. Other high energy consuming and high emission industries were gradually having to expand the market coverage [21]. This system is expected to include more than 3 billion tons of carbon emissions, surpassing the EU carbon emissions trading system, and becoming the world’s largest carbon market [22]. Whether China can achieve the goal of carbon emission intensity by 2030 has been highly concerned. Relevant scholars make reasonable predictions based on China’s national conditions, and the prediction of carbon emission intensity target is relatively ideal [23][24][25]. However, to achieve the goal of carbon emission intensity smoothly, China still needs to play the role of government supervision and policy guidance [26].

The energy white paper published in 2007, “China’s Energy Situation and Policy” started China’s energy change [27]. At present, China’s energy strategy is to promote the transformation of the energy development mode. By 2020, a “safe, green, and efficient” energy system should be initially constructed and formed by 2030. There are many macro development strategic plans in China have put forward explicit constraints on energy structure and consumption, as shown in Table 1. The implementation of the first energy law is accelerating, and renewable energy is about to become a priority area for energy development.

3. Challenges of Green Development of Electric Power in China

Under the influence of the resource endowment characteristics of “rich coal, lack of oil, and less gas” in China, thermal power will still be a primary supporting power source for a long period and the rapid development of wind power and solar energy will not be enough to change this power generation pattern. After 2020, China’s renewable energy will have market competitiveness [28][29], and after 2030, China’s thermal power industry will gradually enter into a recession [30]. At present, China’s power supply structure is dominated by thermal power generation. Coal accounts for a relatively large proportion of energy consumption [31], accounting for 57.7% [32]. The study confirms that increased energy consumption is the main cause of increased carbon emissions [33][34][35]. To realize the promise of carbon emission reduction in 2030, it is urgent to change the current coal-based energy consumption structure through the green transformation of electricity.

Figure 2. Energy consumption per unit GDP of major countries in the world in 2018.

3.3. The Contradiction between the Development and Utilization of New Energy

In 2019, the national average abandonment rate of wind and solar was 4% and 2%, respectively, and the phenomenon of abandoning wind and solar still exists. By 2020, China aims to install 350 million kilowatt-hours of hydropower, 200 million kilowatt-hours of wind power, and 110 million kilowatt-hours of solar power, respectively. It is urgent to solve the contradiction between the development and consumption of new energy. Otherwise, the phenomenon of energy abandonment will be further aggravated. For many years, to promote the development of the renewable energy industry, China has been adopting the mode of “benchmarking electricity price + government financial subsidy.” The subsidy fund comes from the renewable energy price surcharge, which is charged with the electricity fee. With the rapid growth of wind power and photovoltaic installed capacity, the subsidy gap continues to expand. The existing pricing mechanism of new energy products has defects and the evaluation mechanism is not perfect, which is not conducive to the balanced development of the new energy industry [36]. The “Notice on Matters Related to Photovoltaic Power Generation in 2018” (Fagai Energy [2018] No. 823) stated that the principle of “reduction of both ordinary photovoltaic and distributed photovoltaic” was determined in the electricity price, and the scale of photovoltaic construction was reduced. The decline of new energy subsidies has brought great difficulties and uncertainties to the development of wind power and photovoltaic industries. The reduction of new energy subsidies has brought more significant problems and tension to the development of wind power and photovoltaic industries.

The distribution of renewable energy such as hydro energy, wind energy, and solar energy is highly concentrated in China and the resource-rich areas are in reverse distribution with the load centers; 60% of China’s hydro energy resources are concentrated in the southwest, and the areas with better development conditions such as wind power and photovoltaic power are concentrated in the West and North. However, the eastern coastal areas, where the power load accounts for more than 2/3 of the total load in China, are economically developed, but energy resources are relatively scarce. It is difficult to flexibly dispatch thermal power generation [37]. There is a lack of gas turbine power station with fast-tracking load adjustment and pumped storage power station (PSPS) with flexible peak regulation and frequency modulation in resource-rich areas. The overall accommodation conditions are insufficient, which restricts the utilization of renewable energy.

More
© Text is available under the terms and conditions of the Creative Commons Attribution (CC BY) license; additional terms may apply. By using this site, you agree to the Terms and Conditions and Privacy Policy.
Upload a video for this entry
Information
Subjects: Others
Contributor MDPI registered users' name will be linked to their SciProfiles pages. To register with us, please refer to https://encyclopedia.pub/register :
Wang Keke
View Times: 149
Revisions: 2 times (View History)
Update Time: 05 Feb 2021
Table of Contents
1000/1000
Hot Most Recent