Submitted Successfully!
Thank you for your contribution! You can also upload a video entry related to this topic through the link below:
https://encyclopedia.pub/user/video_add?id=6938
Check Note
2000/2000
Oral Glucose Tolerance Test
Edit
Upload a video
This entry is adapted from 10.3390/jcm9113451

The oral glucose tolerance test (OGTT) has been the mainstay for diagnosing gestational diabetes for decades. However, this test is cumbersome, deeply flawed, and has reduced reproducibility. In this review, we explore a history of the OGTT, its reproducibility, and the many factors that can impact its results with an emphasis on pregnancy.

Globally, gestational diabetes (GDM) is increasing at an alarming rate. This increase is linked to the rise in obesity rates among women of reproductive age. GDM poses a major global health problem due to the related micro-and macro-vascular complications of subsequent Type 2 diabetes and the impact on the future health of generations through the long-term impact of GDM on both mothers and their infants. Therefore, correctly identifying subjects as having GDM is of utmost importance. The oral glucose tolerance test (OGTT) has been the mainstay for diagnosing gestational diabetes for decades. However, this test is deeply flawed. In this review, we explore a history of the OGTT, its reproducibility, and the many factors that can impact its results with an emphasis on pregnancy.

The OGTT has been used in clinical medicine for over 100 years and was first described by Conn. His findings were based on the work of Jacobsen in 1913, who demonstrated that carbohydrate ingestion leads to glucose fluctuations [1]. Since then, the OGTT has been contested [2]. The main concerns raised by Unger in 1957 were the diagnostic values at each time point, the timing of samples, diet (at that time 300 g of carbohydrates for 3 consecutive days prior to the test was recommended), exercise, age, gastrointestinal factors (e.g., gastric emptying time or gastrointestinal absorption rates) and stress prior to the test that may influence the values of the test. In 1964, Nadon et al. [3] completed a comparative analysis between OGTT and the intravenous glucose tolerance test (IVGTT) and found considerable disagreement between both in the identification of diabetes. They concluded that, in the future, diabetes “may be diagnosed without reliance on glucose tolerance tests alone” [3].

In 1965, McDonald et al. examined the reproducibility of the OGTT [4]. In this work, 400 male volunteers free of diabetes underwent a series of six separate OGTTs and demonstrated that blood glucose levels for individuals varied considerably. A decade later, these findings were corroborated by Olefsky et al. [5].

In 1991, Harlass et al. [6] found OGTT reproducibility of only 78% in women with an elevated glucose concentration 1h post a glucose load when repeated within 2 weeks. Catalano [7] reported poor reproducibility for the OGTT in diagnosing GDM in 24% (9 of 38) of pregnant women tested. The authors hypothesised that this was likely due to a norepinephrine-mediated process where maternal stress leads to increased concentrations of glucose and insulin. This theory was supported by Ko et al. [8], who found the overall reproducibility of the OGTT to be 65.5% with subjects showing an improvement in glycaemic status on repeat testing. More recently, Munang et al. [9] showed the reproducibility of the OGTT for GDM in a sub-Saharan African population to be 74.2%. In this study, 70 women underwent the OGTT at 24–28 weeks of gestation and again one week later. However, the generalisability of the results of this study to other populations is questionable due to the small cohort, the short time interval between repeat testing and the fact that glucose was measured on capillary blood samples and not plasma as is more usual.

Despite scientists raising concerns about the reproducibility of the OGTT for over 50 years, it remains the only available test and the current “gold standard” for diagnosing Type 2 Diabetes Mellitus (T2DM) and GDM. In this review, the myriad of variables that affect the reproducibility and accuracy of the OGTT are discussed in terms of the Total Testing Process: pre-analytical, analytical and post-analytical phases (Figure 1). 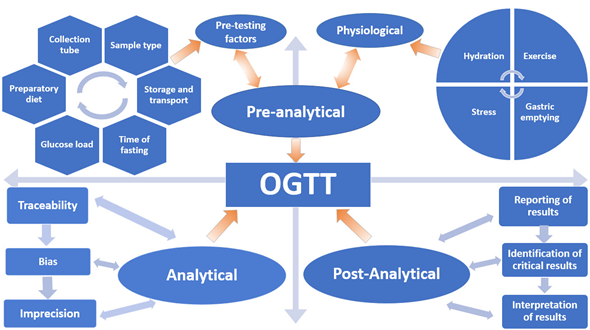 Diagnosing GDM is important not only for the short-term adverse outcomes related to pregnancy and delivery but also for the long-term consequences affecting both the mother and the child such as the development of T2DM, obesity, metabolic, cardiovascular, neurological, and psychiatric problems [10]. The main purpose of GDM screening is the identification of GDM cases, thus facilitating early lifestyle interventions and treatment. Randomized clinical trials (RCTs) have shown that treatment of GDM through lifestyle changes and pharmacological interventions leads to a reduction in adverse perinatal outcomes (large/small for gestational age, macrosomia, prematurity, neonatal hypoglycaemia and caesarean section delivery) [11][12].

Debate continues on the optimum screening strategy to diagnose GDM [13]. Universal screening is an approach where all pregnant women are screened. Critics of this approach highlight the fact that, if adopted, universal screening would mean that many women without GDM would be subjected to unnecessary invasive testing and that the cost implications for healthcare systems would be significant [14]. The alternative approach is selective screening based on the presence of risk factors. Selective screening is less costly as fewer women are tested. However, unscreened women may develop GDM and remain undiagnosed with the potential for increased adverse outcomes. Risk factors for GDM include age ≥30 years, family history of diabetes, increased body mass index (BMI), previous GDM, miscarriage, polycystic ovarian syndrome (PCOS) and a previous large for gestational age (LGA) or macrosomic baby [15]. The Atlantic Diabetes in Pregnancy (Atlantic DIP) study group evaluated the difference in GDM prevalence using three distinct guidelines for selective screening in a cohort of universally screened pregnant women [16]. This research found that by using the 2008 National Institute for Health and Care Excellence (NICE) [17], 2010 Irish [18] and 2013 American Diabetes Association (ADA) guidelines [19], 20%, 16%, and 5% of women, respectively, would have been misdiagnosed as not having GDM. In an Italian study, Pintaudi et al. [20] found that when universal screening was applied, 11.1% of pregnant women were identified as having GDM, but when selective screening was applied to the same cohort, 23% of GDM cases would have been missed.

In an effort to provide universal screening such that no case of pregnancy dysglycaemia is missed, researchers are intensifying the quest to identify an alternative biomarker/test that would easily, accurately, reproducibly and economically detect this at-risk maternal population. Identifying a minimally invasive biomarker that could be used as a single test in the non-fasting state would have clear advantages over the current fasting OGTT.

The OGTT is subject to several factors spanning the total testing process that have the potential to influence its results and negatively impact patient care. Clear guidance is needed to ensure a universal standardized approach to performing and interpreting the OGTT for diagnosing GDM in a manner akin to that for the non-pregnant individual. This will permit global harmonization of the detection of GDM, improve the accuracy and reproducibility of the OGTT and provide for better outcomes for mothers and their offspring. If this cannot be achieved perhaps it is time for a change. The search for better biomarkers to diagnose diabetes is rapidly expanding with a number of biomarkers as predictors of GDM currently under evaluation

More
© Text is available under the terms and conditions of the Creative Commons Attribution (CC BY) license; additional terms may apply. By using this site, you agree to the Terms and Conditions and Privacy Policy.
Upload a video for this entry
Information
Subjects: Others
Contributor MDPI registered users' name will be linked to their SciProfiles pages. To register with us, please refer to https://encyclopedia.pub/register :
Delia Bogdanet
View Times: 173
Revisions: 2 times (View History)
Update Time: 02 Feb 2021
Table of Contents
1000/1000
Hot Most Recent