Submitted Successfully!
Thank you for your contribution! You can also upload a video entry related to this topic through the link below:
https://encyclopedia.pub/user/video_add?id=6873
Check Note
2000/2000
Avian Influenza A Virus
Edit
Upload a video
This entry is adapted from 10.3390/v12091046

Avian influenza A virus (AIV) infections with H5N1- and H9N2-strains and co-infections with both subtypes have been frequently reported in field samples from poultry, but genetic reassortment between both subtypes has not been reported yet. Therefore, we evaluated the genetic compatibility and the replication efficiency of H5N1 reassortants of recently circulating H5N1 and H9N2 in Egypt (H5N1-EGY and H9N2-EGY). We show that the replication efficiencies of H5N1-EGY reassortants expressing PB2 and PA polymerase subunits of H9N2-EGY, H5N1PB2-H9N2EGY and H5N1PA-H9N2EGY, were higher than the wildtype H5N1-EGY in mammalian cells, but comparable to the positive H5N1 control comprising the 6 human-adapted/H9N2 derived internal proteins-encoding segments of human H7N9 (H5N1-6H7N9Anhui), at 37°C. By propagating both H5N1 reassortants on mammalian cell cultures at 33°C and 39°C, both viruses replicated to higher levels than the parental H5N1-EGY, but comparable to the control H5N1-6H7N9Anhui, at both temperatures. This may confirm that the emergence of H5N1 reassortants with internal proteins-encoding segments from cocirculating H9N2 viruses is possible in principle and may be potentiated by improved replication fitness of these reassortants. The eventual spread of these reassortants would negatively augment the zoonotic potential of H5N1 viruses in nature.

Highly pathogenic avian influenza A viruses (HPAIVs) of the H5N1 subtype have crossed the animal/human barrier in 1997 causing lethal zoonotic infections in humans [1][1]. During the second wave of human HPAIV H5N1 infections—specifically in December 2005, HPAIV H5N1 (clade 2.2.1) have been reported in Egypt in migratory birds [2]. Subsequently in mid-February 2006, HPAIV H5N1 were transmitted to farmed and backyard poultry in Egypt [3][4] where they kept circulating. They were therefore officially declared “endemic” in the Egyptian poultry sector since 2008 [5]. In parallel, human infections with HPAIV H5N1 are annually reported since 2006, classifying Egypt as the country with the highest cumulative number of human cases in the world [1].

Concomitantly, low pathogenic avian influenza A virus (LPAIV) of the H9N2 subtype are circulating extensively worldwide in poultry for several decades, resulting in a high genetic diversity [1][6]. In 2010, LPAIV H9N2 of a G1-like lineage were detected in different avian species in Egypt [7][8][9]. Currently, the virus appears to be endemic in Egyptian poultry [6]. Since 2011, these viruses crossed the species barrier to humans due to their mammalian-like characteristics, causing mild to moderate human infections in different countries of the Middle East including Egypt [1][6]. The global concern about these H9N2 viruses is mainly associated with their ability to donate their genes to other avian influenza viruses (AIV) giving rise to high and low pathogenic AIVs that might thereby achieve the capability to efficiently cross the specie barrier and infect humans such as the LPAIV H7N9, reported in China since 2013 [1][10].

As both LPAIV H9N2 and HPAIV H5N1 subtypes are co-circulating in birds in several regions of the world co-infections with both subtypes have been frequently reported in individual avian hosts [11]. Consequently, this scenario increases the probability of genetic reassortment between both strains and could result in reassortants with enhanced zoonotic potential [10]. The limited detection of such reassortants in nature is probably due to insufficient surveillance, genetic incompatibility of possible H5N1/H9N2 segment combinations/constellations and/or negative selective pressure against such H5N1/H9N2 reassortants with new genetic constellations that render the virus replication incompetent, compared to the parental strains.

In an attempt to better estimate the outcome of human infections with reassortants between H5N1EGY and H9N2EGY, we set out to examine the influence of site-specific mammalian body temperatures on viral replication efficiency. Therefore, we investigated whether different temperatures resembling either the initial site of IAV replication in the upper respiratory tract (33 °C) or the later replication site of the lower respiratory tract (39 °C) in case of viral pneumonia [12], would affect the replication efficiency of the H5N1PB2-H9N2EGY and H5N1PA-H9N2EGY versus wild-type H5N1EGY and the control H5N16H7N9Anhui. To this point, mammalian cell lines Calu-3 as an in vitro model for bronchial epithelial cells of the upper respiratory tract (URT) [13] and A549 as a type-II alveolar epithelial cell model of the lower respiratory tract (LRT) [14] were infected in triplicates with the indicated viruses at low MOI of 0.001.

The obtained results (Figure 1) demonstrated that in Calu-3 cells both reassortants H5N1PB2-H9N2EGY and H5N1PA-H9N2EGY replicate to higher levels than the parental H5N1EGY, but comparable to the control H5N16H7N9Anhui at both temperature settings. In A549 cells, the H5N1PB2-H9N2EGY replicated significantly higher than the wild-type H5N1EGY, but comparable to control H5N16H7N9Anhui at 33 °C and 39 °C. However, the replication of H5N1PA-H9N2EGY in A549 cells was only higher than the wild-type H5N1EGY at 39 °C. These data demonstrate the ability of both reassortant viruses to replicate efficiently at different temperature conditions, mimicking the temperatures of the different lung compartments during AIV invasion at the initial site of infection and subsequently during alveolar infection. 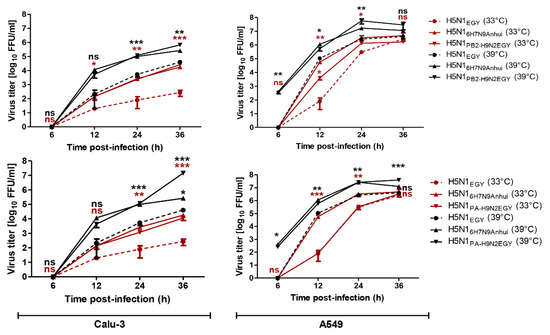 Figure 2. Pathogenicity of H5N1EGY and reassortants H5N1PB2-H9N2EGY and H5N1PA-H9N2EGY in female BALB/c mice. Mice were infected with 105 PFU of each virus in 100 μL phosphate-buffered saline (PBS). The morbidity rate and the mortality rate as demonstrated by weight loss of body (a) and the survival rate (b), respectively, were monitored for 14 dpi. Mice judged moribund (body weight loss >25%) were euthanized.

These data suggest that the reduced pathogenicity of the reassortant H5N1PB2-H9N2EGY and H5N1PA-H9N2EGY viruses may be attributed to specific genetic difference between the PA and PB2 segments of H9N2EGY and H5N1EGY.

More
© Text is available under the terms and conditions of the Creative Commons Attribution (CC BY) license; additional terms may apply. By using this site, you agree to the Terms and Conditions and Privacy Policy.
Upload a video for this entry
Information
Subjects: Virology
Contributor MDPI registered users' name will be linked to their SciProfiles pages. To register with us, please refer to https://encyclopedia.pub/register :
Stephan Pleschka
View Times: 136
Revisions: 2 times (View History)
Update Time: 29 Jan 2021
Table of Contents
1000/1000
Hot Most Recent