Submitted Successfully!
Thank you for your contribution! You can also upload a video entry related to this topic through the link below:
https://encyclopedia.pub/user/video_add?id=684
Check Note
2000/2000
Resveratrol and Cancer Evidence
Edit
Upload a video
This entry is adapted from 10.3390/ijms21082945

Resveratrol (3,5,4′-trihydroxystilbene) is a natural phytoalexin that accumulates in several vegetables and fruits like nuts, grapes, apples, red fruits, black olives, capers, red rice as well as red wines. Being both an extremely reactive molecule and capable to interact with cytoplasmatic and nuclear proteins in human cells, resveratrol was studied in these years as complementary and alternative medicine (CAM) for the therapy of cancer, metabolic and cardiovascular diseases like myocardial ischemia, myocarditis, cardiac hypertrophy, heart failure. This review will describe the main biological targets, cardiovascular outcomes, physico-chemical and pharmacokinetic properties of resveratrol in preclinical and clinical models implementing its potential use in cancer patients.

With almost 10 million deaths per year worldwide, cancer is a major public health problem, and it has become the second leading cause of death in Western countries [1]. Surgery, antiblastic chemotherapy (CT), target therapy (TT), immunotherapy and radiotherapy (RT) are the most common treatments for cancer. Antiblastic CT, TT, immunotherapy and RT are used as primary treatment approaches in most cancer patients and play vital roles in cancer treatment because many patients are diagnosed at advanced stages, compromising the option of surgery treatment [2]. However, more tumors have become resistant to CT, TT, immunotherapy and RT, which has become a major problem in cancer therapy. Furthermore, complications emerge when cancer cells develop chemoresistance and radioresistance via multiple mechanisms, and the CT agents and RT often cause adverse events [3]. Therefore, we need to identify a new strategy or new therapeutic agent that can overcome chemoresistance and radioresistance. A large number of natural products are considered to be effective anticancer drugs [4]. Most of them are found in fruit and vegetables, such as polyphenols and resveratrol [5]. These compounds have multiple effects in several chronic disease treatments, including cancer [4][5]. Resveratrol has been shown to regulate cellular growth in many human cancer cell lines [6]. Especially, its role in inducing growth inhibition, cell cycle arrest and apoptosis suggested the possibility to use resveratrol to prevent cancer (Figure 1) [7][8] A number of studies highlighted that this cell-growth modulating effect is both dose- and time-dependent [9][10]. However, the exact mechanism of these actions is not fully understood [4][10]. A high concentration of radical oxygen species (ROS) is found in cancer cells. ROS are a cornerstone in cancer onset and progression through the promotion of cell growth, immortalization and aberrant inhibition of locomotion and proliferation [11]. Resveratrol carries out its antioxidant properties through several mechanisms [11][12]. Especially, resveratrol modulates antioxidant enzymes such as superoxide dismutase, catalase and glutathione peroxidase [12]. Therefore, it induces cancer cell apoptosis by accumulation of hydrogen peroxide [12]. Resveratrol can also downregulate hypoxia-inducible factor-1α (HIF-1α) accumulation, leading to the suppression of fluorodeoxyglucose (F-FDG) uptake from metabolically active cells and glycolysis [13][14].

The tumor microenvironment (TME) is defined as the totality of normal cells, molecules and blood vessels surrounding and feeding each cancer cell [15]. TME cells are stromal cells, immune-inflammatory cells and vascular endothelial cells. Their interactions with each other and with the cancer cells through the secretion of cytokines and chemokines play a fundamental role in tumor initiation and progression [15]. As a matter of fact, a healthy TME protects against tumorigenesis [16]. On the contrary, disorders of the TME increase the levels of inflammatory cytokines, such as tumor necrosis factor α (TNF-α), promoting tumorigenesis through cell immortalization [16]. Moreover, TME governs chemo- and radio-resistance [17]. Therefore, targeting TME to defy cancer could be a winning strategy, both because of its involvement in tumorigenesis and the fact that it is less prone to mutate and rapidly cause metastatic events [17]. Cancer is characterized by a chronic inflammatory state, derived from the activation of both the immune and adaptive immune system cells present within the TME [15]. Thanks to its action on antioxidant enzymes and HIF-1α, among other effects, resveratrol has been proposed as a possible agent able to downregulate chronic inflammation in TME (Figure 2) [18]. In fact, resveratrol downregulates the production of inflammatory cytokines and increases the release of anti-inflammatory mediators by inhibiting AP-1 and NF-κB [19]. TME is a hypoxic environment, created by a rapid cancer cell growth and dysregulation of angiogenesis [18]. HIF-1α, a transcription factor regulating the expression of more than a hundred genes, is overly expressed during hypoxia, promoting more aggressive behaviors of the cancer such as chemo-resistance and metastatic spread [13][18]. As previously mentioned, resveratrol is able to modulate the expression of HIF-1α, thus reducing the fitness of TME to the expansion of the tumor [[18]. Modulation of HIF-1α leads to another important effect of resveratrol as an anti-tumor agent. Through downregulation of HIF-1α and increased expression of thrombospondin-1, resveratrol acts as an anti-angiogenic drug [18]. Resveratrol was also demonstrated to be able to interfere with the activation of some immune cells through the inhibition of the proliferation of both T and B lymphocytes and the downregulation of the expression of cluster of differentiation CD28 and CD80 on T-lymphocytes and macrophages, respectively [20]. A particular subset of macrophages, named tumor-associated macrophages (TAMs), are activated by cancer cells and promote the production of inflammatory cytokines through a STAT3 pathway. Resveratrol is able to decrease STAT3 activation in cancer [21]. In addition, resveratrol modulates the PI3K pathway in cancer cells, which downregulates CD8+ cytotoxic T cell activity. Therefore, by inhibiting PI3K, resveratrol enhances anti-cancer immunity [22]. 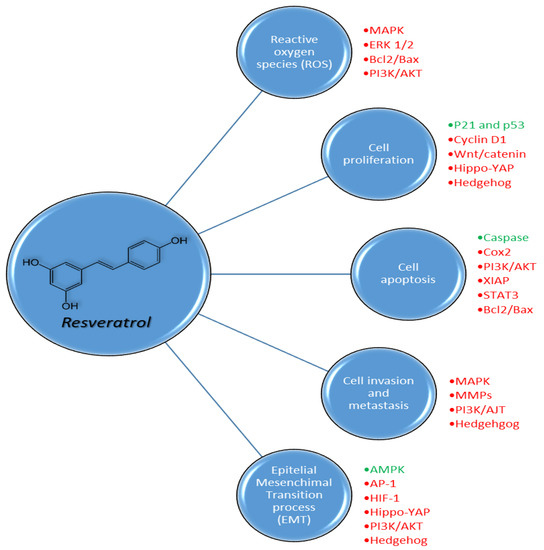 Figure 2. Multiple effects of resveratrol on the tumor microenvironment through the inhibition of many pro-inflammatory mediators and cytokines involved in cancer cell survival, in cancer-associated fibroblast activation and modulation of immune cells resident in tumor tissue.

More
© Text is available under the terms and conditions of the Creative Commons Attribution (CC BY) license; additional terms may apply. By using this site, you agree to the Terms and Conditions and Privacy Policy.
Upload a video for this entry
Information
Subjects: Others
Contributor MDPI registered users' name will be linked to their SciProfiles pages. To register with us, please refer to https://encyclopedia.pub/register :
Alessia Bignucolo
View Times: 282
Revisions: 3 times (View History)
Update Time: 29 Oct 2020
Table of Contents
1000/1000
Hot Most Recent