Submitted Successfully!
Thank you for your contribution! You can also upload a video entry related to this topic through the link below:
https://encyclopedia.pub/user/video_add?id=6651
Check Note
2000/2000
Adenocarcinoma of the Colon
Edit
Upload a video
This entry is adapted from 10.3390/gels7010006

Adenocarcinoma of the colon is the most common malignant neoplasia of the gastrointestinal tract and is a major contributor to mortality worldwide. Invasiveness and metastatic behavior are typical of malignant tumors and, because of its portal drainage, the liver is the closest capillary bed available in this case, hence the common site of metastatic dissemination. Current therapies forecast total resection of primary tumor when possible and partial liver resection at advanced stages, along with systemic intravenous therapies consisting of chemotherapeutic agents such as 5-fluorouracil. These cures are definitely not exempt from drawbacks and heavy side effects. Biocompatible polymeric networks, both in colloids and bulk forms, able to absorb large quantities of water and load a variety of molecules-belong to the class of innovative drug delivery systems, thus suitable for the purpose and tunable on each patient can represent a promising alternative. Indeed, the implantation of polymeric scaffolds easy to synthesize can substitute chemotherapy and combination therapies scheduling, shortening side effects. Moreover, they do not require a surgical removal thanks to spontaneous degradation and guarantees an extended and regional cargo release, maintaining high drug concentrations.

Adenocarcinoma of the colon is the most common malignancy of the gastrointestinal tract (GIT) and is a major contributor to mortality worldwide, while the small intestine is an uncommon site for malignant tumors even though it accounts for 75% of the overall GIT length. With 50,000 deaths/y in the US [1] and 20,000 deaths/y in Italy, colorectal adenocarcinoma is second for cancer death. Its incidence peaks at 60–70 years of age, affects males slightly more than females and is geographically dependent on dietary factors.

Its pathogenesis includes genetic and epigenetic abnormalities; indeed, colorectal cancer (CRC) often grows as polypoid masses (in the cecum and ascending colon) or as annular lesions that cause obstruction (in distal colon). The general microscopic characteristics of right- and left-sided colonic adenocarcinomas are similar, and the tumor is usually equally distributed over the entire length of the colon [2]. CRC is detectable by endoscopic screening, preceded by iron-deficiency anemia in older males and postmenopausal females detected by CBC (complete blood count). The main symptoms are occult bleeding, changes in bowel habits and cramping discomforts [1].

Total resection of the tumor is the optimal treatment when a malignant lesion is detected in the large bowel. Before and after surgery, a colonoscopy of the entire large bowel should be performed together with a CT scan and evaluation of the presence of metastatic disease through biochemical assessment of liver functions. Following recovery from a complete resection, patients should be observed carefully for five years by physical examinations and blood tests. Indeed, patients cured of CRC have a 3–5% probability of developing additional bowel cancer during their lifetime and a >15% risk of the development of further polyps.

Radiation therapy, performed either pre- or postoperatively, reduces pelvic recurrence but does not appear to prolong survival. Therefore, it is not effective as a primary treatment of colon cancer. Systemic therapy becomes more effective: 5-fluorouracil (5-FU or 5-fluoro-2,4-pyrimidinedione) administration remains the backbone treatment for this disease. The efficacy is enhanced for patients with liver metastases when chemotherapy is infused directly into the hepatic artery or portal vein, but this treatment results in toxic, costly and does not lead to appreciably survival prolongation. 5-FU administration with some adjuvants (folinic acid, irinotecan, leucovorin, oxaliplatin, paclitaxel, piroxicam) improves response rates and survival of patients with metastatic diseases; it can be administered intravenously or orally with similar efficacy (administration from the rectum is not effective in distributing the precise drug dose to the entire area of the colon [3]), producing average survival of two years. Monoclonal antibody treatments are also effective in patients with advanced CRC: avastin (cetuximab, bevacizumab or panitumumab [4]) can act as an anti-angiogenesis agent with hypertension, proteinuria and thromboembolic events as possible side effects [1].

Patients with solitary hepatic metastases without clinical or radiographic evidence of additional tumor involvement should be considered for partial liver resection; this procedure is associated with 5-year survival rates of 25–30% of patients [1].

The most suggested therapy is a combination of systemic intravenous administration of chemotherapeutic agents, the correct choice for a patient is made by biomarker analysis, but it is further complicated by the fact that current treatment guidelines for metastatic CRC differ around the world [4]. Over the past decades, advances in surgical management and identification of novel therapeutic targets have led to significantly improved survival of patients with colorectal liver and lung metastases [5]. CRC metastasis dissemination to the liver is one of the most life-threatening malignancies in humans and represents the leading cause of CRC-related mortality. In fact, only 15% or fewer of patients with colorectal adenocarcinoma at the stage of distant metastases to the liver are alive after five years from diagnosis. Due to the portal drainage, the liver is the most common site of metastatic lesions.

2. Biomaterials for the Treatment of CRC and Liver Metastases

Block copolymers consisted of poly(ethylene glycol) (PEG) and biodegradable polyesters, such as poly(lactic acid) (PLA), have been developed to obtain biodegradable and biocompatible thermogelling hydrogel for drug delivery [6]. The most used composition is PLA–PEG–PLA triblock copolymer, but lactide has three stereoisomeric forms, D-lactide (PDLA), L-lactide (PLLA) and meso or D,L-lactide, depending on the orientation of methyl groups; the principal shapes used are PDLLA–PEG–PDLLA (PLEL) or PEG–PDLLA, obtained with a stereocomplexation of the two enantiomers.

Figure 3. In vivo immune regulation mediated by the hydrogel vaccine. Reprinted with permission from Elsevier [7].

Another biodegradable and biocompatible block copolymer made of PEG and polyesters, poly(ε-caprolactone) (PCL), is presented here. Often this confirmation is seen as a better variation of Pluronic©: using PCL instead of polypropylene glycol (PPG) can solve the weak hydrophobicity of the latter, resulting in a distinct decrease in molecular weight after degradation and easier elimination from the body, owing to an evident decrease in CMC [8]. PCL is a biodegradable, non-toxic and FDA-approved polymer with great permeability. Its monomer is ε-caprolactone, a cyclic ester possessing a seven-membered ring. The copolymers PEG/PCL-based implied in drug delivery technologies have different blocks’ organization: from the basic PEG–PCL diblock copolymer (PECL) [9] to the variants of the triblock copolymer, that is PEG–PCL–PEG (PECE) [10] or PCL–PEG–PCL (PCEC).

Moving to the world of natural polymers, chitin is an amino-polysaccharide of major importance, second to cellulose for quantity produced worldwide. It is a poly(β-(1–4)-N-acetyl-D-glucosamine), namely a modified polysaccharide whose units form covalent β-(1–4)-linkages between N-acetyl-D-glucosamine monomers. Therefore, chitin may be described as cellulose with one hydroxyl group on each monomer replaced with an acetyl amine group. This biopolymer is synthesized by an enormous number of living organisms and occurs in nature as ordered microfibrils forming structural components in the exoskeleton of arthropods or in the cell walls of fungi and yeast. Many other living organisms in the low plant and animal kingdoms produce chitin, which serves functions where reinforcement and strength are required. For industrial processing, chitin is extracted from crustaceans, mainly crab and shrimp shells, but it must be treated and graded in terms of purity and color since residual proteins, pigments and impurities cause a problem for further utilization, especially for biomedical applications. Depending on its source, chitin occurs as two allomorphs: α and β forms, which differ in the packing and polarities of adjacent chains and successive sheets. The former is the one with the most interesting properties, and it could be reproduced (with efforts) in the laboratory [11]. The principal drawback of chitin is its insolubility in water and in common organic solvents, which makes its processing difficult. Hence the N-deacetylated derivative was developed: chitosan. It is straightforward that the higher the degree of deacetylation, the higher its solubility: chitin with 40% deacetylation can be sufficiently dissolved in water, but above 50%, the name is changed in chitosan. The hydrophobicity of chitin arises from its extensive hydrogen bonding between the constituent groups that result in its rigid crystalline structure. The deacetylation also leads to the destruction of the secondary structure of chitin, making it amorphous and useful for some applications [12]. Figure 4. Schematic hypothetical mechanism of doxorubicin (DOX) delivery from chitin nanogels within the cell. Reprinted with permission from Elsevier [13].

Hyaluronic acid (HA) is another natural polymer widely used in the biomedical field. It is an anionic linear biopolymer composed of alternating disaccharide units of D-glucuronic acid and N-acetyl-D-glucosamine with β(1–4) interglycosidic linkages [14]. More than 50% of HA in the human body is present in the skin, lung and intestine, while minor quantities appear in the umbilical cord and blood. Currently, HA is commercially produced from animal tissues such as cockscomb and from microbial fermentation, therefore—like chitin and chitosan—it is not so renewable, but this explains its biocompatibility. HA functions are associated with the regulation of cell behaviors since a strong correlation between its presence, and cell migration and proliferation has been demonstrated: HA plays pivotal roles in wound healing, cell motility, angiogenesis and ECM construction. The tasks of this important polymer depend on its molecular weight: high MW HA maintains cell integrity and water content in ECM, while degraded fragments are known to induce receptor-mediated intracellular signaling [15]. HA follows the usual route of degradation and excretion: it is taken up in tissues and degraded by lymphatic systems, then the degraded HA enters the blood and is transported to the liver where it is catabolized. 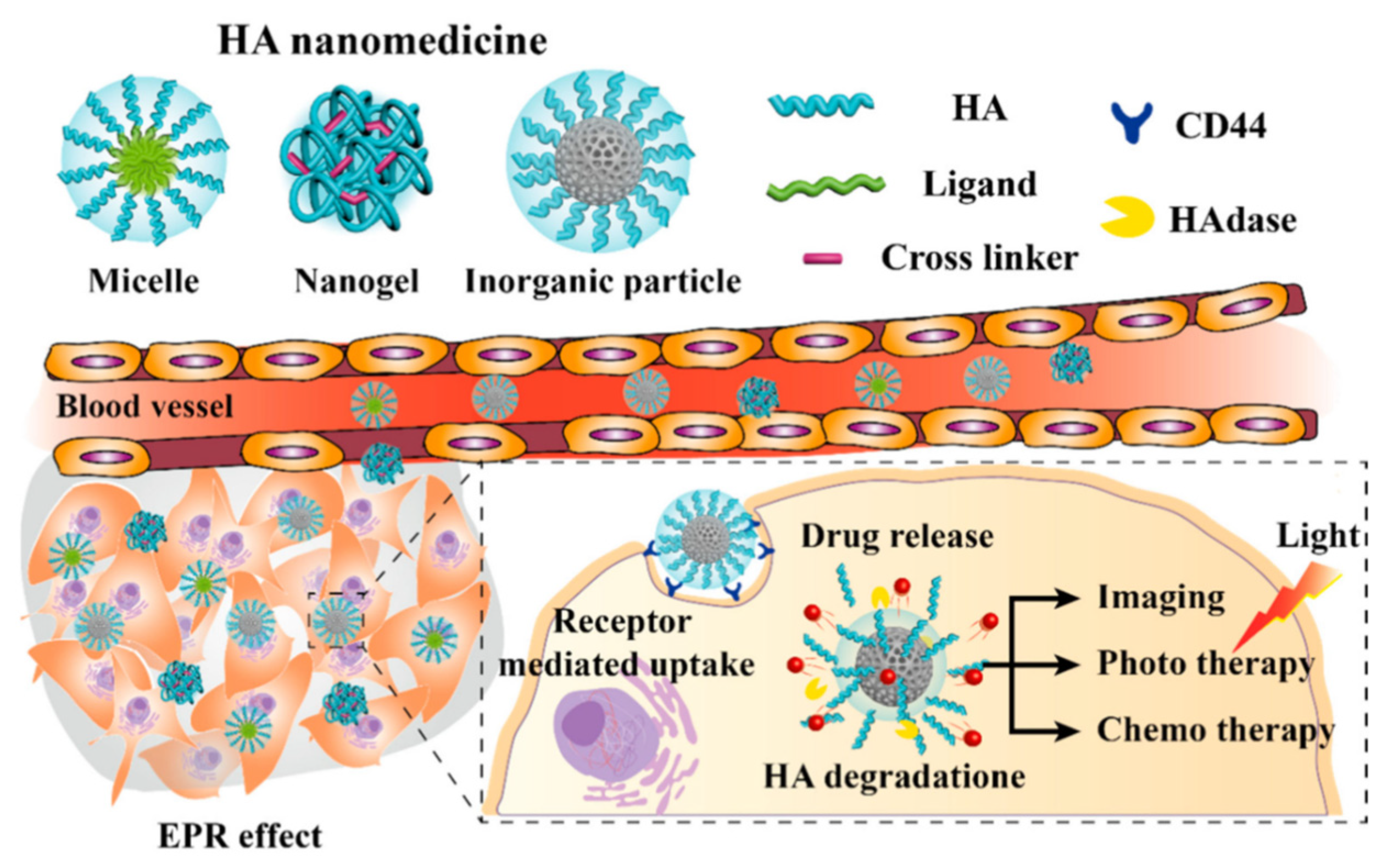 More
© Text is available under the terms and conditions of the Creative Commons Attribution (CC BY) license; additional terms may apply. By using this site, you agree to the Terms and Conditions and Privacy Policy.
Upload a video for this entry
Information
Subjects: Oncology
Contributor MDPI registered users' name will be linked to their SciProfiles pages. To register with us, please refer to https://encyclopedia.pub/register :
Filippo Rossi
View Times: 116
Revisions: 2 times (View History)
Update Time: 22 Jan 2021
Table of Contents
1000/1000
Hot Most Recent