Submitted Successfully!
Thank you for your contribution! You can also upload a video entry related to this topic through the link below:
https://encyclopedia.pub/user/video_add?id=6588
Check Note
2000/2000
Meta-Wearable Antennas
Edit
Upload a video
This entry is adapted from 10.3390/ma14010149

Wireless Body Area Network (WBAN) has attracted more and more attention in many sectors of society. As a critical component in these systems, wearable antennas suffer from several serious challenges, e.g., electromagnetic coupling between the human body and the antennas, different physical deformations, and widely varying operating environments, and thus, advanced design methods and techniques are urgently needed to alleviate these limitations. Recent developments have focused on the application of metamaterials in wearable antennas, which is a prospective area and has unique advantages.

The emergence of the Internet has brought about tremendous changes in the communication of human. Wireless Body Area Network (WBAN) is one of the emerging technologies that is capable of enabling the communication between people and things. The development of body area network will result in a more context-aware and personalized communication in an intelligent wireless environment. WBAN is a network distributed around human, which is mainly used to detect and transmit physiological data of users, and cooperate with other networks to integrate the human into the overall network [1][2][3][4][5]. Through WBAN, communication and data synchronization can take place to complete the other communication networks, such as wireless sensor networks and mobile communication networks [1][2][6][7]. An important application of WBAN is in healthcare, where the body area network can transmit physiological information obtained from patients through various physiological sensors, such as blood pressure, blood sugar concentration, temperature, weight, and heartbeat [1][8][9][10] to the hospital’s medical monitoring equipment or the user’s personal mobile terminal [11]. In entertainment, a personal media device with high speed communication capability will enable augmented/virtual/mixed reality interaction with users, and wirelessly communicate with a device such as glasses [12] or headset [13]. In military applications, WBAN can provide personal location and mobile communications by a helmet [14][15] or a smart watch [16], etc. Figure 1 shows some typical applications of WBANs. 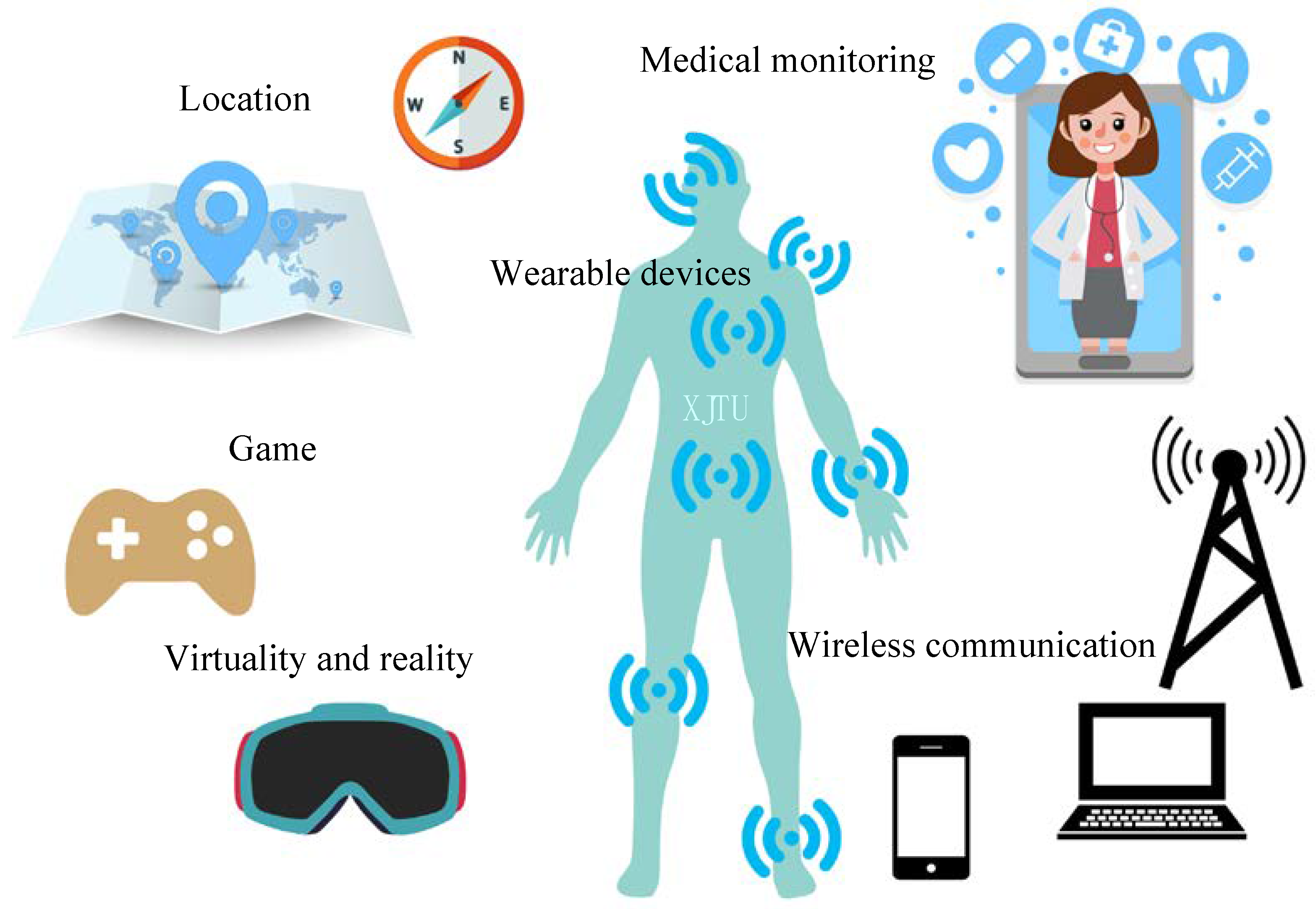 Wearable antennas, as a vital component in WBAN systems, enable wireless communication with other devices on or off human bodies [17][18][19][20][21][22][23][24][25][26][27][28][29][30][31][32][33][34][35][36][37][38][39][40][41][42][43]. Compared to traditional antennas, the design of wearable antennas are facing many development bottlenecks: The electromagnetic coupling between the human body and the antenna, the varying physical deformations, the widely varying operating environments, and limitations of the fabrication process [27][28][29][30][31][32][33]. Further, the requirements for these wearable antennas include mechanical robustness, low-profile, lightweight, user comfort, fabrication simplicity [17][18][19][20][21][22][23][24], wideband [25][26], and multiband [20][27][29]. Thus, advanced design methods and techniques are urgently needed to address these problems and demands of wearable antennas. In recent years, there has been much literature reporting the fabric material manufacturing and treatment: Embroidered fabric material, sewn textile materials, woven fabrics, materials that are not woven, knitted fabrics, spun fabrics, braiding, coated fabrics through/lamination, printed fabrics, and chemically treated fabrics [18][19]. Furthermore, novel forms of flexible devices such as a fully inkjet-printed antenna [30][31], a polydimethylsiloxane (PDMS)-based antenna [21][22], embroidery [32], and a silicone-based antenna [33], and devices combined with new design methods such as substrate-integrated waveguide (SIW) technology [34], miniature feeding network [23], magneto-electric dipole [35], characteristic mode theory [27][36][37], textile-type indium gallium zinc oxide (IGZO)-based transistors [30], and thin-film transistor technologies [24], are presented for special application scenarios. Furthermore, miniaturization methods, such as inductor/capacitor-loaded antennas [38][39][40], loop antennas [41], and planar inverted F antennas (PIFA) [42][43] are involved in WBAN devices design, which is helpful to improve the design flexibility of the wearable antennas.

Metamaterials are widely defined as an artificial periodic structure, in which the length of the unit cell p is much smaller than the guided wavelength λg, with unusual properties not available in nature in the electromagnetic field [44][45][46]. The use of metamaterials has been hugely successful in adapting conventional antenna designs into a wearable form, including composite right/left-handed transmission lines (CRLH TLs) based antennas [45][46][47][48][49][50][51][52][53][54], zero-order antennas [55][56], metamaterials-inspired antennas [32][57], artificial magnetic conductor (AMC) [58][59][60][61], electromagnetic band-Gap (EBG) [62][63][64][65], and High-Impedance Surface (HIS) [16]. Wearable antennas have been designed with properties such as multiple band operations [48][55], multiple functionalities [66][67][68][69], and gain enhancement [70][71] while maintaining a low profile and compact size [56][72][73] due to the development of the electromagnetic metamaterials tech. Besides the methods above, characteristic mode theory is also an excellent analysis approach to study the metamaterials-based antennas [74][75][76], and it improves the efficiency of antennas design in WBAN. Several initial attempts have shown that it is an effective method to design wearable antennas based on metamaterials.

The space limitation in wearable antennas and the need for these antennas to operate in multiple wireless standards is spurring the development of reconfigurable antennas. Yan et al. presented a pattern-reconfigurable wearable antenna based on a metamaterial structure, as shown in Figure 2 [77]. This wearable antenna consists of three CRLH TL unit cells, which are capable of switching between the zero-order resonance and +1 resonance in the patch using switchable stubs connected using vias. The two states of this antenna operate in the same frequencies but radiate differently, providing a monopole-like or a patch like radiation pattern as shown in Figure 3, and the performances detail are listed in Table 1.

Figure 2. Radiation pattern-reconfigurable wearable antenna based on metamaterial structure [77]. (a) The photo of the wearable antenna. (b) Two electrical field distributions at 2.45 GHz in z-direction. The first distribution is Patch mode (n = +1) and second one is monopole mode (n = 0). The arrows in the figures represent the direction of the equivalent magnetic current. 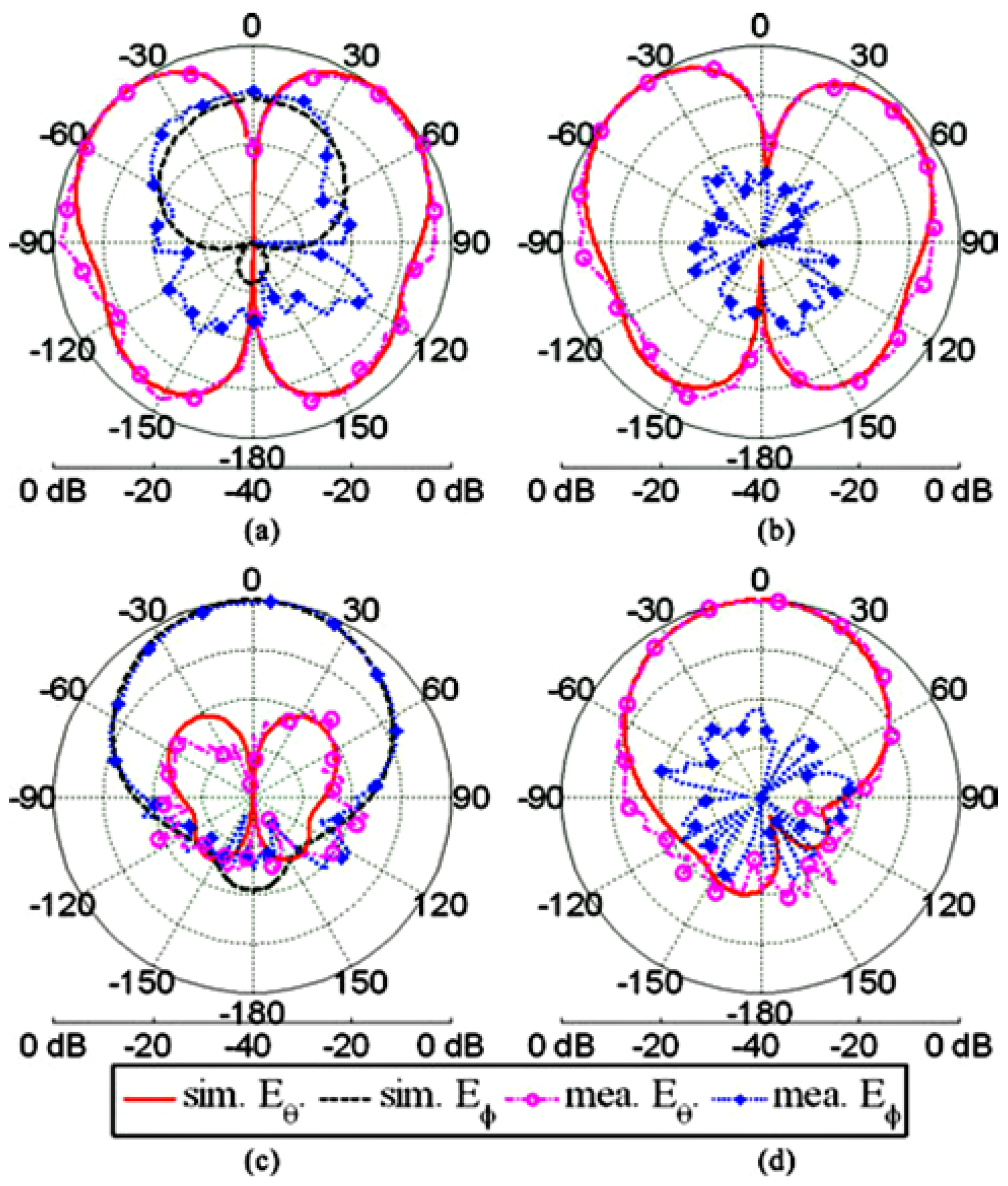 Table 1. Performances among the reconfigurable wearable antennas with metamaterials.

Besides that, Jang et al. proposed a method to fabricate a small semitransparent and stretchable antenna using a stretchable micromesh structure, as shown in Figure 4 [78]. This antenna consists of a 4.7 μm thick Cu mesh pattern and a PDMS layer as the substrate. The PDMS is flexible and optically transparent, and it can maintain the shape of a micromesh as well as protect the metal wire from mechanical damage when stretched. The increase in tensile strain reconfigures the resonant frequency of the antenna almost linearly from 2.46 to 2.94 GHz. However, this antenna suffers from low radiation efficiency due to the reduced surface currents flowing through the micromesh patch. 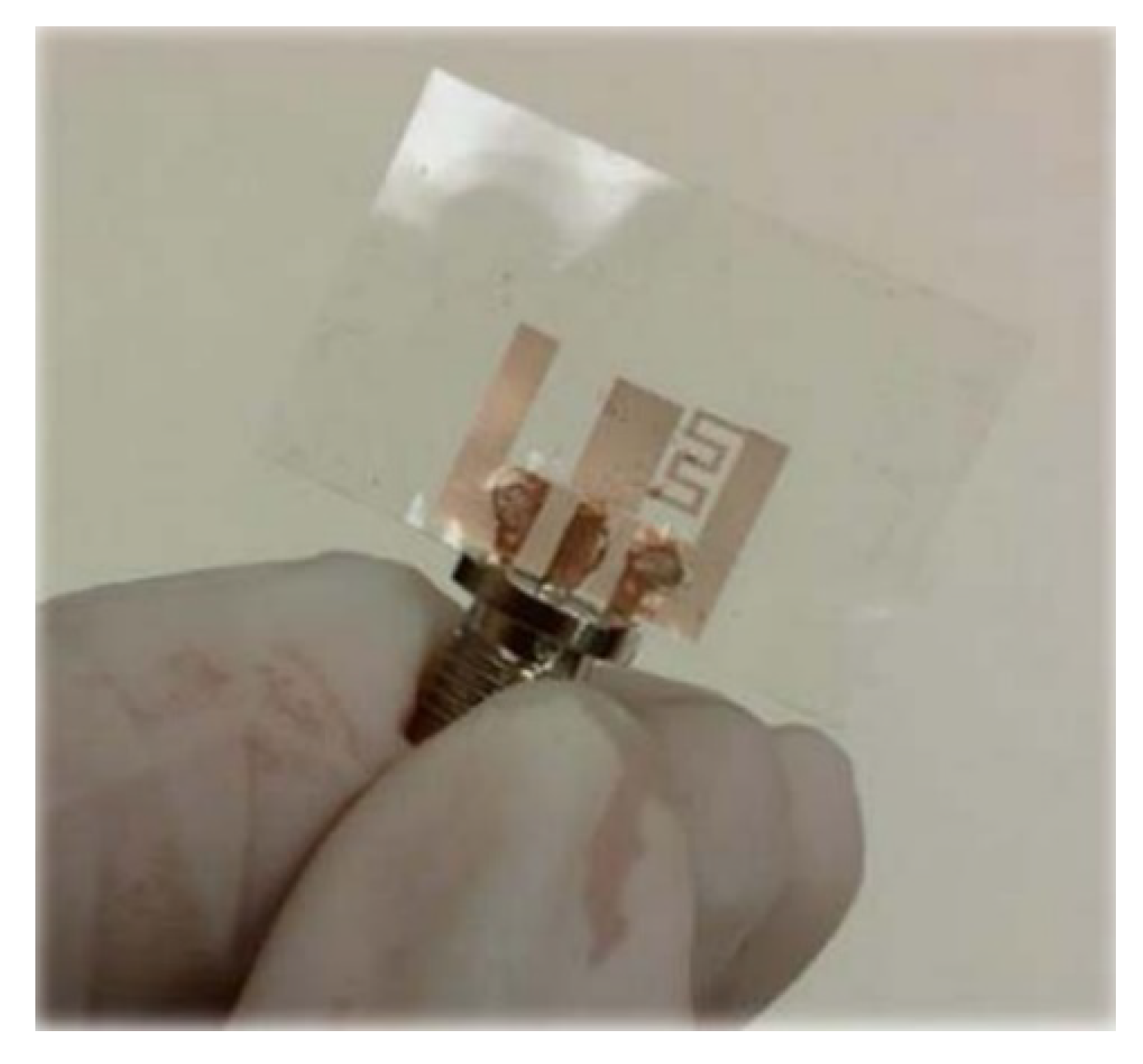 Figure 4. The photo of the mechanically reconfigurable electrically small antenna in [78]. The antenna made of flexible wire mesh and a frequency shift is generated in different stretch.

Next, a wearable reconfigurable antenna with AMC structure consisting of a folded slot and a stub was proposed in [79]. This antenna operates between a single and dual-band mode, with two orthogonal polarizations controlled by the ON/OFF states of the PIN diodes. When the PIN diode is in the ON state, the stub is symmetrical with respect to the CPW feed line and does not radiate. This results in a single operating frequency of the antenna. When the PIN switch is in the OFF state, the asymmetrical stub with respect to the feed line causes the current on the stub to be redirected, producing dipole-like radiation. Both the slot and the stub resonate with orthogonal polarizations.

The design of wearable antennas is rather different from the design of conventional antennas. The main challenge is to ensure that the designed wearable antenna still operates with minimal coupling to the human body and under different deformations. Nonetheless, several studies have proven that the integration of metasurfaces onto the antenna design based can significantly improve their performance. This review also highlighted the recent progress in the literature on metamaterial-based wearable antennas, including the classification of the main approaches in their integration. As for the wearable antennas based on CRLH TLs, there are electrically small antennas based on ZOR consisting of ENR, MNR, and DNR modes and dual-band patch antennas, and their electromagnetic property, single-negative, or double-negative material parameter, may exhibit exciting performances, which can be utilized flexibly for different WBAN applications. For the wearable antennas based on metasurface, two methodologies have been presented: One approach is that the zero reflection phase of the unit cell of AMC is design at the resonance frequency so that the feeding antenna can be placed on the AMC reflection plane, decreasing the profile of the wearable antenna Another one is derived from the principle of CRLH TLs that the reflector is as a radiator by exciting the metasurface, and the main merit of it is decrease the size of the wearable antenna dramatically. Finally, three reconfigurable wearable antennas were described briefly. In summary, the radiation properties of these antennas can be improved by using metamaterials as follows:

Nonetheless, with the various requirements of today’s wireless communication systems, it should be emphasized that there is not a single type of wearable antenna that is capable of meeting all of the requirements simultaneously. However, metamaterial-based wearable antennas have been demonstrated to be capable of significantly improve the performance of antennas when applied to the human body compared with traditional antennas. It is foreseeable that wearable antennas would endeavor towards miniaturization, multifunction, multi-band frequency, and broadband in the future, and metamaterials-based antennas, which have unique properties, provide a new approach for these goals. Thus, a deeper understanding of the operation of metamaterials will result in more applications of such structures in future WBAN antennas.

More
© Text is available under the terms and conditions of the Creative Commons Attribution (CC BY) license; additional terms may apply. By using this site, you agree to the Terms and Conditions and Privacy Policy.
Upload a video for this entry
Information
Subjects: Others
Contributor MDPI registered users' name will be linked to their SciProfiles pages. To register with us, please refer to https://encyclopedia.pub/register :
Sen YAN
View Times: 454
Revisions: 3 times (View History)
Update Time: 20 Jan 2021
Table of Contents
1000/1000
Hot Most Recent