Submitted Successfully!
Thank you for your contribution! You can also upload a video entry related to this topic through the link below:
https://encyclopedia.pub/user/video_add?id=6560
Check Note
2000/2000
Urogenital Schistosomiasis
Edit
Upload a video
This entry is adapted from 10.3390/jcm10020205

Schistosomiasis is the most important helminthiasis worldwide in terms of morbidity and mortality. Most of the infections occurs in Africa, which about two thirds are caused by Schistosoma haematobium. The infection with S. haematobium is considered carcinogenic leading to squamous cell carcinoma (SCC) and urothelial carcinoma of the urinary bladder.

Schistosomiasis or Bilharziosis is a neglected tropical disease (NTDs) caused by digenean parasites of the genus Schistosoma. These metazoan parasites belong to the Phylum Platyhelminthes, Class Trematoda, and the genus Schistosoma includes five species infecting humans: Schistosoma haematobium [1], Schistosoma mansoni [2], Schistosoma japonicum [3], Schistosoma intercalatum [4], and Schistosoma mekongi [5]. The German pathologist Theodor Bilharz was the first to describe the parasite in 1851 [1]. In the course of post-mortem examinations carried out on Egyptian soldiers in Cairo, he described a putative parasite responsible for injuries in a letter to his mentor in Germany appointing them to the genus Distomum. In 1858, Weinland [6], remarking substantial and distinct differences between the novel parasite and the species of the genus Distomum, proposed a new genus: Schistosoma (from Greek schistos = split and soma = body). In honor to Theodor Bilharz, Cobbold in 1859 [7], proposed the amendment of the genus Schistosoma for Bilharzia. The name schistosomiasis prevails nowadays despite the frequent references to the disease as bilharziasis, in French and Portuguese medical literature. During the same year, Harley and Cobbold reported that human infection occurred percutaneously [7][8]. Manson in 1902 [9], suggested the existence of two distinct species of Schistosoma and a few years later, in 1908, schistosomiasis was detected for the first time in Brazil. The great contribution of Pirajá da Silva was the identification of two distinct species S. haematobium and S. mansoni [10]. The infections with these two species were finally established by Leiper in 1915 [11] who determined that the life cycle of the parasite included a freshwater snail as an intermediate host. Concomitantly, in Asia, the rash of Kabure or the Katayama syndrome had been described in 1847, in a village near Hiroshima, in Japan. However, S. japonicum was only described in 1904, following the Katsurada incident [3]. Fujinamie and Nakamura in 1909 [12], studied the route of transmission of this species in the vertebrate host, exposing dogs and cats in the rice fields where human cases had been described. Subsequently, eggs were observed in feces of those animals and when necropsied, 40 days after infection, adult worms were collected from the mesenteric veins of the portal system, confirming the presence of the parasite. S. japonicum has historically been described as the only zoonotic species of the genus Schistosoma [13]. However, recent findings have confirmed natural hybridization occurring in the human host among different schistosome species, including S. haematobium, S. bovis, and S. curassoni, with the latter two being agents of intestinal schistosomiasis in cows, sheep, and goats [14]. Moreover, evidence shows that hybrid schistosomes are responsible for the recent schistosomiasis outbreak in Corsica [15].

During the Napoleonic invasion of Egypt, 1799–1801, French troops become infected by S. haematobium. French military physicians attributed the haematuria to the sweating and climate of Egypt, or as the “revenge of the Pharaohs”. During World War II, more than 1300 American soldiers become infected by S. japonicum during the invasion of Leyte in the Philippines. A few years later, during the preparatory military training for the invasion of Taiwan, executed in the Yangtze River basin, soldiers of the People’s Republic of China Red Army were exposed to S. japonicum. Many soldiers had developed Katayama fever, an occurrence that prompted the postponement of the planned amphibious assault on the island [16].

In the 1970s, Praziquantel (PZQ) was developed by Bayer [17][18], a pyrazino-isoquinoline derivative that displayed a powerful activity against parasitic flatworms, including schistosomes. Even though it has been more than 40 years since its development, PZQ continues to be the key drug against schistosomiasis. During the first decades of the 21st century, mass drug administration (MDA) programmes against schistosomiasis that rely on PZQ were launched in endemic regions in Africa, Latin America, and the Middle East [19][20]. For instance, in 2018 alone, ~235 million people received PZQ tablets [21]. Consequently, the global disease burden has dropped. However, the long-term efficacy for optimal morbidity control or transmission elimination by MDA approaches is still controversial, in particular in regions where people live under deficient or non-existent sanitation conditions and are constantly exposed to the parasite. Moreover, reliance on only a few drugs and their mass-administration is likely to drive the development of drug resistance [22]. Nowadays, more than 90% of the cases of schistosomiasis occur in Africa, two-thirds of which are caused by Schistosoma haematobium [23][24][25]. Indeed, the actual number of cases of urogenital schistosomiasis (UGS) may far exceed that previously predicted. Moreover, female genital schistosomiasis increases the risk of human immunodeficiency virus (HIV) transmission [26][27][28] and a recent outbreak of urogenital schistosomiasis in Corsica confirms its re-emergence in Europe [29][30]. In addition to directly damaging the development, health, and prosperity of infected populations, the chronic infection with S. haematobium eventually leads to squamous cell carcinoma (SCC) of the urinary bladder [31]. Thus far, little is known about the interaction of host-parasite that triggers carcinogenesis.

In 2009 schistosome species moved into the post-genomic era, as the first draft genomes for S. mansoni and S. japonicum were published [32][33], and a few years later the S. haematobium genome was released [34]. In the last decade, remarkable functional technology development has occurred, from culture system refinements [35][36], the use of functional tools, such as transgenesis and genome editing [37][38][39][40], to single-cell transcriptomics [41], has accelerated the discovery of targets for novel control strategies

Urogenital schistosomiasis (UGS) is caused by egg-laying S. haematobium worms dwelling within the veins draining the main pelvic organs, including the bladder, uterus, and cervix. The infectious stage of the parasite, larvae cercariae that emerge from freshwater snails infect humans through direct skin penetration. The worms migrate into the circulation, mature, and lodge within the venous plexus of the bladder, where they reproduce, and females release up to 3000 eggs per day. Only half of these eggs are excreted in the urine to propagate the parasite’s life cycle, whereas the remaining eggs become entrapped within capillary beds of the pelvic end organs, especially in the bladder, ureters, and genital tract. UGS is characterized by chronic immune-mediated disease. The continuous inflammatory reaction to the eggs leads to parenchymal tissue destruction, inflammation, fibrosis, granulomata, and ultimately to fibrotic nodules termed sandy patches (Figure 1) [42]. 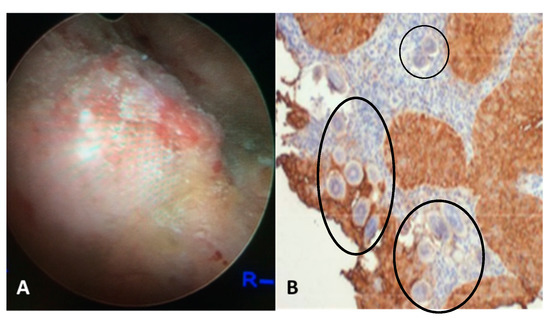 Figure 1. (a) Cystoscopy view of the posterior bladder mucosa with UGS lesions, granulomas, ulcers and tumor. (b) Histology from the bladder mass biopsy showing S. haematobium ova (black circles) and SCC of the bladder (expression of sialyl-Lea).

The lesions induced by the entrapped eggs lead to bladder and ureteral inflammation and hematuria in >50% of cases, in addition to organ deformities such as narrowing of the ureters. Secondary urinary tract and renal infections, hydronephrosis, and ultimately renal failure were observed in millions of people [42]. Importantly, bladder cancer is a frequent and dire complication of chronic UGS. The incidence of SCC associated with UGS is estimated in 3–4 cases per 100,000 [43]. Untreated patients often develop schistosome-related bladder cancer. The tumors are found in a relatively younger age group, commonly present as well-differentiated SCC locally advanced, and have poor overall survival [44][45]. The severity and frequency of UGS sequelae are related to the intensity and duration of the infection [46][47][48]. Genetic alterations, chromosomal aberrations, and cytological changes have been described in carcinomas associated with UGS [42][46][49]. N-nitroso compounds have been implicated as tentative etiologic agents in the process of bladder carcinogenesis [50]. Elevated levels of DNA alkylation damage in carcinomas associated with UGS and a high frequency of G to A transitions in the H-ras gene and in the CpG sequences of the p53 tumor suppressor gene have also been reported [46][48]. These outcomes indicate that UGS-associated SCC arises through a progressive accumulation of genetic changes in epithelial cells. A positive correlation between UGS and increased levels of oxidative stress accompanied by continuous DNA damage and repair in urothelial carcinomas has been observed by several groups [51][52][53]. More recently, we have shown that schistosome eggs co-cultured with informative human cell lines promote the proliferation of the urothelial cells (HCV29 cell line) but inhibit cholangiocytes (H69 cells). Moreover, the TP53 pathway was significantly downregulated, and the estrogen receptor was predicted to be downregulated in urothelial cells exposed only to S. haematobium but not S. mansoni eggs [54].

More
© Text is available under the terms and conditions of the Creative Commons Attribution (CC BY) license; additional terms may apply. By using this site, you agree to the Terms and Conditions and Privacy Policy.
Upload a video for this entry
Information
Subjects: Immunology
Contributors MDPI registered users' name will be linked to their SciProfiles pages. To register with us, please refer to https://encyclopedia.pub/register :
Carlos Lopes
,
Maria João Gouveia
View Times: 284
Revisions: 3 times (View History)
Update Time: 30 Sep 2021
Table of Contents
1000/1000
Hot Most Recent