Submitted Successfully!
Thank you for your contribution! You can also upload a video entry related to this topic through the link below:
https://encyclopedia.pub/user/video_add?id=6524
Check Note
2000/2000
Naphthoquinone and Anthraquinone
Edit
Upload a video
This entry is adapted from 10.3390/ph14010033

Naphthoquinone (NQ) and Anthraquinone (AQ) compounds have gained considerable interest from researchers in diverse pharmacological settings due to their biological activities, making them attractive building blocks for drug development. The literature contains many examples of NQ and AQ-based compounds, mainly derived from natural sources or synthetic, that also demonstrated promising properties against diverse AD targets. The NQ or AQ scaffolds may contribute to the biological effect against AD as main units or significant substructures. In particular, hybrid- and fragment-based drug design strategies allowed the identification of multifunctional NQ and AQ molecules, which displayed antioxidant activity and the ability to inhibit ChEs, BACE, Aβ and tau aggregation.

Alzheimer’s disease is deemed by World Health Organization as one of the most common neurodegenerative diseases and more than 80% of total dementia cases in elderly people. In 2019 World Alzheimer Report estimated over 50 million people living with dementia globally, a figure set to increase to 152 million by 2050 [1]. The clinical manifestations of AD are characterized by misfunctioning and gradual neuronal death, resulting in a progressive memory deterioration and cognitive decline, related to the loss of cholinergic and glutamatergic function. The two distinctive hallmarks of AD are the presence of extracellular accumulated Aβ plaques [2] and hyperphosphorylated tau protein in the form of intracellular neurofibrillary tangles (NFT) [3]. AD pathogenesis is not yet fully understood, even if during the years different hypotheses have been formulated; currently it is usually described as a multifactorial disease caused by several factors which include: loss of cholinergic transmission, excessive protein misfolding and Aβ aggregation [4][5], oxidative stress and free radical formation [6], metal dyshomeostasis [7], excitotoxicity, and neuroinflammatory processes [6]. Moreover, the range of targets in AD is increasing, and for most part, enzymes have been recognized as crucial partners to AD onset and progression [8]. Hence, a number of molecules has entered clinical phase study with their targets, such as β-secretase (BACE1), phosphodiesterase, phospholipase A2, mitogen-activated protein kinase (MAPK) and sirtuin 1 (SIRT1), as an example (clinicaltrials.gov).

Bulk of evidence sheds light on the interconnected role played by these factors in AD pathogenesis and, consequently, on the difficulties of setting up more effective drugs over current therapies. The marketed drugs for the treatment of AD, namely the acetylcholinesterase (AChE) inhibitors donepezil, rivastigmine, and galantamine and the NMDA receptor antagonist memantine, are regarded as merely symptomatic, respectively modulating the cholinergic or glutamatergic function [9]. However, the synergistic effect between donepezil and memantine in combination regimen is showing ameliorated outcomes for cognition, global assessment, daily activities, and neuropsychiatric symptoms, but lower acceptability than monotherapy [10].

In this scenario, the medicinal chemistry efforts have been focused on the development of novel chemotypes which could include in their structures the required pharmacophoric features to target one or more of these factors implicated in AD. Many examples of NQ and AQ compounds from natural sources or synthetic have emerged in virtue of their promising properties against AD. 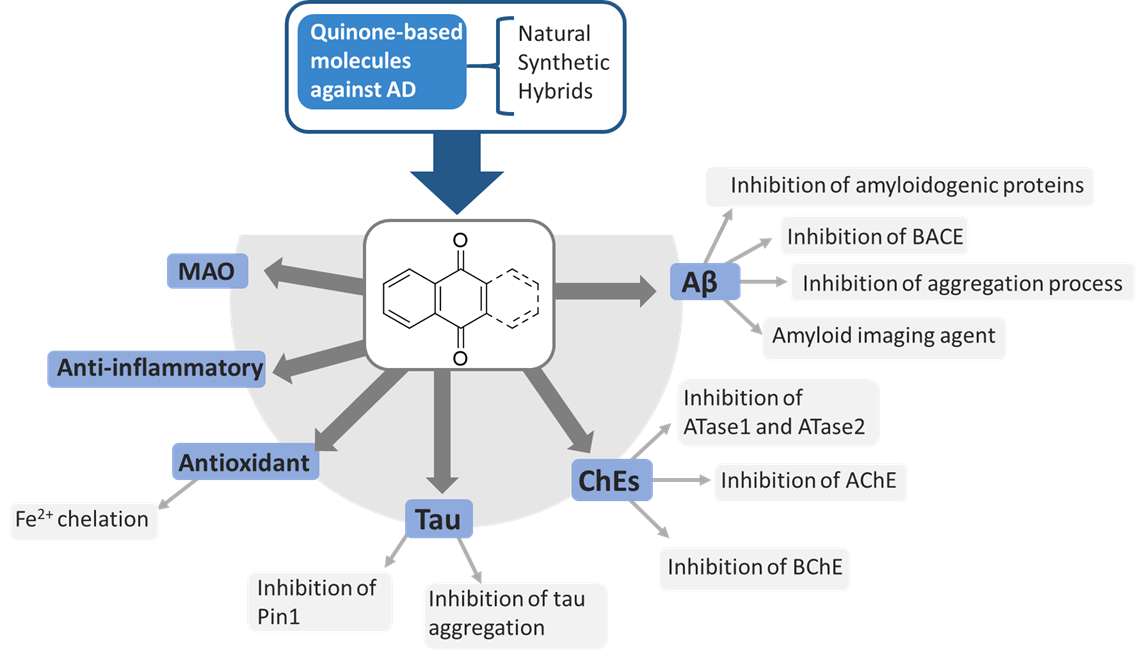 NQs are colored chemical compounds that exist in nature as secondary metabolites of plants that are used in many traditional medicines in Asian countries. NQs have gained considerable interest from researchers due to their antibacterial, antifungal, antitumor, and insecticidal properties [11][12][13][14].

The diverse set of pharmacological activities displayed by these compounds makes the NQ scaffold very attractive as a building block for drug development. The most stable isomeric form, 1,4-NQ, has been widely applied in organic reactions, such as Michael-type additions [15][16], aldol-type reactions, Diels-Alder reactions [17][18], cycloadditions [19], Friedel–Crafts reactions [20] and epoxidation [21][22] thanks to its two reactive functional groups, such as a C–C double bond and two ketone carbonyls.

Recent studies have also shed light on the neuroprotective effects and Aβ aggregation inhibition performed by 1,4-NQs [23][24][25][26], thus suggesting the NQ scaffold as valuable chemotype for the design of AD therapeutics.

NQ can be considered a privileged structure since its derivatives have demonstrated the ability to interact with several and different biological/pharmacological targets, thus exhibiting a wide range of activities. However, the effect of 1,4-NQs on neurodegenerative diseases has been subject to few studies. Only recently, natural and synthetic NQ derivatives have started to be explored as potential agents for the treatment of AD.

Among the AQ-based molecules which have been and are being currently studied as potential central nervous system (CNS) active agents, most of them derive from natural sources. To date, more than 700 natural AQs have been isolated from plants, lichens and fungi. In plants, AQ metabolites are present in a wide range of species, predominantly in the families of Rubiaceae, Polygonaceae, and Rhamnaceae. These compounds are structurally derived from the 9,10-anthracenedione nucleus [27], that is present in the form of monomers and bi-AQs, when including in their structures one or two basic cores, respectively [28].

In the field of drug discovery, the AQ nucleus is an important scaffold associated with a wide range of pharmacological properties including anti-inflammatory, anti-cancer, diuretic, laxative, antidepressant, antioxidant and anti-parasitic activities [29]. Recently, the class of natural AQ compounds has aroused great interest for its ability of hitting different molecular targets involved in AD. Different AQ-based molecules have shown to be capable of reducing the loss of cholinergic function in Alzheimer’s patients by acting as cholinesterase inhibitors [30], reducing the formation of protein aggregates, or acting as antioxidants, thus impairing the increased ROS formation associated with the AD progression.

The cause of Alzheimer’s disease is still unknown, and the discovery of factors related to the key pathophysiological hallmarks of AD has not been able to uncover the source of the neurodegenerative processes observed in patients. The currently available treatments do not allow long-lasting cytoprotection of nervous cells and appear to be only symptomatic with limited efficacy and perturbing side effects [31][32]. Hence, from the medicinal chemistry point of view, there is a need of identifying novel chemotypes with a view to formulating medicaments able to ensure a more positive disease outcome over current therapy. Phytochemicals from medicinal plants and other sources are getting attention, as they may provide a valuable alternative to synthetic molecules. During the last years, the ongoing search of 1,4-quinone-based structures, namely NQ and AQ derivatives, have favored a deepening insight of their potential also for treatment of AD. These aromatic bi- and tricyclic systems have demonstrated the ability to tackle single or, even more, multiple factors, including ChEs, Aβ and tau proteins, as the most frequently affected targets, thus confirming a multitarget profile, that enables them as valuable candidates for AD therapy. The greatest results have been obtained by hybrid molecules composed of a NQ- or AQ-based derivative in combination with another relevant structure, merged or tethered through a linker of variable length and nature, in order to integrate their properties for a more effective treatment of AD. The new SAR insights gathered from this review provide crucial information for the development of more promising options for AD therapy towards the setting up of a drug candidate based on NQ and AQ scaffolds. However, most of the research in this context has limited the study of biological evaluation to an early stage, mainly at enzyme and cellular level, and a few studies have explored the drug-like properties of these molecules, thus further efforts are deserved, before they could be translated into therapeutics for an effective AD management.

More
© Text is available under the terms and conditions of the Creative Commons Attribution (CC BY) license; additional terms may apply. By using this site, you agree to the Terms and Conditions and Privacy Policy.
Upload a video for this entry
Information
Subjects: Chemistry, Medicinal
Contributor MDPI registered users' name will be linked to their SciProfiles pages. To register with us, please refer to https://encyclopedia.pub/register :
Michele Tonelli
View Times: 259
Revisions: 2 times (View History)
Update Time: 19 Jan 2021
Table of Contents
1000/1000
Hot Most Recent