Submitted Successfully!
Thank you for your contribution! You can also upload a video entry related to this topic through the link below:
https://encyclopedia.pub/user/video_add?id=5949
Check Note
2000/2000
Auditory neurons in inner ear
Edit
Upload a video
This entry is adapted from 10.3390/ijms22010131

These neurons transmit auditory information in the form of electric signals from sensory hair cells to the first auditory nuclei of the brain stem, the cochlear nuclei. Congenital and acquired neurosensory hearing loss affects millions of people worldwide. An increasing body of evidence suggest that the primary auditory neurons degenerate due to noise exposure and aging more readily than sensory cells, and thus, auditory neurons are a primary target for regenerative therapy. A better understanding of the development and function of these neurons is the ultimate goal for long-term maintenance, regeneration, and stem cell re-placement therapy.

According to the World Health Organization, hearing impairment, the partial or total inability to hear sounds, is among the top 10 disabilities of today’s society and affects approximately 6% of the world’s population. Neurosensory hearing loss is permanent and results from the death of neurons or sensory cells that have no ability to regenerate. Auditory neurons are a critical component of the auditory pathway, as they transmit auditory information from sensory hair cells to the cochlear nucleus in the brainstem. The current effective therapies for hearing impairment utilize either hearing aids to increase hair cell stimulation or cochlear implants as a substitute for hair cells. These medical devices require the presence of functional auditory neurons in the inner ear. Therefore, recent studies focus on possibilities for neuronal replacement, including exogenous stem cell transplantation and endogenous cell source replacement. Transcriptional networks are key in controlling the regeneration or replacement of auditory neurons from stem cells. Understanding and identifying individual transcription factors involved in the development and survival of auditory neurons are crucial for future more effective treatments for hearing loss [1].

The pathway descending from the cortex is called the efferent system or the olivocochlear system [2]. While being unique to the auditory region, it consists of efferent neurons subdivided into medial olivocochlear efferents and lateral olivocochlear efferents. The efferents are derived from facial branchial motor neurons. The groups differ in the neuron bodies’ locations and degree of myelination. Thicker myelinated medial efferents form synapses with outer hair cells of the organ of Corti in the cochlea (Figure 1A). Thin, unmyelinated lateral efferents innervate the dendrites of nerve fibers connecting inner hair cells [2]. The pathway uses acetylcholine as the major neurotransmitter [3][4]. The efferent system is involved in the improvement of signal detection, the functioning of the outer hair cells, and protection of the cochlea from acoustic damage. The difference in the olivocochlear system efficiency is an essential factor of the vulnerability to permanent acoustic injury [5].、 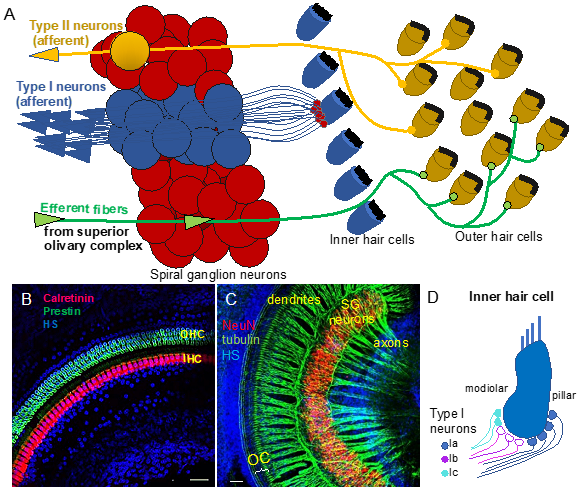 Figure 1. Auditory neurons form the spiral ganglion in the cochlea and connect hair cells in the organ of Corti to cochlear nuclei in the brain stem. (A) Diagram shows innervation of the organ of Corti. Type I neurons extend radial fibers toward the inner hair cells (5–30 type I neurons innervate one inner hair cell), and type II neurons provide diffuse innervations to the outer hair cells and supporting cells within the cochlea. Efferent axons from superior olivary complex innervate the outer hair cells. (B) Whole-mount immunolabeling of the mouse cochlea shows outer hair cells (OHC, labeled by anti-prestin) and inner hair cells (IHC, labeled by anti-calretinin) forming the organ of Corti (OC). (C) Whole-mount immunostaining of the spiral ganglion (SG) neurons (anti-NeuN, a neuronal soma marker) shows the dendrites extending in the periphery to the organ of Corti (OC) and the axons traveling to the central nervous system (anti-acetylated alpha-tubulin-labeled nerve fibers). Scale bars, 50 μm. Confocal images (B) taken from [6] and (C) unpublished data. (D) Schematic drawing of synapses of molecular subtypes of type I neurons on the inner hair cell. Type I neurons are segregated into three distinct groups: types Ia (blue), Ib (magenta), and Ic (green-blue) of the spiral auditory neurons, which extend peripheral processes that are spatially segregated on the surface of the IHC. HS: Hoechst nuclear staining.

Neurons forming the ascending neuronal pathway innervate the sensory epithelia of the organ of Corti in the cochlea and transmit auditory information in the form of electrical signals to the brain (Figure 1A). The somata of auditory neurons form the spiral ganglion that twists within a coiled cochlear duct. Peripheral neuronal processes innervating hair cells of the organ of Corti are referred to as the dendrites, whereas the central processes are the axons (Figure 1B,C). Most of them are myelinated, which is considered to be a characteristic of the axons. The axons of the afferent neurons merge into the vestibulocochlear nerve, also known as the VIII cranial nerve, relaying acoustic information further to the central nervous system. Two types of auditory neurons have been described in the cochlea (Figure 1A; [7][8]). Large, myelinated, bipolar type I neurons connect the inner hair cells in the organ of Corti to the cochlear nuclei in the brain. Smaller, pseudounipolar type II neurons connect the outer hair cells to the cochlear nuclei, and their peripheral processes remain unmyelinated and thin. Type I neurons represent the majority of all neurons in the spiral ganglion (approximately 95%), and a total of 5–30 type I neurons innervate one inner hair cell in the cochlea [8]. In contrast, type II spiral ganglion neurons receive input from dozens of outer hair cells, as well as supporting cells [9][10]. Type II auditory neurons appear to play a role in pain signaling and in damage perception [11][12]. Type I neurons can be further divided into three genetically distinct subtypes, known as type Ia, Ib, and Ic [13][14][15]. The subclasses exhibit significant variations, such as differences in the expression of transcription factors, neurotransmitter receptors, channel subunits, or cell adhesion molecules. Type Ia, Ib, and Ic neurons show different spatial arrangements, as well as high selectivity for a limited range of frequencies. Additionally, type I spiral ganglion neurons exhibit differences in spontaneous firing rates (SRs). Thus, they can be classified as low-SR, medium-SR, and high-SR fibers and single inner hair cells appear to be innervated by fibers with different SRs [16][17][18] (Figure 1D). Although the total number of auditory neurons decreases with age, type Ic neurons seem to be particularly vulnerable to noise or aging [13].

3. Tonotopic Organization of Auditory Neurons in the Cochlea

In the auditory system, cochlear sensory hair cells are connected to the brain by spiral ganglion neurons that are organized within the cochlea in an orderly fashion according to frequency, a so-called tonotopic organization, with high frequencies at the base and low frequencies at the apex [19][20]. The position of spiral ganglion neurons along the tonotopic axis of the cochlea correlates with the input frequency received from inner hair cells [19] (Figure 2A). The phenotype of auditory neurons and, thus, tonotopic map formation are also influenced by the basal–apical neurotrophin gradient, brain-derived neurotrophic factor (BDNF), and neurotrophin 3 (NT-3) [21]. In the cochlea, both the neurotrophins BDNF and NT-3 are produced in the developing sensory epithelia, whereas their respective receptors neurotrophic tyrosine kinase, receptor, type 2 (TrkB) and neurotrophic tyrosine kinase, receptor, type 3 (TrkC) are expressed on auditory neurons. NT-3 and BDNF are expressed in opposing apical–basal gradients, with the highest levels of NT-3 in the base [21]. Neurotrophins not only affect the survival but, also, the axon guidance and maturation of the firing properties of auditory neurons [22].

Due to the specialized innervation within the cochlea, auditory processes respond to a narrow range of frequencies, with the maximal response at one particular frequency. It is defined as the sound frequency at which an individual auditory nerve fiber is most sensitive, the characteristic frequency. The detection of complex sounds depends on the properties of auditory neuronal subtypes, particularly on spontaneous the firing rate, as well as on the proportions of these neuronal subtypes along the tonotopic axis. The distribution of these subtypes varies based on species [23]. The tonotopic (or cochleotopic) organization is maintained throughout the auditory pathways up to the cortex [24]. The formation of a tonotopic map requires the precise projection of the spiral ganglion neuron afferents of the cochlea onto the first auditory nuclei of the hindbrain, the cochlear nuclei (Figure 2B). The tonotopy of the cochlear nuclei is imprinted via the precise distribution of auditory axons with respect to their positions of origin in the spiral ganglion [25].

More
© Text is available under the terms and conditions of the Creative Commons Attribution (CC BY) license; additional terms may apply. By using this site, you agree to the Terms and Conditions and Privacy Policy.
Upload a video for this entry
Information
Subjects: Pathology
Contributor MDPI registered users' name will be linked to their SciProfiles pages. To register with us, please refer to https://encyclopedia.pub/register :
Pavlínková Gabriela
View Times: 362
Revisions: 2 times (View History)
Update Time: 04 Jan 2021
Table of Contents
1000/1000
Hot Most Recent