Submitted Successfully!
Thank you for your contribution! You can also upload a video entry related to this topic through the link below:
https://encyclopedia.pub/user/video_add?id=5893
Check Note
2000/2000
Bladder Cancer
Edit
Upload a video
This entry is adapted from 10.3390/cancers12123706

The overwhelming majority of bladder cancers are transitional cell carcinomas. Albeit mostly monotonous, carcinomas in the bladder may occasionally display a broad spectrum of histological features that should be recognized by pathologists because some of them represent a diagnostic problem and/or lead prognostic implications. Sometimes these features are focal in the context of conventional transitional cell carcinomas, but some others are generalized across the tumor making its recognition a challenge. For practical purposes, the review distributes the morphologic spectrum of changes in architecture and cytology. Thus, nested and large nested, micropapillary, myxoid stroma, small tubules and adenoma nephrogenic-like, microcystic, verrucous, and diffuse lymphoepithelioma-like, on one hand, and plasmacytoid, signet ring, basaloid-squamous, yolk-sac, trophoblastic, rhabdoid, lipid/lipoblastic, giant, clear, eosinophilic (oncocytoid), and sarcomatoid, on the other, are revisited. Key histological and immunohistochemical features useful in the differential diagnosis are mentioned. In selected cases, molecular data associated with the diagnosis, prognosis, and/or treatment are also included.

Bladder cancer is a frequent neoplasm [1] in which tobacco use, pollution, and other varied agents have been directly implicated in its genesis and development [2]. Most of them are composed of transitional cells of low/intermediate grade, papillary architecture, and invasion limited to the lamina propria and submucosa. However, a smaller but significant number of cases do display dismal features like high-grade, non-papillary growth patterns, and muscularis propria invasion, with these patients pursuing an aggressive clinical course.

Aside from transitional cell carcinoma (TCC), other histological subtypes, like conventional squamous cell carcinoma, adenocarcinoma, and neuroendocrine carcinoma, are quite frequently seen in clinical practice, alone or in combination, particularly in the context of high-grade cases. These cases are not the subject of this review.

Although TCC is a histologically monotonous neoplasm composed in the vast majority of cases by easily recognizable transitional cells, a small subset of cases displays a broad spectrum of architectural and/or cytological characteristics that should be recognized since some of them carry diagnostic difficulties and/or prognostic implications [3]. This recognition is increasingly important now that very promising advances linking morphological variants with genomic signatures are being identified [4].

Talbert and Young reported in 1989 three cases of a deceptively benign bladder carcinoma characterized by small packed cellular aggregates closely resembling von Brunn nests and nephrogenic adenoma [5]. Isolated cases of this histological subtype of bladder cancer had previously appeared in the literature, always being referred to as of von Brunn nest origin [6]. Now, nested UC is well recognized and fully characterized by histological, immunohistochemical, and molecular perspectives [7][8]. Under the microscope, nested UC appears as a non-papillary neoplastic growth of bland cells with scarce atypia arranged in small nests (Figure 1a) showing an evident infiltrating growth pattern at different levels of the bladder wall. Typically, the tumor does not induce a stromal reaction nor is accompanied by inflammatory infiltrates. Problems to recognize nested UC may arise in small superficial biopsies if crushing artifacts are present or if the infiltrative nature is not seen.

UC may sometimes display a micropapillary architecture. Delicate, thin, and fragile papillae without stromal axis are the hallmark of this morphological variant of UC (Figure 1c). To note, the invasive component of micropapillary UC shows nests with cells detached from the basal membrane, a typical artifact in this tumor that mimics lymphatic invasion and is associated with biological aggressiveness [9]. The vascular invasion is a very frequent histological finding (Figure 1d). Aside from rare pure examples, the majority of cases are mixed with a conventional transitional cell carcinoma, usually high grade. Like the rest of micropapillary carcinomas across the body [10], this histological subtype of UC has a dismal prognosis, even worse than conventional high-grade UC at the same stage [11], and typically presents with advanced stages at diagnosis. Although exceptional, micropapillary carcinomas from other sites may metastasize to the urinary bladder [12], making the correct diagnosis more difficult.

The first description of this variant of UC was made in 1994 by Amin et al. [13], where they stressed the histological similarities of this bladder tumor with the classic papillary serous carcinoma of the ovary. After that, many series have been published all along the urinary tract, including the renal pelvis and ureter [14][15].

UC may display focal myxoid changes in the stroma (Figure 1e) mimicking the colloid adenocarcinomas seen in other sites. This change has been previously reported [20][21] and when observed in transurethral resection specimens, may lead to an erroneous interpretation of colonic adenocarcinoma invading the bladder wall. Solid cell nests immersed in a basophilic edematous stroma are the hallmark of this histological change, which is usually focal but can be generalized in some isolated cases. Again, immunohistochemistry is of much help in cases in which the transitional phenotype of the tumor is not evident on hematoxylin-eosin slides. GATA3 positivity, co-expression of CK7 and CK20, and CDX-2 negativity should resolve the diagnostic dilemma in doubtful cases [20]. Attention must be paid, however, to the occasional CK7 positivity of some colorectal adenocarcinomas, a finding that is a sign of dismal prognosis [22].

Very occasionally, UC is composed of low-grade cells arranged in small tubules resembling cystitis glandularis or nephrogenic adenoma (Figure 1f) [23]. The bland cytologic features of this histologic subtype contrast with its frank infiltrative nature, even reaching the muscularis propria in some cases. Since nephrogenic adenoma may display also a concerning pseudo-infiltrative growth [24], an immunohistochemical study with PAX-8, CK7, p63, and napsin A [25] may be useful to make the differential diagnosis in problematic cases. The clinical significance of this histologic change is not established so far.

Plasmacytoid UC is an aggressive tumor. This cytologic variant of UC can present as pure tumors or mixed with conventional UC and/or with other non-conventional UC. For example, mixed micropapillary and plasmacytoid UC cases have been occasionally reported [26]. Histological similarities with multiple myeloma were noticed since the first report by Sahin et al. in 1991 [27]. Since this original description, several large series have been published so far all of them confirming its dismal prognosis [28].

In its typical presentation, the tumor appears as flat, non-papillary, highly cellular masses growing diffusely in the urinary tract wall with infiltrative edges and frequent vascular invasion images. Neoplastic cells are non-cohesively arranged and show lateralized cytoplasm, nuclear atypia, and high mitotic count (Figure 2a). In doubtful cases, or patients with a previous history of plasma cell dyscrasia, immunohistochemistry is of help revealing its epithelial, non-plasmacytic, nature. Briefly, GATA-3 and CK7 are positive and CD 38 is negative. Positive immunostaining with CD 138 may be observed in this neoplasm, but this finding does not preclude the diagnosis of plasmacytoid UC [29]. 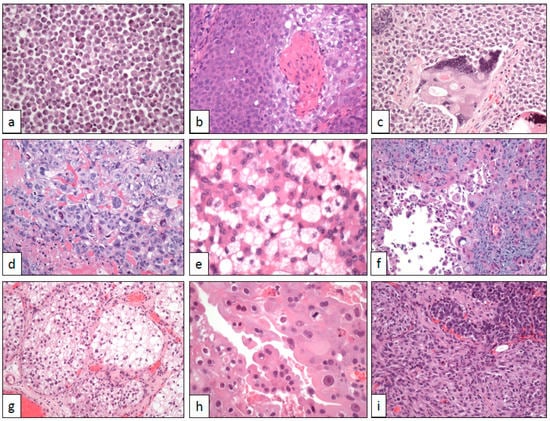 HER2 overexpression has been observed by FISH in plasmacytoid UC [30]. Contrary to what happens in most UC, plasmacytoid variants do not seem to harbor TP53 gene mutations in a sequencing analysis [29]. On the other hand, TERT gene promoter mutations have been detected [31]. A study using whole-exome sequencing has detected somatic alterations in the CDH1 gene of 84% of plasmacytoid UC, a finding of clinical aggressiveness that seems to be specific to this tumor variant [32].

Since signet-ring cell features are very rare in UC, and their identification in transurethral resection specimens can raise the possibility of a metastatic seed from a neoplasm originating in the digestive tract. A careful search of the classical urothelial features (nests of transitional cells, papillae, in situ carcinoma in the surface epithelium, etc.) in the biopsy, if present, may be of help in the differential diagnosis. Otherwise, the clinical context of the patient and a basic immunohistochemical panel, for example, CK7/20, GATA-3, CDX-2, and p63, should resolve the dilemma. The analysis of the national Surveillance, Epidemiology, and End Results (SEER) database of 318 such cases confirms the worse prognosis of this histologic variant compared with conventional UC [33].

Histologically, the tumor is deeply infiltrative and shows a typical biphasic pattern (Figure 2b). Basaloid atypical cells with high mitotic rate and scarce cytoplasm are arranged in lobes and nests showing peripheral palisading and stromal reaction. Basaloid nests are centered by squamous islands with evident keratinization. p16 is intensely positive in tumor cells.

More
© Text is available under the terms and conditions of the Creative Commons Attribution (CC BY) license; additional terms may apply. By using this site, you agree to the Terms and Conditions and Privacy Policy.
Upload a video for this entry
Information
Subjects: Oncology
Contributor MDPI registered users' name will be linked to their SciProfiles pages. To register with us, please refer to https://encyclopedia.pub/register :
Jose Ignacio López
View Times: 177
Revisions: 2 times (View History)
Update Time: 30 Dec 2020
Table of Contents
1000/1000
Hot Most Recent