Submitted Successfully!
Thank you for your contribution! You can also upload a video entry related to this topic through the link below:
https://encyclopedia.pub/user/video_add?id=5849
Check Note
2000/2000
Bio-catalysis in Multicomponent Reactions
Edit
Upload a video
This entry is adapted from 10.3390/molecules25245935

Enzyme catalysis is a very active research area in organic chemistry, because biocatalysts are compatible with and can be adjusted to many reaction conditions, as well as substrates. Their integration in multicomponent reactions (MCRs) allows for simple protocols to be implemented in the diversity-oriented synthesis of complex molecules in chemo-, regio-, stereoselective or even specific modes without the need for the protection/deprotection of functional groups.

Recent advances in organic synthesis, fueled by the need for more efficient, environmentally compatible processes, have led to the development of new strategies. Multicomponent reactions (MCRs) are one such strategy. In these reactions, three or more components react together in one pot, generating a rapid assembly of high-complexity molecular architectures resulting in a single-molecular entity containing most, if not all, the starting materials components. Compared to standard organic synthesis wherein compounds are prepared individually and sequentially, consisting of isolation/purification steps that oftentimes generate waste products, MCRs allow for a fast construction of complex and diverse molecular structures in a convergent manner under mild conditions in a single step, leading, in many instances, to the formation of heterocyclic compounds [1][2][3][4]. A unique characteristic of MCRs is their simplicity and atom efficiency, high selectivity and low toxicity of readily available starting materials. Therefore, the general principles of green chemistry can easily be applied to MCRs [5].

Given the above characteristics, MCRs have experienced an exponential growth in recent years due to their numerous synthetic applications in pharmaceuticals in fine chemicals, as well as in drug discovery and optimization [6][7].

Multicomponent reactions have been known since a long time. The Strecker reaction is the first documented MCR whereby α-amino acids were prepared from an aldehyde or ketone, ammonia and hydrogen cyanide [8][9]. Since then, many other MCRs have been discovered, and there is a multitude of these reactions today, which include, among others, the Asinger reaction, Biginelli reaction, the Hantzsch pyridine synthesis, Mannich, Strecker and Ugi [10][11].

Most MCRs are mediated by a variety of catalysts [12][13][14]. Although many of them are important industrial organic reactions, the development of biocatalytic MCRs has only recently attracted the interest of organic chemists [15]. Few direct bio-catalyzed asymmetric MCRs have been reported in the literature.

Many enzymes exhibit diverse catalytic activity that goes beyond their natural substrates. This phenomenon, known as enzyme promiscuity [16], can be easily exploited and applied in MCRs. Enzymes are ecofriendly, biodegradable and their reactions occur under mild conditions [17], thus outperforming most traditional chemical catalysts. When immobilized on solid supports [18], they can be recovered and reused in multiple transformations. Enzymes, therefore, are becoming a better alternative to chemical catalysts and are ideal in MCRs.

There are a few multicomponent reactions catalyzed by enzymes but do not have special names. These are classified under this section according to the number of reactants involved in the reaction.

A series of 4H-pyran derivatives similar to those shown in scheme 1 were synthesized by three-component reactions catalyzed by various enzymes [19][20][21].

The dihydropyrano[2,3-c]pyrazole skeleton can be accessed by a three-component reaction of aldehyde/ketone or isatin, malononitrile and 3-methyl-1H-pyrazol-5(4H)-one, catalyzed by BSA. The reaction is described to take place at ambient temperature in a mixture of ethanol and water to afford the products in 76–94% yield [23].

The same group later on developed a new synthesis of ortho-aminocarbonitriles from aromatic aldehydes, cyclohexanone and malononitrile using porcine pancreas lipase (PPL) as the catalyst [24]. In another report, a one-pot synthesis of spiropyrazolo[3,4-b]pyridine and spiro-oxindole scaffolds catalyzed, respectively, by papain and catalase, was carried out starting from isatin, 1,3-dicarbonyls and 3-methyl-5-amino pyrazole [25].

In addition to good-to-high yields, other advantages of this protocol include operational simplicity, simple filtration, no need for a chemical catalyst or activation and no column chromatographic purification and the biocatalyst tolerance to a wide range of substrates.

The proposed reaction mechanism begins with the normal formation of an iminium ion from the aldehyde and the basic lysine residues of the enzyme. At same time, the removal of the proton from malononitrile by the free basic amino group of BSA forms a carbanion that, subsequently, undergoes a Knoevenagel condensation with the iminium ion. The reaction intermediate condenses with the activated pyrazalone in a Michael addition reaction to form an adduct whose cyclization affords the product (scheme 3). 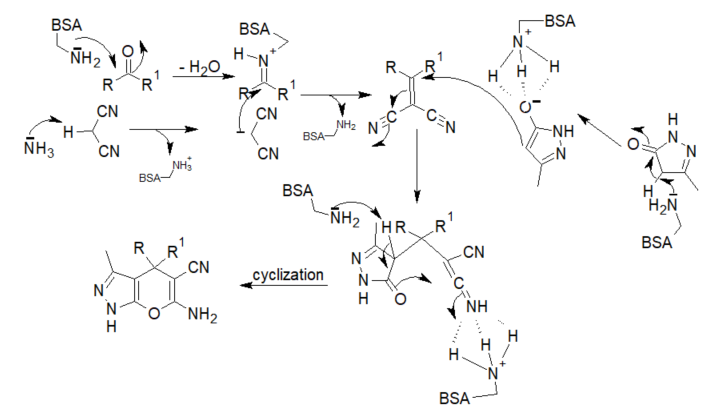 Enzyme-catalyzed four-component reactions are not very common. The first reaction recorded in this category is the synthesis of dihydropyrano[2,3-c]pyrazoles [26] (see scheme 2), mediated by Aspergillus niger lipase (ANL) from a mixture of ethyl acetoacetate, hydrazine hydrate, aldehyde/ketone and malononitrile. The reaction was carried out at room temperature and afforded excellent yields of the expected products. This report was followed by the porcine pancreas lipase (PPL) MCR developed by Bihani et al. [27] in what they termed the “pot, atom and step economic (PASE)” synthesis of 5-monosubstituted barbiturates bearing biologically active pyrazalone cores (scheme 4), which were then screened against selected human pathogens with good pharmacological activity.

The mechanism of this reaction was not investigated, but the initial possible formation of a pyrazalone derivative followed by its condensation with the barbiturates was ruled out by the authors.

In another proof of its catalytic promiscuity, BSA was also shown to efficiently catalyze the one-pot four-component green synthesis of pyrano[2,3-c]pyrazoles (see scheme 2). The catalyst could be recovered and reused up to five consecutive times with minimal loss of activity [28].

The group of Wu reported an aldol–Michael addition cascade reaction leading to the formation of six carbon–carbon/carbon–nitrogen bonds and two ring systems in a single operation [29] using Candida antarctica lipase B (CAL-B) as the biocatalyst (scheme 5).

The reaction involved a lipase/acetamide-catalyzed Michael addition of ketones to nitroalkenes, affording spiro-oxazino derivatives. While the reaction worked well with p-nitrobenzaldehyde, low yields were obtained with other aldehydes. The proposed reaction mechanism involved an initial aldol condensation, followed by a Michael addition of the acetamide-activated aldol to the nitroalkene [30][31]. Cyclization of this adduct and the addition of a second molecule of the ketone leads to the final product as a racemic mixture (scheme 6). 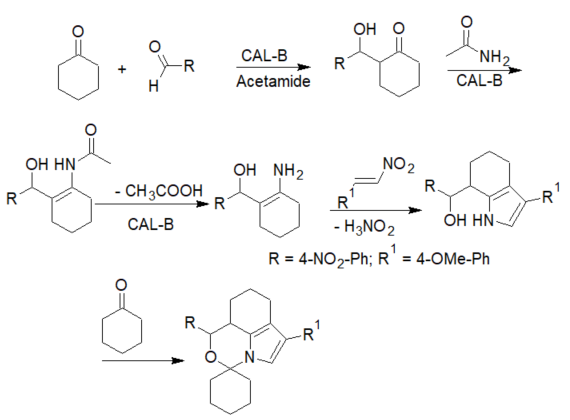 Scheme 6. Mechanism of the enzyme-catalyzed 5-component synthesis of spiro-oxazino derivatives.

Based on these preliminary results, the authors were able to extend the scope of the reaction by using a preformed aldol compound. Under these new conditions, CAL-B catalyzed a two-step, one-pot multicomponent synthesis of spiro-oxazino derivatives, starting from readily available aldehydes, activated olefins, cyclohexanone and acetamide [32]. The first step consisted of the PPL-catalyzed asymmetric aldol reaction, followed after filtration of the PPL by the addition of CAL-B and all other substrates in the same pot, giving acceptable yields with diastereoselectivity and enantioselectivity of up to 93% ee. This approach opened up the door to many potential applications in the synthesis of complex organic molecules hardly accessible by other protocols.

More
© Text is available under the terms and conditions of the Creative Commons Attribution (CC BY) license; additional terms may apply. By using this site, you agree to the Terms and Conditions and Privacy Policy.
Upload a video for this entry
Information
Subjects: Chemistry, Organic
Contributor MDPI registered users' name will be linked to their SciProfiles pages. To register with us, please refer to https://encyclopedia.pub/register :
WAYIZA MASAMBA
View Times: 283
Revisions: 2 times (View History)
Update Time: 28 Dec 2020
Table of Contents
1000/1000
Hot Most Recent