Submitted Successfully!
Thank you for your contribution! You can also upload a video entry related to this topic through the link below:
https://encyclopedia.pub/user/video_add?id=558
Check Note
2000/2000
Colorectal Cancer Cells
Edit
Upload a video
This entry is adapted from 10.3390/ijms21051827

The majority of deaths related to colorectal cancer (CRC) are associated with the metastatic process. Alternative therapeutic strategies, such as traditional folk remedies, deserve attention for their potential ability to attenuate the invasiveness of CRC cells. The aim of this study is to investigate the biological activity of brown Cuban propolis (CP) and its main component nemorosone (NEM) and to describe the molecular mechanism(s) by which they inhibit proliferation and metastatic potential of 2 CRC cell lines. CP and NEM significantly decreased cell viability and inhibited clonogenic capacity of CRC cells in a dose and time-dependent manner, by arresting the cell cycle in the G0/G1 phase and inducing apoptosis. Furthermore, CP and NEM downregulated BCL2 gene expression and upregulated the expression of the proapoptotic genes TP53 and BAX, with a consequent activation of caspase 3/7. They also attenuated cell migration and invasion by inhibiting MMP9 activity, increasing E-cadherin and decreasing β-catenin and vimentin expression, proteins involved in the epithelial–mesenchymal transition (EMT). NEM, besides displaying antiproliferative activity on CRC cells, is able to decrease their metastatic potential by modulating EMT-related molecules. These findings provide new insights about the antitumoral properties of CP, due to NEM content.

Colorectal cancer (CRC), one of the most common oncological disease worldwide, is an aggressive cancer with metastatic behavior [1][2][3]. Approximately 40%–60% of CRC patients develop metastases in other organs, in particular liver and lungs, which represent the main sites of CRC metastasis [4]. Although surgical resection of metastasis can here be often performed, metastatic CRC remains one of the principal causes of cancer-related morbidity and mortality [5][6].

Tumor cells acquire the capacity to infiltrate blood or lymphatic vessels through an epithelial to mesenchymal transition (EMT) process, which increases cell migration and invasion, intravasation and extravasation. Taken together, these processes result in increased tumor aggressiveness and metastasis [7][8]. Therefore, the proteins associated to cell migration and invasion, as well as the mechanisms involved in EMT, represent a pharmacological target for the treatment of CRC patients [9][10].

The pharmacological therapy of CRC involves biological or synthetic drugs able to suppress or prevent cancer progression [11][11]. In this context natural products, widely studied by the scientific community, are considered an interesting option, especially when they are safe and inexpensive [12][13]. Several clinical studies have shown that plant-based products exert anticancer effects by numerous mechanisms, i.e., the induction of cell cycle arrest and cell death by apoptosis or necrosis, the activation of DNA repair systems, the regulation of signaling pathways involved in cancer progression, and the inhibition of cancer invasion and metastasis [14][15][16].

It is known that many bee products, such as royal jelly, honey, pollen, propolis and bee venom, display antitumor and chemo-preventive activity and can be evaluated as alternative strategies for cancer treatment [17][18][19]. Propolis, a natural resinous bee product, has been used since ancient times as a traditional remedy for the treatment of various diseases, and in recent years its anticancer potential has been demonstrated [20][21][22][23]. The therapeutic effects of propolis depend on its chemical composition, which is related to the geographical area of origin and the environmental conditions of its production [24][25][26]. Several studies have shown that brown Cuban propolis (CP) exerts antiproliferative and cytotoxic properties on different cancer cell lines [27][28][29]. The chemical profiling of this type of propolis indicated that nemorosone (NEM), a prenylated benzophenone, is the main component of brown CP [30][31][32] to which the biological properties of this propolis can be attributed [33][34][35].

This study clearly showed that brown Cuban propolis and NEM displayed a pronounced inhibitory effect on the proliferation of HT-29 and LoVo cells. Furthermore, according to others reports [29][33][35], considering the NEM content of CP and the IC50 values obtained in this study, we further confirmed that the biological activity of CP is strictly dependent on its nemorosone content. (Figure 1)

Figure 1. Effect of NEM and CP on CRC cell viability. HT-29 and LoVo cells were exposed to increasing concentrations of NEM (A–C) and CP (D–F) for 24, 48 and 72 h. Data are presented as mean ± S.D. of three independent experiments.

Their effect on HT-29 and LoVo viability was supported by the results of the clonogenic assay, which showed a significant decrease of the colony-forming capacity of CP- and NEM-treated cells compared to untreated cells, further confirming their antiproliferative effect. We have previously reported that CP and NEM have an inhibitory effect on LoVo cell viability [29], thus the results of the present study confirmed this finding and extended it to another CRC cell line. (Figure 2) 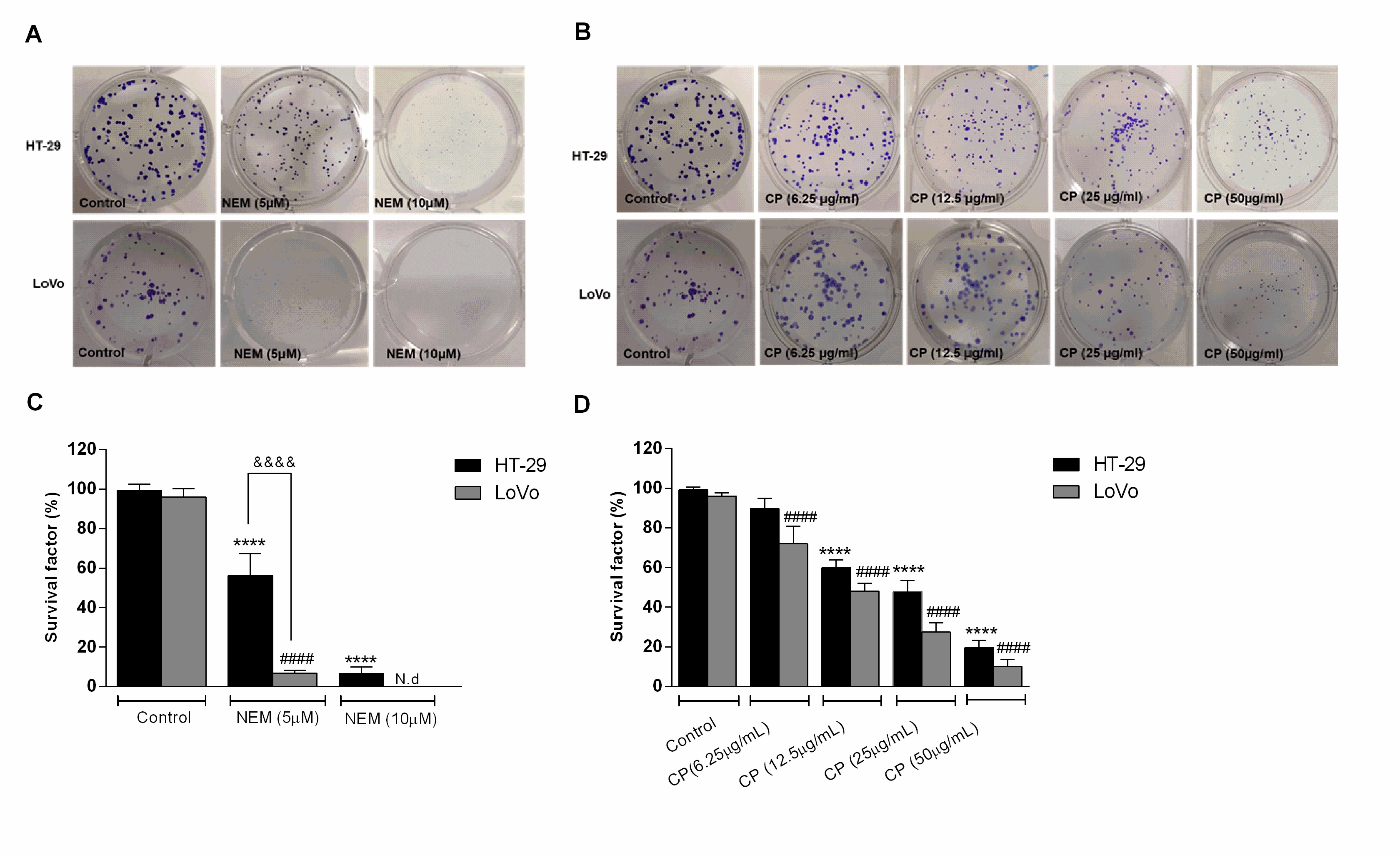 Cell cycle alteration is a critical step in the arrest of CRC progression [36]. In the present study, we observed that the antiproliferative effect of NEM and CP could be ascribable to the inhibition of cell cycle progression with an arrest in the G0/G1 phase and the induction of cell death by apoptosis. Both CP and NEM induced apoptosis in CRC cell lines in a time-dependent manner. In addition, the occurrence of apoptosis was associated with the upregulation of apoptosis-related genes TP53 and BAX, the downregulation of BCL2 and the activation of caspase-3. A previous study performed in our laboratory revealed that NEM and CP are able to induce mitochondrial dysfunction in LoVo cells [29]. The present findings were therefore in line with our previous results, thereby confirming that NEM and CP induced cell death via the mitochondrial apoptotic pathway in CRC. (Figure 3).

Migration and invasiveness of cancer cells are the main processes of tumor metastasis, which is the most frequent cause of colon cancer-associated death [6]. In order to evaluate the antimetastatic effect of NEM and CP on CRC cell lines, the wound healing and transwell migration/invasion assays were performed. Our results indicated that NEM and CP suppressed migration and invasion of both CRC cell lines. (Figure 4) 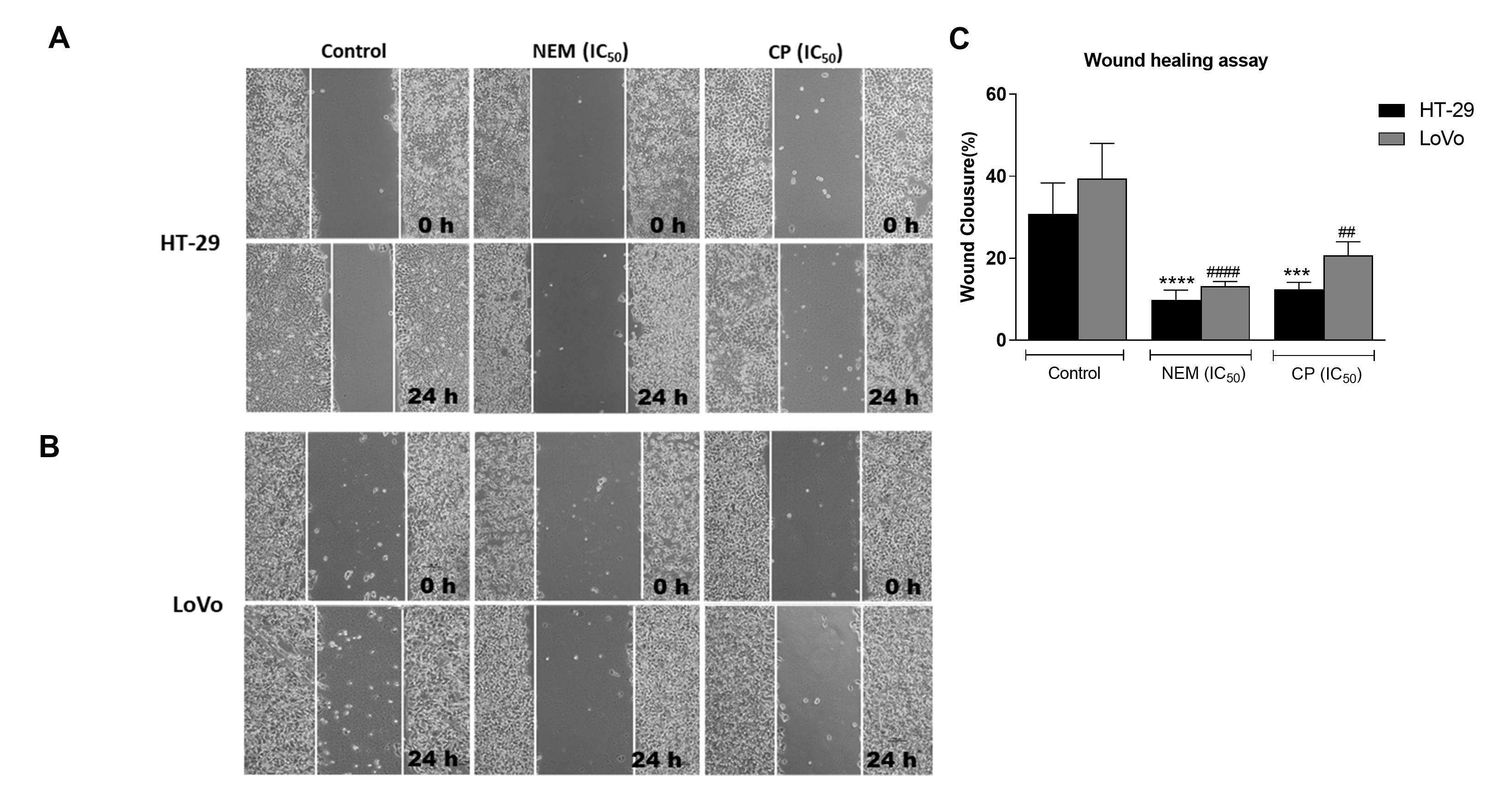 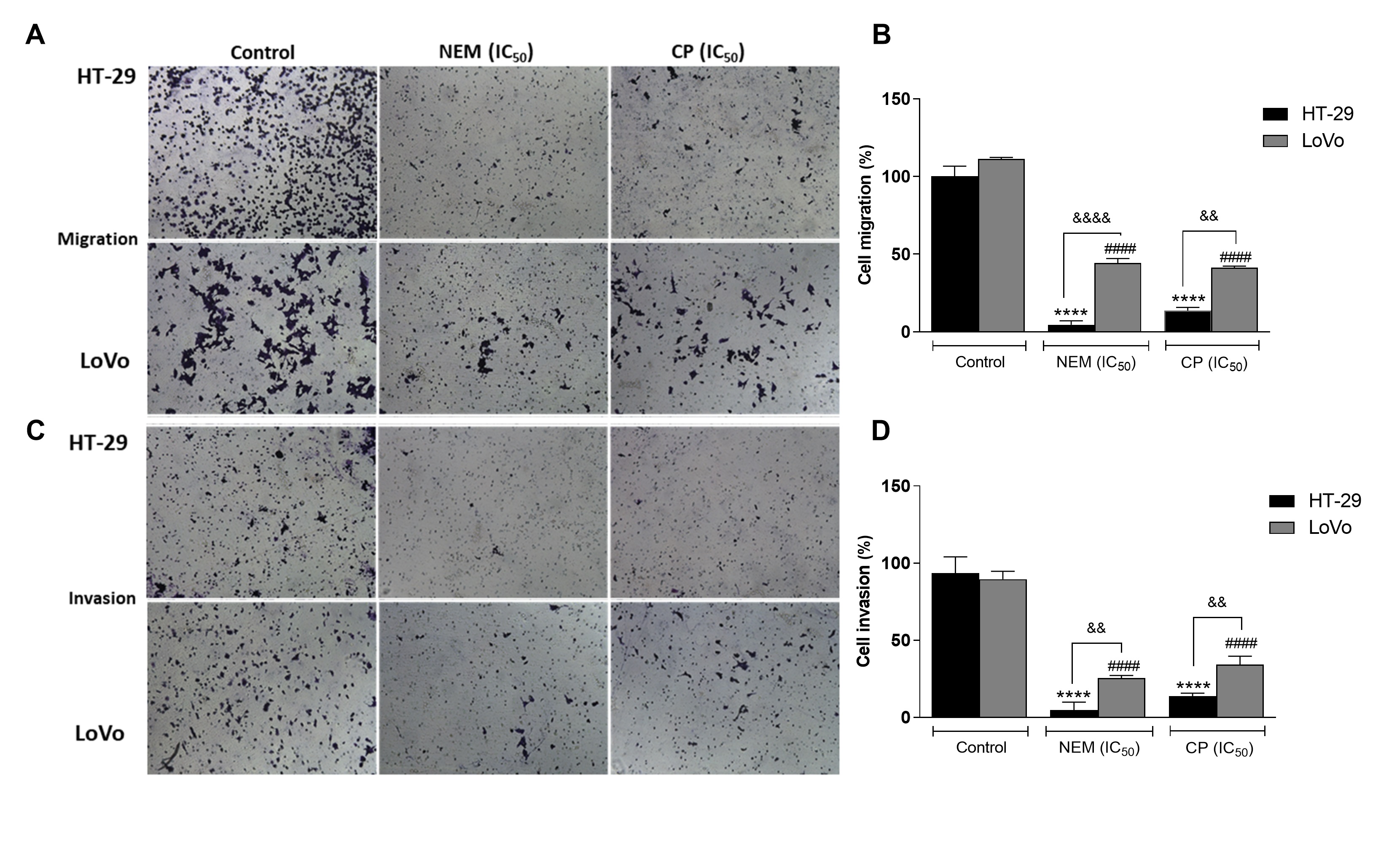 It is reported that the activity of proteolytic enzymes, such as the metalloproteinase MMP9, plays an important role in metastasis, since it is associated with the degradation of the extracellular matrix (ECM), which is involved in invasion/metastatic process [37]. We demonstrated that MMP9 activity was significantly reduced by the treatment with NEM and CP. Since it is well known that the expression of MMP-9 is correlated with angiogenesis and metastasis of CRC [38], we hypothesized that NEM and CP could affect not only the MMP9 expression in colon cancer cells, but also the expression of EMT-related molecules such as E-cadherin, B-catenin and vimentin, all involved in the migration, invasion and angiogenesis of CRC cells.In this study, we observed that HT-29 and LoVo cell lines exhibited an increase in E-cadherin protein levels and a decrease of B-catenin and vimentin expression following treatment with NEM and CP. (Figure 5) 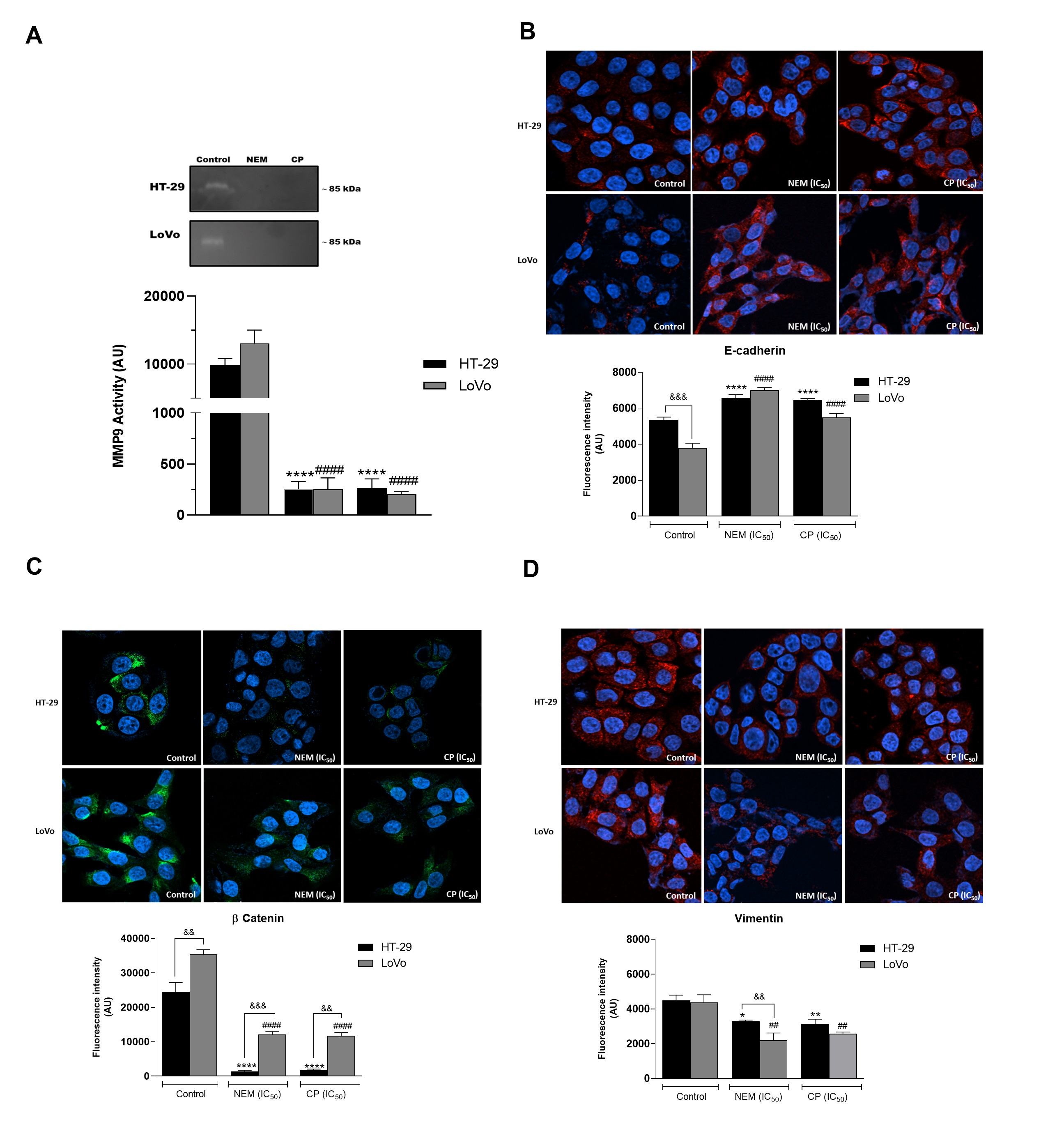 Our study demonstrated that brown Cuban propolis and its main component nemorosone inhibited cell viability and clonogenic capacity of HT-29 and LoVo cell lines, since they induced apoptosis-mediated G0/G1 phase cell cycle arrest, upregulated TP53 and BAX gene expression and downregulated that of BCL2. In addition, we demonstrated that the apoptotic intrinsic pathway was involved. Furthermore, CP and NEM suppressed cell migration and invasion of CRC cells by inhibiting of EMT-related markers expression. In conclusion, we provided new insights into the anticancer mechanism of NEM, in particular about its antimetastatic eect, thereby confirming its promising pharmacological features for CRC therapy. Further in vivo studies are needed to assess the translational relevance of our findings.

More
© Text is available under the terms and conditions of the Creative Commons Attribution (CC BY) license; additional terms may apply. By using this site, you agree to the Terms and Conditions and Privacy Policy.
Upload a video for this entry
Information
Subjects: Biochemistry & Molecular Biology
Contributors MDPI registered users' name will be linked to their SciProfiles pages. To register with us, please refer to https://encyclopedia.pub/register :
Yahima Frión-Herrera
,
Sara De Martin
View Times: 620
Revisions: 6 times (View History)
Update Time: 01 Nov 2020
Table of Contents
1000/1000
Hot Most Recent