+1 point
Thank you for your contribution! You can also upload a video entry related to this topic through the link below: https://encyclopedia.pub/user/video_add?id=55
Check Note
2000/2000
The beautiful world of biosensors

The biosensors have important role in science of chemical analysis in the field of electrochemical methods. Their application in rapid detection of toxins in types, we consume in our daily lives, is particularly useful for public health. The main characteristics of evaluation of biosensors is the high sensitivity, high selectivity, the quick response and the reusability. Analysis of the real samples need additionally a method of evaluating the rate of recovery that is the fractional difference of signal between real and simulated samples. The advantages of the use of biosensors are part of the easy construction, portability and low cost. The provision of analytical results of biosensors is similar to that of other far more expensive methods of instrumental chemical analysis.

The future of chemistry lies in innovative technologies that will change lifes of people. One of those technologies is the biosensors that in the last years had developed a lot. The question is what they are the biosensors and the answer finded in analytical chemistry. The definition  speaks about  an analytical device, used for the detection of a chemical substance, that combines a biological component with a a physicochemical detector[1][2]. 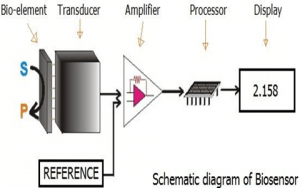 In a biosensor, the bioreceptor is designed to interact with the specific analyte of interest to produce an effect measurable by the transducer.High selectivity for the analyte among a matrix of other chemical or biological components is a key requirement of the bioreceptor. While the type of biomolecule used can vary widely, biosensors can be classified according to common types of bioreceptor interactions involving: antibody/antigen[3], enzymes/ligands, nucleic acids/DNA, cellular structures/cells, or biomimetic materials[4][5].

An immunosensor utilizes the very specific binding affinity of antibodies through specific compound or antigen. The specific nature of the antibody-antigen interaction is analogous to a lock and key fit in that the antigen will only bind to a specific antibody, that has the correct conformation. Binding is result of a physicochemical change that in combination with a tracer like fluorescent molecules, enzymes, or radioisotopes, can generate a signal.

In antibodies, although, exist some limitations. As in most cases the antibody binding capacity is strongly dependent on assay conditions (e.g. pH and temperature) and the antibody-antigen interaction is generally irreversible. However, it has been shown that binding can be disrupted by chaotropic reagents, organic solvents, or even ultrasonic radiation[6].

The use of antibodies as the bio-recognition component of biosensors has several drawbacks. They have high molecular weights and limited stability, contain essential disulfide bonds and are expensive to produce. In one approach to overcome these limitations, recombinant binding fragments (Fab, Fv or scFv) or specific domains (VH, VHH) of antibodies have been engineered [7]. In another approach, small protein scaffolds with favorable biophysical properties have been engineered to generate artificial families of Antigen Binding Proteins (AgBP), capable of specific binding to different target proteins while retaining the favorable properties of the parent molecule. The elements of the family that specifically bind to a given target antigen, are often selected in vitro by display of phage, ribosome, yeast or mRNA.

The artificial binding proteins has a strong stability, lack disulfide bonds and can be expressed in high yield in reducing cellular environments like the bacterial cytoplasm, contrary to antibodies and their derivatives [8][9]. They are thus especially suitable to create biosensors[10][11].

The specific binding capabilities and catalytic activity of enzymes make them popular bioreceptors. Analyte recognition is enabled through several possible mechanisms like:

2) detecting enzyme inhibition or activation by the analyte

3) monitoring modification of enzyme properties resulting from interaction with the analyte [6].

The main reasons for the common use of enzymes in biosensors are:

1) ability to catalyze a large number of reactions

2) potential to detect a group of analytes (substrates, inhibitors, and modulators of the catalytic activity)

3) suitability with several different transduction methods for detecting the analyte.

Notably, since enzymes are not consumed in reactions, the biosensor can easily be used repeatidily. The catalytic activity of enzymes also allows lower limits of detection compared to common binding techniques. However, the sensor's lifetime is limited by the stability of the enzyme.

Antibodies have a high binding constant, which stands for a nearly irreversible association once the antigen-antibody couple has formed. For certain analyte molecules like glucose affinity binding proteins exist that bind their ligand with a high specificity like an antibody. The association between analyte and receptor then is under reversible nature and next to the couple between both also their free molecules occur in a measurable concentration. In case of glucose, for instance, concanavalin A may function as affinity receptor exhibiting a binding constant [12].The use of affinity binding receptors for purposes of biosensing has been proposed by Schultz and Sims in 1979 [17] and was subsequently configured into a fluorescent assay for measuring glucose in the relevant physiological range[13]. The sensor principle has the advantage that it does not consume the analyte in a chemical reaction as occurs in enzymatic assays.

Biosensors that employ nucleic acid interactions can be referred to as genosensors. The recognition process is based on the principle of complementary base pairing, adenine: thymine and cytosine: guanine in DNA. If the target nucleic acid sequence is known, complementary sequences can be synthesized, labeled, and then immobilized on the sensor. The hybridization probes can then base pair with the target sequences, generating an optical signal. The favored transduction principle employed in this type of sensor has been optical detection [6].

It has been proposed that properly optimized integrated optical resonators can be exploited for detecting epigenetic modifications (e.g. DNA methylation, histone post-translational modifications) in body fluids from patients affected by cancer or other diseases[14]. Photonic biosensors with ultra-sensitivity are nowadays being developed at a research level to easily detect cancerous cells within the patient's urine [15].Different research projects aim to develop new portable devices that uses cheap, environmentally friendly, disposable cartridges that require only simple handling with no need of further processing, washing, or manipulation by expert technicians.

Organelles form separate compartments inside cells and usually perform function independently. Different kinds of organelles have various metabolic pathways and contain enzymes to fulfill its function. Commonly used organelles include lysosome, chloroplast and mitochondria. The spatial-temporal distribution pattern of calcium is closed related to ubiquitous signaling pathway. Mitochondria actively participate in the metabolism of calcium ions to control the function and also modulate the calcium related signaling pathways. Experiments have proved that mitochondria have the ability to respond to high calcium concentration generated in the proximity by opening the calcium channel [16]. In this way, mitochondria can be used to detect the calcium concentration in medium and the detection is very sensitive due to high spatial resolution. Another application of mitochondria is used for detection of water pollution. Detergent compounds' toxicity will damage the cell and subcellular structure including mitochondria. The detergents will cause a swelling effect which could be measured by an absorbance change. Experiment data shows the change rate is proportional to the detergent concentration, providing a high standard for detection accuracy[17].

Cells are often used in bioreceptors because they are sensitive to surrounding environment and they can respond to all kinds of stimulants. Cells tend to attach to the surface so they can be easily immobilized. Compared to organelles they remain active for longer period and the reproducibility makes them reusable. They are commonly used to detect global parameter like stress condition, toxicity and organic derivatives. They can also be used to monitor the treatment effect of drugs. One application is to use cells to determine herbicides which are main aquatic contaminant[18]. Microalgae are entrapped on a quartz microfiber and the chlorophyll fluorescence modified by herbicides is collected at the tip of an optical fiber bundle and transmitted to a fluorimeter. The algae are continuously cultured to get optimized measurement. Results show that detection limit of certain herbicide can reach sub-ppb concentration level. Some cells can also be used to monitor the microbial corrosion [19]. Pseudomonas sp. is isolated from corroded material surface and immobilized on acetylcellulose membrane. The respiration activity is determined by measuring oxygen consumption. There is linear relationship between the current generated and the concentration of sulfuric acid. The response time is related to the loading of cells and surrounding environments and can be controlled to no more than 5min.

Tissues are used for biosensor for the abundance of enzymes existed. Advantages of tissues as biosensors include the following:

There also exist some disadvantages of tissues, like the lack of specificity due to the interference of other enzymes and longer response time due to transport barrier.

2. Surface attachment of the biological element

An important part in a biosensor is to attach the biological elements (small molecules/protein/cells) to the surface of the sensor (be it metal, polymer or glass). The bound biological agent can be fixed by Layer by layer, that is the most common, depositation of alternatively charged polymer coatings[20].

Layer-by-layer (LbL) deposition is a thin film fabrication technique. The films are formed by depositing alternating layers of oppositely charged materials with wash steps in between. This can be accomplished by using various techniques such as immersion, spin, spray, electromagnetism, or fluidics[21].The first implementation of this technique is attributed to J. J. Kirkland and R. K. Iler of DuPont, who carried it out using microparticles in 1966 [22]. The method was later revitalized by the discovery of its applicability to a wide range of polyelectrolytes by Prof. Gero Decher at Johannes Gutenberg-Universität Mainz [23].

*Τhis entry has been also written in my website ikarianews.gr

More
©Text is available under the terms and conditions of the Creative Commons-Attribution ShareAlike (CC BY-SA) license; additional terms may apply. By using this site, you agree to the Terms and Conditions and Privacy Policy.
Upload a video for this entry
Information
Subjects: Electrochemistry
Contributor MDPI registered users' name will be linked to their SciProfiles pages. To register with us, please refer to https://encyclopedia.pub/register :
Stefanos Karapetis
View Times: 1128
Revisions: 4 times (View History)
Update Date: 29 Dec 2021
Table of Contents
1000/1000
Hot Most Recent