Submitted Successfully!
Thank you for your contribution! You can also upload a video entry related to this topic through the link below:
https://encyclopedia.pub/user/video_add?id=509
Check Note
2000/2000
Alzheimer's disease
Edit
Upload a video

Alzheimer's disease (AD) is a multifactorial disease and the most common neurodegenerative disorder affecting the elderly population world-wide.The used medications treat the symptoms of AD, but without any delay on the progression of the disease. Curcumin presented favorable effects on AD. In the last decade curcumin analogues and derivatives have been synthesized in an attempt to optimize the beneficial properties of curcumin and improve its absorbance and  distribution per os as a therapeutic agent.

Reviewing the bibliographical data of the last decade, information on the structures and / or chemical groups that are associated with specific action against AD, was gathered, derived from docking studies, (Q)SAR from vitro and in vivo tests. Phenolic hydroxyl groups might contribute to the anti-amyloidogenic activity. Phenyl methoxy groups seems to contribute to the suppression of Aβ42 and to the suppression of APP. Hydrophobic interactions revealed to be important. The presence of flexible moieties at the linker are crucial for the inhibition of Aβ aggregation. The inhibitory activity of derivatives is increased with the expansion of the aromatic rings. The keto-enol tautomer form offers as a new modification for the design of amyloid-binding agents.

Taking the above under consideration  innovative design  and synthesis will lead to more potent and specific curcumin analogues and derivatives against AD.

Alzheimer disease (AD) is characterized by serious loss of short-term memory and impaired cognition, followed by neurodegeneration.  It is a multifactorial disease, still under research and a lot of causes have been suggested to be correlated to the onset of AD [1].

AD is mainly characterized by the accumulation of β-amyloid (Aβ) plaques (or senile plaques) and neurofibrillary tangles (NFTs) of Tau protein, in brain [2]. Chronic brain inflammation also is a distinctive feature of AD in which the microglia, astrocytes, and  neurons extensively are thought to be strongly correlated in the inflammatory process [3][4]. Oxidative stress appears to be a major determinant of AD pathogenesis and progression [5]. In addition, lipid peroxidation and concentrations of several metalls as Fe, Cu, Al, and Hg in AD patients were found to be elevated [6].

Low levels of Acetylocholine are observed in AD patients making Acetylcholinesterase (AChE) an important therapeutic player in AD disorder. Recently the role of neocortical acetylcholine (Ach) in spatial memory has been obtained [7].

Curcumin as well as curcuminoids are of great interest to researchers because it a pleiotropic-multitarget molecule, presenting  a wide variety of bioactivities, including anti-inflammatory, antioxidant as well as anti-AD properties [8][9], inhibition activity against  AChE, butrylcholinesterase (BChE) [10][11], β-secretase (BACE-1) [12][12] and glycogen synthase kinase 3 beta (GSK3β) [13].

Curcumin presents poor absorbance, biodistribution bioavailbility per os and selectivity. Thus, its use is significantly limited. Its multi-interaction with several molecular targets, diminishes its selectivity. In the last decade researchers focused to curcumin analogues trying to optimize the beneficial properties of curcumin against AD and improve its pharmacokinetic profile. Curcumin analogues were designed and synthesized as multitarget anti-AD agents showing promising results in treatment and diagnosis [16][14][15] of AD.

The following Schemes highlight the two forms of curcumin structure and indicates the possible positions for structural modifications. 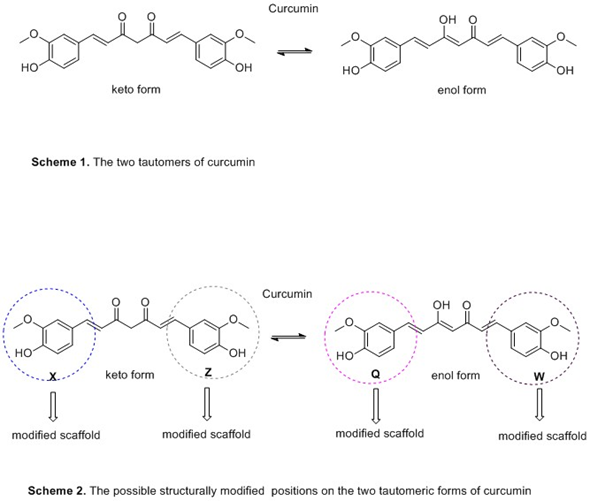 So far the design of curcumin analogues is more focused on the inhibition of Αβ-amyloid and the suppression of oxidative stress.  The attempts to design and synthesize molecules that inhibit both protein accumulation and AChE in the brain were fewer and the results very poor.

Judging the review findings, the presence of phenyl methoxy and hydroxyl groups seems to play an important role in inhibiting Αβ-amyloid accumulation. On the other hand, phenolic groups in combination with methoxyl moiety in ortho position and hydroxyl substituent are implicated to the oxidative stress suppression (Scheme 1). It seems that the styryl function and steric or electronic factors through the large aromatic structure are contributed to the anti-oxidant activity[17].(Scheme 2)

Curcumin and its derivatives due to the existence of two aromatic rings and the distance between them, could be able to favorably interact with both the quaternary and peripheral sites of AChE's catalytic site through hydrogen bonds formation. The keto-enol moiety is characterized as the best alternative modification to elevate the levels of acetyl-choline  by the design of more potent AChE inhibitors (Scheme 1) [17].(Scheme 2)

Curcumin hybrids, which combine tacrine, donepezil, rivastigmine melatonin with curcumin present a multifunctional profile, targeting many factors implicated in Alzheimer's disease. However, it should to be noticed that the permeability of the blood-brain barrier is not very successful for all the molecules of this type [17].

More
©Text is available under the terms and conditions of the Creative Commons-Attribution ShareAlike (CC BY-SA) license; additional terms may apply. By using this site, you agree to the Terms and Conditions and Privacy Policy.
Upload a video for this entry
Information
Subjects: Anatomy & Morphology ; Chemistry, Medicinal
Contributor MDPI registered users' name will be linked to their SciProfiles pages. To register with us, please refer to https://encyclopedia.pub/register :
Dimitra Hadjipavlou-Litina
View Times: 567
Revisions: 2 times (View History)
Update Time: 30 Oct 2020
Table of Contents
1000/1000
Hot Most Recent