Submitted Successfully!
Thank you for your contribution! You can also upload a video entry related to this topic through the link below:
https://encyclopedia.pub/user/video_add?id=483
Check Note
2000/2000
Intrapancreatic Parenchymal Cell Transplantation
Edit

In vivo inoculation of cells such as cancer cells and induced pluripotent stem (iPS)/embryonic stem (ES) cells into immunocompromised mice, such as nude mice, has been considered a powerful technique for evaluating these cells' potential to form solid tumors made of proliferating cells or teratomas made of various types of differentiated cells originating from three germ cell layers. Two major approaches, i.e., subcutaneous grafting and grafting under the kidney capsule, have been widely utilized for this purpose. Unfortunately, large numbers of tumor cells are required for successful inoculation, and often, failure of tumorigenesis is encountered. This is attributable to dispersion/escaping of grafted cells from the inoculation site. To avoid such cell dispersion/escaping, choosing an appropriate inoculation site from where grafted cells cannot easily disperse is important. Intrapancreatic parenchymal injection of tumorigenic cells is apparently very effective for this purpose; the grafted cells seldom escape from the injection site and are found to form solid tumors even from small numbers (~15 × 103 cells) of cells. The procedure is very simple—it requires only surgical exposure of the pancreas over the dorsal skin under anesthesia and subsequent injection of cells toward the pancreatic parenchyma under dissecting microscope-based observation using a mouthpiece-controlled glass micropipette. The inoculated cells generally grow as solid tumors 1–1.5 months after surgery. This novel technique is known as “intrapancreatic parenchymal cell transplantation (IPPCT).” Apart from the abovementioned benefit, IPPCT may be useful for those wanting to obtain large amounts of tumorigenic cells for biochemical or molecular biological analyses or for those rescuing specific cells that are difficult to cultivate in vitro.

[1][2][3]Induced pluripotent stem (iPS)/embryonic stem (ES) cells can differentiate into fully differentiated cells originating from three germ layers when subjected to differentiation-inducing conditions. Because of their pluripotency, they may be a powerful tool in cell-based therapy for treating damaged tissues in the ﬁeld of regenerative medicine, although their tumorigenic potential has remained a concern prior to their use for clinical purposes.

To test for the presence of the possibility of undifferentiated iPS/ES cells remaining in cell groups that have been induced for differentiation, the “in vivo teratoma formation assay,” based on in vivo inoculation of cells into immunocompromised mice [i.e., nude and non-obese diabetic/severe combined immunodeﬁcient (NOD/SCID) mice], has been considered an effective approach. Subcutaneous grafting and grafting under the kidney capsule have been widely used for this purpose. Inoculation of iPS/ES cells into the abovementioned sites often causes solid tumors called “teratomas,” which are comprised of various types of differentiated cells. Knowledge on whether the generated teratomas contain differentiated cells from all three germ layers is essential to deﬁne iPS/ES cell pluripotency. Therefore, the in vivo teratoma formation assay comprises at least two important aspects—assessment of cell pluripotency and evaluation of the tumorigenicity of iPS/ES cell-derived progeny.

For the in vivo teratoma formation assay, choosing sites suitable for transplantation of iPS/ES cells is important because grafted cells often disperse; this is one of the reasons for failure of solid tumor formation. Subcutaneous grafting and grafting underneath the kidney capsule have been extensively used in the past; however, these approaches are often associated with cell loss, as mentioned above, leading to failure in solid tumor formation.

The pancreas is composed of many clonally developed compartments; it includes exocrine acinar cells and endocrine islet cells and an organ that is easily accessible surgically, as it is easily exposed over the back skin after surgical dissection of the skin. We have previously demonstrated that successful gene delivery is possible when a plasmid DNA-containing solution is intraparenchymally injected using a mouthpiece-controlled glass micropipette, and, subsequently, the injected portion is subjected to in vivo electroporation using tweezer-type electrodes [1]. At that time, we observed that the injected solution (including the vital dye) remained at the injection site. This indicates that the cells or cell aggregates inoculated within the pancreatic compartment might not spread easily beyond the compartment. In fact, proliferating tumor cells (including iPS cells) were inoculated into the pancreatic parenchyma of nude mice under observation using a dissecting microscope to test whether those cells could grow as solid tumors in vivo. Consequently, appearance of solid tumors was confirmed 1–1.5 months after inoculation in the pancreas. This unique approach for inducing in vivo tumor formation is known as “intrapancreatic parenchymal cell transplantation (IPPCT)” [2].

The procedure for IPPCT has been schematically illustrated in Figure 1A and Figure 1B. In brief, the exposed pancreas of an anesthetized nude mouse was subjected to cell transplantation under a dissecting microscope (Figure 1B-a) using a mouthpiece-controlled micropipette (Figure 1B-b). A blue dye-containing solution (1-2 mL) was injected twice at each site of the pancreas (Figure 1B-c–e); this was easily visualized by the color change from pale white before injection (Figure 1B-c) to blue after the ﬁrst (Figure 1B-d, arrow) and second injections (Figure 1B-e, arrowheads). The arrows in Figure 1B-f indicate the three sites that were successfully injected. Of note, the injected solution did not spread outside the injection site (Figure 1B-d–f), suggesting that the transplanted cells were conﬁned within several compartments of the pancreas and did not spread outside from the site.

Figure 1. (A) Outline of intrapancreatic parenchymal cell transplantation (IPPCT) shown schematically. (a–c) Sucking ~3 μL of the solution is done by an injection micropipett connected to the mouthpiece; (i) under a dissecting microscope. (d) The spleen (Sp) and pancreas (Pan) are pulled out after making a small incision on the left dorsal skin of an anesthetized mouse. (e–g) Approximately 1 μL of the solution is injected by inserting the micropipette into the pancreatic parenchyma. (h) Performing a total of three injections at different portions of each pancreas; (B) Photographs showing the actual IPPCT procedure. (a) Injection towards pancreas under a dissecting microscope. (b) Injection micropipette used. (c–e) The process of IPPCT (before injection c, after the 1st injection d, and after the 2nd injection e). (f) The photograph of a pancreas after the 3rd injection. Sp, spleen; Pan, pancreas. Bar = 4 mm. F9 mouse teratocarcinoma cells are nullipotent cells derived from multipotent teratocarcinoma cells. When these cells are transfected with fluorescent reporter genes, green ﬂuorescence is discernible on these cells (Figure 2-a-d). These cells were subjected to IPPCT, and 1.5 months later, the grafted nude mice showed formation of solid tumors sized ~1.5–2 cm3 (Figure 2-e,f). Cryostat sectioning demonstrated that these tumors exhibited homogeneous and undifferentiated cell populations (Figure 2-i), reﬂecting the nullipotency of F9 cells themselves and the expression of green ﬂuorescence (Figure 2-j).

When human pancreatic carcinoma cells SUIT-2 were used in IPPCT, the inoculated mice exhibited distinct solid tumors in their pancreas (Figure 2-k,l, arrows) 1.5 months after the inoculation. Histological analysis demonstrated that these tumors were composed of homogeneous cell populations and were surrounded by normal pancreatic cells (arrows in Figure 2-m).

IPPCT using human iPS cells resulted in generation of solid tumors called teratomas sized ~1 cm3 in the pancreas of nude mice (Figure 3-a,b). In this case, there were no appreciable teratomas in the other major organs such as the kidney, heart, intestine, lung, and spleen, suggesting almost no sign for metastasis. Histological analysis demonstrated that these tumors were composed of different tissues/cells originating from three germ layers (Figure 3-c-g). Primary cultivation of the resulting solid teratomas demonstrated the presence of various types of differentiated cells, such as migratory ﬁbroblastic cells (Figure 3-h), amorphous cells (Figure 3-i, arrow), and cuboidal cells such as parietal endodermal cells (Figure 3-j), suggesting that these cells had been derived from teratomas. 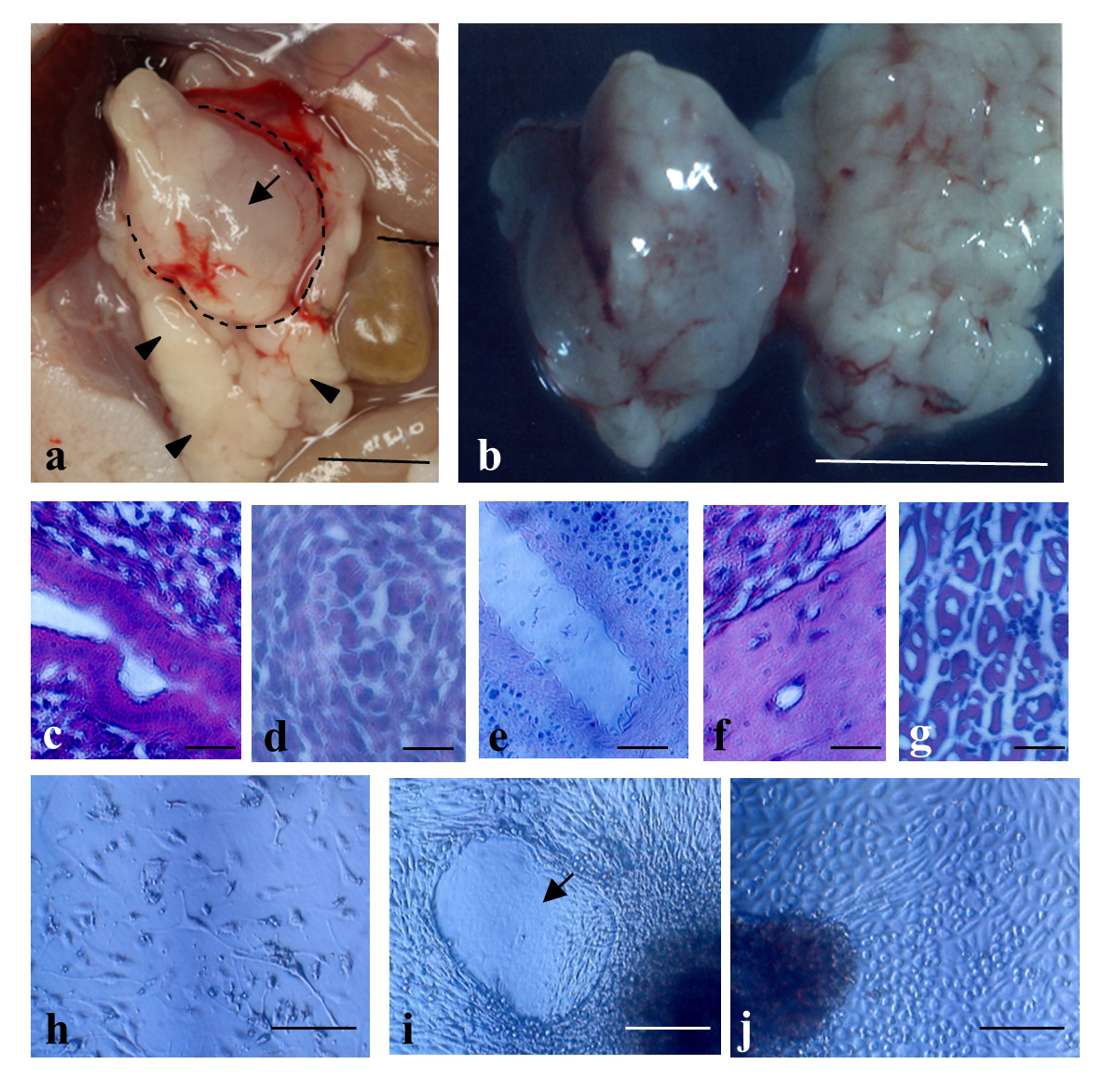