Submitted Successfully!
Thank you for your contribution! You can also upload a video entry related to this topic through the link below:
https://encyclopedia.pub/user/video_add?id=4549
Check Note
2000/2000
Connexins in Cancer
Edit
Upload a video
This entry is adapted from 10.3390/biom10121654

The expression, localization, and function of connexins, the protein subunits that comprise gap junctions, are often altered in cancer. In addition to cell–cell coupling through gap junction channels, connexins also form hemichannels that allow communication between the cell and the extracellular space and perform non-junctional intracellular activities. Historically, connexins have been considered tumor suppressors; however, they can also serve tumor-promoting functions in some contexts. Here, we review the literature surrounding connexins in cancer cells in terms of specific connexin functions and propose that connexins function upstream of most, if not all, of the hallmarks of cancer. The development of advanced connexin targeting approaches remains an opportunity for the field to further interrogate the role of connexins in cancer phenotypes, particularly through the use of in vivo models. More specific modulators of connexin function will both help elucidate the functions of connexins in cancer and advance connexin-specific therapies in the clinic.

Communication between cells is essential for normal tissues to maintain the ability to grow and respond to their environment. However, this process is frequently altered in cancer cells. Over 50 years ago, Loewenstein and Kanno observed that liver cancer cells displayed a lack of cell–cell communication [1], and further studies supported this observation in other tumor types. This led to the long-standing historical dogma that connexins, the proteins that make up gap junctions (GJs), are functionally tumor suppressive. Over time, additional evidence has suggested a more complex system where connexins serve multiple cellular functions and individual connexins can act as both tumor promoters and tumor suppressors depending on context. In this review, we discuss the mechanisms—insofar as they are known—by which the connexin family of GJ proteins mediates the key phenotypes of cancer as laid out by Hanahan and Weinberg [2], including roles in more recently appreciated cancer phenotypes such as immune evasion and metabolic reprogramming.

Over the past 60 years, the field has advanced from the observation that cancer cells often lose communication and metabolic coupling to an understanding of many of the molecular and functional mechanisms underlying the role of connexins in cancer (Figures 1 and 2). As our knowledge continues to expand, it becomes clear that, despite the variety of connexin proteins and functions, many of the roles executed by connexins in cancer cells are tightly interconnected. The transfer and uptake/release of small molecules including ATP and NAD+ are upstream of most—if not all—cancer phenotypes, supporting the hypothesis that altered connexin activity may be a unifying hallmark of cancer [3]. Remaining questions include the identity of essential molecules being transferred, the functional effects of connexin mislocalization, and the differential selectivity of different combinations of connexins. There is also a lot still to be learned about non-junctional roles for connexin proteins in cancer.

Figure 1. Cancers in which specific connexin functions have been described to be pro-tumorigenic. Schematic showing examples of the cancer types in which pro-tumorigenic properties have been attributed to a specific connexin function, whether gap junction intercellular communication (GJIC), connexin hemichannels, or a non-junctional function. Bold red text indicates strong evidence from many cancer types tying the connexin function to the corresponding cancer hallmark, with red text indicating a less robust link and black text indicating emerging evidence. Where mechanistic studies in cancer cells are not available, certain non-transformed cell populations are indicated. References for the indicated cancers are provided in the text. Figure illustrations generated using BioRender.com. 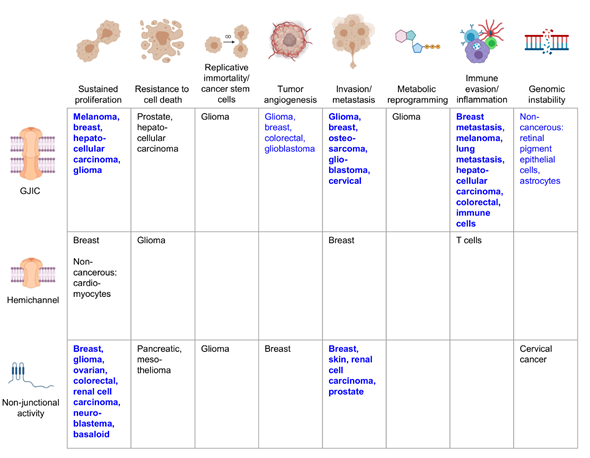 Figure 2. Cancers in which specific connexin functions have been described to be tumor suppressive. Schematic showing examples of the cancer types in which tumor suppressive properties have been attributed to a specific connexin function, whether gap junction intercellular communication (GJIC), connexin hemichannels, or a non-junctional function. Bold blue text indicates strong evidence from many cancer types tying the connexin function to the corresponding cancer hallmark, with blue text indicating a less robust link and black text indicating emerging evidence. Where mechanistic studies in cancer cells are not available, certain non-transformed cell populations are indicated. References for the indicated cancers are provided in the text. Figure illustrations generated using BioRender.com.

When evaluating connexin function in cancer, it is important to note that the role of a connexin in a given cancer cell will depend on the context, including the cell and tumor type, the connexin isoforms expressed in the cell, and the specific microenvironment of the cell (including the concentration of extracellular molecules and the surrounding cells available for GJ coupling), as well as the mutational and expression profiles of the cell. While mutations in connexin genes typically occur with only a low frequency in cancers [4], these alterations in connexin sequence likely affect function in some cases. The importance of GJIC between cancer cells (homocellular communication) may be very different from the necessity of communication between a tumor cell and a non-transformed cell in the microenvironment (heterocellular communication). Differences in context likely underlie the many contradicting reports of connexin functions in cancer cells. Furthermore, relevant to the discussion presented here, multiple cancer phenotypes likely lie downstream of one connexin function, for example, the multiple roles of ATP, NAD+, and ROS transfer through GJs and uptake and release by hemichannels.

It has been challenging to determine whether alterations in connexin expression observed in tumor tissues have a direct or indirect effect on cancer cell phenotypes. The use of knockdown/knockout approaches has facilitated an understanding of these effects in animal models and cultured cells, but these techniques still do not shed light on the mechanisms underlying the effect of alterations in connexin expression. Furthermore, cells may compensate for removal of one connexin by upregulating another family member, further complicating the situation. One challenge of the field is the small number of truly specific inhibitors that target a given function of a given connexin. The development of better inhibitors is complicated by the high degree of similarly among connexins and the complex interplay among connexin functions. Non-specific inhibitors of GJs, including CBX, oleamide, mefloquine, octanol, 18-GA, and others [5], have been used and have contributed valuable knowledge to the field. However, these types of inhibitors are not ideal due to their off-target or non-specific effects and their lack of selectivity for specific connexin proteins and specific connexin functions [5]. Work on Cx43 has been dramatically aided by the development of the Cx43 mimetic peptides that target one or more connexin function, although these peptides also modulate the functions of other connexins to varying degrees [6]. While the most mechanistic work has been performed for Cx43, it is clear that other connexins also have roles in cancer phenotypes. For other connexins, the only options to isolate the role of GJ vs. hemichannel vs. non-channel functions remain either nonspecific inhibitors or mutation of the connexin. Connexin point mutations bring about their own set of challenges, including requiring either altering the levels of protein expressed via overexpression or genome editing, as well as a detailed understanding of the structure–function relationships within the molecule. However, connexin point mutations may still affect more than one connexin function concurrently (for example, GJ and hemichannel activity or protein–protein binding and channel function), confounding the interpretation of results.

Although the existence of connexin hemichannels has become more accepted in the field, their study continues to be complicated by the presence of pannexin hemichannels, which are sensitive to many of the same inhibitors as connexin channels [6]. The development of approaches to target the functions of connexins other than Cx43 without disrupting pannexin function will greatly aid our understanding of connexins in cancer and provides an immense opportunity to gain insight into the importance of connexin activity in both cancer and normal physiology. These types of inhibitors will also have a high therapeutic potential to treat the multitude of pathological conditions, including cancer, in which connexins are involved.

More
© Text is available under the terms and conditions of the Creative Commons Attribution (CC BY) license; additional terms may apply. By using this site, you agree to the Terms and Conditions and Privacy Policy.
Upload a video for this entry
Information
Subjects: Biochemistry & Molecular Biology ; Oncology ; Cell Biology
Contributor MDPI registered users' name will be linked to their SciProfiles pages. To register with us, please refer to https://encyclopedia.pub/register :
Erin Mulkearns-Hubert
View Times: 195
Revisions: 4 times (View History)
Update Time: 24 Dec 2020
Table of Contents
1000/1000
Hot Most Recent