Submitted Successfully!
Thank you for your contribution! You can also upload a video entry related to this topic through the link below:
https://encyclopedia.pub/user/video_add?id=439
Check Note
2000/2000
Cyclodextrins Modified/Coated Metal–Organic Frameworks
Edit
Upload a video
This entry is adapted from 10.3390/ma13061273

CDs-modified MOFs provide an opportunity of combining diverse functions for the application in biomedicines such as improving biocompatibility and solubility of delivery systems, introducing particular functional groups for recognizing specific targeting receptors, escaping immune system, delivering various drugs and drug models, release drugs according to external stimuli as well as delaying the release for different requirements of medical treatments[1][2]. Different roles of CDs and MOFs in the hybrid materials (Scheme 1) contribute a lot to improving the functions of traditional bioactive materials, as well as drug delivery and release systems. The introduction of CDs can improve the biocompatibility and solubility of unmodified MOFs in H2O, and CDs-modified MOFs is able to be used for specific targeting, due to the possession of recognition ability on the outer surface of MOFs and the escape from the immune system. For example, in order to evade the immune system and to add extra molecular recognition ability, tetraethylene glycol, PEG and mannose moieties can functionalize CDs first, and then modified CDs could further combine with MOFs, such as loading CDs on the outer surface of MIL-100(Fe) via the phosphate–FeIII bonding[2][3] and leading to a significant decrease of macrophage uptake (Figure 1). Particularly, the tetraethylene glycol-bearing β-CDs phosphate (H1) modified MOFs exhibit remarkably enhanced binding affinity towards the specific mannose receptor, i.e., Concanavalin A, due to the possession of mannose moieties, reduced macrophage internalization and multivalent effects based on the scaffold of β-CDs.

Figure 1. Observations by confocal microscopy to evaluate the interaction between J774 macrophase and CDs-coated MOFs, indicating that hybrid materials have penetrated into macrophase and affected its functions. Cells were stained in green with calcein, the cell nucleus is in black, and the rhodamine-B-labeled hybrid materials exhibited red signals. The differences of images (a,b,c) of the same cells caused by three different heights above the glass slide including 2.3, 4.9 and 7.6 µm, respectively. Scale bar = 5 µm. Reproduced from Reference[2] with permission from the Nature Publishing Group, copyright 2015.

CDs-modified MOFs can be used for delivering and releasing drugs. In the first step, CDs mainly perform as a cap to stop the release of loaded drugs, for example, tetraethylene glycol functionalized β-CDs (H2) can further be coated on the outer surface of DOX-loaded MIL-100(Fe) without affecting the payload of the nanocomposite[3]. In the second step, removing CDs from hybrid materials will lead to the release of loaded drugs, and different CDs coated on the surface of inorganic materials have different performances, for example, the effect of releasing the tritium-labeled antiretroviral drug, AZT-PT by CDs-coated MOFs is estimated by scintillation counting[4], and reveals that polymeric β-CDs (such as H3) modified MOFs afford a better control of drug release over monomeric β-CDs (H4 and H5) coated ones, due to the presence of nonmodified CDs moieties in the structure and interacting with drugs. Although it is known that AZT has interactions with native and primary face-modified β-CDs, polymeric β-CDs-modified MOFs can increase drug retention in 13%.

Particularly, the external stimuli-responsive release of drugs can be achieved by the employment of CDs-coated MOFs. For example, external stimuli-responsive molecules such as azobenzene can be introduced into the hybrid materials such as the water-stable, biocompatible and degradable Zr-MOF, then act as the switch tool to associate/disassociate with coated β-CDs in accordance with different light irradiation conditions and, finally, control the performance of thus obtained integrated hybrid organic–inorganic materials, which have already stored drug models such as rhodamine B[5]. Additionally, the “gatekeeper”, β-CDs, can also be removed to release cargos inside the UiO-68-azo-bearing Zr-MOFs upon the addition of competitive guests, e.g., the drug for Parkinson’s disease, amantadine[5]. Thus, this kind of β-CDs-coated Zr-MOFs might be used as a platform for on-command drug delivery systems (Figure 2).

Figure 2. (a) Schematic illustration of the controlled release system upon the addition of a competitive guest, amantadine, as well as exposure under UV irradiation. The trans-azobenzene and its cis-isomer are colored in green and cyan, respectively. (b) Changing points in the release profile of CDs capped UiO-68-azo-bearing Zr-MOFs. Reproduced from Reference[5] with permission from the American Association for the Advancement of Science, copyright 2016.

The employment of CDs is a very good control strategy for tuning MOFs to apply in the catalysis area. For example, with the assistance of host–guest complex between β-CDs and L1 as assembly agents, UiO-66-NH2 loaded polypropylene performs well in catalytic degradation of dimethyl 4-nitrophenyl phosphate, a chemical warfare agent simulant, with a half-life of less than 5 min[8].

Additionally, the CDs-modified MOFs hybrid materials also reveal good catalytic behavior, due to the possession of the large surface area of MOFs as well as the synergistic effect between MOFs and CDs, for example, the nanocomposite, MOF-235/β-CDs has catalytic activity for the hydrogen peroxide-luminol system, and can enhance the chemiluminescence response with more than 30-fold in comparison with that of hydrogen peroxide-luminol system (Figure 4)[9]. Thus, the catalytical performance of MOF-235/β-CDs could be applied to sensitively detect H2O2 and glucose. It is further found that the limits of detection (LOD) for H2O2 and glucose in serum samples by MOF-235/β-CDs hybrid materials are 0.5 and 1.0 × 10−9 mol L−1, respectively. 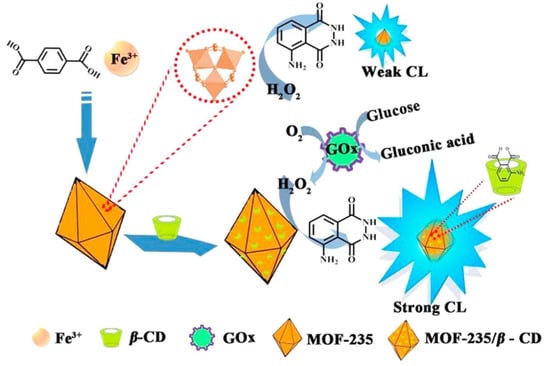 Figure 4. Proposed chemiluminescence (CL) mechanism of the luminol-H2O2 system by MOF-235/β-CDs hybrid materials. MOF-235 is generated by the coordination reaction between FeIII and terephthalic acid (top left), and further functionalized with β-CD. The intermediate of luminol is supposed to be hosted by the cavity of β-CD (right) during the oxidation reaction of glucose with glucose oxidase (GOx). Reproduced from Reference[9] with permission from Elsevier B.V. Copyright 2018.

Except for the above example for applying to detection fields, CDs-modified MOFs could further be used for extraction and separation. For example, the hybrid material M-MOF/β-CDs could perform as the solid phase extraction material and extract prochloraz and triazole fungicides from tomato and lettuce vegetables. As determined by HPLC–MS/MS, the LOD for those fungicides are 0.25–1.0 × 10−6 g L−1 at a signal-to-noise ratio of three with spiked recoveries of 74.13%–119.83%[10], indicating that analyte detection was not affected by differences in the standard curve diluent and experimental sample matrix.

More
© Text is available under the terms and conditions of the Creative Commons Attribution (CC BY) license; additional terms may apply. By using this site, you agree to the Terms and Conditions and Privacy Policy.
Upload a video for this entry
Information
Subjects: Others
Contributor MDPI registered users' name will be linked to their SciProfiles pages. To register with us, please refer to https://encyclopedia.pub/register :
Huacheng Zhang
View Times: 869
Revisions: 2 times (View History)
Update Time: 27 Oct 2020
Table of Contents
1000/1000
Hot Most Recent