Submitted Successfully!
Thank you for your contribution! You can also upload a video entry related to this topic through the link below:
https://encyclopedia.pub/user/video_add?id=38
Check Note
2000/2000
Spiking Neural Networks
Edit
Upload a video

Spiking neural networks (SNNs) are artificial neural network models that more closely mimic natural neural networks. In addition to neuronal and synaptic state, SNNs also incorporate the concept of time into their operating model. The idea is that neurons in the SNN do not fire at each propagation cycle (as it happens with typical multi-layer perceptron networks), but rather fire only when a membrane potential – an intrinsic quality of the neuron related to its membrane electrical charge – reaches a specific value. When a neuron fires, it generates a signal which travels to other neurons which, in turn, increase or decrease their potentials in accordance with this signal (ref).

A typical spiking neuron model consists of dendrites, which simulate the input level of the network, which collects signals from other neurons and transmits them to the next level, which is called Soma. The soma is the process level at which when the input signal passes a specific threshold, an output signal is generated. The output signal is taken from the output level called the axon, which delivers the signal (short electrical pulses called action potentials or spike train) to be transferred to other neurons. Α spike train is a sequence of stereotyped events generated at regular or irregular intervals [1]. 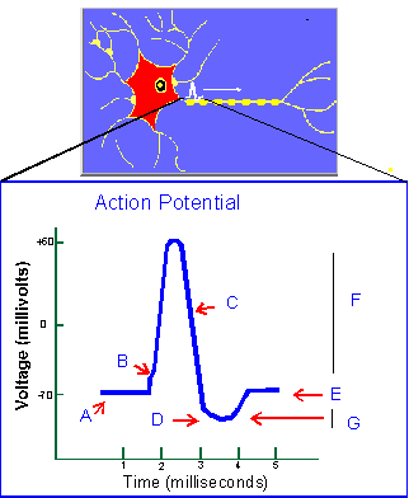 Typically, the spikes have an amplitude of about100 mV and a duration of 1-2 ms. Although the same elements exist in a linear perceptron, the main difference between a linear perceptron and a spiking model is the action potential generated during the stimulation time [2].

Furthermore, the activation function used in spiking models is a differential equation that tries to model the dynamic properties of a biological neuron in terms of spikes. The form of the spike does not carry any information, and what is important is the number and the timing of spikes [3]. 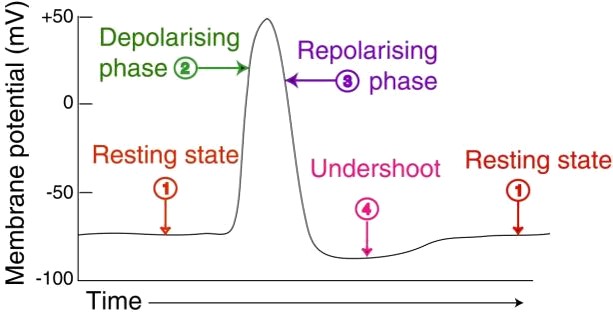 The shortest distance between two spikes defines the absolute refractory period of the neuron that is followed by a phase of relative refractoriness where it is difficult to generate a spike [4].

Several spiking models have been proposed in the last years aiming to model different neurodynamic properties of neurons. Among these models, we could mention the well-known integrate-and-fire model, resonate-and-fire and Hodgkin-Huxley model [5].

Bio-inspired machine learning (like SNNs) and bio-inspired optimization algorithms are recognized in artificial intelligence to address optimal solutions of complex problems in information science and engineering [6][7][8][9]. However, cybersecurity problems are usually nonlinear and restricted to multiple nonlinear constraints that propose many problems such as time requirements and high dimensionality to find an optimal solution[10][11][12][13][14]. To tackle these problems, recent trends have tended to apply bio-inspired machine learning and bio-inspired optimization algorithms in hybrid frameworks that represent a promising approach for solving complex cybersecurity problems[15][16][17][18].

More
©Text is available under the terms and conditions of the Creative Commons-Attribution ShareAlike (CC BY-SA) license; additional terms may apply. By using this site, you agree to the Terms and Conditions and Privacy Policy.
Upload a video for this entry
Information
Subjects: Computer Science, Artificial Intelligence
Contributor MDPI registered users' name will be linked to their SciProfiles pages. To register with us, please refer to https://encyclopedia.pub/register :
Konstantinos Demertzis
View Times: 1499
Revisions: 2 times (View History)
Update Time: 13 Oct 2021
Table of Contents
1000/1000
Hot Most Recent