+1 point
Thank you for your contribution! You can also upload a video entry related to this topic through the link below: https://encyclopedia.pub/user/video_add?id=37826
Check Note
2000/2000
Protein Film Voltammetry

Edit
Upload a video
The content is sourced from: https://handwiki.org/wiki/Biology:Protein_film_voltammetry

In electrochemistry, protein film voltammetry (or protein film electrochemistry, or direct electrochemistry of proteins) is a technique for examining the behavior of proteins immobilized (either adsorbed or covalently attached) on an electrode. The technique is applicable to proteins and enzymes that engage in electron transfer reactions and it is part of the methods available to study enzyme kinetics. Provided that it makes suitable contact with the electrode surface (electron transfer between the electrode and the protein is direct) and provided that it is not denatured, the protein can be fruitfully interrogated by monitoring current as a function of electrode potential and other experimental parameters. Various electrode materials can be used. Special electrode designs are required to address membrane-bound proteins.

Small redox proteins such as cytochromes and ferredoxins can be investigated on condition that their electroactive coverage (the amount of protein undergoing direct electron transfer) is large enough (in practice, greater than a fraction of pmol/cm2).

Electrochemical data obtained with small proteins can be used to measure the redox potentials of the protein's redox sites,[1] the rate of electron transfer between the protein and the electrode,[2] or the rates of chemical reactions (such as protonations) that are coupled to electron transfer.[3]

1.1. Interpretation of the Peak Current and Peak Area 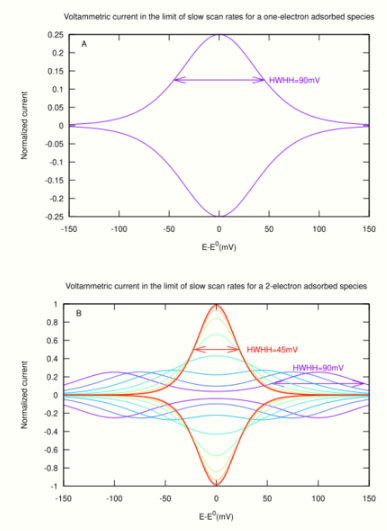 Fig 1. Voltammetric signals for a one-electron (A) or two-electron (B) redox species adsorbed onto an electrode in the limit of slow scan rate. The current plotted here is normalized by [math]\displaystyle{ F^2\nu A\Gamma/RT }[/math], implying that the measured current increases in proportion to scan rate ([math]\displaystyle{ \nu }[/math]). https://handwiki.org/wiki/index.php?curid=2069956 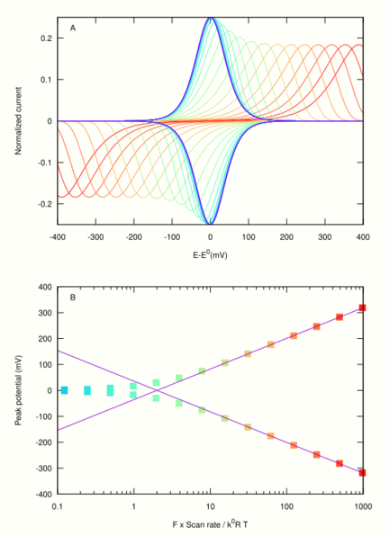 In a cyclic voltammetry experiment carried out with an adsorbed redox protein, the oxidation and reduction of each redox site shows as a pair of positive and negative peaks. Since all the sample is oxidised or reduced during the potential sweep, the peak current and peak area should be proportional to scan rate (observing that the peak current is proportional to scan rate proves that the redox species that gives the peak is actually immobilised).[1] The same is true for experiments performed with non-biological redox molecules adsorbed onto electrodes. The theory was mainly developed by the French electrochemist Etienne Laviron in the 1980s[2],[4],.[5]

Since both this faradaic current (which results from the oxidation/reduction of the adsorbed molecule) and the capacitive current (which results from electrode charging) increase in proportion to scan rate, the peaks should remain visible when the scan rate is increased. In contrast, when the redox analyte is in solution and diffuses to/from the electrode, the peak current is proportional to the square root of the scan rate (see: Randles–Sevcik equation).

At slow scan rates there should be no separation between the oxidative and reductive peaks.

Coupled reactions are reactions whose rate or equilibrium constant is not the same for the oxidized and reduced forms of the species that is being investigated. For example, reduction should favour protonation ([math]\displaystyle{ pK_a^{\rm ox}\lt pK_a^{\rm red} }[/math]): the protonation reaction is coupled to the reduction at [math]\displaystyle{ pK_a^{\rm ox}\lt pH\lt pK_a^{\rm red} }[/math]. The binding of a small molecule (other than the proton) may also be coupled to a redox reaction.

In studies of enzymes, the current results from the catalytic oxydation or reduction of the enzyme's substrate.

The electroactive coverage of large redox enzymes (such as laccase, hydrogenase etc.) is often too low to detect any signal in the absence of substrate, but the electrochemical signal is amplified by catalysis: indeed, the catalytic current is proportional to turnover rate times electroactive coverage. The effect of varying the electrode potential, the pH or the concentration of substrates and inhibitors etc. can be examined to learn about various steps in the catalytic mechanism.[6]

2.1. Interpretation of the Value of the Catalytic Current

The enzyme is often immobilized on a rotating disk working electrode (RDE) that is spun quickly to prevent the depletion of the substrate near the electrode. In that case, mass transport of substrate towards the electrode where the enzyme is adsorbed may not be influential.

Under very oxidising or very reducing conditions, the steady-state catalytic current sometimes tends to a limiting value (a plateau) which (still provided there is no mass transport limitation) relates to the activity of the fully oxidised or fully reduced enzyme, respectively. If interfacial electron transfer is slow and if there is a distribution of electron transfer rates (resulting from a distribution of orientations of the enzymes molecules on the electrode), the current keeps increasing linearly with potential instead of reaching a plateau; in that case the limiting slope is proportional to the turnover rate of the fully oxidised or fully reduced enzyme.[6]

The change in steady-state current against potential is often complex (e.g. not merely sigmoidal).[10]

Another level of complexity comes from the existence of slow redox-driven reactions that may change the activity of the enzyme and make the response depart from steady-state.[11] Here, slow means that the time scale of the (in)activation is similar to the voltammetric time scale[8] [math]\displaystyle{ \tau = RT/F\nu }[/math]. If a RDE is used, these slow (in)activations are detected by a hysteresis in the catalytic voltammogram that is not due to mass-transport. The hysteresis may disappear at very fast scan rates (if the inactivation has no time to proceed) or at very slow scan rates (if the (in)activation reaction reaches a steady-state).[12]

Conventional voltammetry offers a limited picture of the enzyme-electrode interface and on the structure of the species involved in the reaction. Complementing standard electrochemistry with other methods can provide a more complete picture of catalysis.[13][14][15]

More
©Text is available under the terms and conditions of the Creative Commons-Attribution ShareAlike (CC BY-SA) license; additional terms may apply. By using this site, you agree to the Terms and Conditions and Privacy Policy.
Upload a video for this entry
Information
Subjects: Physics, Particles & Fields
Contributor MDPI registered users' name will be linked to their SciProfiles pages. To register with us, please refer to https://encyclopedia.pub/register :
HandWiki
View Times: 52
Entry Collection: HandWiki
Revision: 1 time (View History)
Update Date: 02 Dec 2022
Table of Contents
1000/1000
Hot Most Recent