+1 point
Thank you for your contribution! You can also upload a video entry related to this topic through the link below: https://encyclopedia.pub/user/video_add?id=37812
Check Note
2000/2000
Equinox (Celestial Coordinates)

Edit
Upload a video
The content is sourced from: https://handwiki.org/wiki/Astronomy:Equinox_(celestial_coordinates)

In astronomy, an equinox is either of two places on the celestial sphere at which the ecliptic intersects the celestial equator. Although there are two intersections of the ecliptic with the celestial equator, by convention, the equinox associated with the Sun's ascending node is used as the origin of celestial coordinate systems and referred to simply as "the equinox". In contrast to the common usage of spring/vernal and autumnal equinoxes, the celestial coordinate system equinox is a direction in space rather than a moment in time. In a cycle of about 25,800 years, the equinox moves westward with respect to the celestial sphere because of perturbing forces; therefore, in order to define a coordinate system, it is necessary to specify the date for which the equinox is chosen. This date should not be confused with the epoch. Astronomical objects show real movements such as orbital and proper motions, and the epoch defines the date for which the position of an object applies. Therefore, a complete specification of the coordinates for an astronomical object requires both the date of the equinox and of the epoch. The currently used standard equinox and epoch is J2000.0, which is January 1, 2000 at 12:00 TT. The prefix "J" indicates that it is a Julian epoch. The previous standard equinox and epoch was B1950.0, with the prefix "B" indicating it was a Besselian epoch. Before 1984 Besselian equinoxes and epochs were used. Since that time Julian equinoxes and epochs have been used.

1. Motion of the Equinox 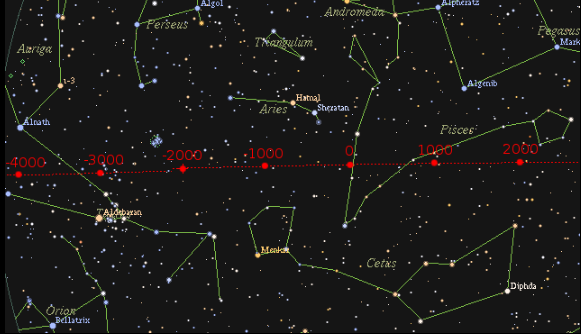 The precession of the equinox. https://handwiki.org/wiki/index.php?curid=1445257

The equinox moves, in the sense that as time progresses it is in a different location with respect to the distant stars. Consequently, star catalogs over the years, even over the course of a few decades, will list different ephemerides.[1] This is due to precession and nutation, both of which can be modeled, as well as other minor perturbing forces which can only be determined by observation and are thus tabulated in astronomical almanacs.

Precession of the equinox was first noted by Hipparchus in 129 BC, when noting the location of Spica with respect to the equinox and comparing it to the location observed by Timocharis in 273 BC.[2] It is a long term motion with a period of 25,800 years.

Nutation is the oscillation of the ecliptic plane. It was first observed by James Bradley as a variation in the declination of stars. Because he did not have an accurate enough clock, Bradley was unaware of the effect of nutation on the motion of the equinox along the celestial equator, although that is in the present day the more significant aspect of nutation.[3] The period of oscillation of the nutation is 18.6 years.

A Besselian epoch, named after German mathematician and astronomer Friedrich Bessel (1784–1846), is an epoch that is based on a Besselian year of 365.242198781 days, which is a tropical year measured at the point where the Sun's longitude is exactly 280°. Since 1984, Besselian equinoxes and epochs have been superseded by Julian equinoxes and epochs. The current standard equinox and epoch is J2000.0, which is a Julian epoch.

Besselian epochs are calculated according to:

The previous standard equinox and epoch were B1950.0, a Besselian epoch.

Since the right ascension and declination of stars are constantly changing due to precession, astronomers always specify these with reference to a particular equinox. Historically used Besselian equinoxes include B1875.0, B1900.0, B1925.0 and B1950.0. The official constellation boundaries were defined in 1930 using B1875.0.

A Julian epoch is an epoch that is based on Julian years of exactly 365.25 days. Since 1984, Julian epochs are used in preference to the earlier Besselian epochs.

Julian epochs are calculated according to:

Since the right ascension and declination of stars are constantly changing due to precession, (and, for relatively nearby stars due to proper motion), astronomers always specify these with reference to a particular epoch. The earlier epoch that was in standard use was the B1950.0 epoch.

When the mean equator and equinox of J2000 are used to define a celestial reference frame, that frame may also be denoted J2000 coordinates or simply J2000. This is different from the International Celestial Reference System (ICRS): the mean equator and equinox at J2000.0 are distinct from and of lower precision than ICRS, but agree with ICRS to the limited precision of the former. Use of the "mean" locations means that nutation is averaged out or omitted. This means that the Earth's rotational North pole does not point quite at the J2000 celestial pole at the epoch J2000.0; the true pole of epoch nutates away from the mean one. The same differences pertain to the equinox.[4]

2.3. Other Equinoxes and Their Corresponding Epochs

Other equinoxes and epochs that have been used include:

Epochs and equinoxes for orbital elements are usually given in Terrestrial Time, in several different formats, including:

3. Sidereal Time and the Equation of the Equinoxes

4. Diminishing Role of the Equinox in Astronomy

In modern astronomy the ecliptic and the equinox are diminishing in importance as required, or even convenient, reference concepts. (The equinox remains important in ordinary civil use, in defining the seasons, however.) This is for several reasons. One important reason is that it is difficult to be precise what the ecliptic is, and there is even some confusion in the literature about it.[7] Should it be centered on the Earth's center of mass, or on the Earth-Moon barycenter?

Also with the introduction of the International Celestial Reference Frame, all objects near and far are put fundamentally in relationship to a large frame based on very distant fixed radio sources, and the choice of the origin is arbitrary and defined for the convenience of the problem at hand. There are no significant problems in astronomy where the ecliptic and the equinox need to be defined.[8]

More
©Text is available under the terms and conditions of the Creative Commons-Attribution ShareAlike (CC BY-SA) license; additional terms may apply. By using this site, you agree to the Terms and Conditions and Privacy Policy.
Upload a video for this entry
Information
Subjects: Others
Contributor MDPI registered users' name will be linked to their SciProfiles pages. To register with us, please refer to https://encyclopedia.pub/register :
HandWiki
View Times: 70
Entry Collection: HandWiki
Revision: 1 time (View History)
Update Date: 02 Dec 2022
Table of Contents
1000/1000
Hot Most Recent