+1 point
Thank you for your contribution! You can also upload a video entry related to this topic through the link below: https://encyclopedia.pub/user/video_add?id=37784
Check Note
2000/2000
Flybuys (Australia)

Edit
Upload a video
The content is sourced from: https://handwiki.org/wiki/Finance:Flybuys_(Australia)

flybuys is an Australia n loyalty program owned and operated by Coles, with the main participating retail outlets being Coles Supermarkets, Coles Express, Kmart, Liquorland, First Choice Liquor and Target stores. It is one of Australia's largest loyalty programs, with over 10 million flybuys cardholders in over 5.5 million Australian households. Members earn points from household consumer purchases (and through credit card use) and subsequently exchange points for gift cards, merchandise, flights and other rewards.

flybuys began in 1994 as a joint venture of Shell, Coles Myer (now Wesfarmers) and National Australia Bank. The program met with substantial interest at launch, with a million Australian households joining within the first six weeks.[1]

Telecom Australia (now Telstra) joined the program in 1995 but withdrew after two years, having created the Telstra Visa Card with ANZ (later to become the ANZ Qantas Telstra Visa Card). In April 2012, Telstra rejoined flybuys with points being offered for pre-paid services.[2]

In 1996, Loyalty Pacific licensed the brand to a consortium in New Zealand, which has operated a similar program since (see Fly Buys (New Zealand)).

In 1998, major changes were made to the program. The offer to members was diluted as the points currency was devalued to increase points required for rewards 20-fold (from a minimum 550 points to 11,000), but standard points issuance only increased fourfold (from 1 point for $20 to 1 point for $5). At the same time, Shell relinquished its one-third ownership of the program, although this was unnoticed by members as Shell continued to issue points through its service station network. 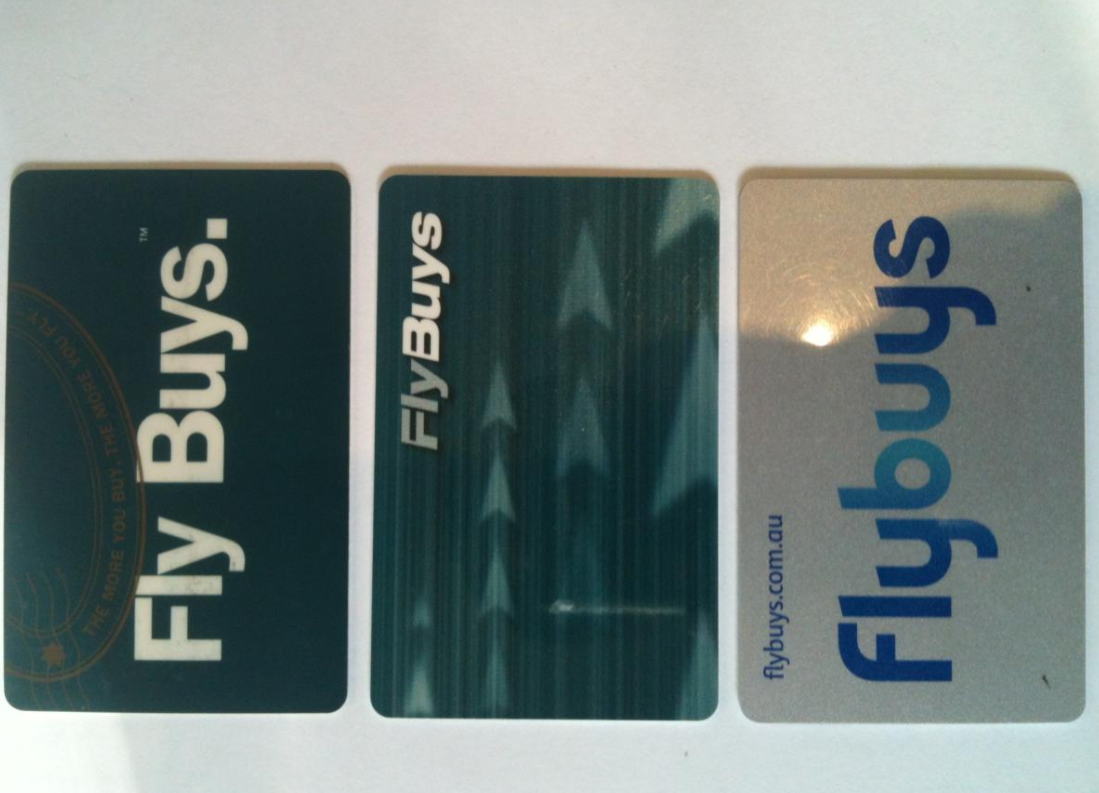 In 2003, the program was revamped, this time with the offer improved for members, with standard points issuance for participating Coles Group brands increased to 2 points for $5. This change was accompanied by revised branding and a minor name change from “Fly Buys” to “FlyBuys”.

In December 2006, Loyalty Pacific was cited as a potential purchaser of the Qantas Frequent Flyer program.[3]

In February 2011, Coles acquired National Australia Bank's 50 per cent interest in flybuys, with NAB remaining as a major participant in the program.[4]

In April 2012, Coles announced a substantial relaunch of the program (changing the brand from "FlyBuys" to "flybuys") with points issuance for major brands increasing to 1 point for $1, and introduced AGL, Telstra and Webjet as new partners. Expiry of points was removed for members who used their card or redeemed at least once a year. It sent new cards to over 8 million households in Australia and also introduced a benefit by which flybuys members could gain a 10% discount off five product categories of their choice.[5][6]

A consumer study of Australian loyalty programs in 2013 showed flybuys as easily the most popular program in Australia.[7]

In April 2018, Wesfarmers stated it would be demerging the Coles business, but retaining a substantial ownership stake in flybuys.[8]

In November 2018, Wesfarmers and Coles announced the appointment of John Merakovsky as Chief Executive Officer of flybuys.[9]

Additional points can be collected from transactions on the Coles MasterCard (issued by GE Australia ) or selected NAB credit cards or if they have been “linked” to a flybuys membership. This allows in some circumstances for points to be gained from two sources for the one transaction. E.g. if a member pays for grocery purchases at Coles Supermarkets with a NAB credit card, each of Coles and NAB would issue points for the one transaction.

In October 2012, flybuys created the flybuys Toolbar in conjunction with Yahoo!7, enabling members to collect points from their web searches.

In most cases points accrue at the rate of 1 for every $1 spent. The participating retailers also issue additional bonus points on a promotional basis. Points do not expire provided the card is used (or points redeemed) at least once per year.

Former participants in flybuys include Myer (which withdrew in 2007 after being sold by Coles Group in June 2006),[11] EziBuy (which purchased a former Coles Myer brand, Myer Direct), Michael Hill Jeweller, Elders Real Estate and Curves. Others such as Red Rooster and Katies were businesses divested by then Coles Myer. Traveland, Pulse Energy and Solar Shop are now-defunct businesses which were once flybuys participants, while Megamart, BI-LO, BI-LO Mega Frrresh, Baby Target, Target Home, Fossey’s, Grace Bros., Newmart, Sports Direct, Primary Layers, South Cape and Gifts To Go were Coles Myer/Coles Group brands that have been discontinued. Officeworks (though also owned by Wesfarmers) and Harris Technology withdrew in 2009.[12][13]

Initially, flybuys points could only be redeemed for flights. This was extended in 1996 to include other benefits with a travel or leisure theme, such as accommodation, meals and entertainment. In 1999, redemption by a $100 Coles Myer shopping voucher was introduced, and general merchandise items followed. In 2009, most redemptions were gift cards or credits to credit card balances and flights were a small proportion of redemptions.[14] According to flybuys, as of 2010 over ten million rewards had been redeemed by members and there were over 800 choices.[15][16] In 2012, "flybuys Dollars" was introduced, allowing members to redeem points when paying for purchases at Coles, Kmart, Target, Liquorland, First Choice Liquor and Coles Express.[5]

flybuys was criticised regarding the perceived effort required to collect enough points to gain a reward.[17] For many years, no rewards were available for less than 11,000 points, encouraging critics to claim that $55,000 was required to be spent to gain a reward with a value of around $100. However, since 2006, awards have been available from 2,500 points, and now as low as 1,200 points (streaming new release movies)[18].[19]

flybuys also attracted concerns regarding privacy of information and the ability for the operators to track members’ shopping habits.[20] In 1994, flybuys adopted a privacy policy based on OECD principles[21] in which it advised members it may use personal information such as name, age, gender, employment status and age of family members "for marketing, planning, product development, research, flybuys account administration and fraud and crime prevention and investigation." flybuys varied this policy in 2006 to enable information to be passed to Coles Group and National Australia Bank, the owners of the program, unless directed otherwise by members.[22] In 2009, flybuys' responsible privacy practices were recognised with the conferring of an Australian Privacy Award.[21]

More
©Text is available under the terms and conditions of the Creative Commons-Attribution ShareAlike (CC BY-SA) license; additional terms may apply. By using this site, you agree to the Terms and Conditions and Privacy Policy.
Upload a video for this entry
Information
Subjects: Others
Contributor MDPI registered users' name will be linked to their SciProfiles pages. To register with us, please refer to https://encyclopedia.pub/register :
HandWiki
View Times: 82
Entry Collection: HandWiki
Revision: 1 time (View History)
Update Date: 02 Dec 2022
Table of Contents
1000/1000
Hot Most Recent