+1 point
Thank you for your contribution! You can also upload a video entry related to this topic through the link below: https://encyclopedia.pub/user/video_add?id=37731
Check Note
2000/2000
Trickle-Down Economics

Edit
Upload a video
The content is sourced from: https://handwiki.org/wiki/Social:Trickle-down_economics

Trickle-down economics, also called trickle-down theory, refers to the economic proposition that taxes on businesses and the wealthy in society should be reduced as a means to stimulate business investment in the short term and benefit society at large in the long term. In recent history, the term has been used by critics of supply-side economic policies, such as "Reaganomics". Whereas general supply-side theory favors lowering taxes overall, trickle-down theory more specifically targets taxes on the upper end of the economic spectrum. The term "trickle-down" originated as a joke by humorist Will Rogers and today is often used to criticize economic policies that favor the wealthy or privileged while being framed as good for the average citizen. David Stockman, who as Ronald Reagan's budget director championed Reagan's tax cuts at first, later became critical of them and told journalist William Greider that "supply-side economics" is the trickle-down idea: Political opponents of the Reagan administration soon seized on this language in an effort to brand the administration as caring only about the wealthy. Some studies suggest a link between trickle-down economics and reduced growth. Trickle-down economics has been widely criticized, particularly by left-wing, centre-left and moderate politicians and economists, but also some right-wing politicians. A 2019 study in the Journal of Political Economy found, contrary to trickle-down theory, that "the positive relationship between tax cuts and employment growth is largely driven by tax cuts for lower-income groups and that the effect of tax cuts for the top 10 percent on employment growth is small." 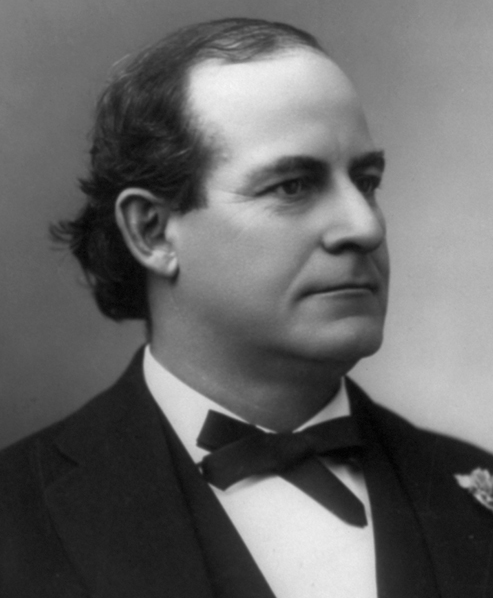 William Jennings Bryan, who criticized trickle-down theory in his Cross of Gold speech in 1896. https://handwiki.org/wiki/index.php?curid=1984413

In 1896, Democratic presidential candidate William Jennings Bryan described the concept using the metaphor of a "leak" in his Cross of Gold speech:[1][2]

Humorist Will Rogers jokingly advised in a column in 1932:[4]

This election was lost four and six years ago, not this year. They [Republicans] didn’t start thinking of the old common fellow till just as they started out on the election tour. The money was all appropriated for the top in the hopes that it would trickle down to the needy. Mr. Hoover was an engineer. He knew that water trickles down. Put it uphill and let it go and it will reach the driest little spot. But he didn’t know that money trickled up. Give it to the people at the bottom and the people at the top will have it before night, anyhow. But it will at least have passed through the poor fellow's hands. They saved the big banks, but the little ones went up the flue.

Humorist Will Rogers referred to the theory that cutting taxes for higher earners and businesses was a "trickle-down" policy, a term that has stuck over the years.[5]

The philosophy that had prevailed in Washington since 1921, that the object of government was to provide prosperity for those who lived and worked at the top of the economic pyramid, in the belief that prosperity would trickle down to the bottom of the heap and benefit all.

After leaving the presidency, Democrat Lyndon B. Johnson alleged "Republicans [...] simply don't know how to manage the economy. They're so busy operating the trickle-down theory, giving the richest corporations the biggest break, that the whole thing goes to hell in a handbasket."[8]

Although "trickle-down" is commonly mentioned in reference to income, it has been used by economist Arthur Okun to refer to the flow of the benefits of innovation, which do not accrue entirely to the "great entrepreneurs and inventors," but trickle down to the masses.[9] More precisely, Nobel prize economist William Nordhaus estimates that innovators are able to capture only an extremely low 2.2 percent of the total surplus from innovation.[10] Circling back to income "trickle-down," the surplus from innovation can take the form of gains in real wages, which are spread throughout the economy, according to Nobel prize economist Paul Romer.[11] In particular, economist William Baumol argues that "the bulk of the unprecedented and widespread rise in the developed world’s living standards since the Industrial Revolution could not have occurred without the revolution’s innovations."[12]

Economist Thomas Sowell has written extensively on trickle-down economics and loathes its characterization, citing that supply-side economics has never claimed to work in a "trickle-down" fashion. Rather, the economic theory of reducing marginal tax rates works in precisely the opposite direction: "Workers are always paid first and then profits flow upward later – if at all."[14]

The economist John Kenneth Galbraith noted that "trickle-down economics" had been tried before in the United States in the 1890s under the name "horse-and-sparrow theory", writing:

Mr. David Stockman has said that supply-side economics was merely a cover for the trickle-down approach to economic policy—what an older and less elegant generation called the horse-and-sparrow theory: 'If you feed the horse enough oats, some will pass through to the road for the sparrows.'

Galbraith claimed that the horse-and-sparrow theory was partly to blame for the Panic of 1896.[15] While running against Ronald Reagan for the Presidential nomination in 1980, George H. W. Bush had derided the trickle-down approach as "voodoo economics".[16] In the 1992 presidential election, independent candidate Ross Perot also referred to trickle-down economics "political voodoo".[17] In the same election during a presidential town hall debate, Bill Clinton said:

What I want you to understand is the national debt is not the only cause of [declining economic conditions in America]. It is because America has not invested in its people. It is because we have not grown. It is because we've had 12 years of trickle-down economics. We've gone from first to twelfth in the world in wages. We've had four years where we’ve produced no private-sector jobs. Most people are working harder for less money than they were making 10 years ago.[18]

In New Zealand, Labour Party Member of Parliament Damien O'Connor has called trickle-down economics "the rich pissing on the poor" in the Labour Party campaign launch video for the 2011 general election.[19]

A 2012 study by the Tax Justice Network indicates that wealth of the super-rich does not trickle down to improve the economy, but it instead tends to be amassed and sheltered in tax havens with a negative effect on the tax bases of the home economy.[20]

In 2013, Pope Francis referred to "trickle-down theories" in his apostolic exhortation Evangelii Gaudium with the following statement (No. 54):

Some people continue to defend trickle-down theories which assume that economic growth, encouraged by a free market, will inevitably succeed in bringing about greater justice and inclusiveness in the world. This opinion, which has never been confirmed by the facts, expresses a crude and naïve trust in the goodness of those wielding economic power and in the sacralized workings of the prevailing economic system.[21]

A 2015 paper by researchers for the International Monetary Fund argues that there is no trickle-down effect as the rich get richer:

A 2015 report on policy by economist Pavlina R. Tcherneva described the failings of increasing economic gains of the rich without commensurate participation by the working and middle classes, referring to the problematic policies as "Reagan-style trickle-down economics," and "a trickle-down, financial-sector-driven policy regime."[23]

In a 2016 presidential candidates debate, Hillary Clinton accused Donald Trump of supporting the "most extreme" version of trickle-down economics with his tax plan, calling it "trumped-up trickle-down" as a pun on his name.[24]

More
©Text is available under the terms and conditions of the Creative Commons-Attribution ShareAlike (CC BY-SA) license; additional terms may apply. By using this site, you agree to the Terms and Conditions and Privacy Policy.
Upload a video for this entry
Information
Subjects: Economics
Contributor MDPI registered users' name will be linked to their SciProfiles pages. To register with us, please refer to https://encyclopedia.pub/register :
HandWiki
View Times: 165
Entry Collection: HandWiki
Revision: 1 time (View History)
Update Date: 02 Dec 2022
Table of Contents
1000/1000
Hot Most Recent