+1 point
Thank you for your contribution! You can also upload a video entry related to this topic through the link below: https://encyclopedia.pub/user/video_add?id=37499
Check Note
2000/2000
Roy Spencer 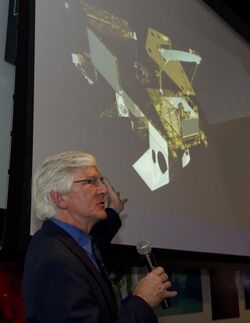 Roy Warren Spencer (born December 20, 1955)[1] is a meteorologist,[2] a principal research scientist at the University of Alabama in Huntsville, and the U.S. Science Team leader for the Advanced Microwave Scanning Radiometer (AMSR-E) on NASA's Aqua satellite.[3][4] He has served as senior scientist for climate studies at NASA's Marshall Space Flight Center.[3][4]

He is known for his satellite-based temperature monitoring work, for which he was awarded the American Meteorological Society's Special Award.[4]

After receiving his Ph.D. in 1982, Spencer worked for two years as a research scientist in the Space Science and Engineering Center at the University of Wisconsin–Madison.[3] He then joined NASA's Marshall Space Flight Center as a visiting scientist in 1984,[4] where he later became senior scientist for climate studies. After leaving NASA in 2001, Spencer has been a principal research scientist at the University of Alabama in Huntsville (UAH). As well as his position at UAH, Spencer is currently the U.S. Science Team leader for the Advanced Microwave Scanning Radiometer (AMSR-E) on NASA's Aqua satellite, a position he has held since 1994.[3]

In 2001, he designed an algorithm to detect tropical cyclones and estimate their maximum sustained wind speed using the Advanced Microwave Sounding Unit (AMSU).[6][7]

Spencer's research work is funded by NASA, NOAA, DOE, and the DOT[4]

In 2007, Spencer and others published a paper in Geophysical Research Letters regarding negative cloud feedback in the tropics that potentially supports Richard Lindzen's Iris hypothesis, which proposes that as the tropical atmosphere warms, cirrus clouds decrease, allowing infrared heat to escape from the atmosphere to outer space.[10][11] Spencer stated, "To give an idea of how strong this enhanced cooling mechanism is, if it was operating on global warming, it would reduce estimates of future warming by over 75 percent. [...] Right now, all climate models predict that clouds will amplify warming. I'm betting that if the climate models' 'clouds' were made to behave the way we see these clouds behave in nature, it would substantially reduce the amount of climate change the models predict for the coming decades."[11][12]

In 2008, Spencer and William Braswell published a paper in the Journal of Climate which suggests that natural variations in how clouds form could actually be causing temperature changes, rather than the other way around, and could also lead to overestimates of how sensitive the Earth's climate is to greenhouse gas emissions.[13][14] Spencer stated, "Our paper is an important step toward validating a gut instinct that many meteorologists like myself have had over the years, [...] that the climate system is dominated by stabilizing processes, rather than destabilizing processes – that is, negative feedback rather than positive feedback."[15]

3.3. Energy Lost to Space As Compared to Climate Models

In 2011, Spencer and Braswell published a paper in Remote Sensing concluding that more energy is radiated back to space and released earlier than previously thought.[16][17] Spencer stated, "The satellite observations suggest there is much more energy lost to space during and after warming than the climate models show. There is a huge discrepancy between the data and the forecasts that is especially big over the oceans."[17][18][19]

The paper was criticized by numerous climate scientists.[20][21] Kerry Emanuel of MIT, said this work was cautious and limited mostly to pointing out problems with forecasting heat feedback.[20]

The editor-in-chief of Remote Sensing, Wolfgang Wagner, later resigned over publication of Spencer and Braswell (2011),[22] stating, "From a purely formal point of view, there were no errors with the review process. [...] the problem I see with the paper by Spencer and Braswell is not that it declared a minority view ...but that it essentially ignored the scientific arguments of its opponents. This latter point was missed in the review process, explaining why I perceive this paper to be fundamentally flawed and therefore wrongly accepted by the journal."[23] Wagner added he, "would also like to personally protest against how the authors and like-minded climate skeptics have much exaggerated the paper's conclusions in public statements".[22][23]

Andrew Dessler later published a paper opposing the claims of Spencer and Braswell (2011) in Geophysical Research Letters.[24] He stated, among other things:

First, [they] analyzed 14 models, but they plotted only six models and the particular observational data set that provided maximum support for their hypothesis. Plotting all of the models and all of the data provide a much different conclusion.

In 2006 Spencer disagreed with Al Gore's documentary An Inconvenient Truth.[25]

In an interview with conservative talk show host Rush Limbaugh on February 28, 2007, Spencer stated that he didn't believe "catastrophic manmade global warming" was occurring. He also criticized climate models, saying "The people that have built the climate models that predict global warming believe they have sufficient physics in those models to predict the future. I believe they don't. I believe the climate system, the weather as it is today in the real world shows a stability that they do not yet have in those climate models."[26] Roy Spencer is also included in a film that argues against the theory of man-made global warming called The Great Global Warming Swindle.

He testified before the Waxman committee's examination of political interference with climate science on March 19, 2007.[4]

Spencer is a signatory to "An Evangelical Declaration on Global Warming",[30][31] which states that "We believe Earth and its ecosystems—created by God's intelligent design and infinite power and sustained by His faithful providence—are robust, resilient, self-regulating, and self-correcting, admirably suited for human flourishing, and displaying His glory. Earth's climate system is no exception. Recent global warming is one of many natural cycles of warming and cooling in geologic history."[32] He believes that most climate change is natural in origin, the result of long-term changes in the Earth's albedo and that anthropogenic greenhouse gas emissions have caused some warming, but that its warming influence is small compared to natural, internal, chaotic fluctuations in global average cloud cover.[33] This view contradicts the scientific consensus that "most of the warming observed over the last 50 years is attributable to human activities".[34] Climatologist Patrick Michaels, also a self-professed skeptic of global warming, has defended Spencer, arguing that his religious beliefs have nothing to do with his climate change research.[35]

On July 18, 2013 before U.S. Senator Barbara Boxer's Environment and Public Works committee, Spencer suggested the hearing title could easily be renamed "Climate Change, It's Happened Before" rather than the actual title, "Climate Change, It's Happening Now". He added "The last 2000 years of proxy reconstructed temperature variations for the Northern Hemisphere shows that the Modern Warm Period (today) is not significantly different from the Medieval Warm Period of ~1000 years ago, or the Roman Warm Period of ~2000 years ago."[36]

In February 2014 Spencer posted on his blog that he was going to start referring to those who referred to those questioning the mainstream view of global warming (such as Spencer himself) as "climate change deniers" as "global warming Nazis", contending that "...these people are supporting policies that will kill far more people than the Nazis ever did."[37][38] The Anti-Defamation League responded with a statement condemning Spencer's comparison. Shelley Rose, the ADL's Southeast Interim Regional Director, argued that the comparison of global warming advocates to Nazis was "outrageous and deeply offensive," and "This analogy is just the latest example of a troubling epidemic of comparisons to Hitler and the Holocaust."[39] In reply, Spencer asked whether the ADL was being hypocritical. Spencer quoted syndicated columnist Ellen Goodman's famous statement that "global warming deniers are now on a par with Holocaust deniers," and said that the ADL should condemn that use of "denier."[40] Spencer was defended by Committee for a Constructive Tomorrow adjunct policy analyst Alan Caruba, who wrote that "Dr. Spencer’s decision to call a Nazi a Nazi ignited a lot of discussion among the global warming hustlers and those whom they have been calling “deniers” for many years."[41]

In TCS Daily, Spencer embraced the pseudoscience of intelligent design[42]

In the book The Evolution Crisis, Spencer wrote, "I finally became convinced that the theory of creation actually had a much better scientific basis than the theory of evolution, for the creation model was actually better able to explain the physical and biological complexity in the world. [...] Science has startled us with its many discoveries and advances, but it has hit a brick wall in its attempt to rid itself of the need for a creator and designer."[43]