+1 point
Thank you for your contribution! You can also upload a video entry related to this topic through the link below: https://encyclopedia.pub/user/video_add?id=37017
Check Note
2000/2000
Rory A. Cooper

Edit
Upload a video
The content is sourced from: https://handwiki.org/wiki/Biography:Rory_A._Cooper
rehabilitation bioengineering health 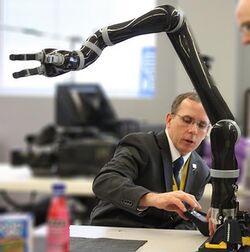 Rory A. Cooper is an American bioengineer who currently serves as Distinguished Professor and FISA/PVA Chair of the Department of Rehabilitation Science and Technology and professor of Bioengineering, Physical Medicine and Rehabilitation, and Orthopedic Surgery at the University of Pittsburgh.[1][2][3] He is also Associate Dean for Inclusion in the School of Health and Rehabilitation Sciences.[4] He holds an Adjunct Faculty position at the Robotics Institute of Carnegie Mellon University, and is an Invited Professor at Xi'an Jiaotong University in Xi'an, China.[5][6]

He is the founder and director of the Human Engineering Research Laboratories.[7]

Cooper enlisted in the United States Army in 1976 and was assigned to the 3rd Ordnance Battalion, 32nd Air Defense Artillery Command with U.S. Army Europe and was later attached to the 5th Signal Command, USAREUR, and the U.S. Military Community Activity Worms, 21st Support Command.[9]

While stationed in Germany in 1980, he was hit by a bus while riding a bicycle. As a result, he became paralyzed from the waist down.[10]

From 1989 to 1994, Cooper was an assistant professor in Bioengineering at Sacramento State University.[13][14] In 1994, Cooper became an Associate Professor at the Department of Rehabilitation Science and Technology at the University of Pittsburgh (obtaining full professorship in 1998).[15] Also in 1994, he founded the Human Engineering Research Laboratories, which includes the VA Center of Excellence in Wheelchairs and Associated Rehabilitation Engineering.[16][17]

He is also a Senior Research Career Scientist with the United States Department of Veterans Affairs.[18]

Cooper has been a National Academies of Sciences Distinctive Voices Lecture, ACC Distinguished Lecturer, Smithsonian Institution ADA 25th Anniversary Festival Speaker, Young Lecture at the Royal Military College of Canada, and inaugural AAAS-Lemelson Foundation Invention Ambassador. He has also been elected to Eta Kappa Nu, Tau Beta Pi, and Sigma Xi honorary societies. Cooper is a former President of RESNA, and a member of the IEEE-EMBS Medical Device Standards Committee. Additionally, he has been a member of the U.S. Centers for Medicare and Medicaid Services – Medicare Advisory Committee, U.S. Secretary of Veterans Affairs Prosthetics and Special Disability Programs Advisory Committee, Chair of the National Advisory Board on Medical Rehabilitation Research, National Institute of Child Health & Human Development, U.S. Department of Defense Health Board Subcommittee on Amputation and Orthopedics, Board of Directors of Easter Seals, National Academy of Medicine Committee on Assistive Products and Devices, and National Academy of Sciences Keck Foundation Initiative on Human Health Span Steering Committee.[27]

Cooper holds 25 patents in wheelchair technology.[30] He is the inventor of many advanced mobility devices and assistive technologies. Among these are MEBot, a stair-climbing wheelchair;[31] PneuChair, a wheelchair powered entirely by compressed air;[32] and Virtual Seating Coach, a smartphone app to control power wheelchair seating systems.[33][34]

The July 26, 2010 issue of Popular Science profiled Cooper, and a photo of him with a robotic wheelchair he invented was the issue's centerfold.[35]

At the 1988 Paralympic Games in Seoul, South Korea, Cooper received a Bronze Medal in the 4x400-meter wheelchair relay.[36]

Cooper is an accomplished handcyclist and competes annually in the Pittsburgh Marathon.[41]

Cooper continuously shares his athletic knowledge and skills with "newly injured Soldiers and Veterans." He encourages athletes with disability to "compete" at the "Army 10-miler, Marine Corps Marathon, Air Force Marathon, and NVWG." He also volunteers his expertise as a member of the "US Paralympic" staff including "1992, 1996, and 2008."[42]

Cooper has received many honors; among the most recent are a 2017 Fellowship in the American Association for the Advancement of Science for engineering,[49] recipient of one of the 2017 Samuel J. Heyman Service to America Medals,[50] recognition as a "Health Hero" in Oprah Magazine,[51] and the 2016 Marlin Mickle Outstanding Innovator Award.[52]

In 2009, Cooper was featured on a special edition Cheerios cereal box to celebrate his accomplishments.[54]

In appreciation of his work and accomplishments, the Pittsburgh City Council proclaimed June 17, 2014, as "Dr. Rory A. Cooper Day."[55]