+1 point
Thank you for your contribution! You can also upload a video entry related to this topic through the link below: https://encyclopedia.pub/user/video_add?id=36899
Check Note
2000/2000
End-of-Life Management of Lithium-Ion Batteries and Circular Economy

The use of electric vehicles (EVs) has been recognized as a key method for reducing air pollution and greenhouse gas emissions. Electric vehicles have zero tailpipe emissions as well as a smaller carbon footprint, if renewable power is used to recharge, over the course of their lifetime when compared to vehicles using traditional internal combustion engines [1]. Lithium-ion batteries (LIBs) are the primary type of battery used in EVs and will thus be the focus of this research [2][3][4]. In August 2021, US President Biden set a target for half of all new vehicle sales by 2030 to be zero-emission vehicles, primarily electric cars and trucks [2]. This projected increased adoption of EVs raises important questions about the availability and sustainability of the raw materials used for LIBs that will be powering them.
Without a standardized system, the materials used in these batteries will quickly end up in landfills. Irregular disposal of spent batteries can lead to fire hazards and the leaching of toxic substances into the environment. In the case of lithium-ion batteries, lithium cobalt oxide and lithium manganese oxide are used as cathodes, as well as lithium hexafluoride phosphate, lithium tetrafluoride borate, and other lithium salts as electrolytes. These materials are not only hazardous, but they are also valuable. If they are lost due to improper disposal, manufacturers will be forced to keep extracting new materials from the ground. Such action not only depletes nonrenewable resources, but it harms those living in the countries where mining takes place, as the labor often is performed by children and is done under dangerous conditions. Additionally, the dust from explosives used in mining, as well as the sulfuric acid used for mining and processing operations, are linked to health problems including respiratory diseases and birth defects.

2. Why Improving EOL Management and Developing a Circular Economy Is Important

The current LIB economy is quite linear, with batteries being disposed of at their end of life. This not only results in environmental pollution but also causes rapid resource depletion. Figure 1 shows the current linear economy for lithium-ion electric vehicle batteries.

Figure 2. Potential circular economy for lithium-ion electric vehicle batteries.
An important step in establishing a circular LIB economy will be refining the processes associated with reuse and recycling, and ensuring these processes smoothly feed back into the economy. This will require technological innovation especially green technology, along with policy and regulatory steps, which is the focus of this manuscript.

Figure 3 shows the outlook for global passenger car production with three potential future projections. The initial red curve of Figure 3 has been produced using a dataset for world passenger car production from 1994 to 2020 compiled by the Bureau of Transportation Statistics (BTS) [3]. It is important to note that the BTS does not include “minivans, pickups, and sport utility vehicles” in the passenger car category and excludes commercial vehicles from the data. In addition, some smaller countries have not been listed in the table for world totals. The later blue curve of the graph is a projection of global passenger car production until 2030, created using a line of best fit. The lower blue curve would be assuming the current global semiconductor shortage coupled with the impact of the pandemic. The middle curve was proposed by BTS and the upper blue curve are the best possible outcome with federal incentives. Using the outlook from Figure 3, approximately 450 million new passenger cars will be produced between 2022 and 2030. 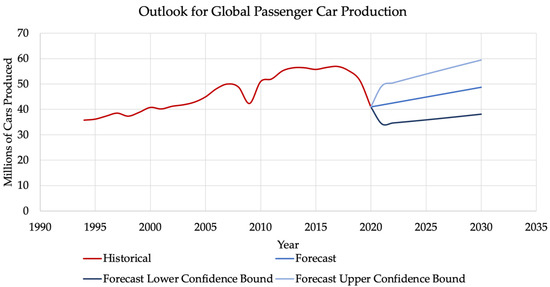 Figure 3. Outlook for global passenger car production with three potential projections.
The World Resources Institute (WRI) proposes that “growth in sales of electric vehicles is likely to follow an S-Curve or market diffusion curve.” Figure 4 shows a S-curve, developed from historic, projected, and benchmark data provided by Climate Action Tracker [5] and based on the graph created by the WRI [6] that demonstrates the growth trend of passenger EVs that is necessary to meet the 2035 benchmark in the United States. Using this projection, about 225 million passenger vehicles—an average of 50% of the 450 million new passenger vehicles—will be electric vehicles. Though the quantity of metals that need to be mined for electric vehicles vary depending on the battery type and model of the vehicle, based on Castelvecchi [7] and data from Argonne National Laboratory, “a single car lithium-ion battery pack, of a type known as NMC532, could contain around 8 kg of lithium, 35 kg of nickel, 20 kg of manganese and 14 kg of cobalt.” The NMC batteries are the most common type of battery for electric vehicles. 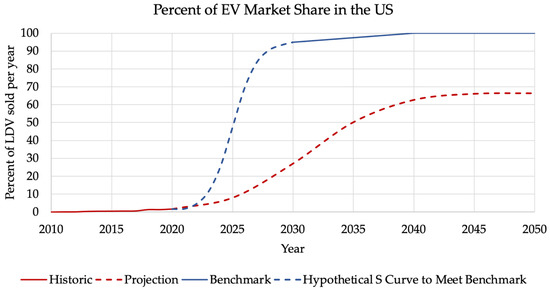 Figure 4. A S-curve created with data from Climate Action Tracker [5] and based on that made by the WRI [6] to demonstrates the growth of passenger EVs.
Thus, the required projection of 225 million new battery packs would demand 1.8 million metric tons of lithium, 7.9 million metric tons of nickel, 4.5 million metric tons of manganese, and 3.2 million metric tons of cobalt. According to the USGS, identified worldwide cobalt resources, including mine production and reserves, only total around 8 million metric tons [8]. Thus, it is clear that the production of LIBs alone would use up 40% of the identified cobalt resources, assuming that the chemistry of these batteries does not change, and the EV share of global new passenger vehicle sales follows the projected path. It should be noted that this estimated resource demand does not include lithium-ion battery demand from commercial cars or other vehicles. It also does not consider the other major cobalt-reliant sectors, such as superalloy, hard materials, and ceramics and pigment. Ensuring the reuse and recycling of EOL LIBs will keep high-demand metals like cobalt in circulation and prevent rapid resource depletion.

Lithium extraction is another concern as it often results in environmental degradation. Two of the top lithium sources are in Australia and Chile [9]. Butt et. al., 2022 performed an in-depth study and showed the detrimental environmental impacts of the current lithium harvesting technologies [10]. According to Butt et. al., 2022, 59% of lithium is extracted from naturally occurring salt deposits [10]. First, a naturally occurring salt is converted to a concentrated brine solution and pumped out of the ground [11]. The solution is then poured into large, shallow ponds to evaporate the excess water, after which the remaining lithium compound is purified and processed. This method is quite energy-intensive due to the machinery required to pump the brine solution out of the ground. Additionally, because this method relies on rapidly evaporating large pools of brine, it quickly depletes the surrounding water supply.
Furthermore, Butt et. al., 2022, states that 25% of lithium is extracted from lithium-bearing mineral clays such as lepidolite and zinnwalidite [10]. Some of the commonly used methods to harvest lithium from these clays are chemical leaching, bioleaching, and pressure leaching. Though all of these processes have a nearly perfect purity rate of 99%, they are also relatively energy intensive as well. Furthermore, they require the heavy usage of chemicals, which if not properly disposed of, can seep into surrounding waterways and natural habitats [11].
Though cleaner harvesting techniques, such as ion-selective nanostructured membranes are emerging [10], it is likely that it will take time for extraction companies to switch to these less conventional methods. Thus, recovering and using the recycled material from LIBs will place less demand on extracting raw lithium, thereby mitigating the harmful environmental effects that often accompany extracting lithium from the environment.

The social toll of extracting LIB metals is also concerning. About 20–30% of the cobalt that the Democratic Republic of Congo produces comes from small-scale, artisanal mining, where there are minimal labor laws and safety protocols. There are over 200,000 artisanal miners, including at least 40,000 children. Child laborers dig for crustal rock, which contains cobalt, under inhumane conditions. They receive little to no protective equipment and work in low oxygen levels, although they make as little as one dollar a day [12]. It is estimated that around 2000 miners die each year in the Congo, while other workers suffer permanent lung damage, skin conditions, and permanent injuries [12]. Banza Lubaba Nkulu et al., 2018, showed that in the town of Kolwezi, “people living in a neighborhood that had been transformed into an artisanal cobalt mine had much higher levels of cobalt in their urine and blood than people living in a nearby control area” [13]. Several US EV manufacturers, including Tesla and Volkswagen, often source their cobalt from Chinese-owned mines in the Congo [12]. This is due to the lower cost of buying cobalt from an unregulated mine than from a regulated mine, as labor costs are less at the former. As the demand for new LIBs increases, so will the likelihood that a larger percentage of cobalt will come from unethically sourced labor. Transitioning away from a linear LIB economy will keep metals like cobalt in circulation, thus reducing the amount of new cobalt bought from unregulated mines and limiting the human costs of mining.

LIBs that are not recycled or reused may be improperly landfilled rather than being disposed of at hazardous waste collection facilities. This can lead to destructive fires. According to the USEPA, there were more than 240 fires caused by LIBs at 64 facilities between 2013 and 2020 [14]. Though many of these fires were caused by LIBs from small consumer devices, such as cellphones and laptops, LIBs from EVs could make up a larger percentage of fires in the future if they continue to be landfilled. Increasing recycling and reuse will prevent many LIBs from being incorrectly disposed of at their EOL.

More
© Text is available under the terms and conditions of the Creative Commons Attribution (CC BY) license; additional terms may apply. By using this site, you agree to the Terms and Conditions and Privacy Policy.
Upload a video for this entry
Information
Subjects: Engineering, Environmental
Contributors MDPI registered users' name will be linked to their SciProfiles pages. To register with us, please refer to https://encyclopedia.pub/register :
Jay N. Meegoda
,
Sarvagna Malladi
,
Isabel C. Zayas
View Times: 82
Revisions: 2 times (View History)
Update Date: 01 Dec 2022
Table of Contents
1000/1000
Hot Most Recent