+1 point
Thank you for your contribution! You can also upload a video entry related to this topic through the link below: https://encyclopedia.pub/user/video_add?id=36818
Check Note
2000/2000
Chrysler Minivan (AS)

Edit
Upload a video
The content is sourced from: https://handwiki.org/wiki/Engineering:Chrysler_minivan_(AS)

The second-generation Chrysler minivans are a series of minivans that were manufactured and marketed by Chrysler Corporation in North America and Europe from 1991 to 1995. Officially designated the AS platform by Chrysler, the second-generation minivans were again sold in passenger and cargo configurations by the Chrysler, Plymouth, and Dodge divisions. Launched in late 1990 for the 1991 model year, the second-generation minivans were an extensive revision of the first-generation chassis and body. The model range became the first minivans offered with driver-side airbags (1991) and with optional integrated child safety seats (1992). While adding all-wheel drive as an option for the first time, the AS platform would also mark the last offering of a manual transmission. As with its predecessor, Chrysler assembled second-generation minivans at Windsor Assembly in Windsor, Ontario, Canada, with additional production at Saint Louis (North) Assembly in Fenton, Missouri from 1990 to 1994. In 1992, to supplement exports from the United States, the Chrysler Voyager began production in Graz, Austria (in the Eurostar joint venture factory between Chrysler and Steyr-Daimler-Puch). For the 1996 model year, the AS-generation minivans were replaced by the NS platform, marking the first complete redesign of the Chrysler minivans since their introduction.

Introduced in November 1990, the second-generation Chrysler minivans were marketed by the Dodge, Plymouth, and Chrysler divisions. The Dodge Caravan and Plymouth Voyager nameplates returned, with both short-wheelbase and long-wheelbase (Grand) body configurations. As with the first-generation minivans, base-trim examples were equipped with 5-passenger seating, with 7-passenger seating as standard in higher-trim versions (SE, LE, ES/LX, and all Town & Country vans).[1]

For 1994, the model range underwent a mid-cycle revision, primarily intended to comply with 1998 upgrades to US federal safety standards for cars (although the entire model range was officially considered a light truck).[2] Alongside minor exterior styling changes, the minivans were given given dual airbags, four-wheel disc brakes with ABS, and side impact beams in the front and sliding doors.[2] In another set of revisions, Chrysler sought to make the vans quieter, improving fit and finish.[2]

The second-generation Chrysler minivans are officially designated the Chrysler AS platform (matching the Chrysler shift to two-letter platform designations in 1990). Largely a substantial revision of the first-generation S-platform minivans, the AS chassis retained the 112.0 inch wheelbase for standard-wheelbase vans and 119.1 inches for extended-wheelbase "Grand" vans. While structurally unrelated to the (discontinued) Chrysler K-cars, the second-generation minivans shifted mechanical commonality towards its larger derivatives, adopting engines and transmissions from the Chrysler AA platform (Dodge Spirit/Plymouth Acclaim) and the Chrysler AC/AY platform (Chrysler New Yorker/Fifth Avenue/Imperial and Dodge Dynasty).

Retaining the unibody construction of the first-generation minivans, the second-generation minivans are fitted with a MacPherson strut front suspension with coil rear springs; all-wheel drive versions have 4-wheel independent suspension with a leaf-sprung rear axle.[1] During the development of the platform, attention was paid on refining the handling over the first-generation vans, in order to improve stability, maneuverability, and steering feel.[1]

For 1991 to 1993, a disc front/rear drum brake configuration was utilized, with a four-wheel disc brake system introduced in 1994. All versions were fitted with anti-lock brakes.[1][2]

With the lone exception of the Chrysler 2.5L Turbo I inline-4, the second-generation minivans returned the powertrain from their 1990 predecessors. The standard engine was a naturally-aspirated Chrysler 2.5L inline-4, producing 100 hp; this engine was standard on standard-wheelbase passenger vans and all cargo vans. A Mitsubishi-produced 3.0L V6 (producing 142 hp) was an option on short-wheelbase vans. Introduced in 1990, the Chrysler 3.3L V6 (producing 150 hp; increased to 162 hp in 1994) was standard on all Grand Voyagers/Grand Caravans, Town & Countrys, and vans with all-wheel drive; the 3.3L V6 was offered on short-wheelbase as a second option.

For 1994, the AS-platform minivans adopted the 3.8L V6 engine from the Chrysler Imperial. A larger-bore version of the 3.3L V6 tuned for additional torque output, while producing the same 162 hp of the 3.3L V6, produced 213 lb-ft of torque. The standard engine of the Chrysler Town & Country and all-wheel drive vans, the 3.8L engine became an option on the Grand Voyager/Grand Caravan.

Initially deleted from the model line for 1991, the 5-speed manual transmission made a return for 1992 through 1994 on base-trim or cargo vans.[1] The 2.5L engine was available with a 3-speed TorqueFlite automatic, along with the 3.0L V6. The 4-speed Ultradrive overdrive automatic transmission was fitted to both the 3.3L and 3.8L V6 engines.

In an extensive redesign, the second-generation minivans featured a major revision of the exterior, lowering the exterior coefficient of drag from 0.43 to 0.39. While the styling changes were largely evolutionary, the only shared body panels from the first-generation vans were the front doors and the sliding door.

The front fascia saw the largest degree of change, with redesigned front fenders allowing for a lower hoodline. Introduced in 1987, composite headlamp units made their return, wrapping into the front fenders. With the lower hoodline, a smaller grille was used. As part of the model change, stylists sought to differentiate the three model ranges from each other. The Plymouth Voyager was given chrome-trimmed headlights and a sleeker version of its 1987-1990 grille; the Dodge Caravan was given headlamps without chrome trim and adopted the Dodge divisional four-segment grille for the first time. The Chrysler Town & Country shared its headlamps with the Plymouth Voyager with a model-specific waterfall-style grille. In an effort to lessen rust and improve fit and finish, front and rear bumpers were redesigned, with wraparound plastic bumpers replacing steel and rubber-ended bumpers.

In line with the front fascia, the rear fascia underwent several major changes, with the rear liftgate redesigned. In addition to rounded edges to improve aerodynamics, the liftgate added a larger rear window and a center/third rear brake lamp; the rear window wiper was updated to feature intermittent modes.[1]

In addition to the extensive exterior changes, the interior saw a complete redesign; as with the previous generation, the Dodge Caravan and Plymouth Voyager shared nearly identical interiors (across comparable trim levels). Coinciding with the addition of a driver-side airbag, the dashboard was reconfigured, placing many primary and secondary controls within closer reach of the driver.[1] Dodge and Plymouth vans were offered with two different analog instrument panels, with the Chrysler Town & Country fitted with a digital instrument panel. For the first time, a glovebox was added to the dashboard (the underseat storage drawer made its return).

The 1991 redesign adopted the seating configurations offered on the 1989-1990 vans. While 5-passenger seating remained available on base-trim vans, 7-passenger seating became standard for all SE and LE-trim vans (regardless of wheelbase). To meet federal safety standards, all outboard seating positions were fitted with 3-point seatbelts. The Chrysler Town & Country (in line with other high-content minivans) shifted from a second-row bench seat to second-row bucket seats as part of the redesign. Marketed as "Quad Command" seats, the configuration was available on higher-trim (LE and LX/ES) Dodge and Plymouth vans.[1][2] For 1992, for vans with second-row bench seats, Chrysler introduced integrated child safety seats as an optional feature.[1] For 1994, the integrated child safety seats were modified, allowing for a recline position (closer to a standard carseat).[2]

From the first-generation minivans, Chrysler carried over the previous trim levels essentially unchanged (the Mini Ram Van was replaced by the Dodge Caravan C/V). Although once a distinguishing feature of the Chrysler minivans in the 1980s, simulated woodgrain trim began to fall out of favor in the 1990s. In 1992, woodgrain became a delete option from the Chrysler Town & Country and removed entirely from the Dodge Caravan for 1994.

As part of the 1994 model revision, the liftgate badging was changed from a stamped silver-on-black badge to a smaller embossed silver font; this was the first change to badging since 1984. Chrysler Town & Country versions retained their script-style badging.

Although woodgrain trim had been associated with the Town & Country nameplate since the 1940s, in 1992, the feature became a delete option (replaced by a gold pinstripe and a Town & Country fender script) as it began to fall out of favor with buyers. In 1993 for MY1994, Chrysler introduced a version of the Town & Country with a body-color grille alongside the woodgrain side trim.[2] 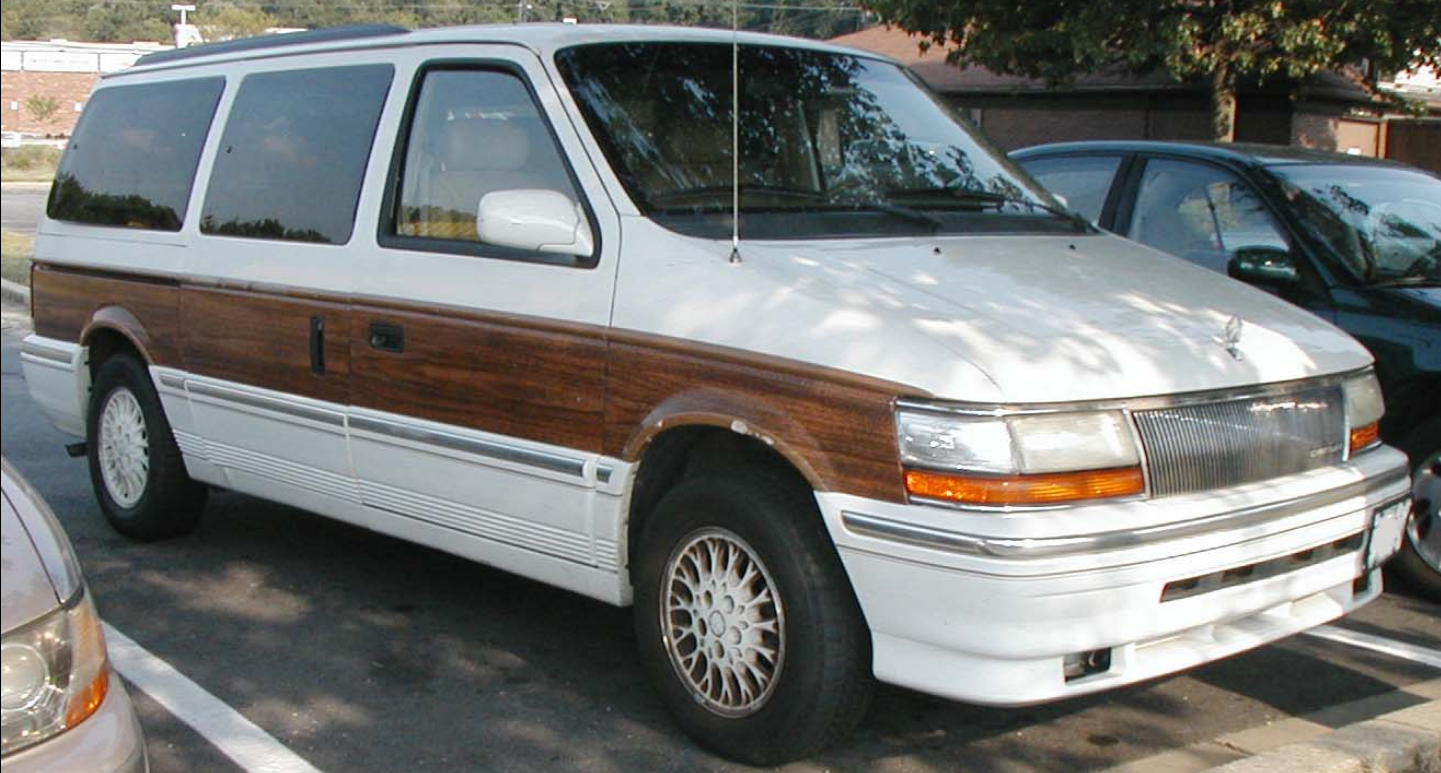 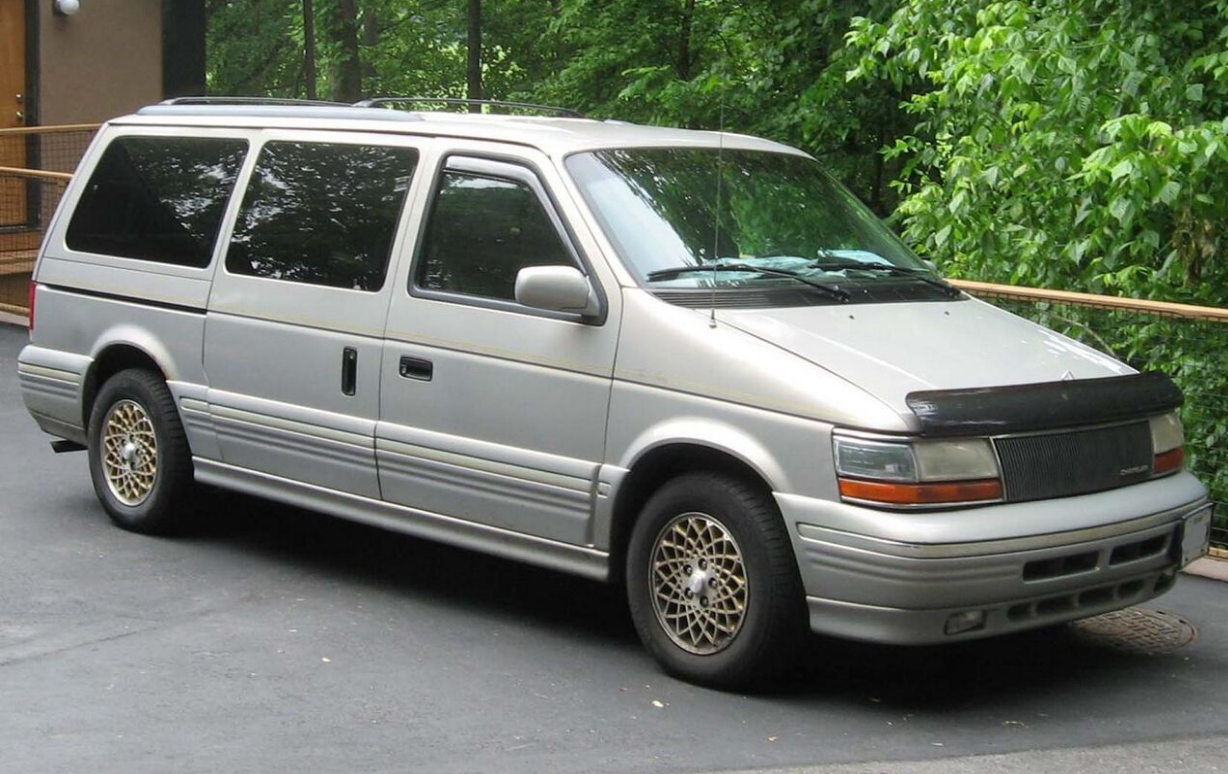 Outside North America, as Chrysler does not own the rights to the Dodge or Plymouth brands, exports of the Chrysler minivans were done under the Chrysler nameplate. In Europe, Chrysler began sales of the Voyager in 1988. As with its first generation counterpart, the second-generation Chrysler Voyager is largely related to the Dodge Caravan in trim. Initially produced by St. Louis Assembly, in 1992, Chrysler began sourcing the Voyager from Eurostar in Austria. In 1994, the Chrysler Voyager began production with a 2.5L VM Motori diesel engine; as of 2017, these are the only diesel-powered Chrysler minivans. 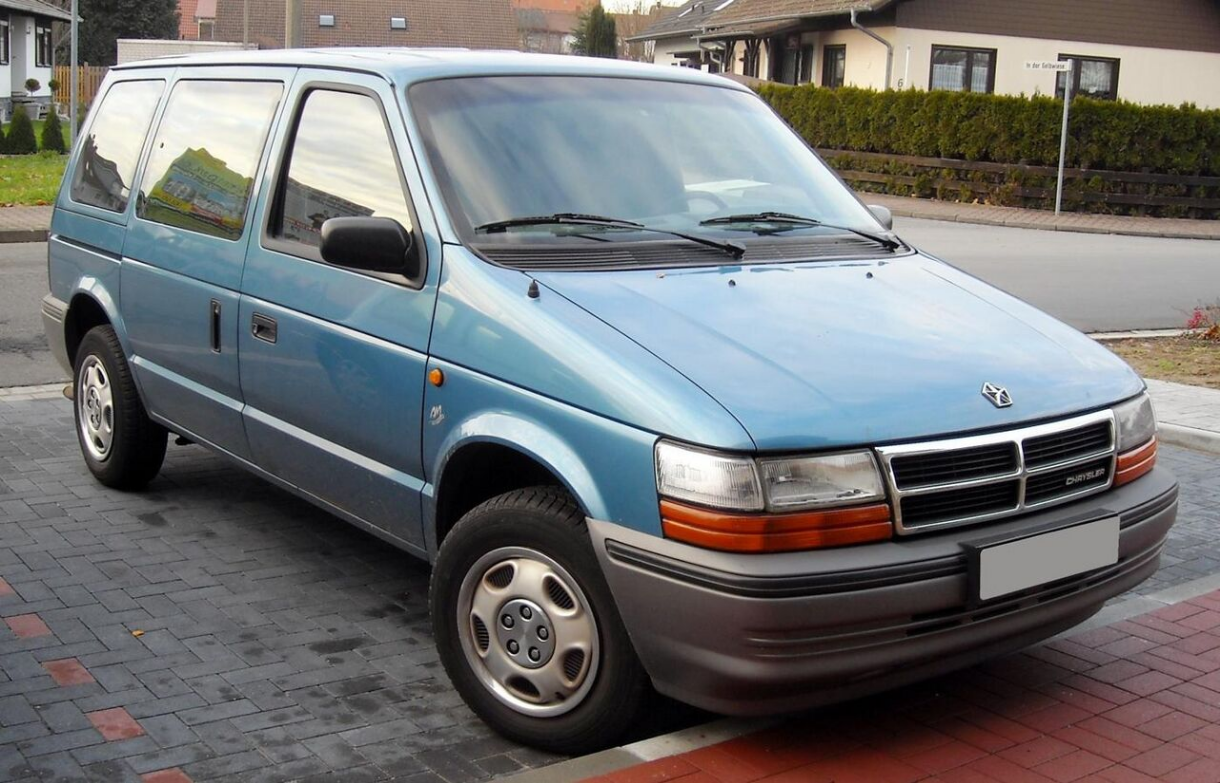 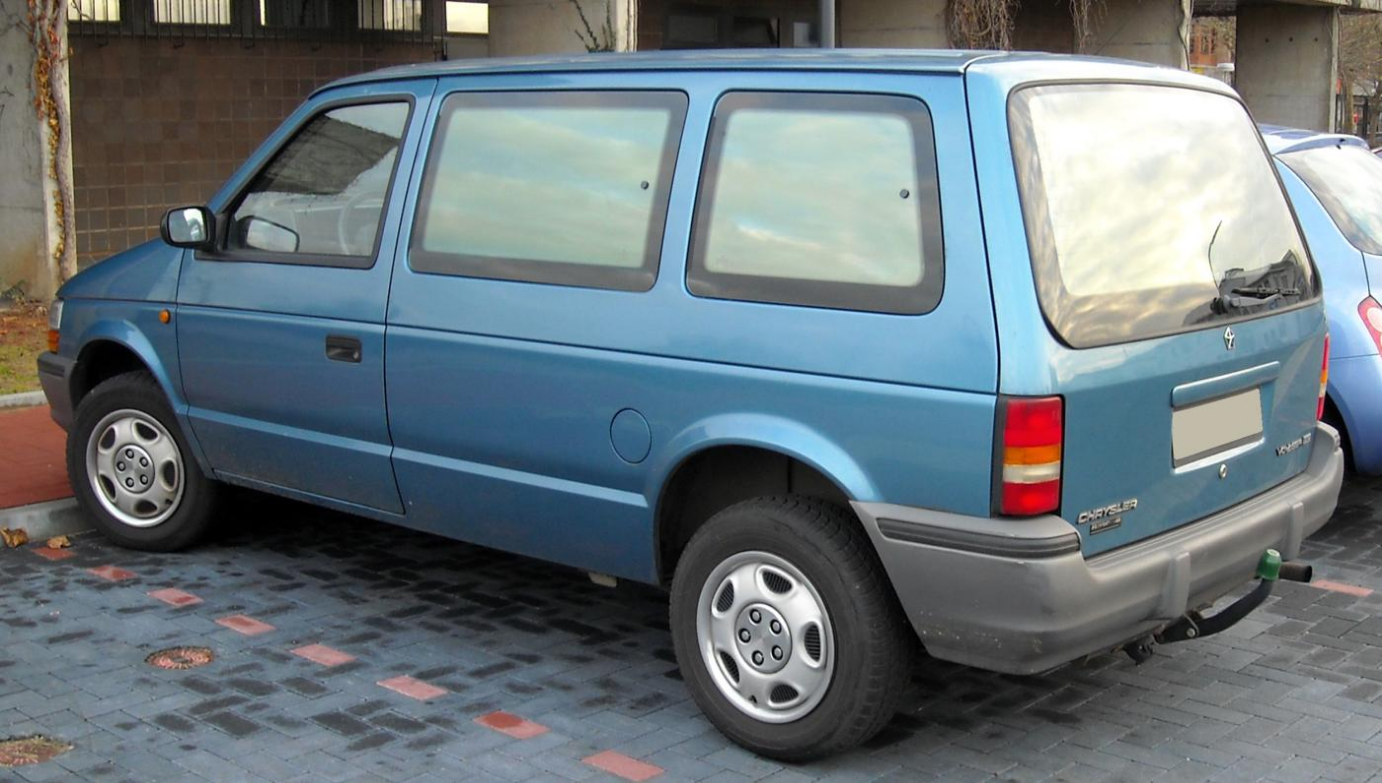 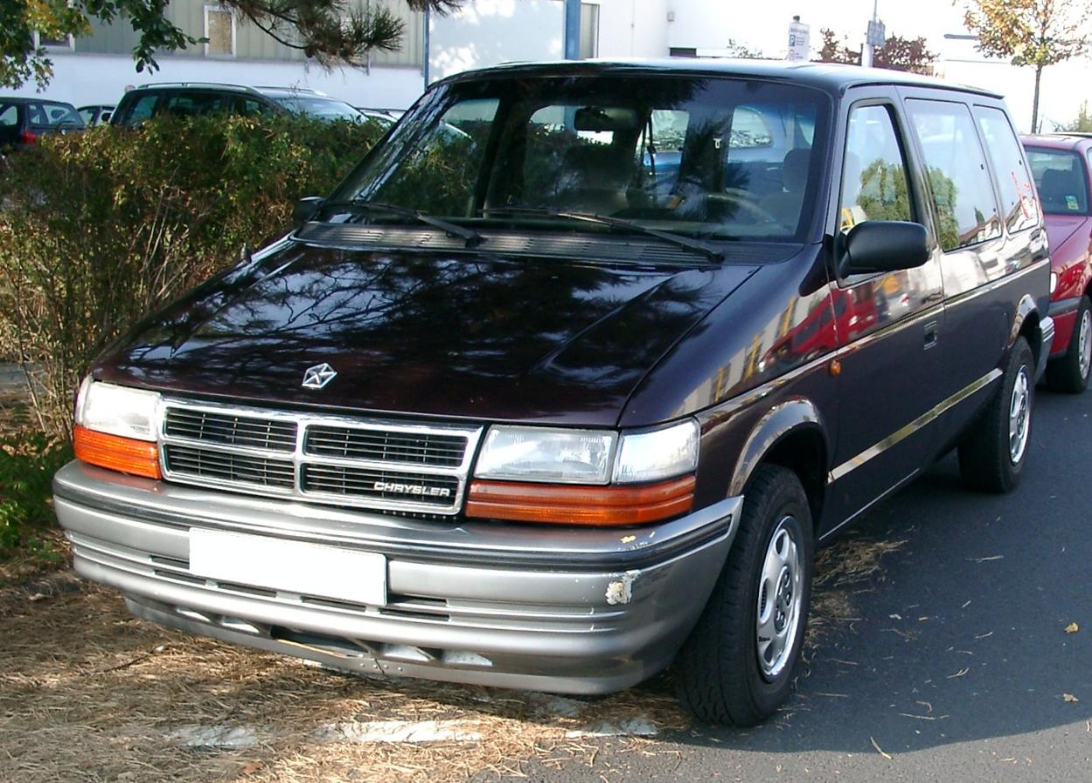 In a change from the first-generation vans, all SE and LE vans were offered with 7-passenger seating, regardless of wheelbase.[1] LE-trim vans included many features available on SE-trim vans as option as standard, along with additional sound insulation; long-wheelbase ("Grand") vans and all-wheel drive models were equipped with 15-inch wheels.[1]

The top trim in the Caravan and the Voyager was the ES (for both versions of the Caravan) and the LX (for the short-wheelbase Voyager). Sharing its model features with LE-trim models included as standard equipment,[3] the LX/ES trims served as a cosmetic upgrade similar to namesake trims in the Plymouth Acclaim and Dodge Spirit. In place of woodgrain trim, the LX was given color-keyed two-tone exterior; the ES was given nearly monochrome trim (as with the Dodge Spirit, ES-trim Caravans were fitted with white-painted wheels). In line with the European Chrysler Voyager, the Dodge Caravan ES was not fitted with a stand-up hood ornament (with a body-color Chrysler Pentastar affixed directly onto the hood).

Following the production of CNG-fuel (compressed natural gas) van prototypes derived from the Dodge Ram Van in 1992, Chrysler began production of a CNG-fuel version of its minivan in 1994.[4] Using the 3.3L V6 and 4-speed Ultradrive transmission powertrain, the CNG minivans underwent several modifications to accommodate the change in fuel. Along with modifications to the engine valvetrain, four 3000PSI CNG fuel tanks were added to the vehicle, taking the place of the spare tire well and gasoline tank, holding the energy equivalent of 8.5 gallons of gasoline.[4]

The Chrysler TEVan is a battery electric vehicle developed between Chrysler and the Electric Power Research Institute.[5] First unveiled as a concept in 1992, an unknown number were produced between 1993 and 1995 (between 56 and 80).[5] Deriving its name from the original T-115 codename for the Chrysler minivans and EV, the TEVan was sold nearly exclusively to fleet buyers; the vehicle was based on a standard-wheelbase five-passenger Dodge Caravan.

The TEVan used a 27 hp, 65 hp max (48 kW) Separately-Excited GE DC traction motor coupled to a two-speed FWD trans-axle that featured Hi, Lo, Reverse and Park. The owner's manual referred to it as a 'semi-automatic transmission' although it used a clutch. The motor controller was also manufactured by GE.

As a successor, Chrysler would produce the 1997-1999 EPIC (Electric Powered Interurban Commuter Vehicle), based upon the third-generation minivans.

More
©Text is available under the terms and conditions of the Creative Commons-Attribution ShareAlike (CC BY-SA) license; additional terms may apply. By using this site, you agree to the Terms and Conditions and Privacy Policy.
Upload a video for this entry
Information
Subjects: Transportation
Contributor MDPI registered users' name will be linked to their SciProfiles pages. To register with us, please refer to https://encyclopedia.pub/register :
HandWiki
View Times: 54
Entry Collection: HandWiki
Revision: 1 time (View History)
Update Date: 28 Nov 2022
Table of Contents
1000/1000
Hot Most Recent